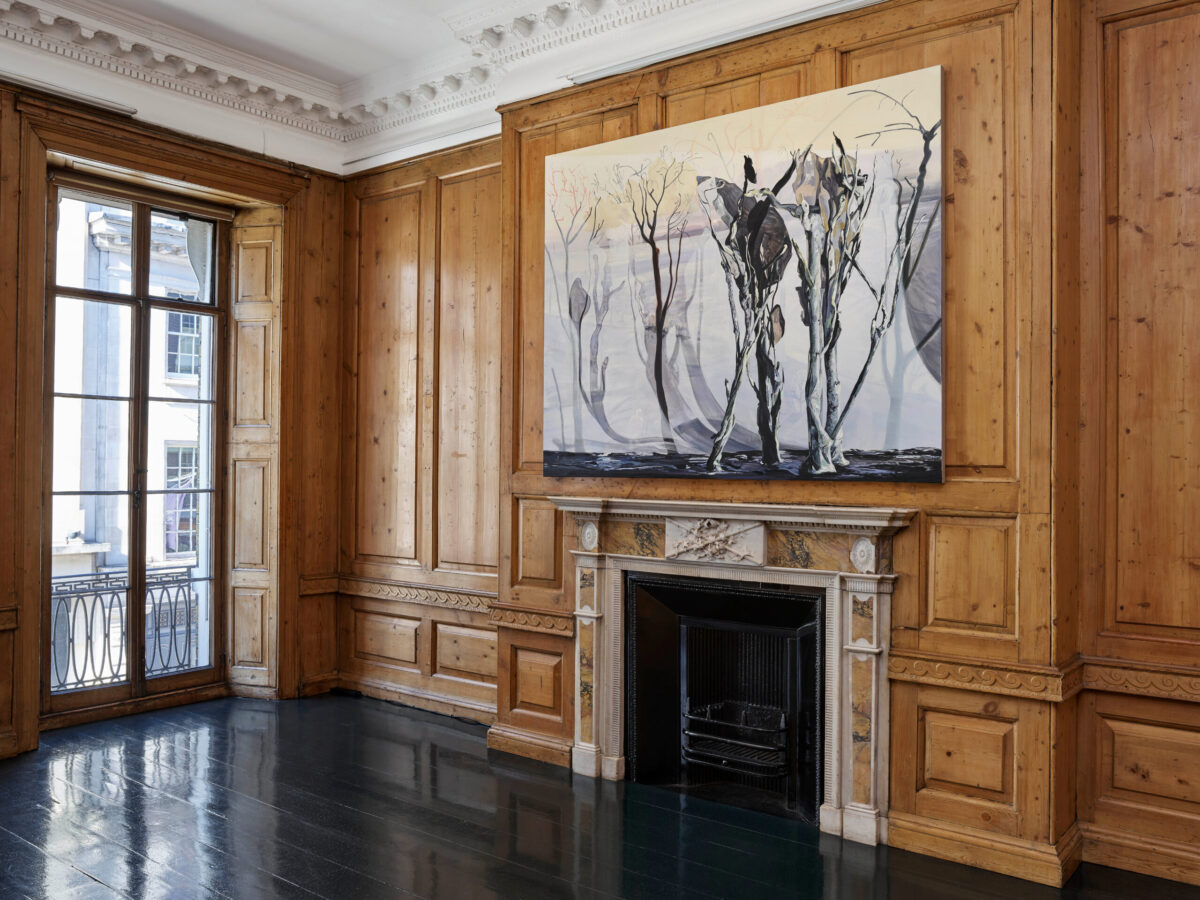 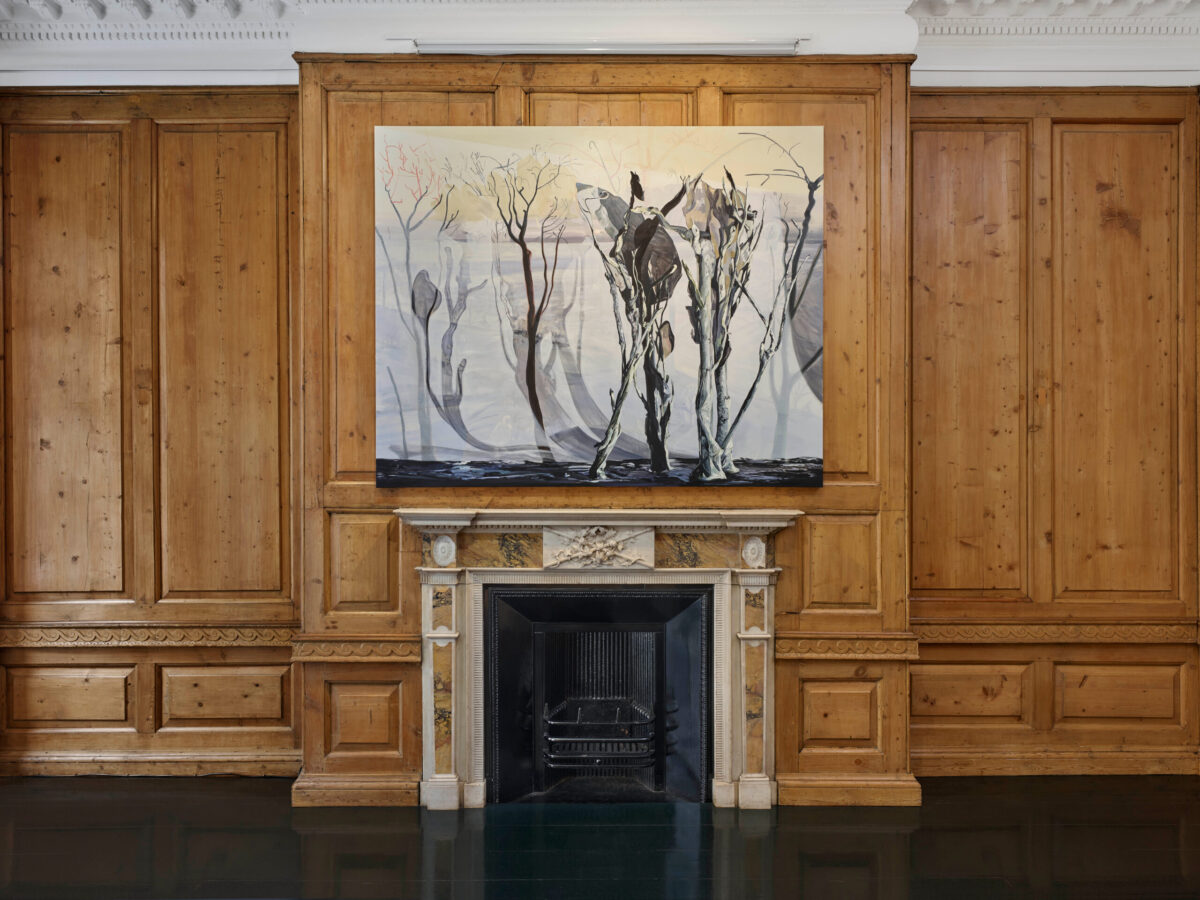 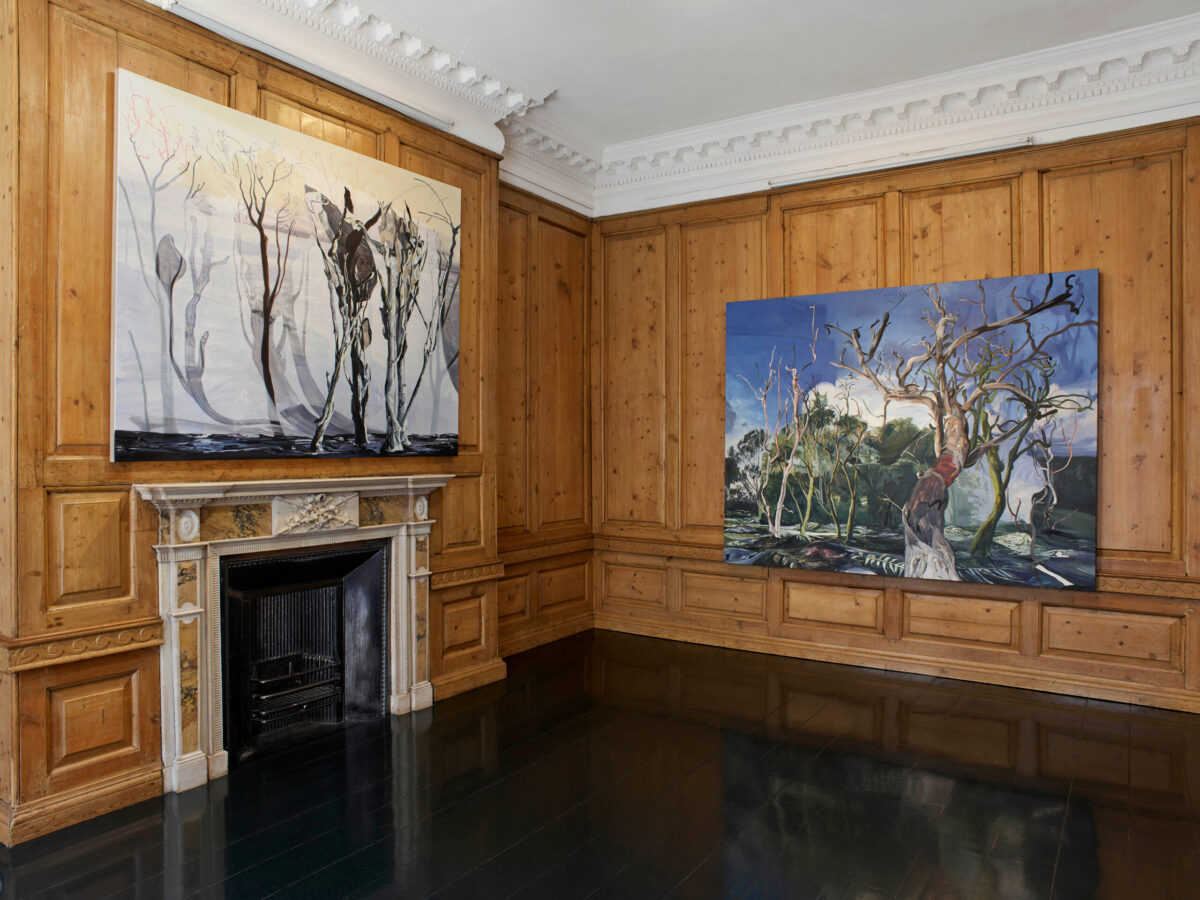 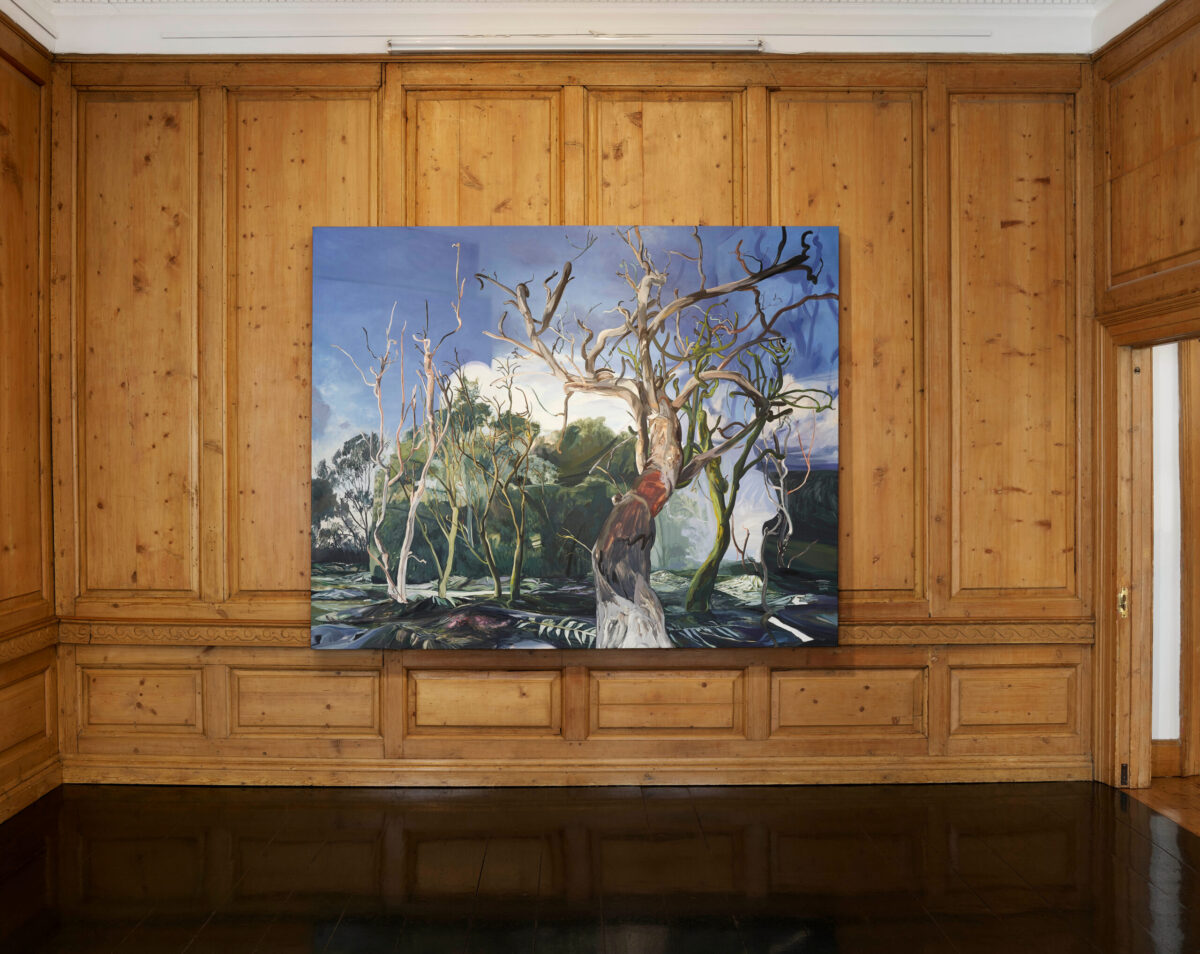 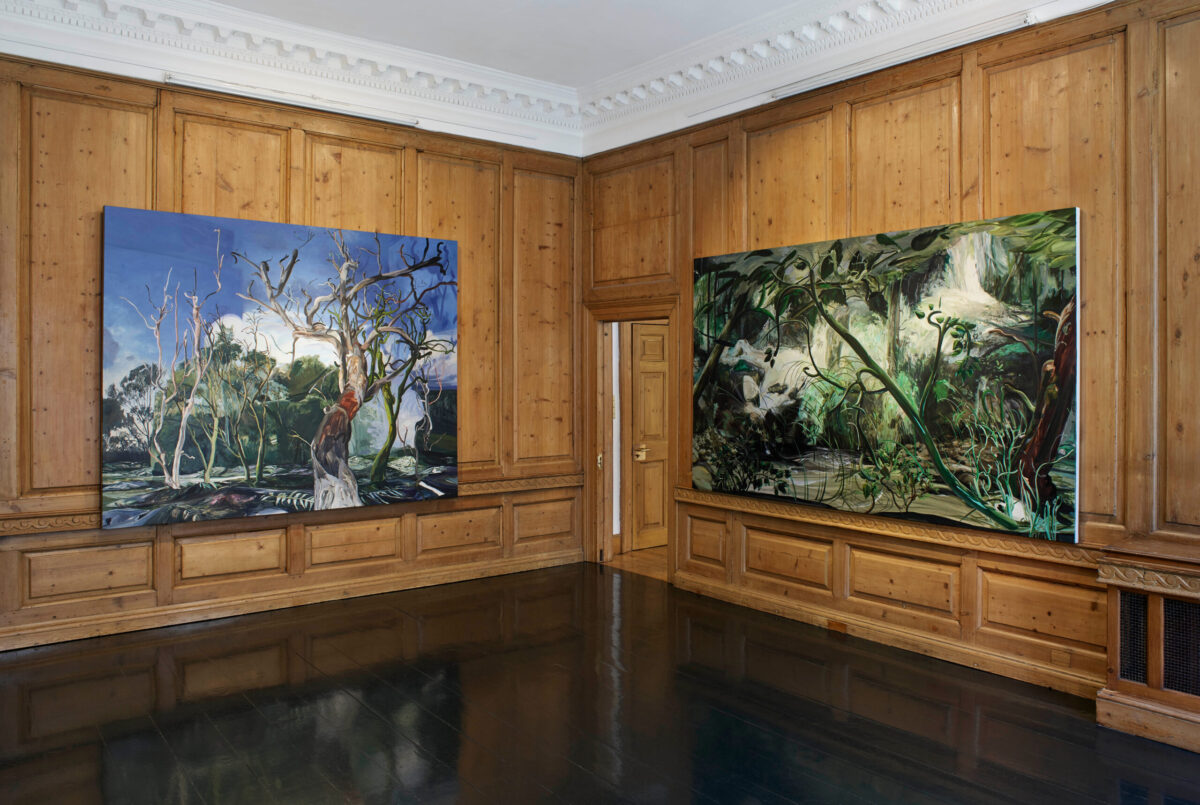 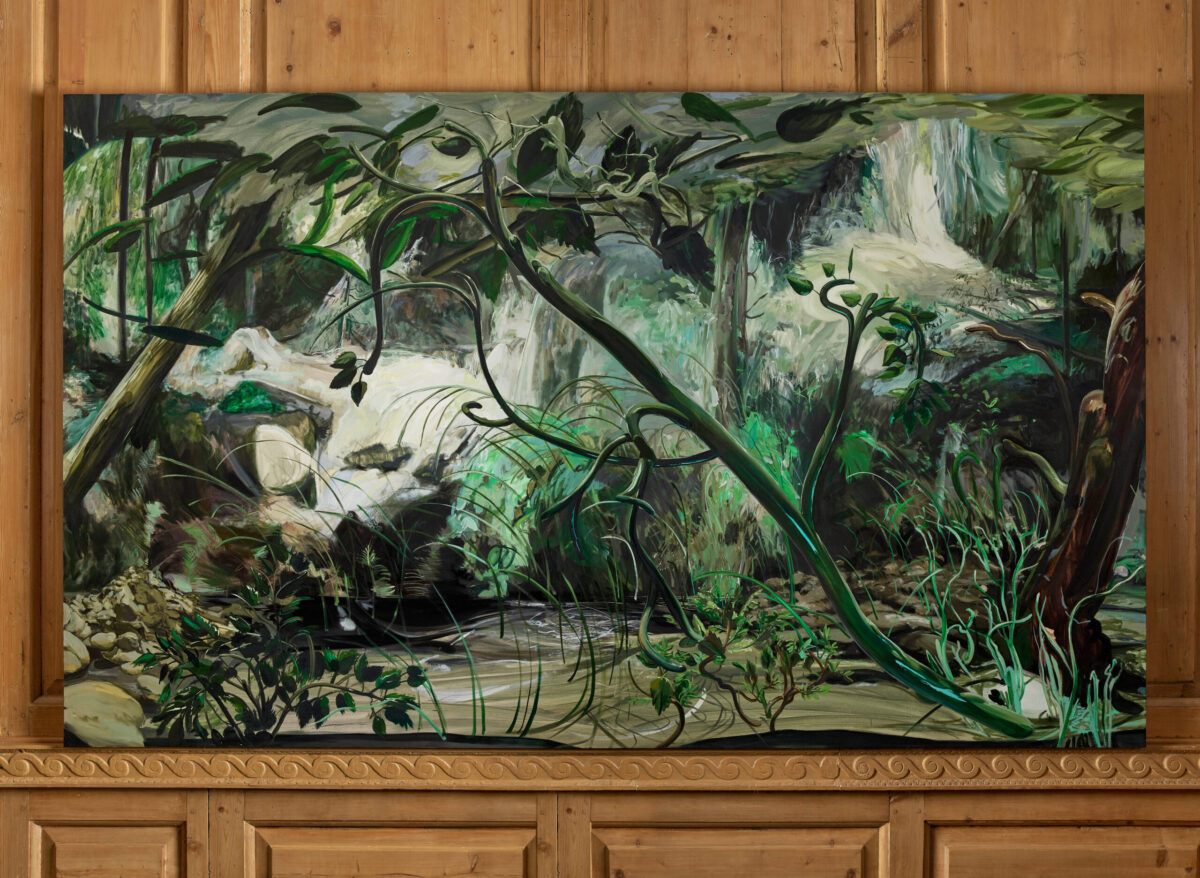 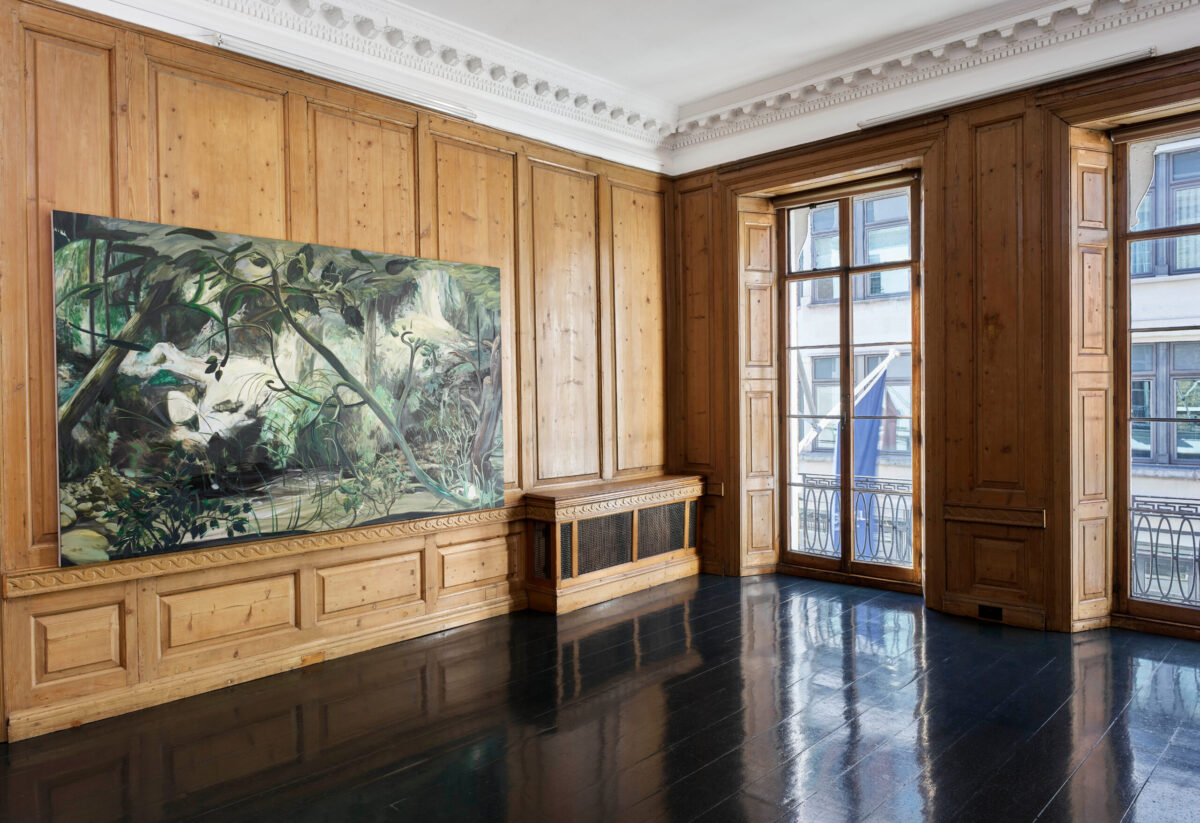 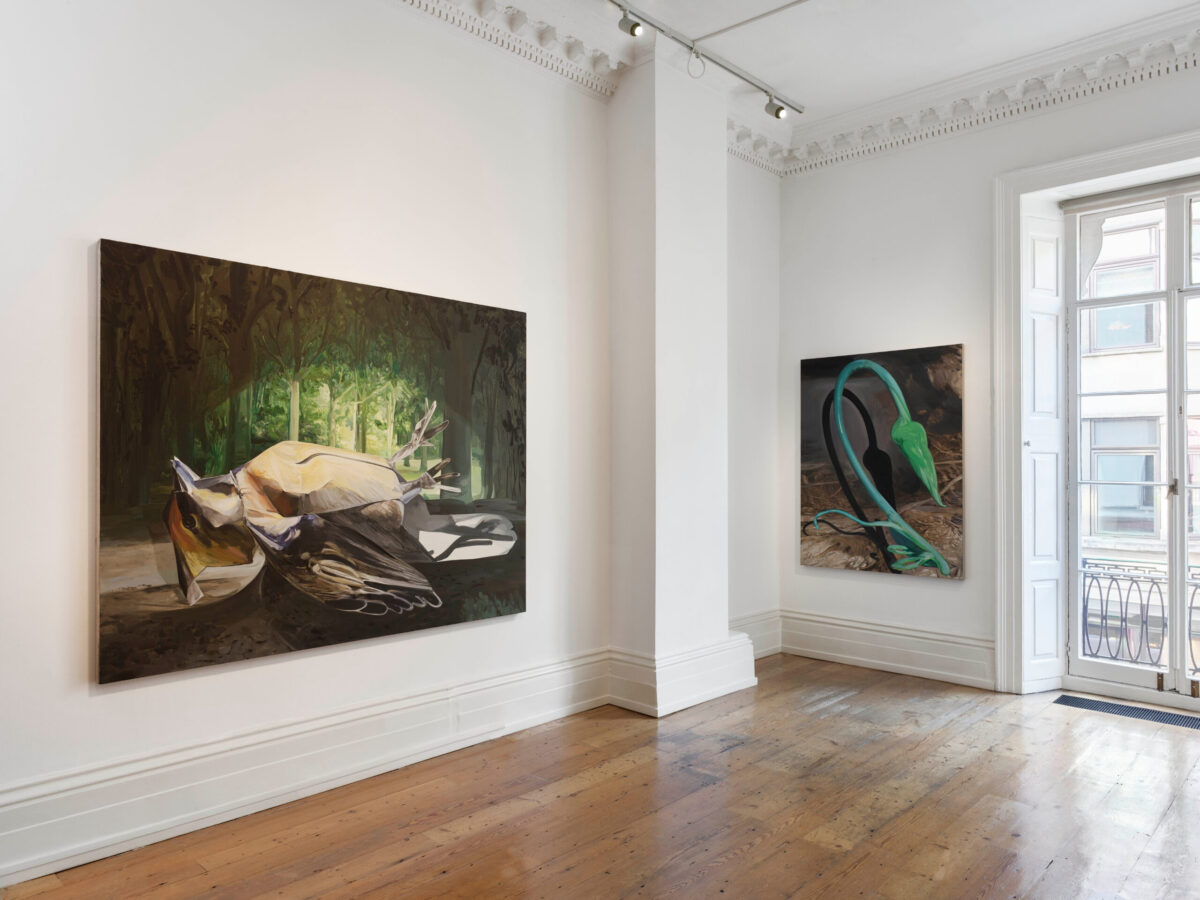 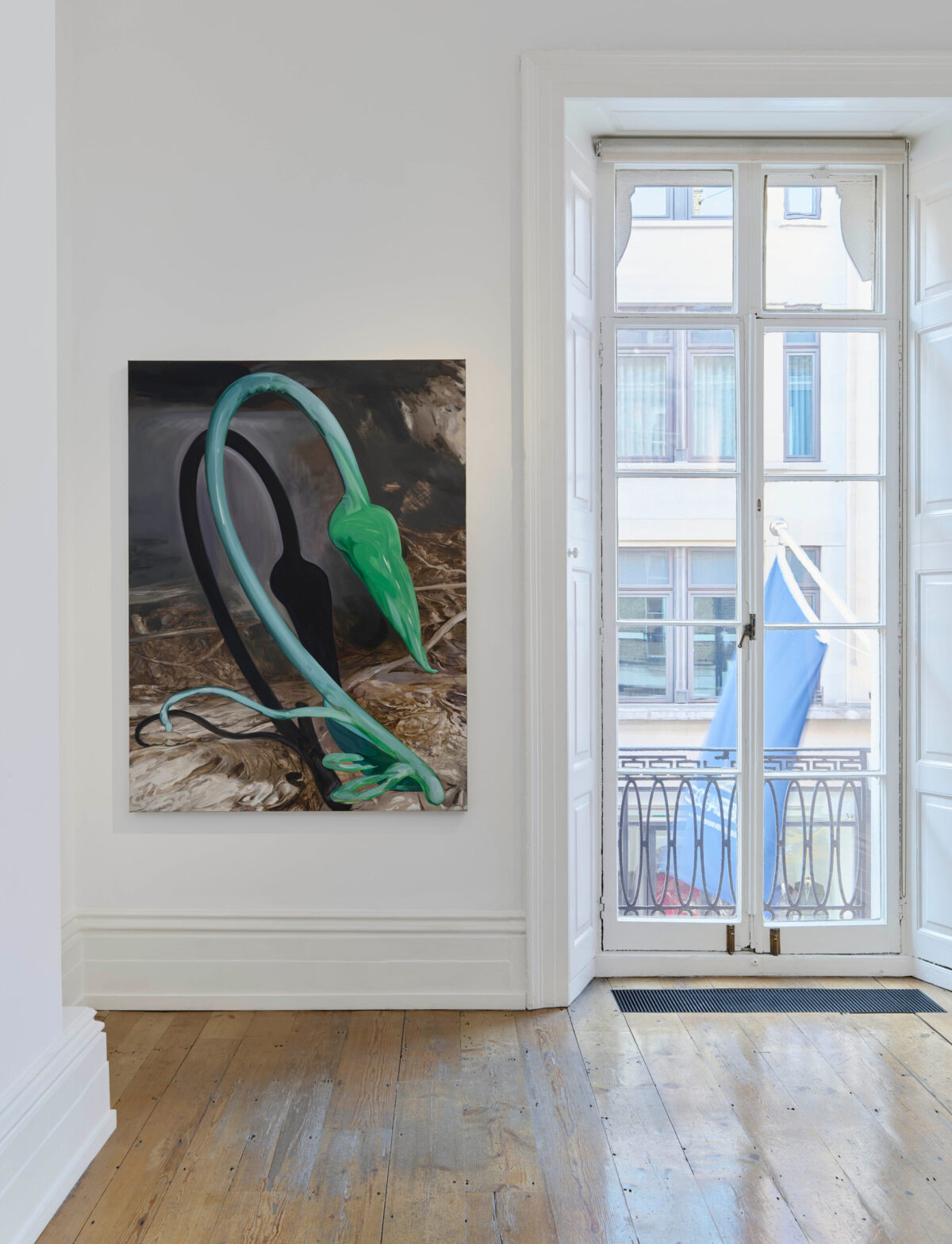 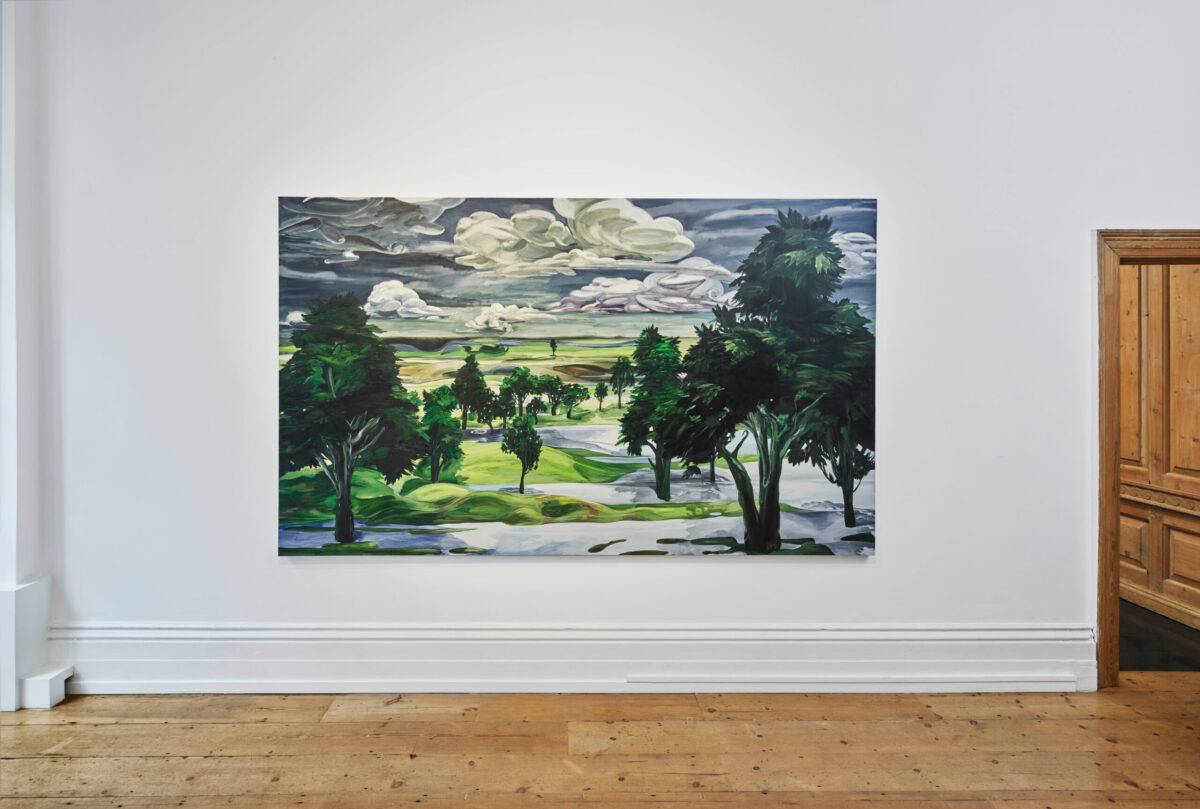 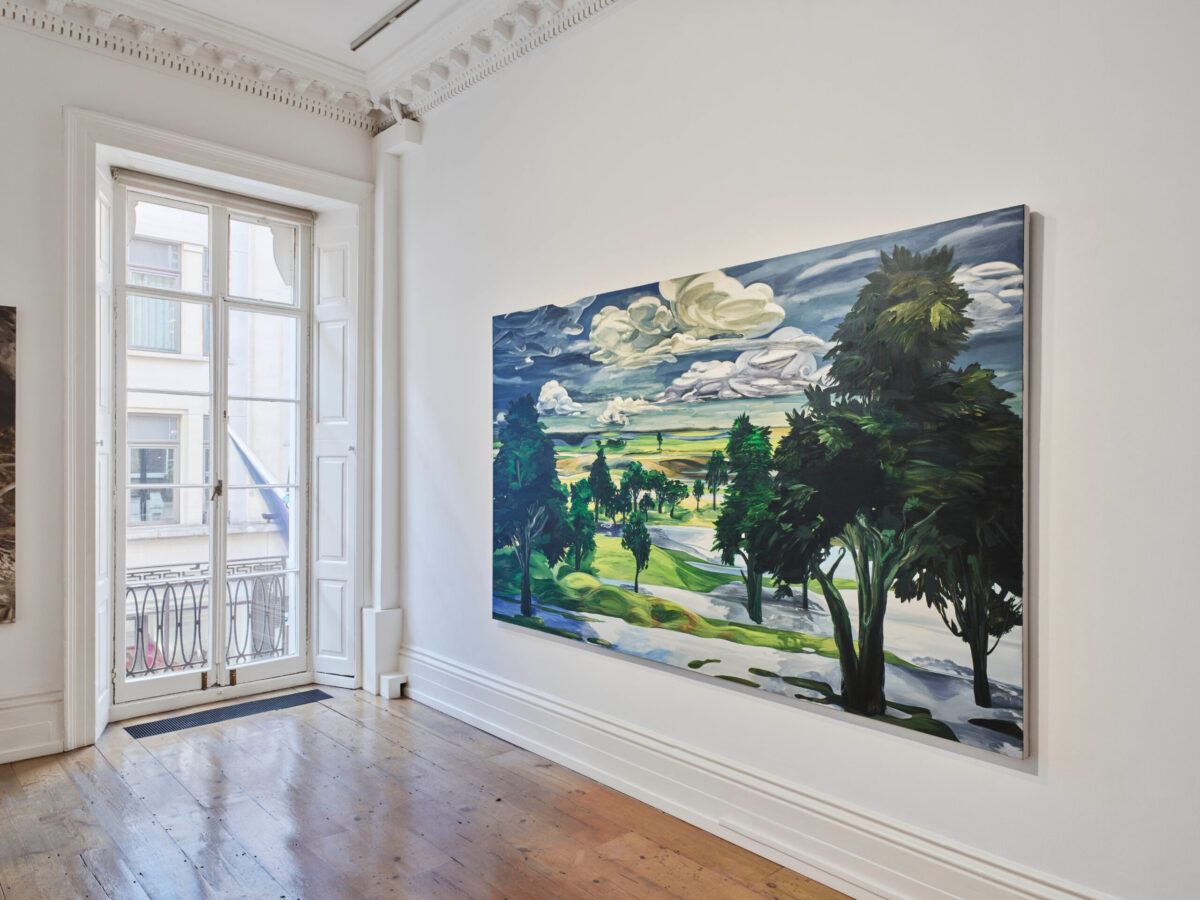 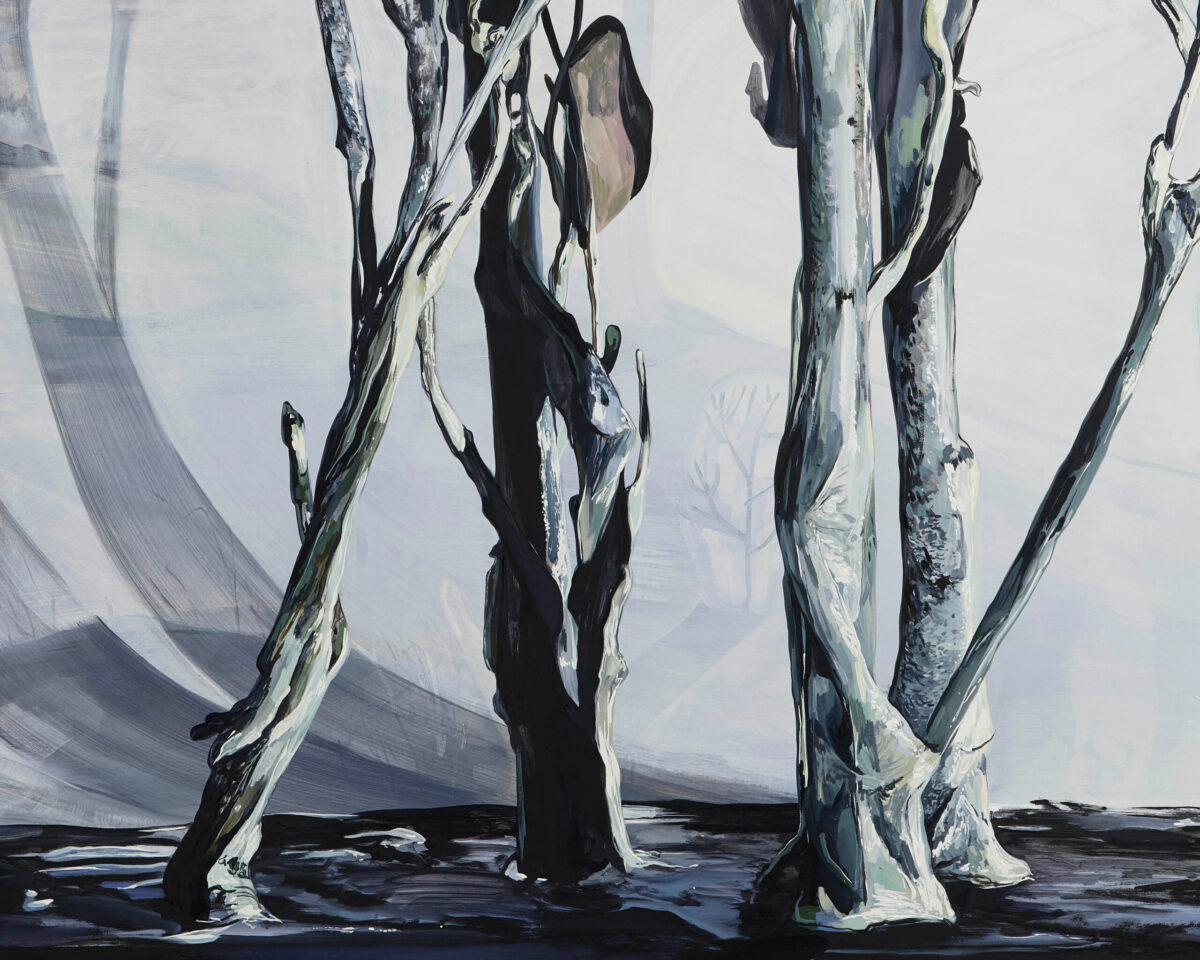 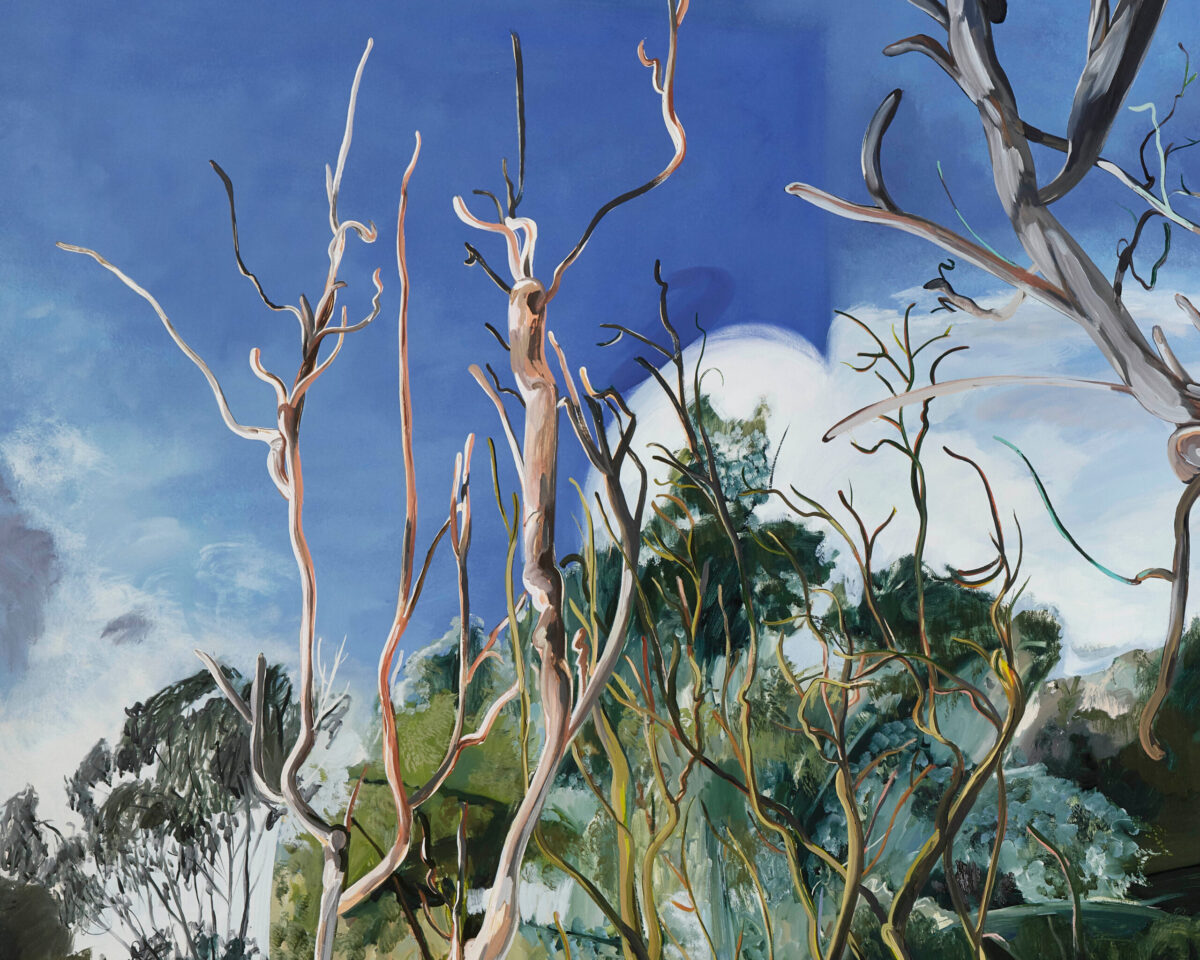 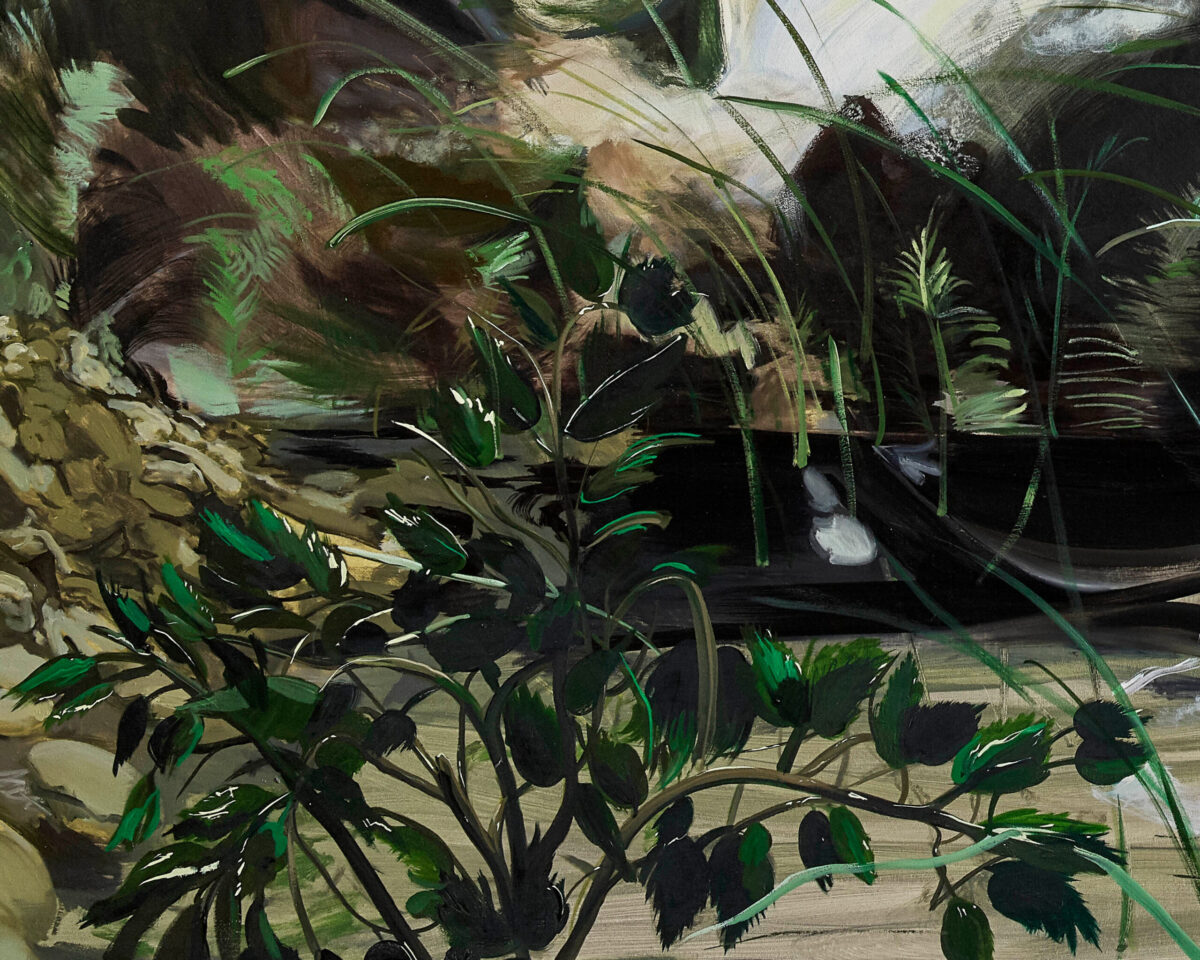 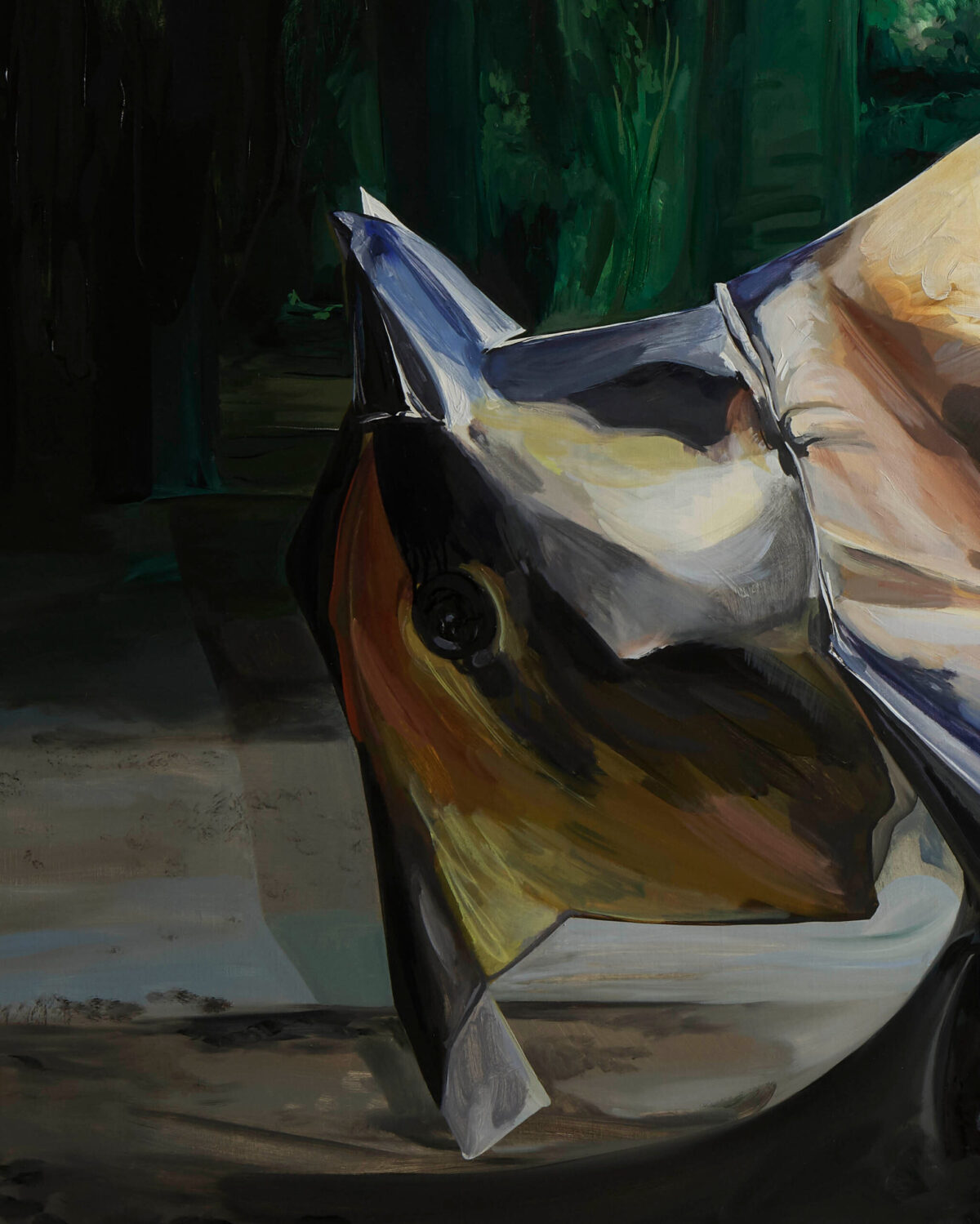 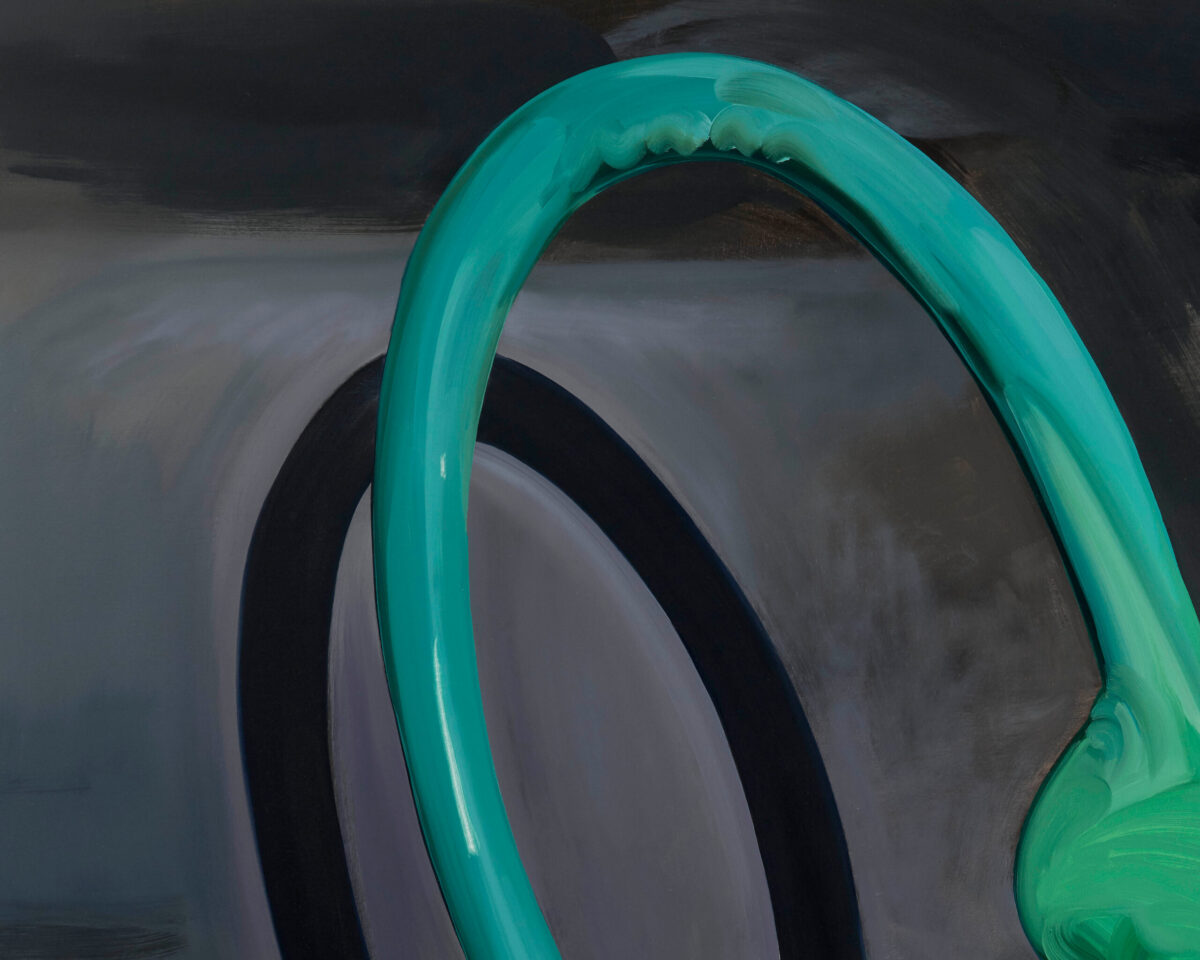 And God said, Let us make man in our image, after our likeness: and let them have dominion over the fish of the sea, and over the fowl of the air, and over the cattle, and over all the earth, and over every creeping thing that creepeth upon the earth.

The exhibition comprises a series of large oil on linen works, painted with a seductive fluidity and bravura. They are, both in their subject and in-and-of-themselves, contemporary landscape paintings.

Contemporary, here, signifies a strange mixture of the attractive, the artificial and the unsettling. Amidst the lusciousness of the brushwork and the vibrancy of the paint, there is a jarring, even quietly sinister quality about Webster’s landscapes. They subtly evoke, perhaps, the sensibility of an arthouse horror movie. Beneath the pleasant surface, something is wrong.

To the eye conditioned by the illusionistic traditions of Western painting, it is the sense of depth in the works that is most clearly awry, scrambled as it is by passages of unexpected flatness and weird interrelations between the fore, middle and back grounds.

In Natural History the immediate distraction of the densely painted foliage in the foreground gives way to an oddly flat and close vista of a waterfall, that, within the logic of the painting, we realise is probably a painted backdrop. In Dove Hollow, the constructed quality of the depicted space is revealed by shadows of branches cast improbably onto a patch of fake sky and an awkwardly out-of-place screen of ersatz greenery. The conceit becomes explicit in Background’s Backdrop in which an aggressively lit collection of bare, silvery trunks cast warped shadows onto a backdrop behind them.

Webster’s paintings are, most immediately, paintings of dioramas she constructs in her studio from animal figurines, plastic foliage and backdrops of collaged elements of canonical landscape paintings. More expansively they are paintings that remember the history of the landscape painting and speak also of the often messy and pathetic interface between meatspace and the digital realm.

Weltlandschaft, (transl. ‘world landscape’) the show’s title, is a term that was coined to describe a trend that emerged in some 16th century painting in the Low Countries and Germany. These works depicted imaginary, panoramic landscapes seen from God’s-eye view that encompassed the gamut of topographical elements; mountains, lowlands, coasts, waters and buildings. Coinciding with the early years of the Age of Exploration and thus colonization, it was a development similarly fuelled by the prejudice that nature was something to be measured and tamed by human exceptionalism. The world as property. Interestingly the genre’s most prominent example is Pieter Bruegel the Elder’s Landscape with the Fall of Icarus, in which, famously, Icarus’ fatal fall into the sea is an incidental, almost unnoticed detail.

Half-a-millennia later the fatal consequences of humanity’s hubris are writ all over the land, air and sea. Yet the deadpan implication of Webster’s paintings is that we’d rather stay cocooned in a world of cheap fiction. Like the obsessive fans of Chinese livestreaming ‘stars’ who choose to believe in the backdrops depicting luxury penthouses and five-star environments that frame the performed lives of their idols, we’d rather not look behind the curtain.

She will also participate in the group exhibition Stockholm Sessions at Carl Kostyál, Stockholm in May 2021.