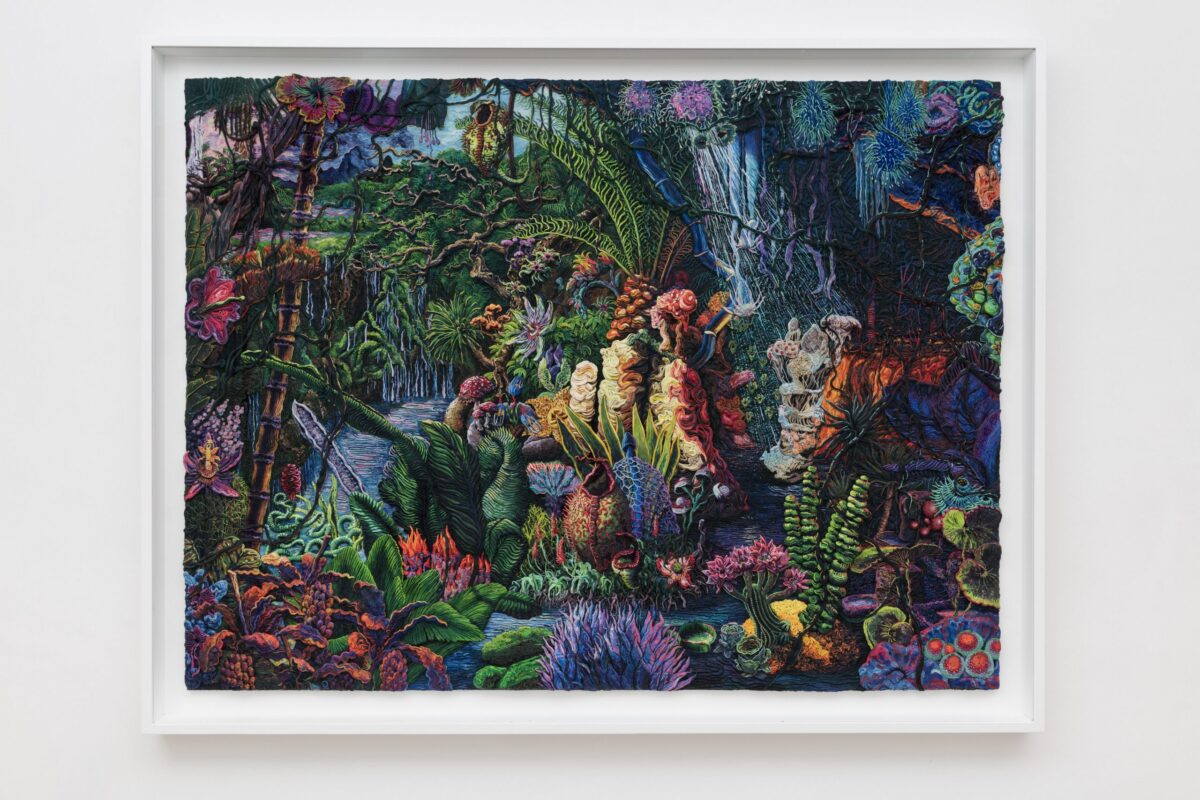 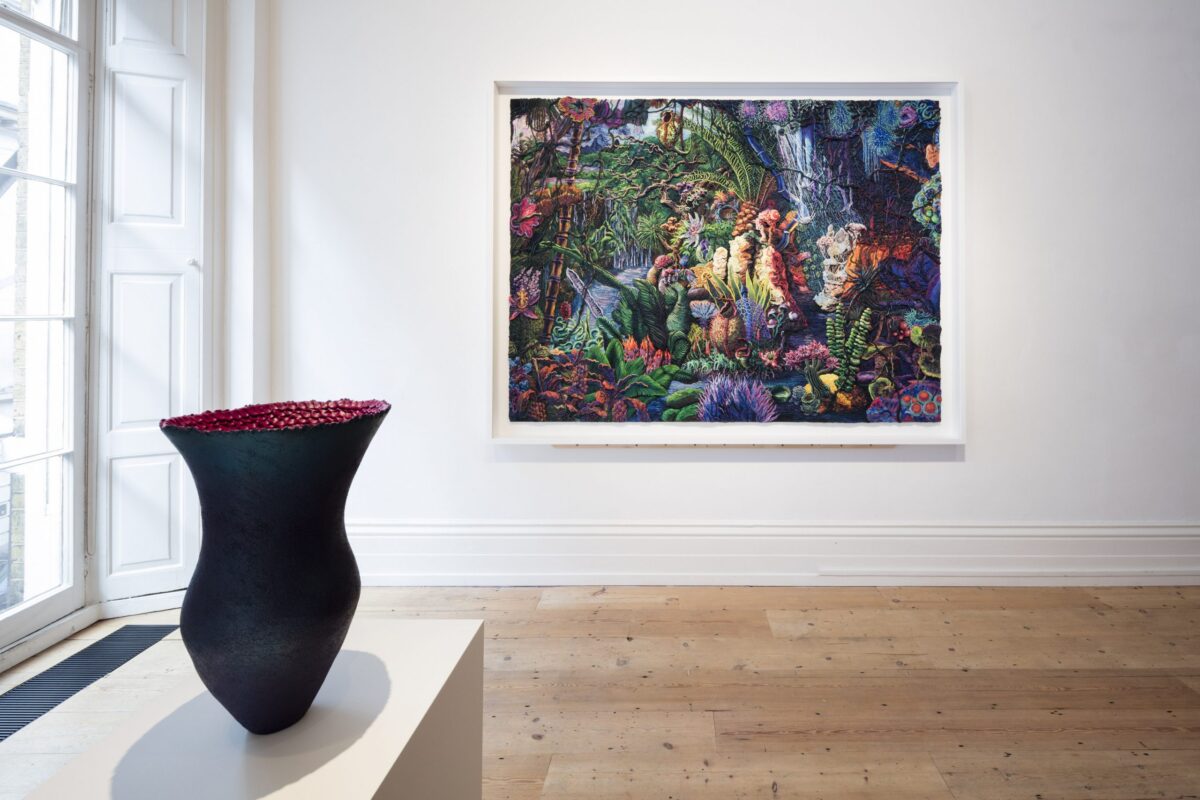 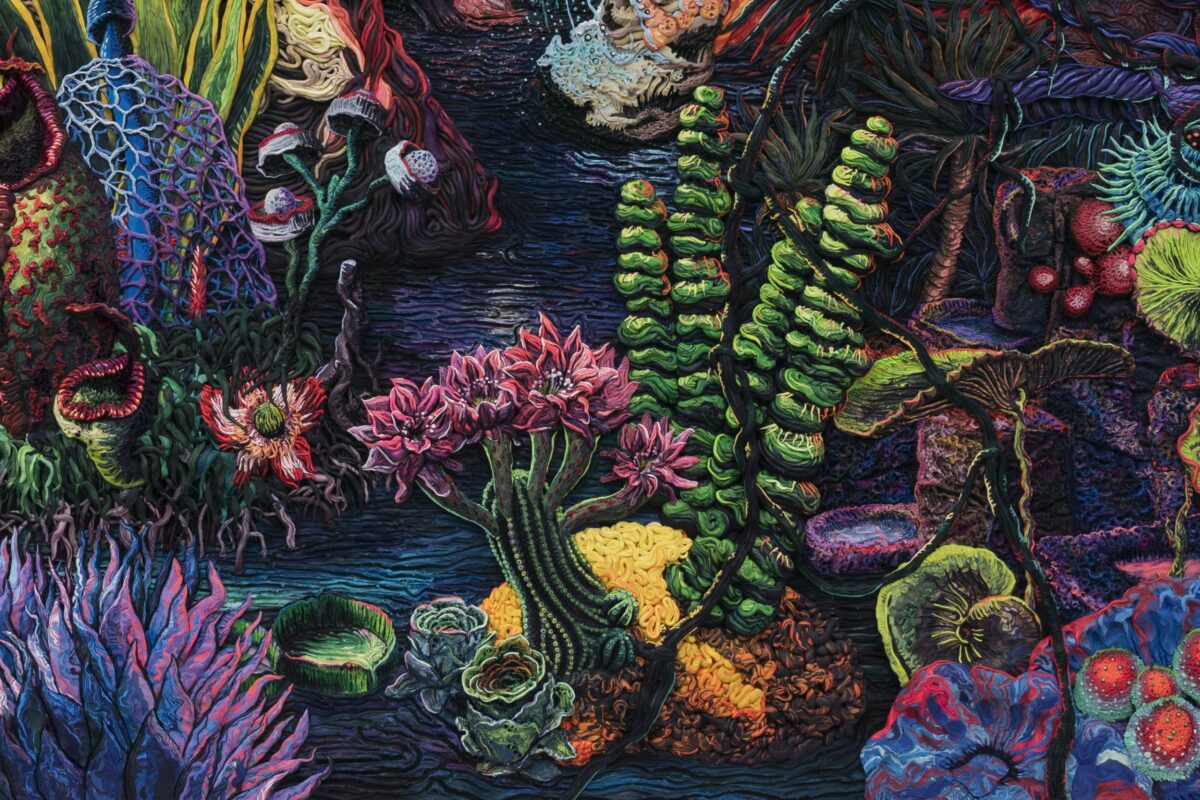 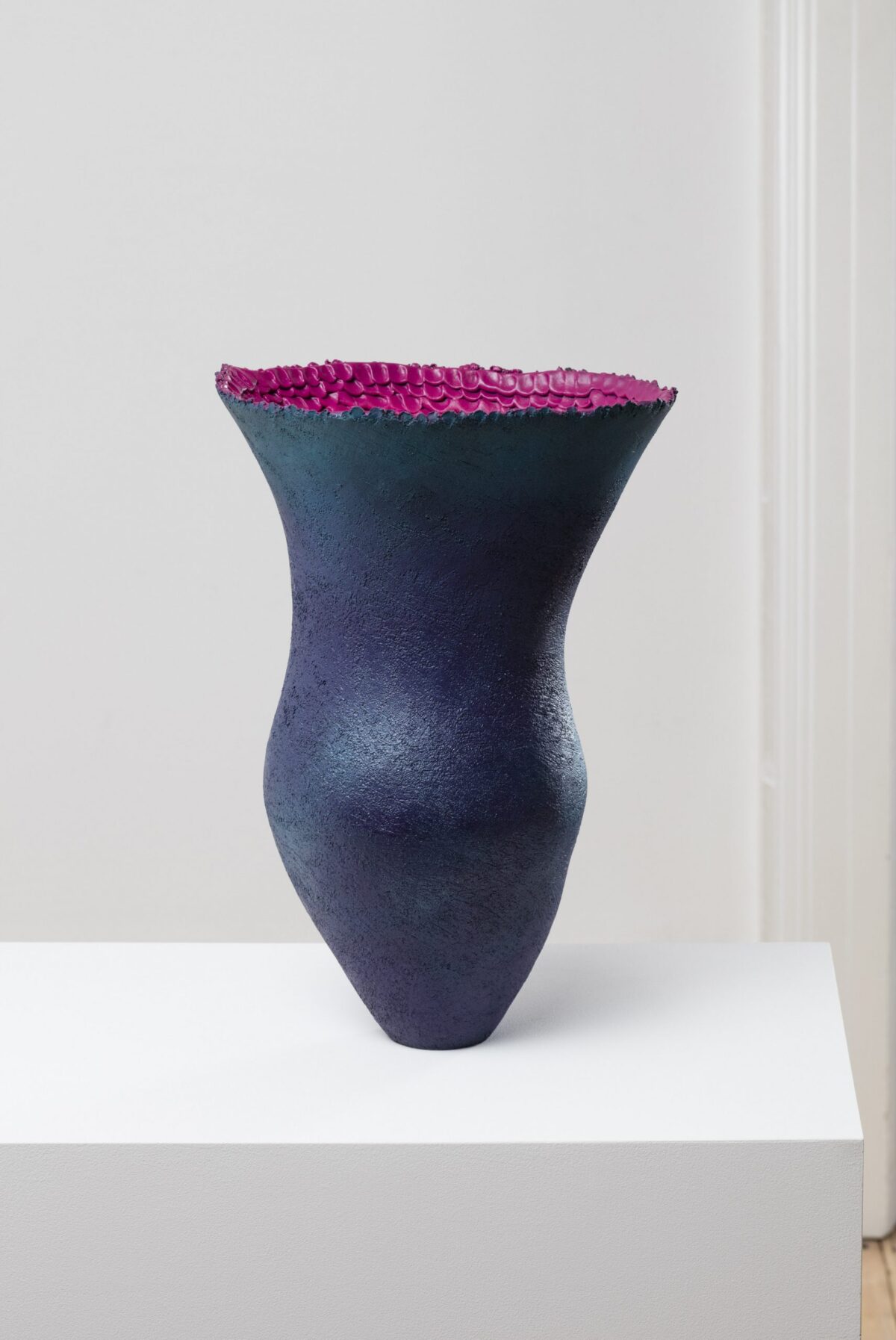 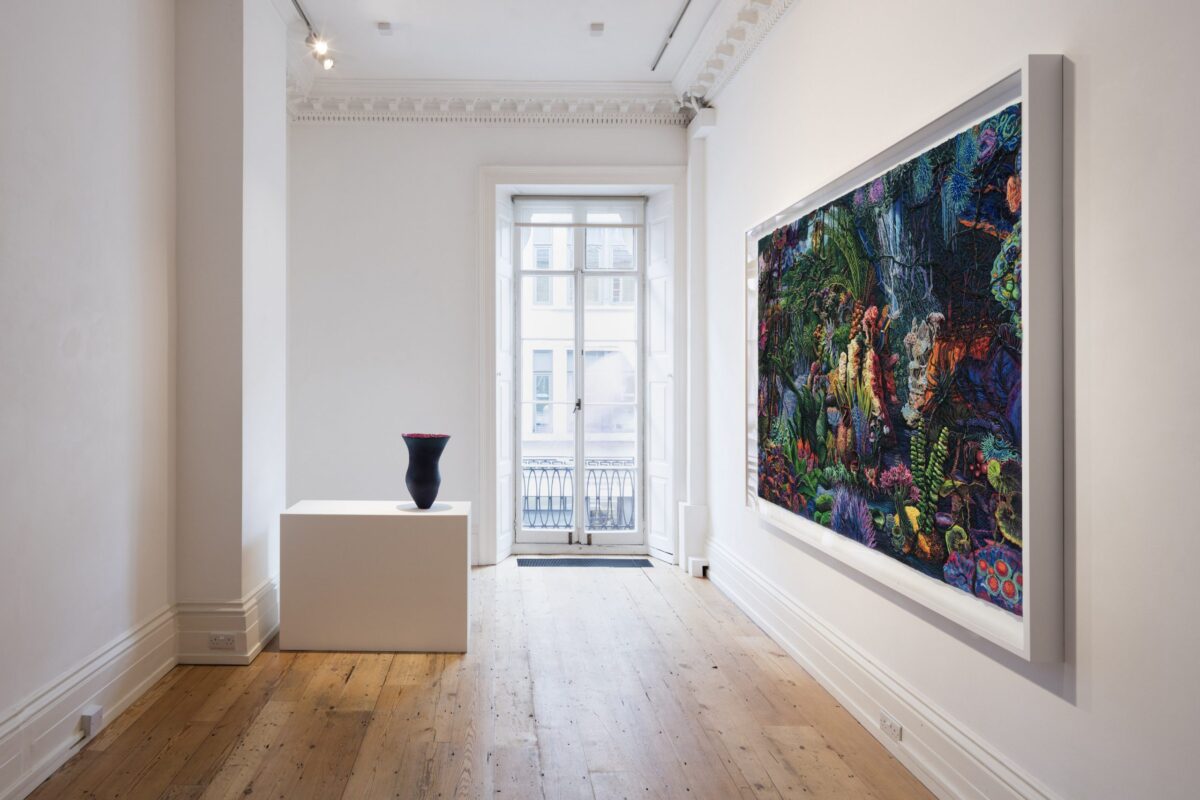 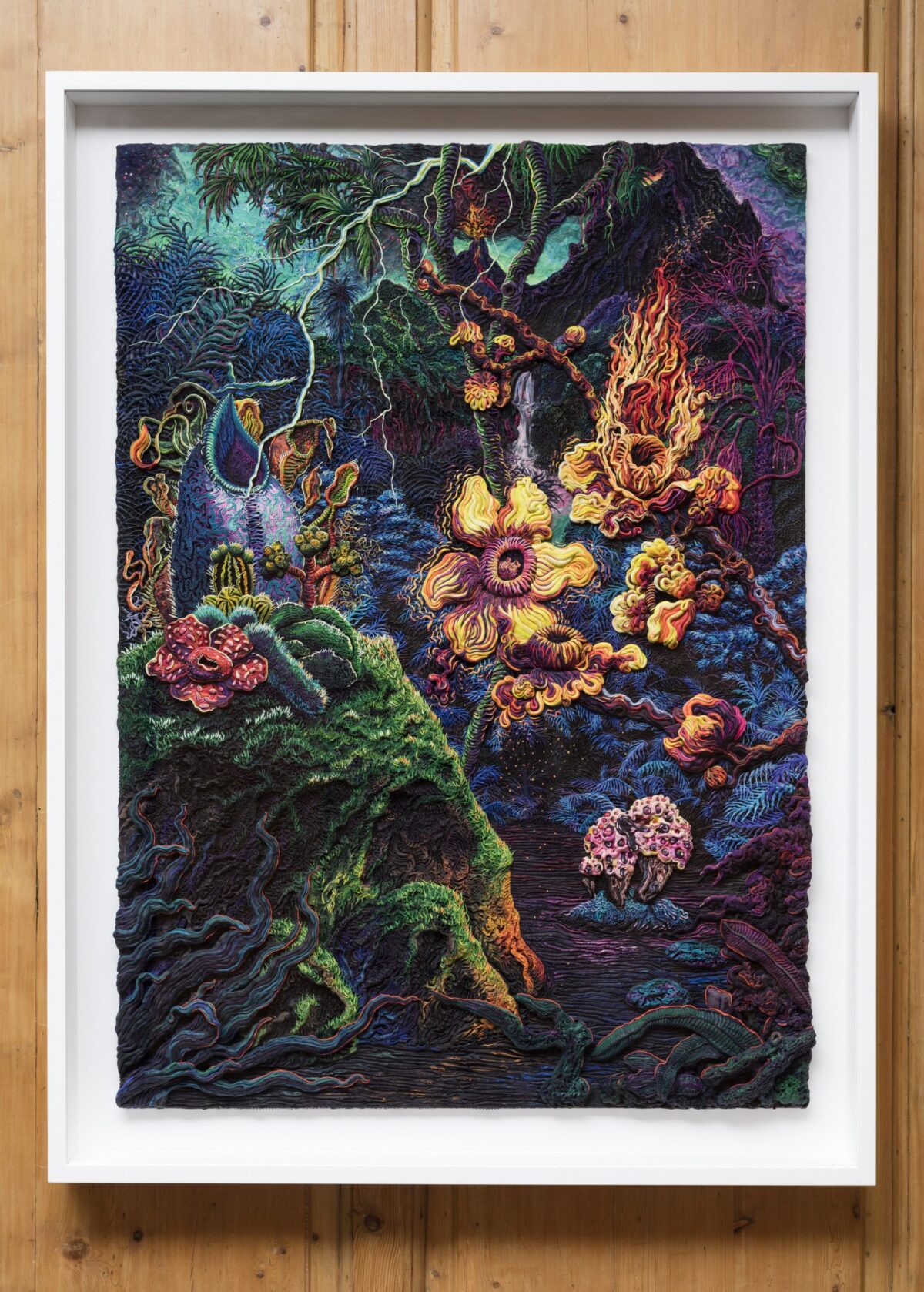 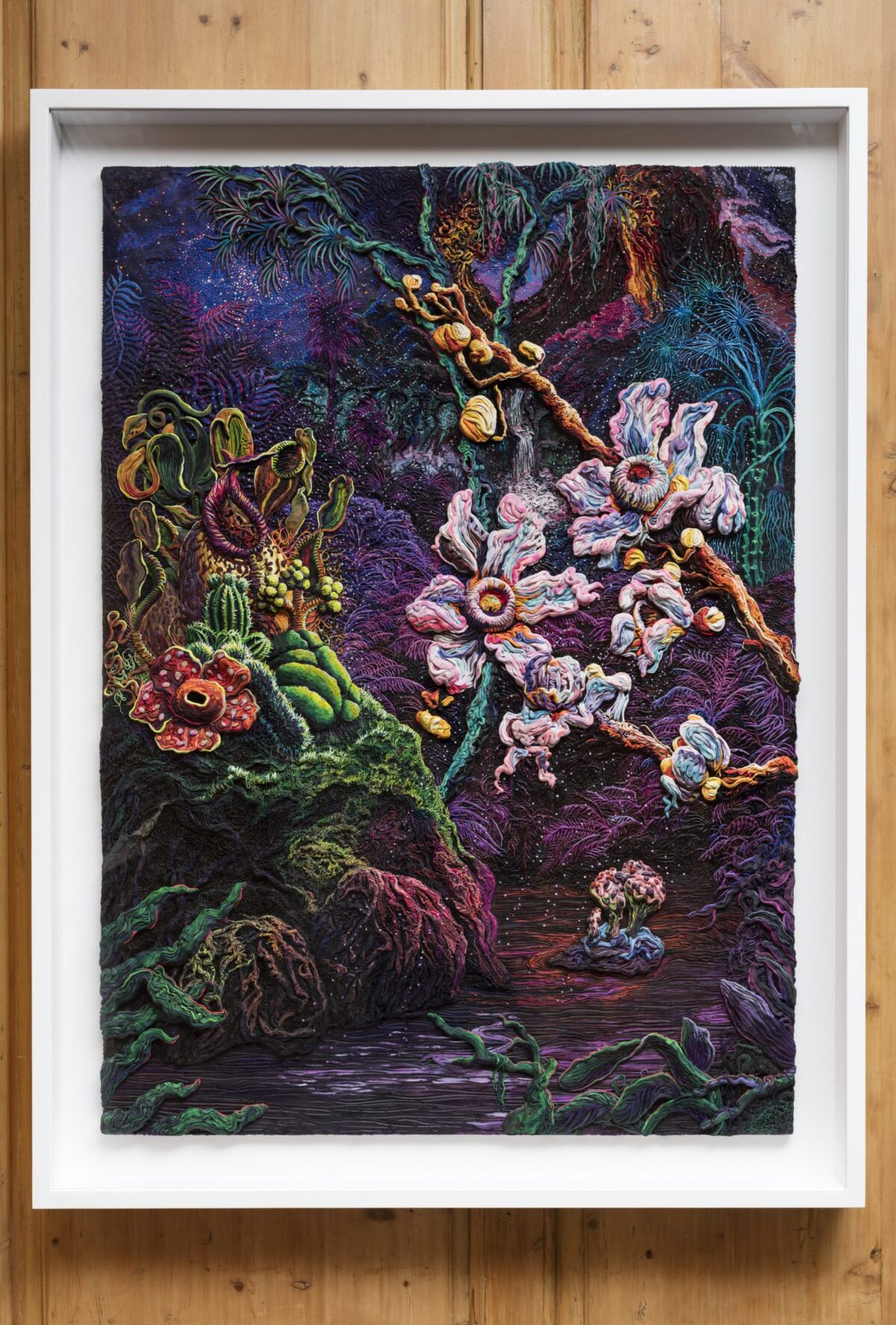 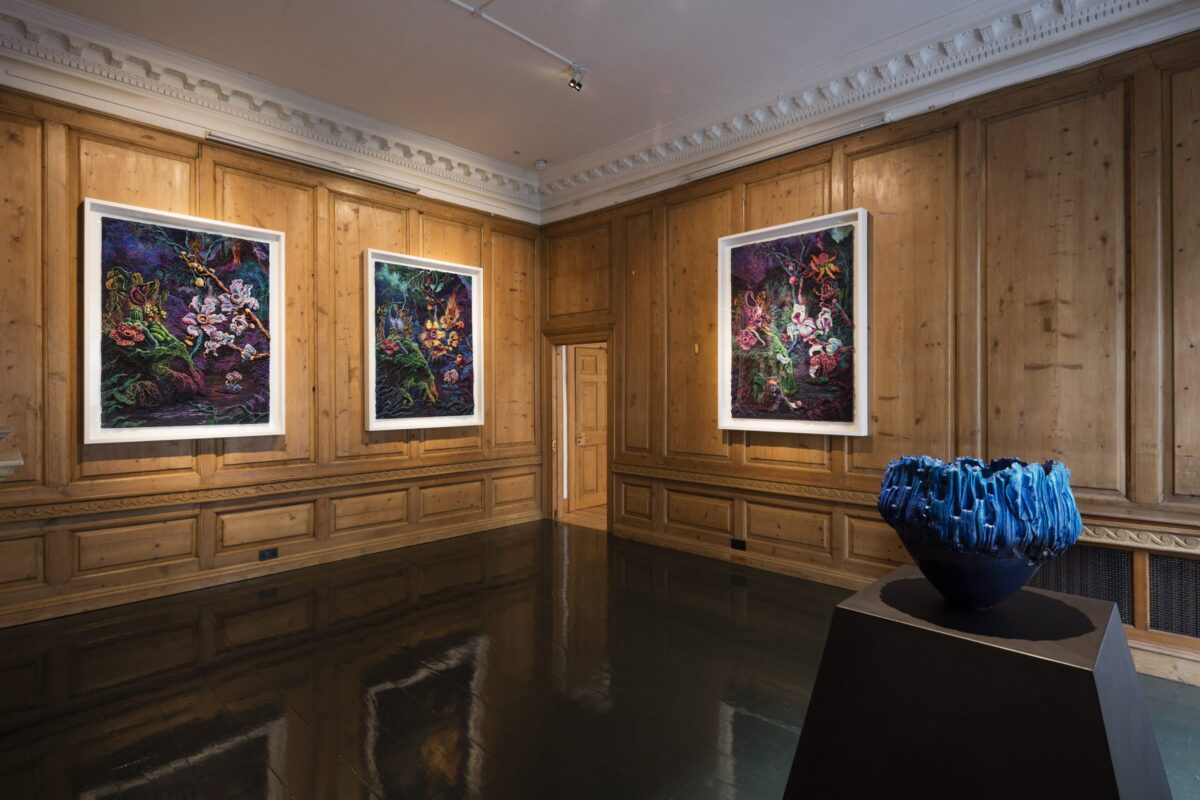 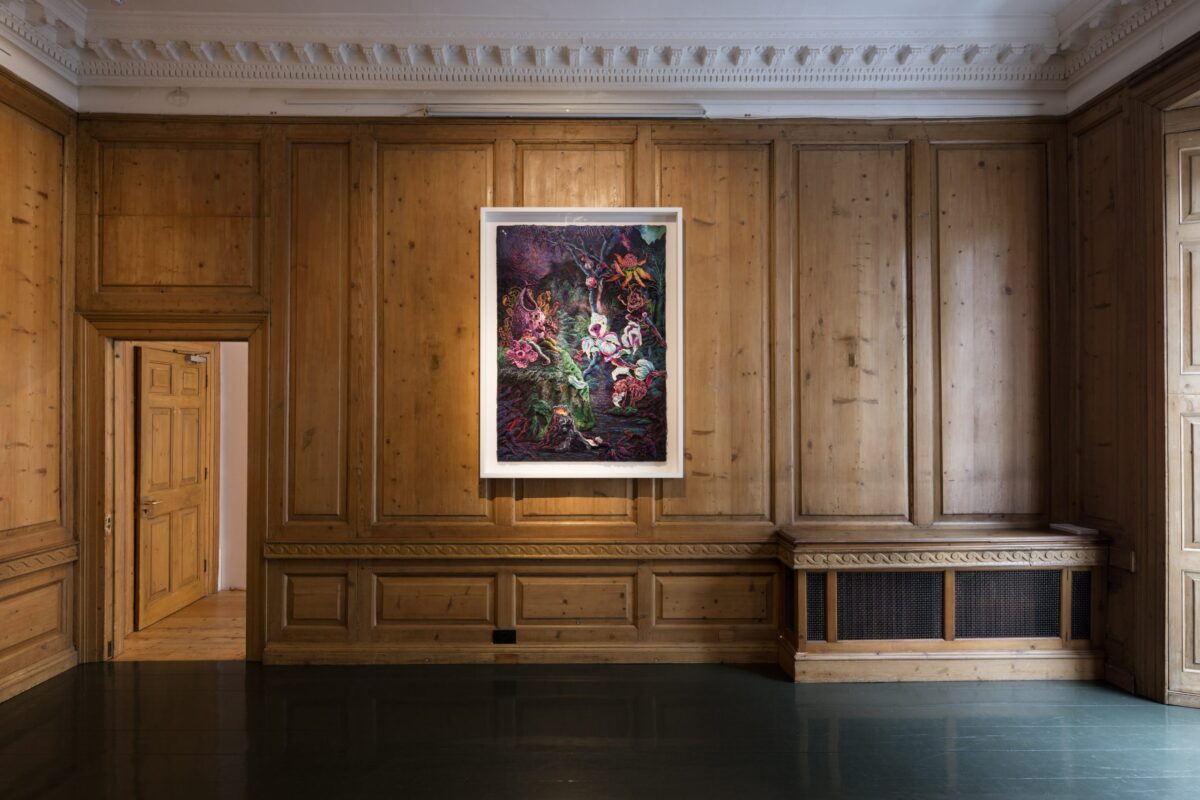 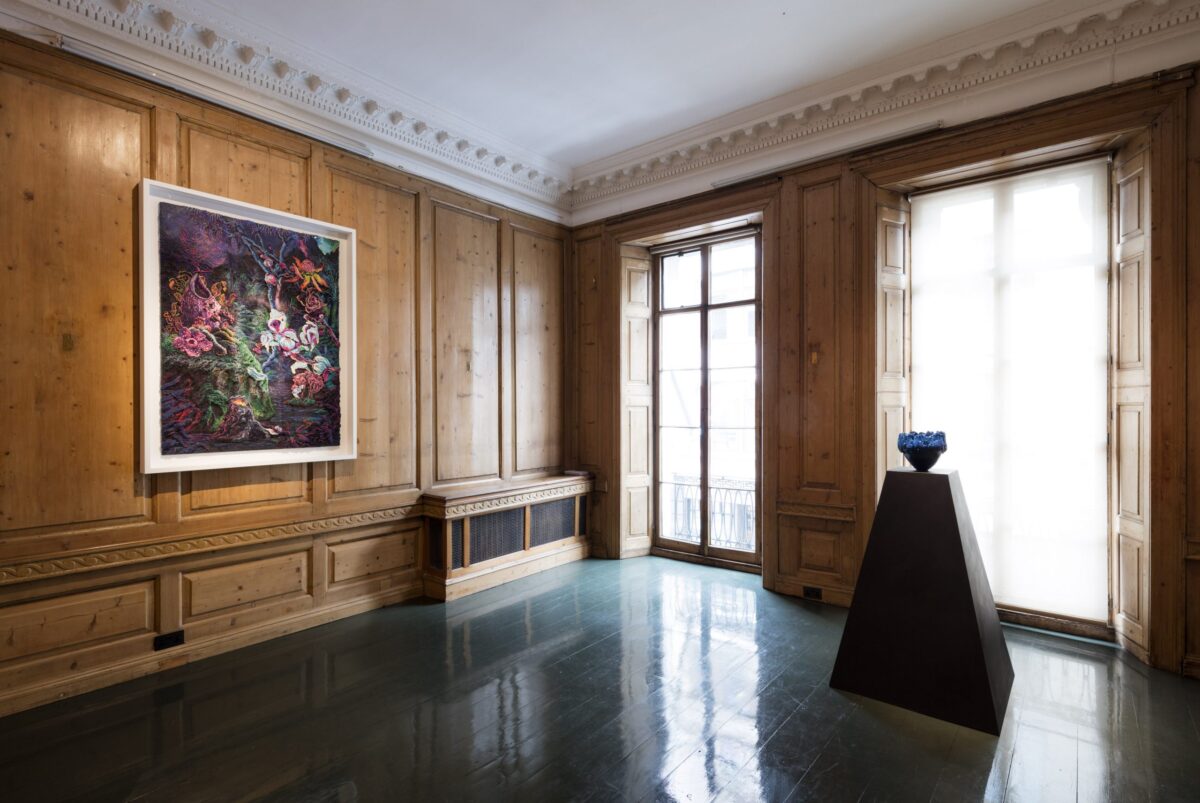 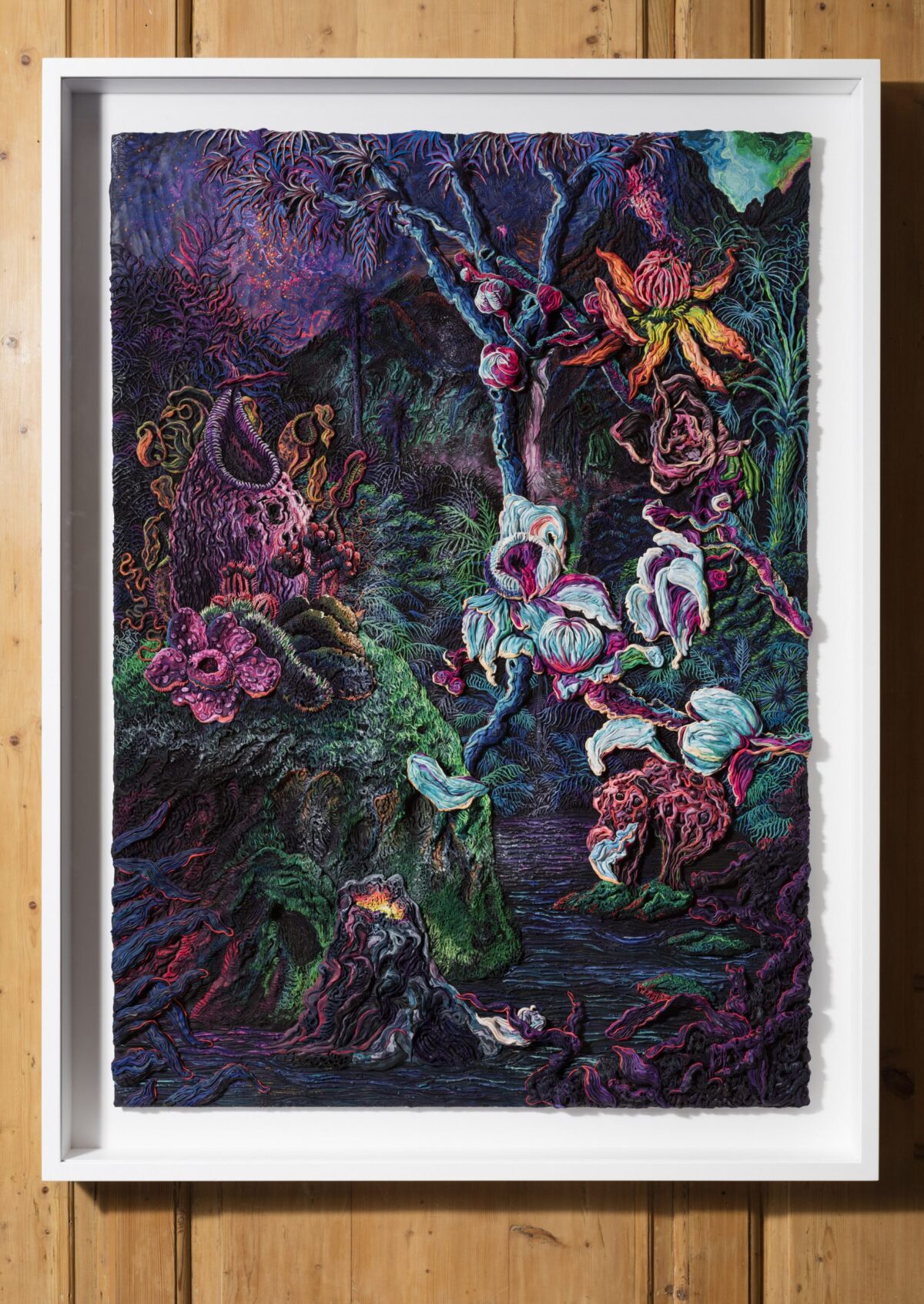 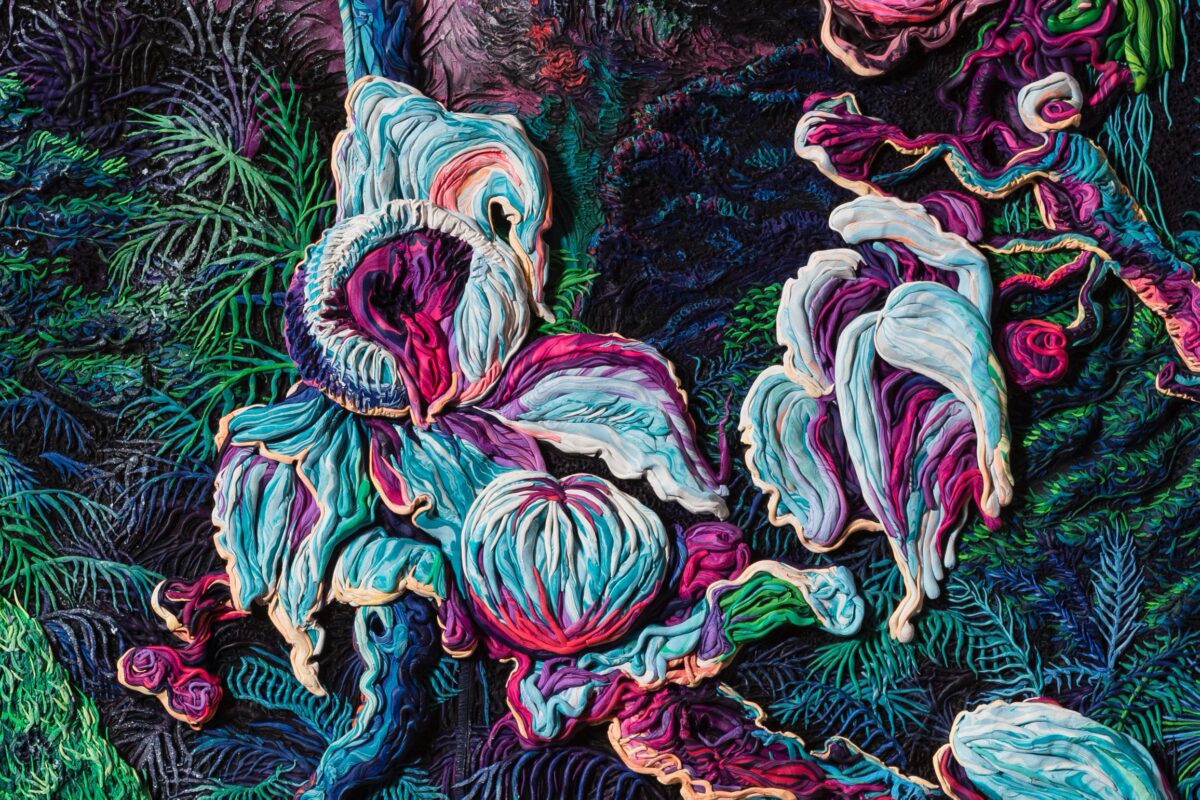 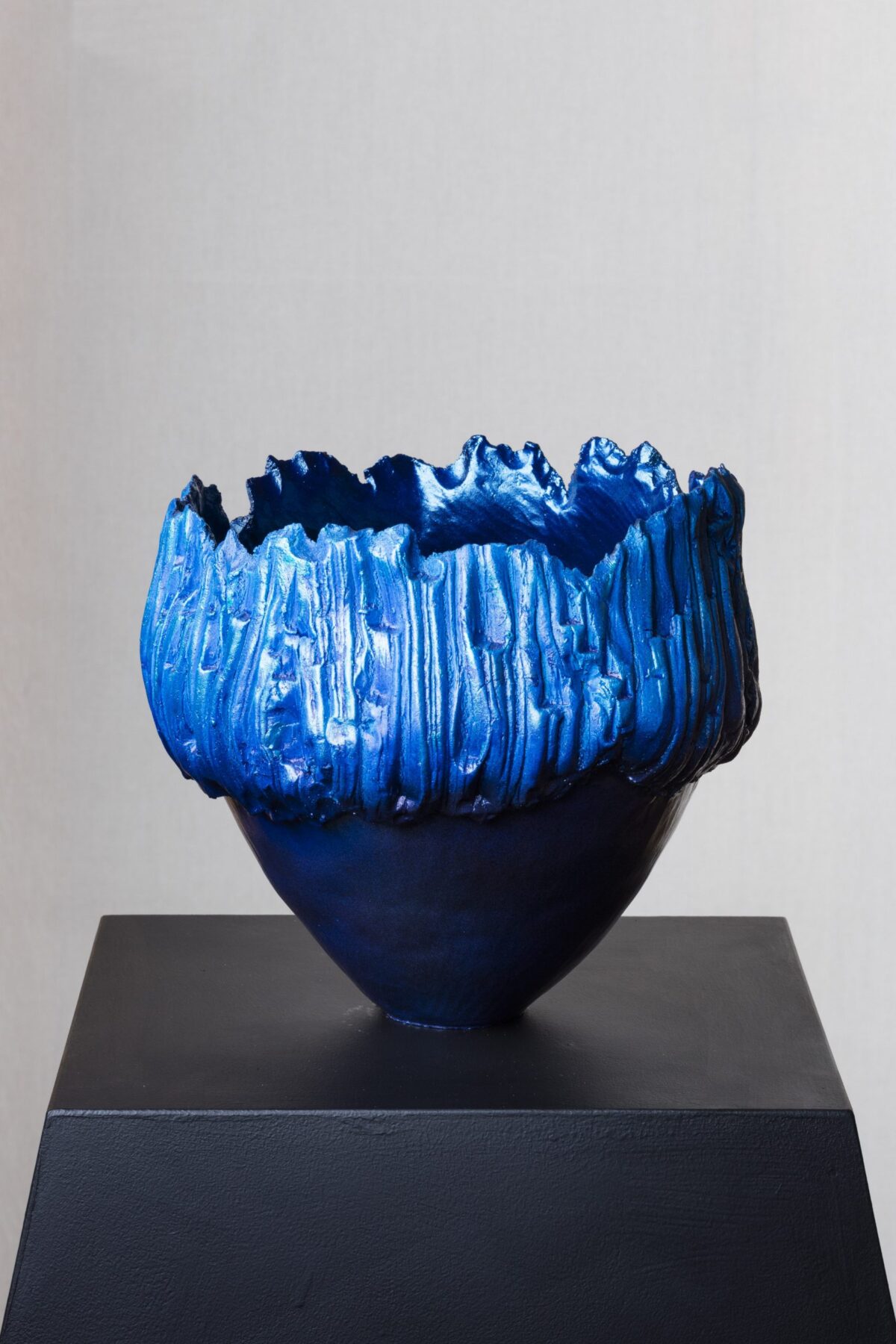 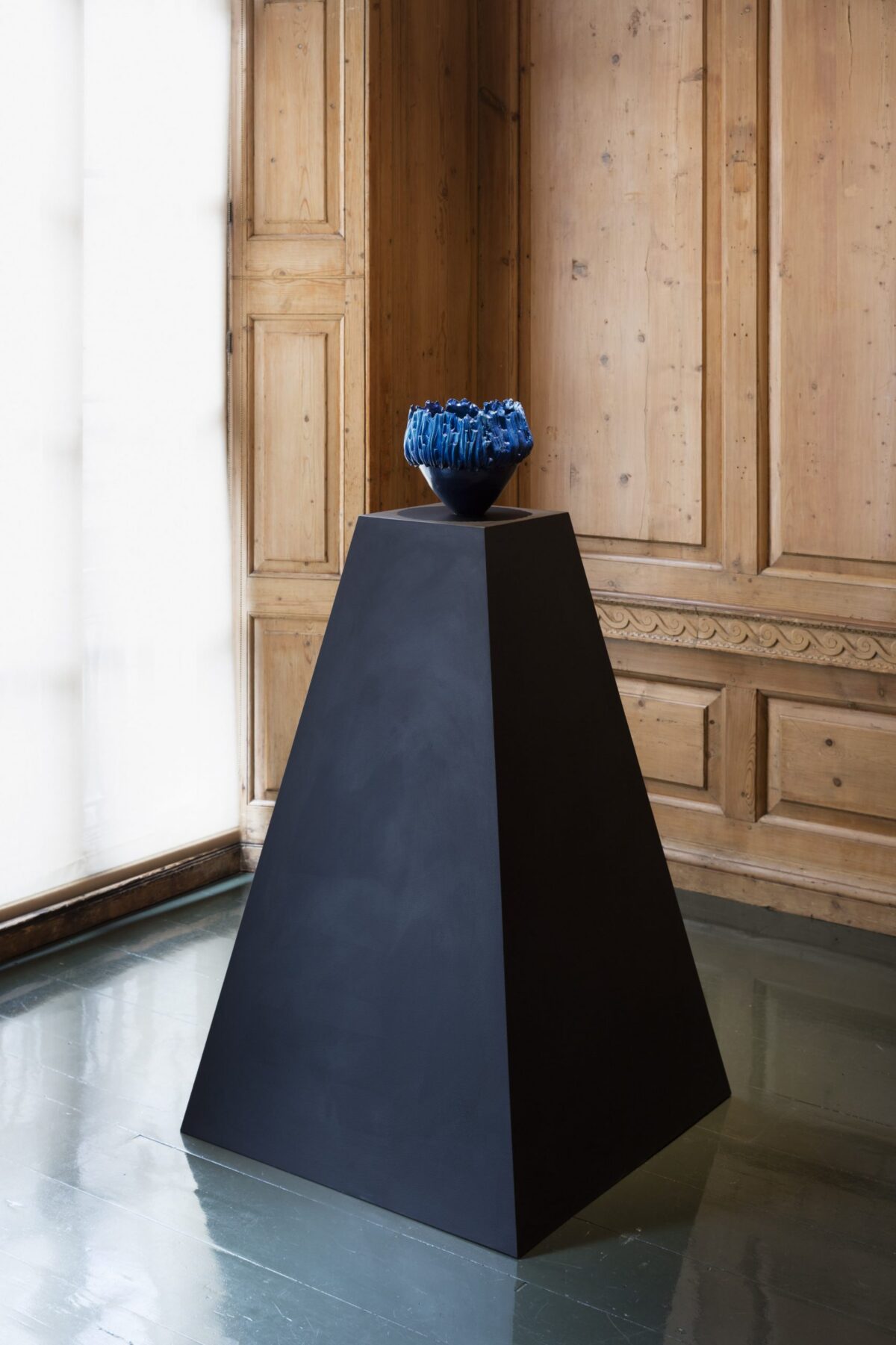 Henry Hudson’s new body of work Sun City Tanning is set in what looks initially like a tropical paradise featuring plants of vivid colours overlaying each other. On closer inspection, however, these are landscapes of almost suffocating density. They are scenes of over-abundance, where the hallucinogenic qualities of many of plants depicted seem to have been already imbibed by the viewer. Paradise, it seems, is not quite all that it might appear at first sight. Here, Hudson takes on the awe-inspiring subject of botany, observing the constant struggle for survival in the life of plants as well as hinting at shamanic rituals of spiritual healing. These nature paintings, while figurative, offer an abstract investigation into the artist’s philosophy of transgression and transcendence.

From his studio in East London, Hudson assembled large imagined tropical environments drawn from a wide range of sources, including photographs taken during visits to Kew Gardens, internet images and historical books of botanical illustration. By having never set foot in the jungle, Hudson draws similarities to the practice of French Post-Impressionist Henri Rousseau. The heaviness of the imagery is underscored by a different, physical heaviness. Hudson has become known for his use of the children’s play material, plasticine, melting layers and placing them on top of each other to create works. He builds the layers of plasticine up to the point that the wall-based works hover somewhere between paintings and sculpture. These are works that insist on their object-hood. They have a distinct aroma that signals that they are clearly not paintings in a conventional sense. Yet equally as with Hudson’s previous ‘paintings’ the layers of plasticine are constructed in a way to give the convincing appearance of the heavy impasto of expressionist painting. There is a tension here that relates to the founding myth of expressionism – that with free strokes of a brush, the artist could convey inner-truths. Hudson’s works gesture to that idealised freedom whilst being painstakingly constructed.

With this body of work, Hudson continues to make playful use of storytelling maintained within his practice, using the jungle as an allegory of the human condition. It is worth noting that Hudson’s method of making the works differs from what is stated on his own Wikipedia page. Willingly blurring the boundaries between reality and fiction, the artist negotiates topics of anxiety, trauma and repair by approaching them from the point of view of social scientist, exorcist and healer, inviting comparisons to Joseph Beuys who, likewise, turned injury into fable and used a variety of mediums to propose magical strategies of healing.

There is a positive, almost cheery engagement with the history of modern art that suggests Hudson wants to productively deal with the misrecognitions and self- fashioning that underpin that history but in a way that accepts assumptions and little deceptions. Hudson’s work demonstrates that in the end, the legacy of modernism will take the most unexpected and unusual forms.

Shown alongside the paintings will be a collection of hand coiled ceramic pots, made in collaboration with the artist’s brother Richard WM Hudson. These tricolour, painted vessels, organ-like in appearance, will be comparable to carnivorous plants. The vessels also refer to sacred cups employed in shamanism, ayahuasca ritual and ceremony.

Henry Hudson’s playful narratives, imagined or otherwise, will reveal a true exploration into the artist’s medium and his craft. For the first time Hudson will experiment with mixing his own colour pigments. With nature as his subject, he will traverse techniques hitherto unexplored in his practice.

This series acts to transport the viewer into other realms. While offering a humorous metaphysical enquiry into human behaviour and endeavour, expanding upon themes of human enquiry and transgression, the common thread running through the oeuvre of this exciting artist.

Richard WM Hudson (b.1980, UK) lives and works between London and The Yorkshire Dales National Park. Hudson’s contemporary ceramics are included in the permanent collection of the Victoria and Albert Museum, London. His work has been exhibited throughout Europe, most recently in a solo exhibition at The Hartnoll and Daughter Gallery in Mayfair, London. His work has been reviewed by art world figures including Greville Worthington and Patrick Dingwall.

A catalogue published by Kaleidoscope will accompany the exhibition, containing essays by Niru Ratnam, David Risley and Austin Lee.