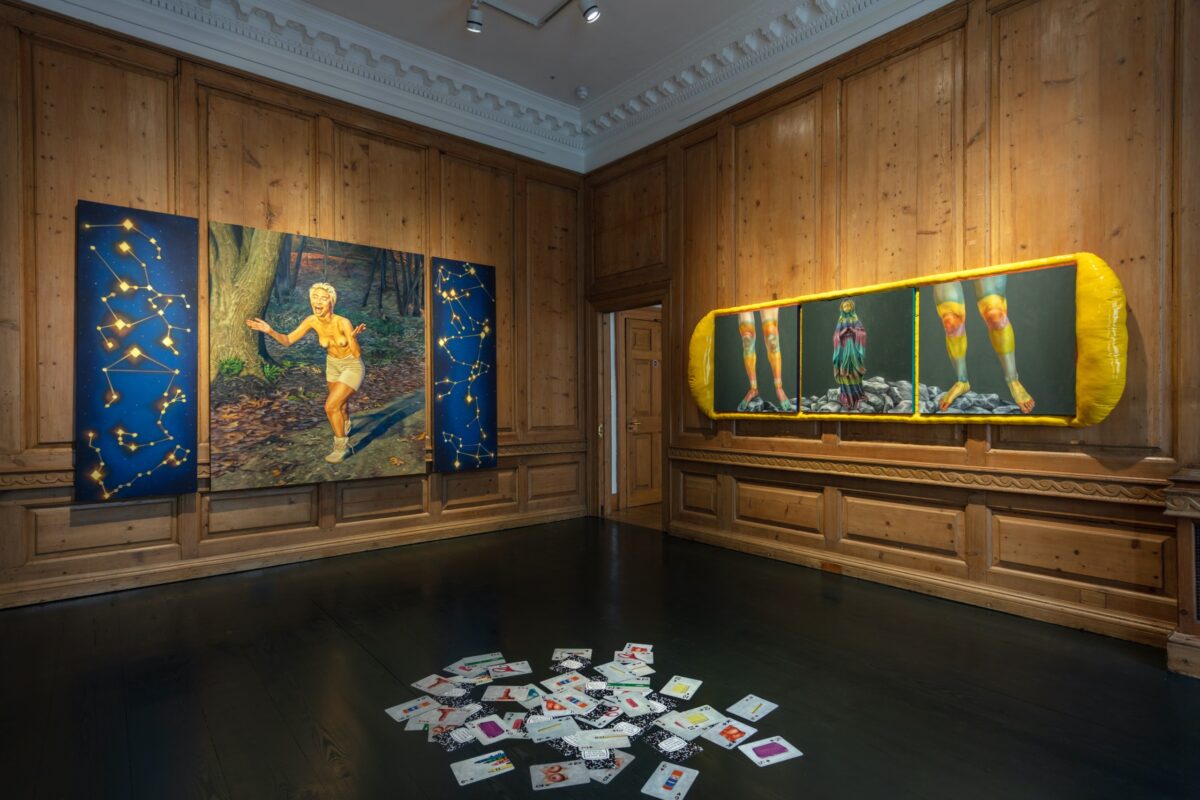 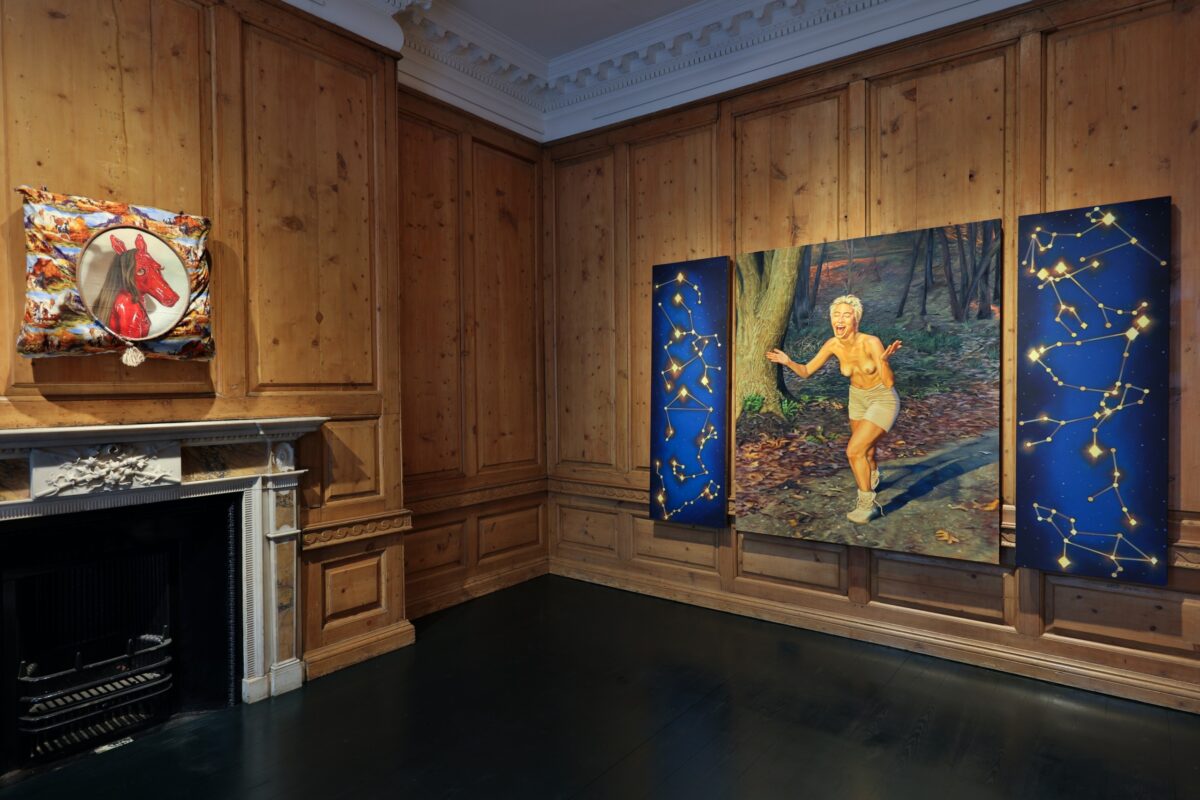 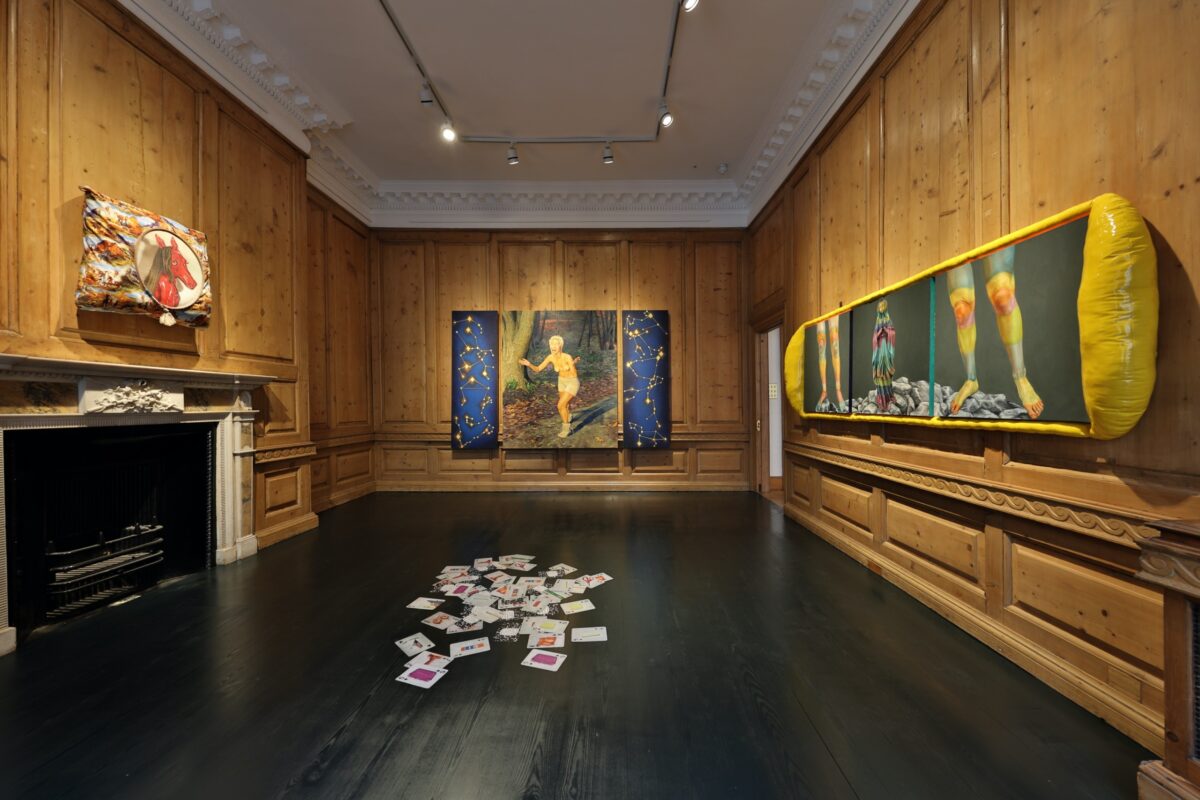 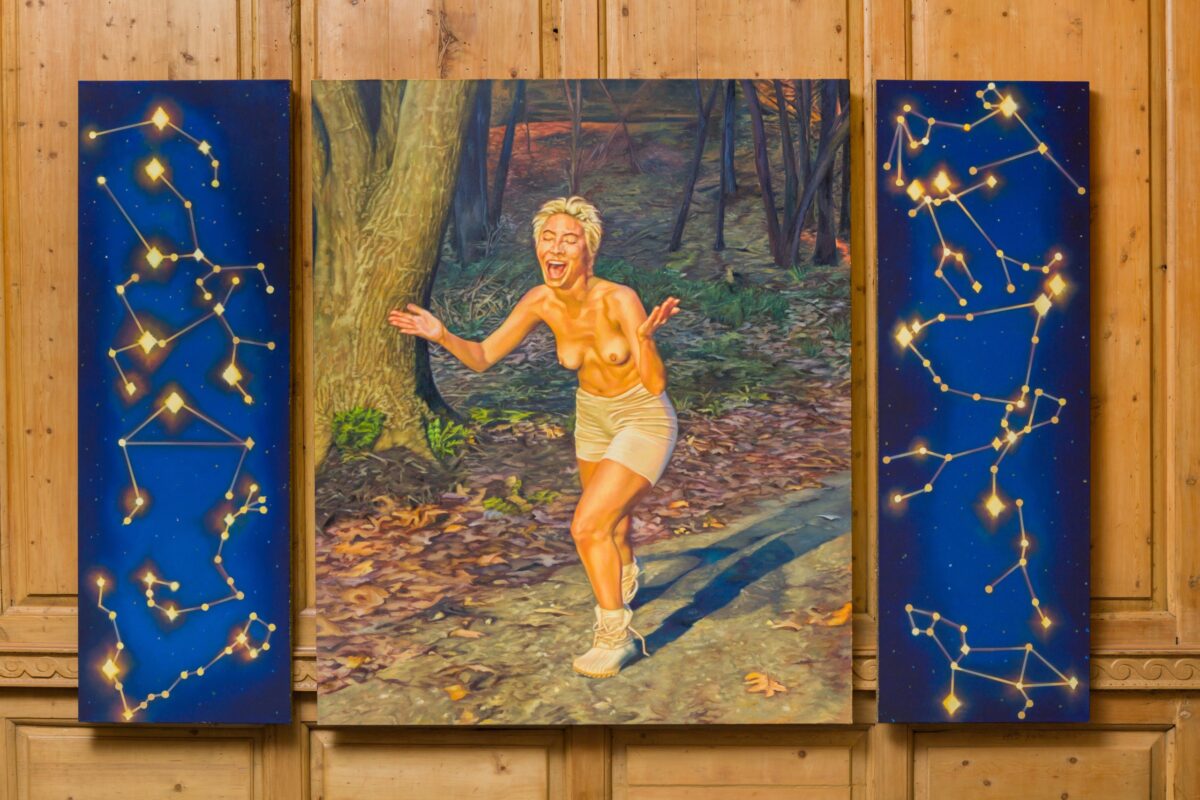 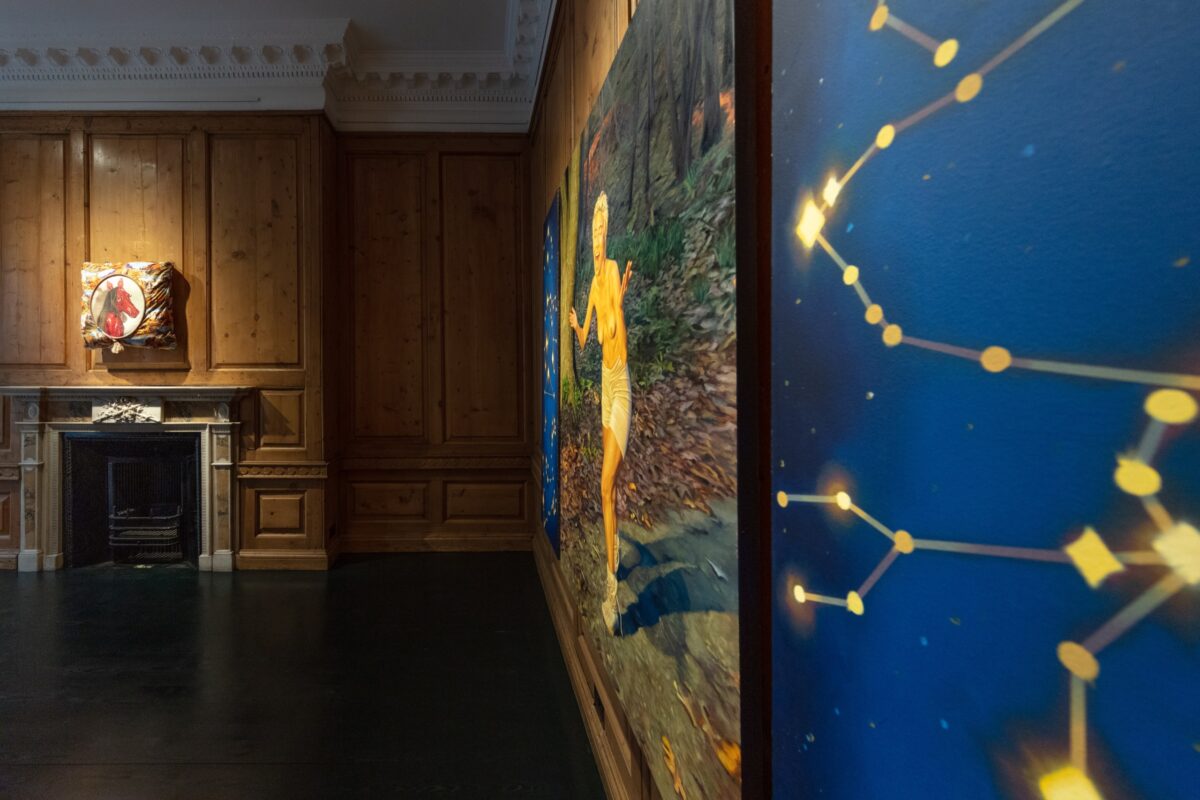 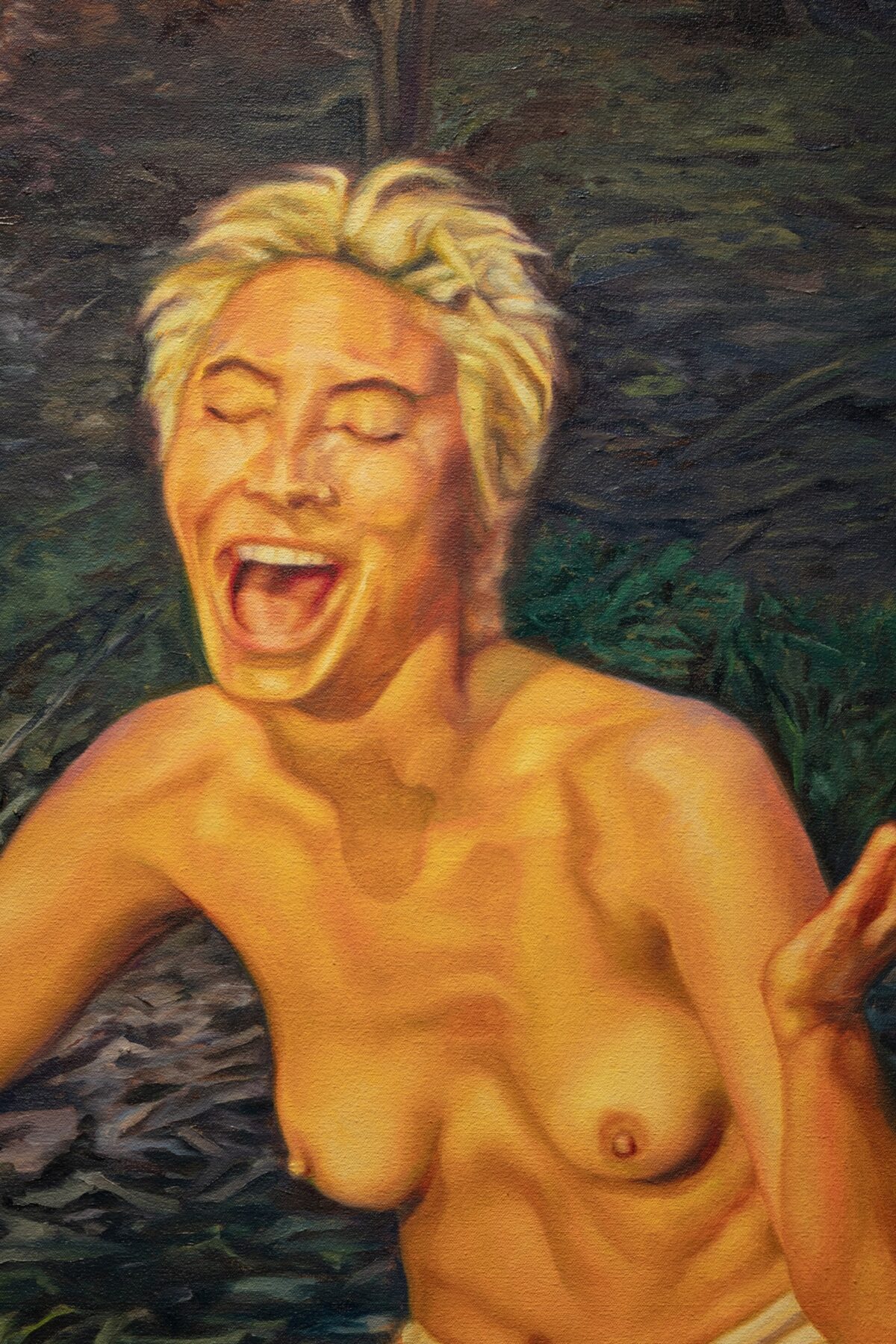 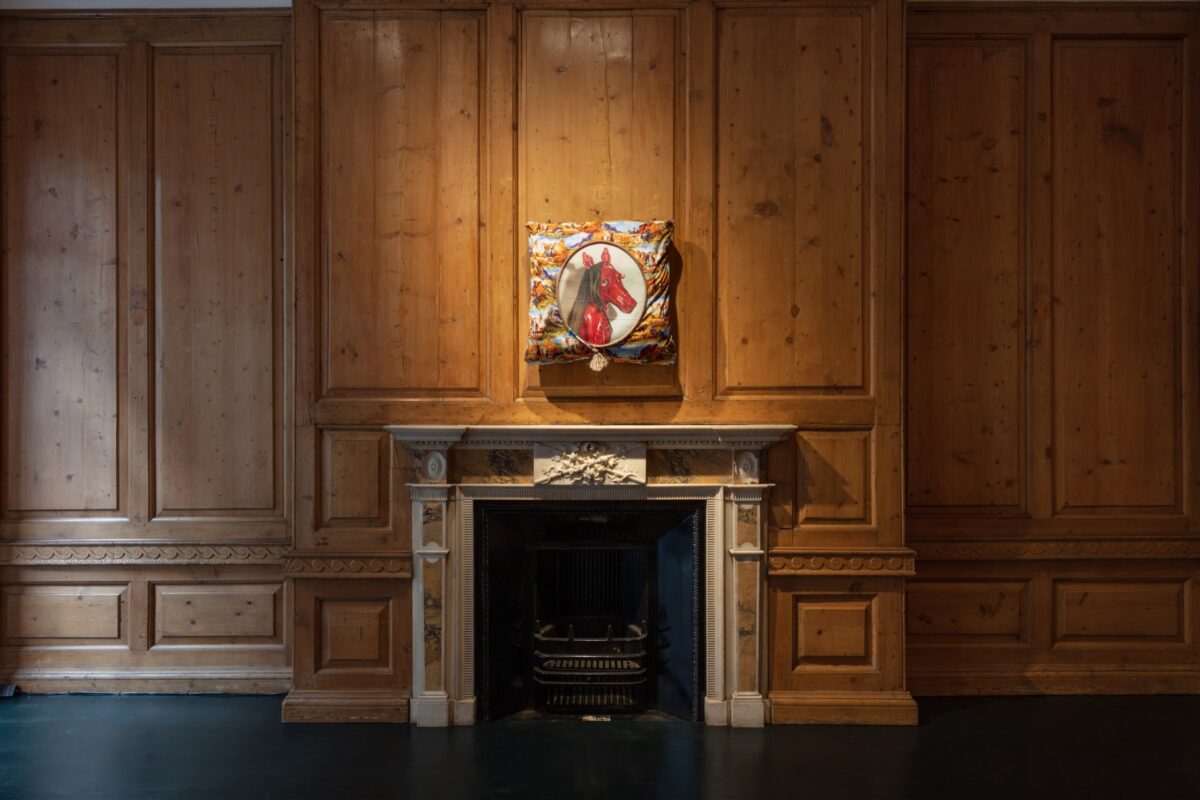 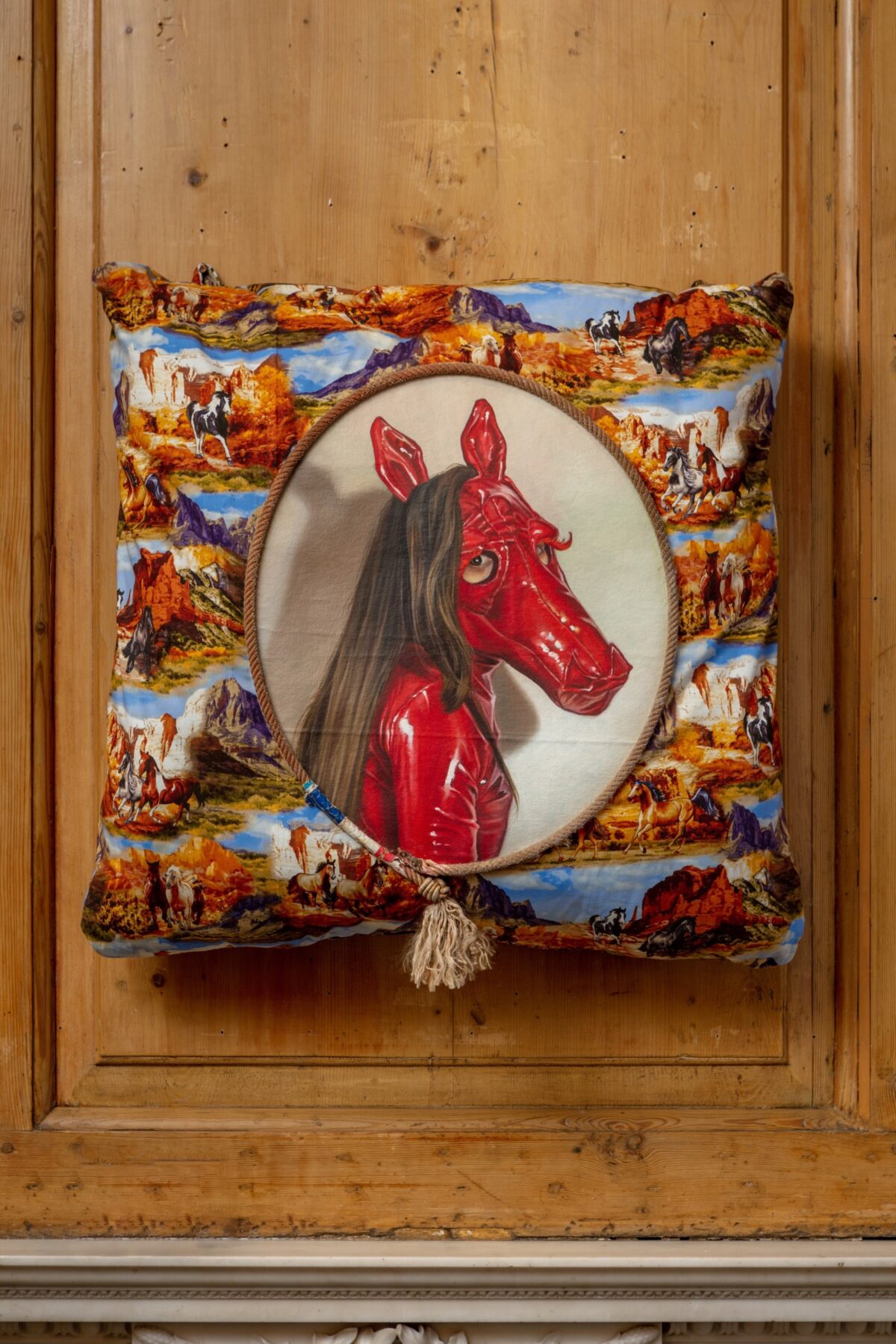 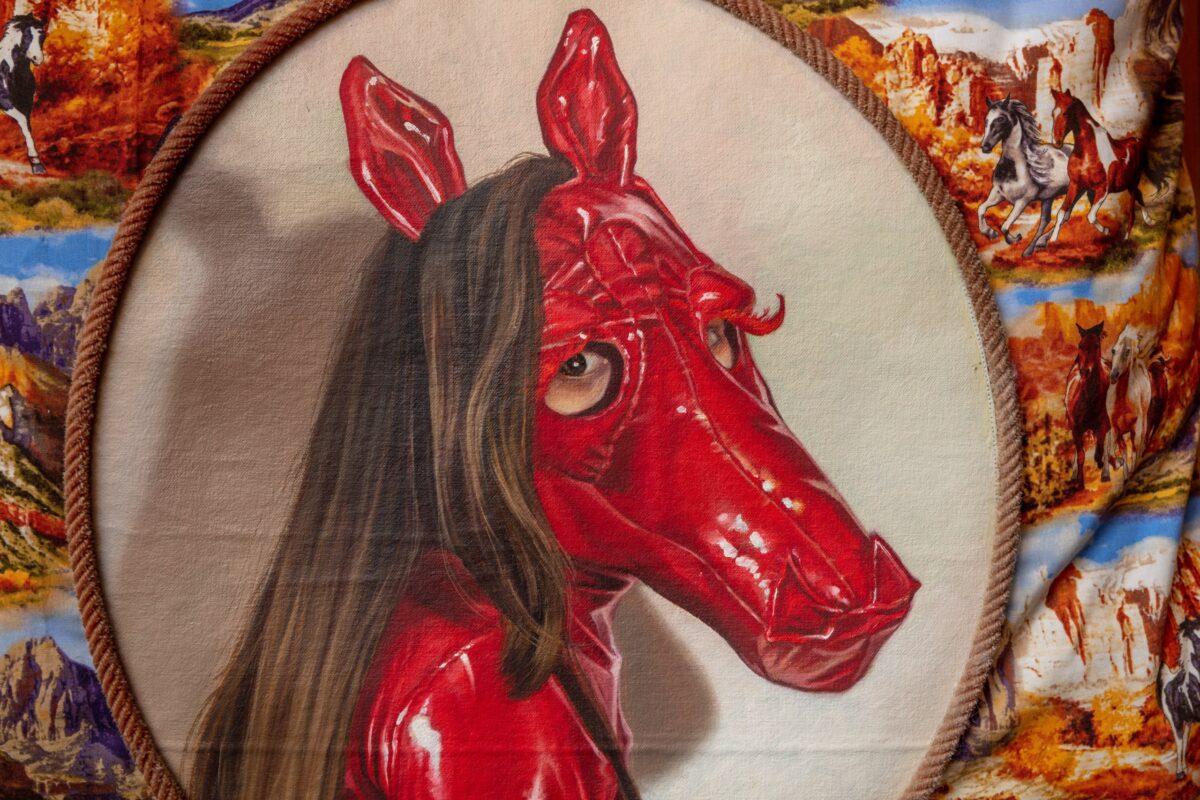 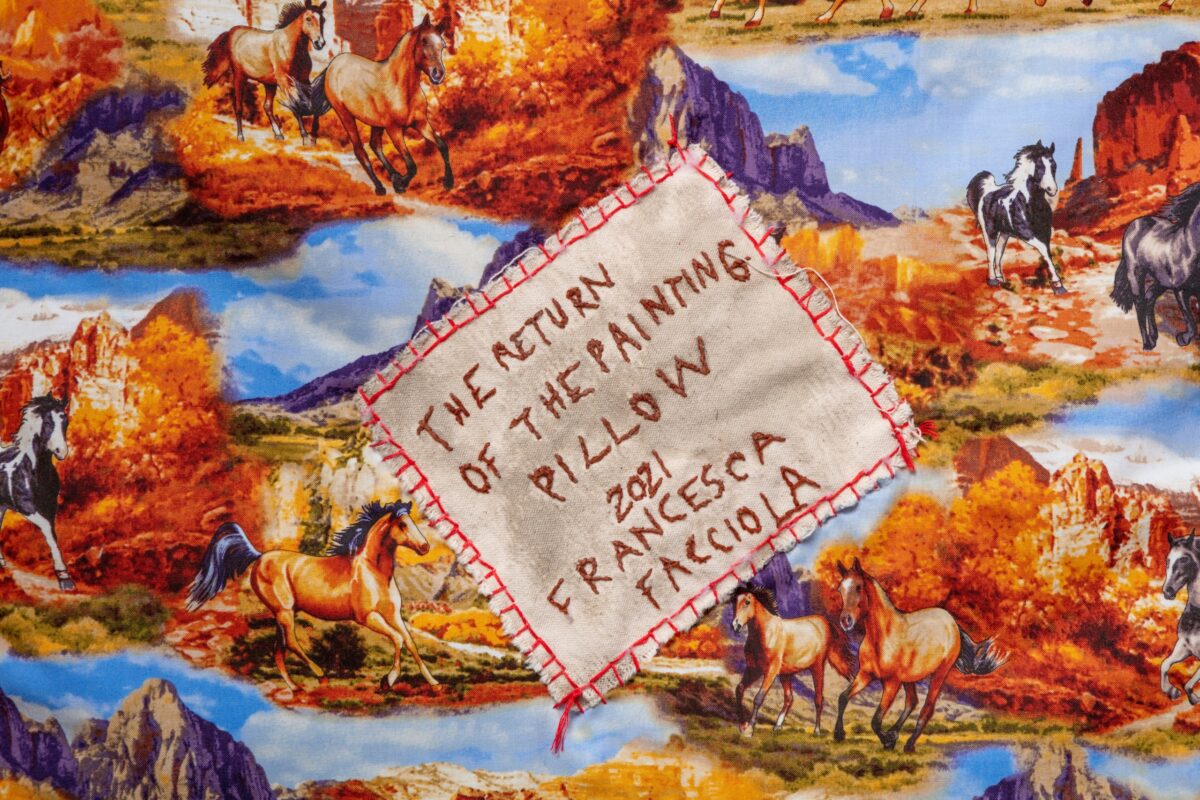 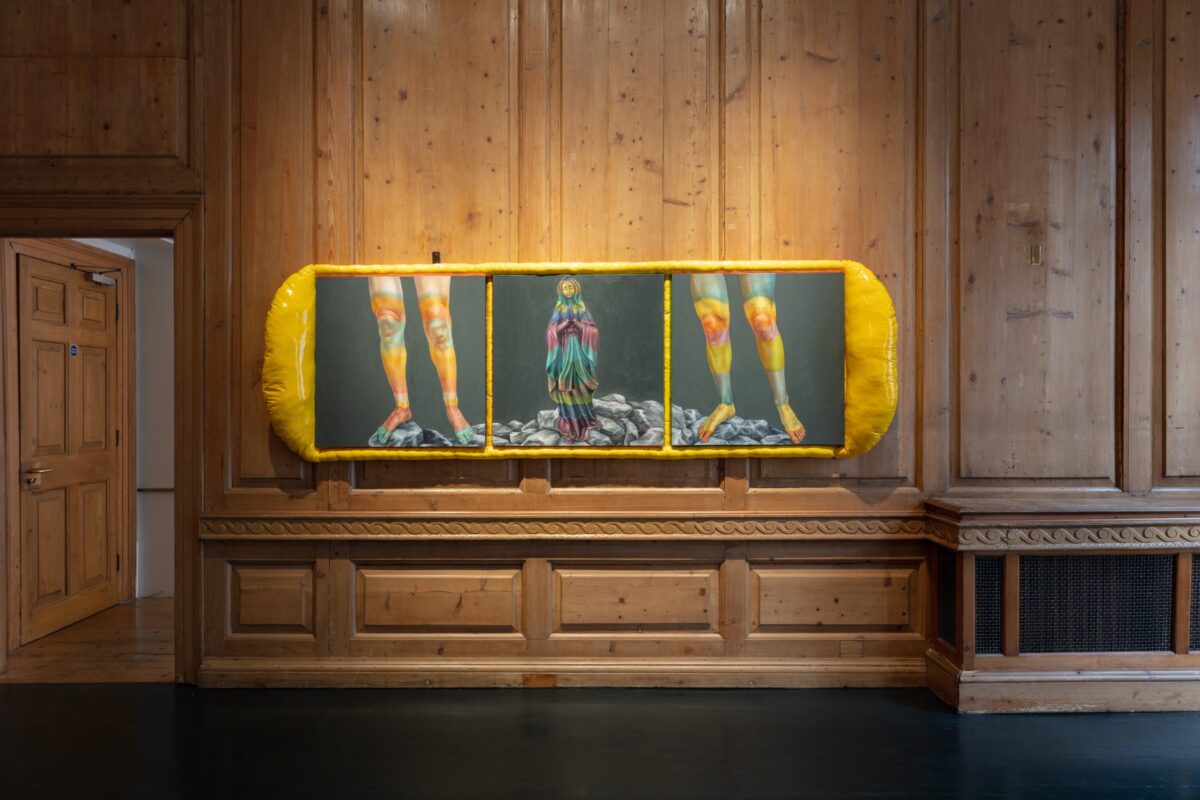 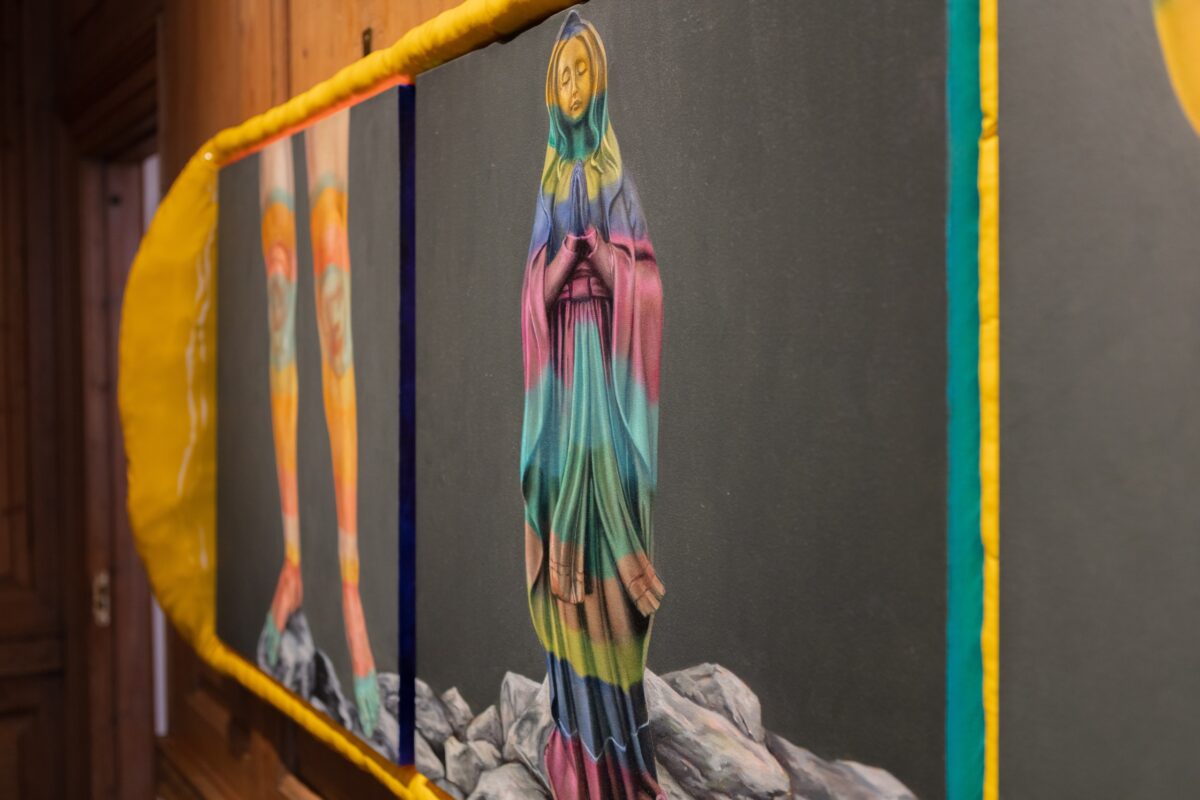 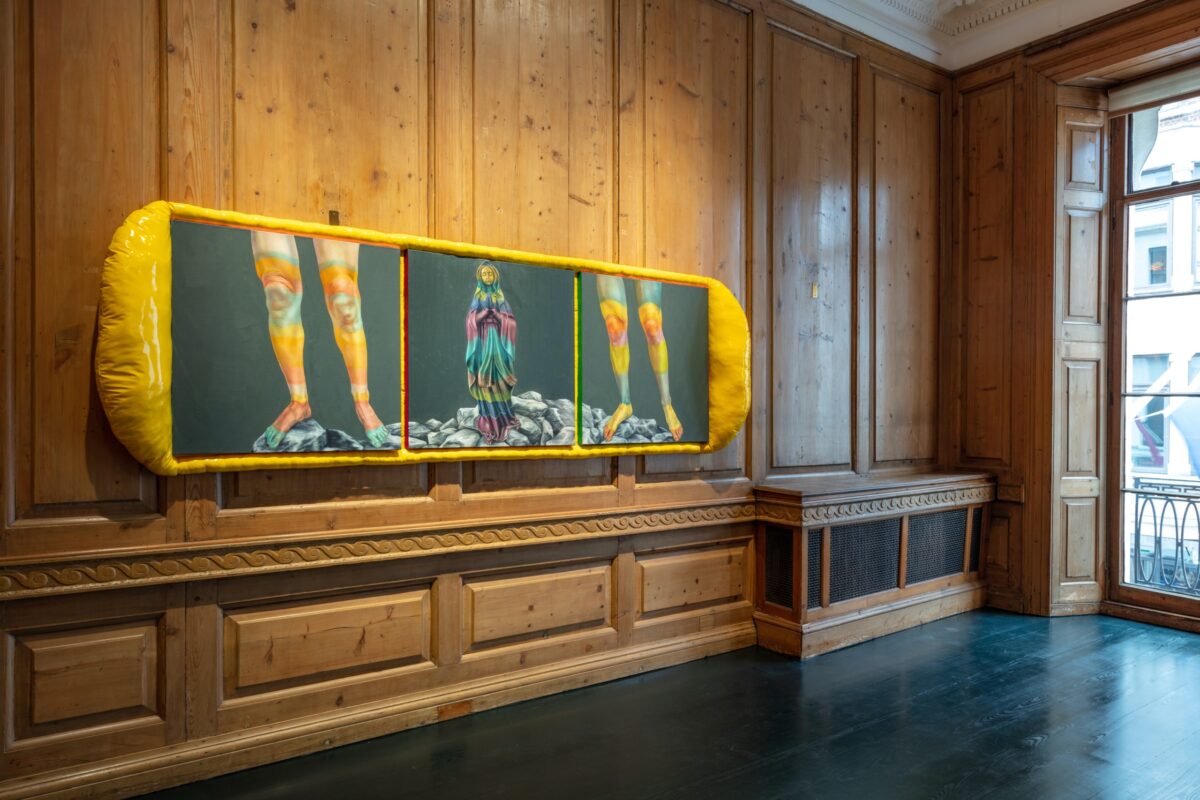 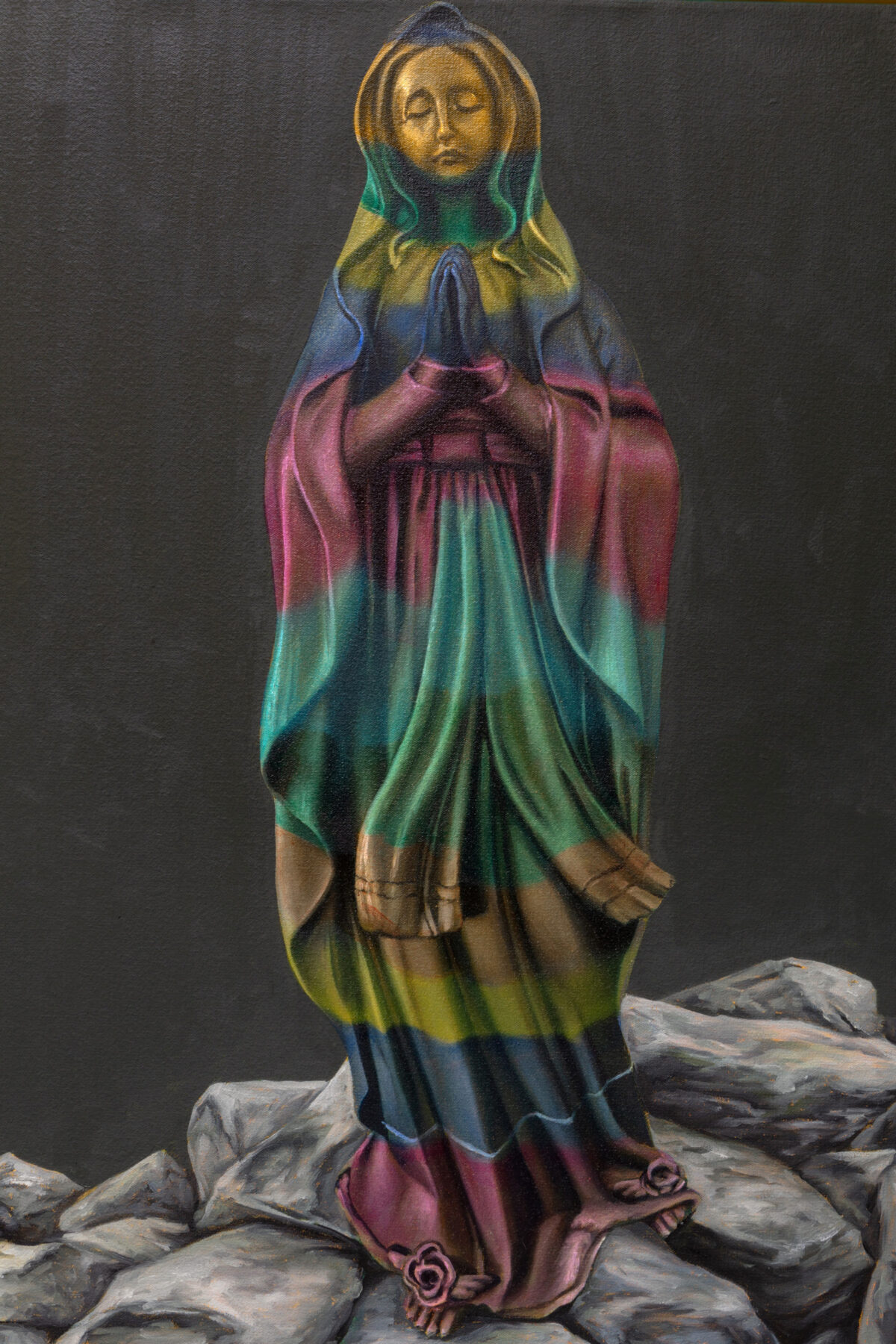 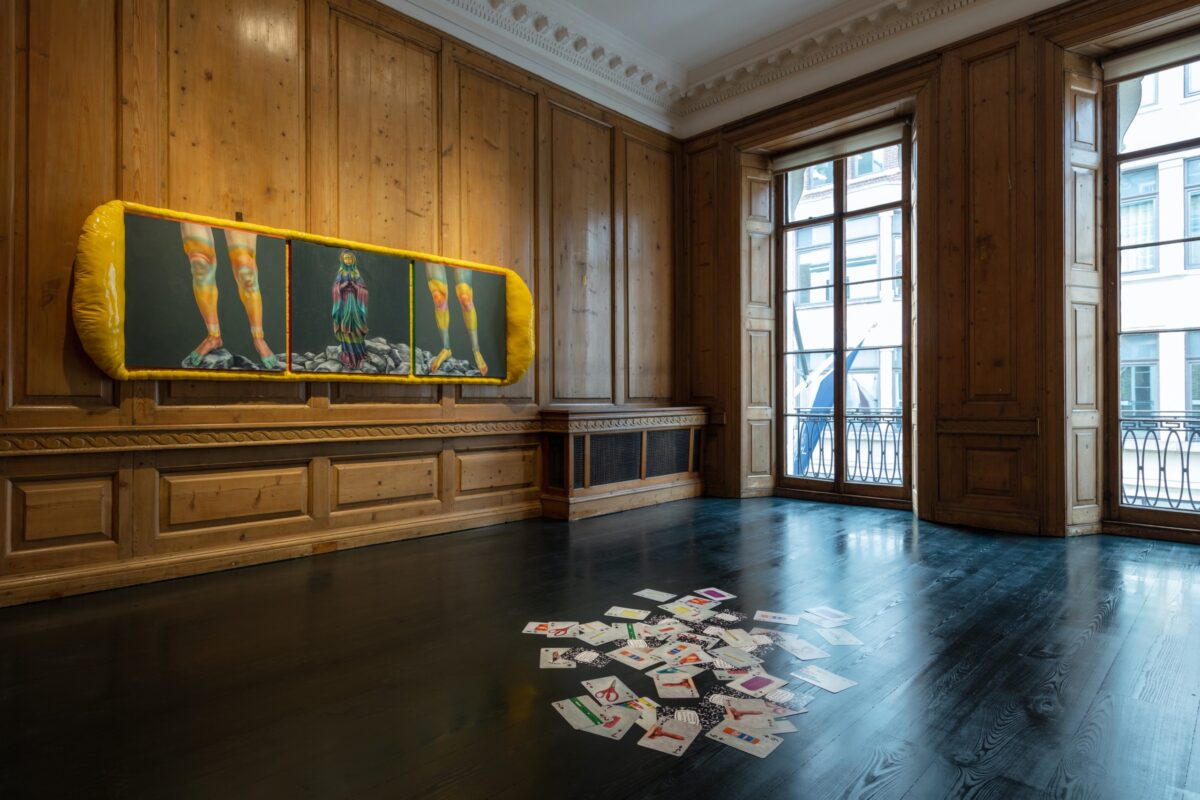 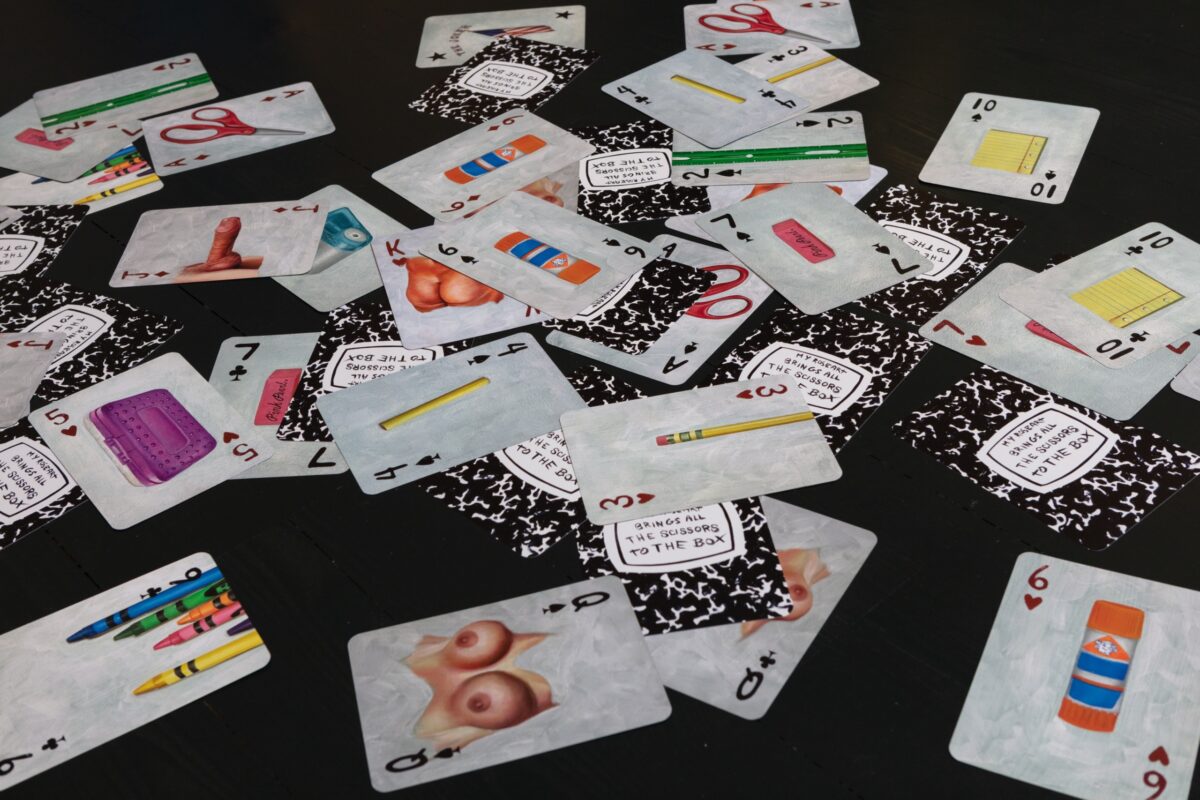 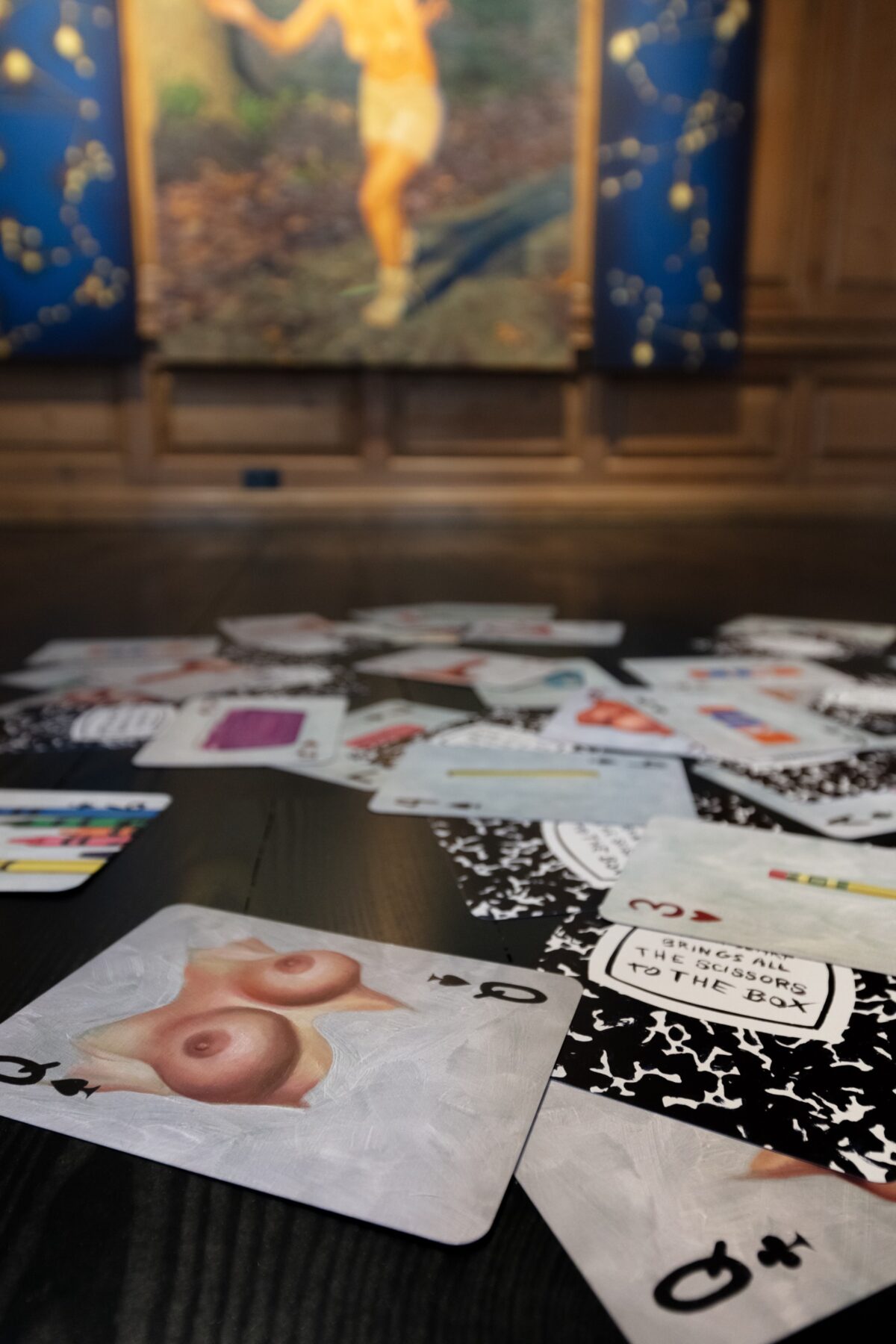 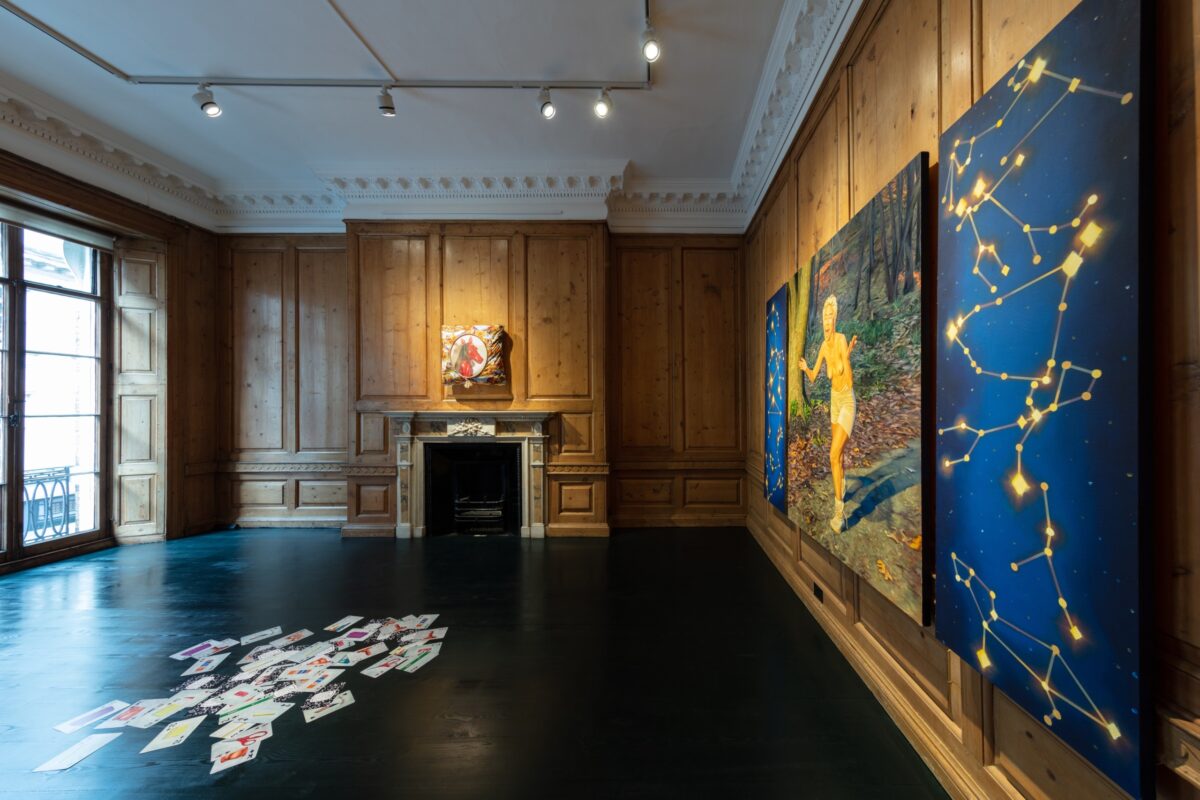 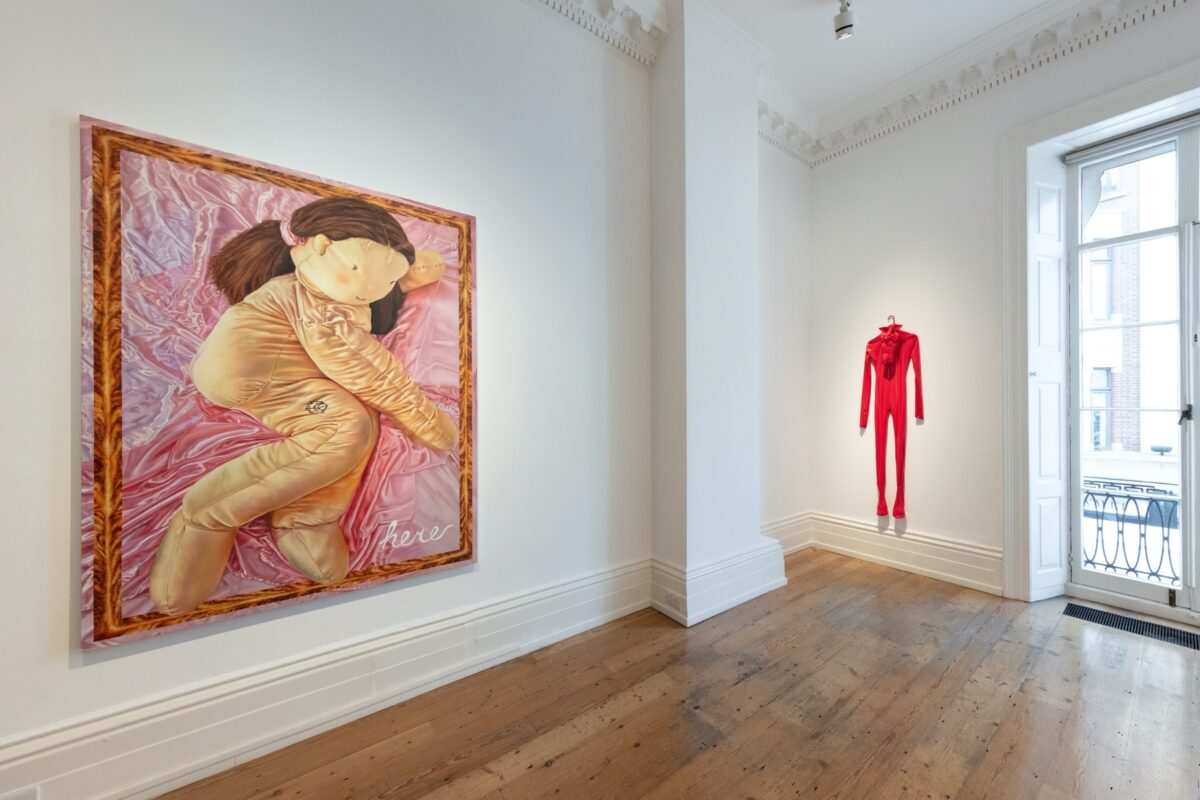 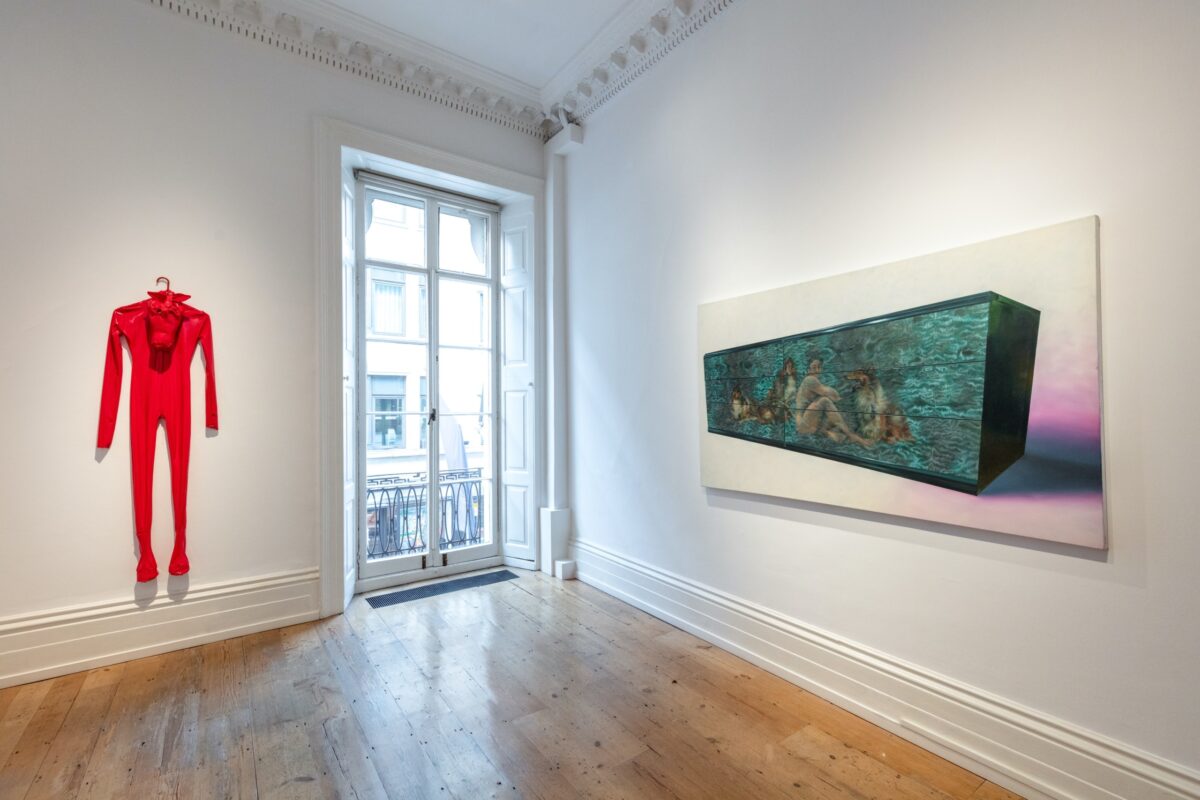 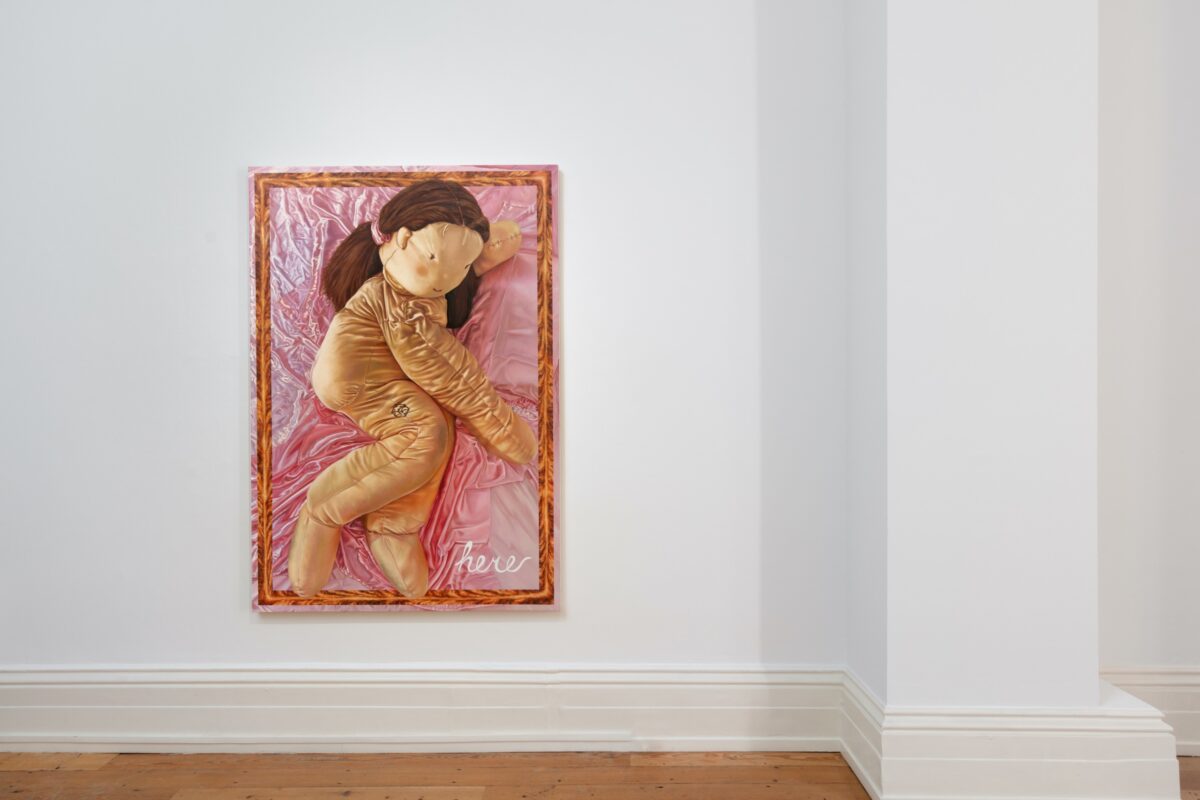 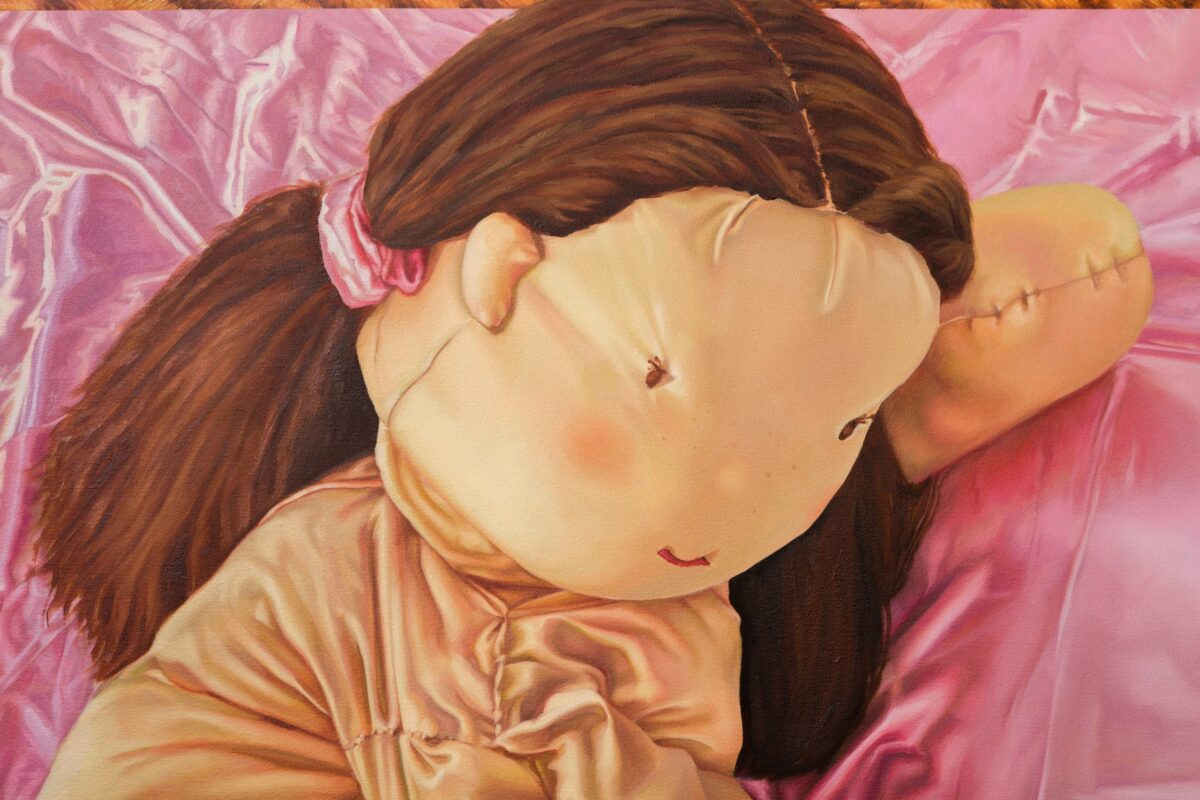 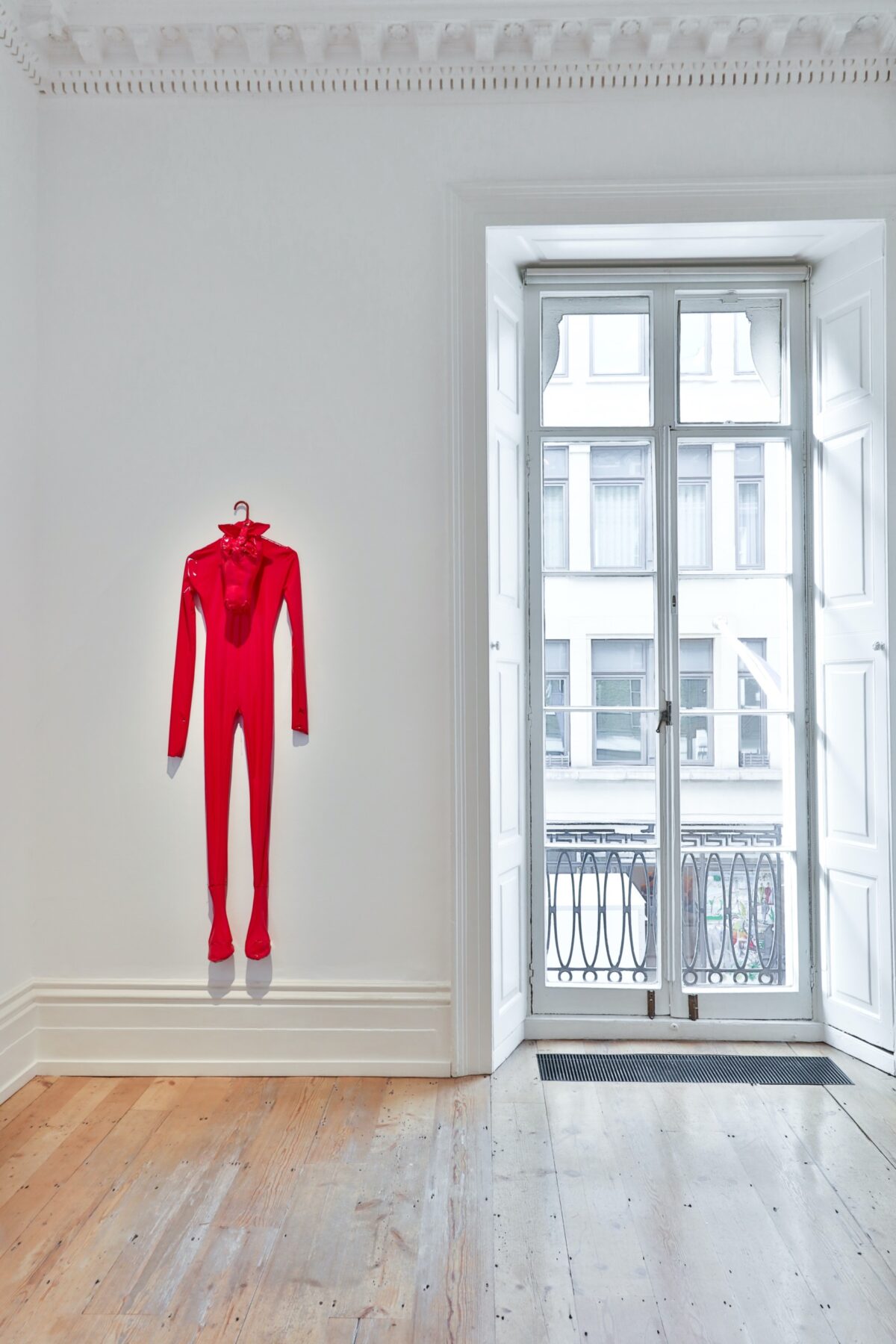 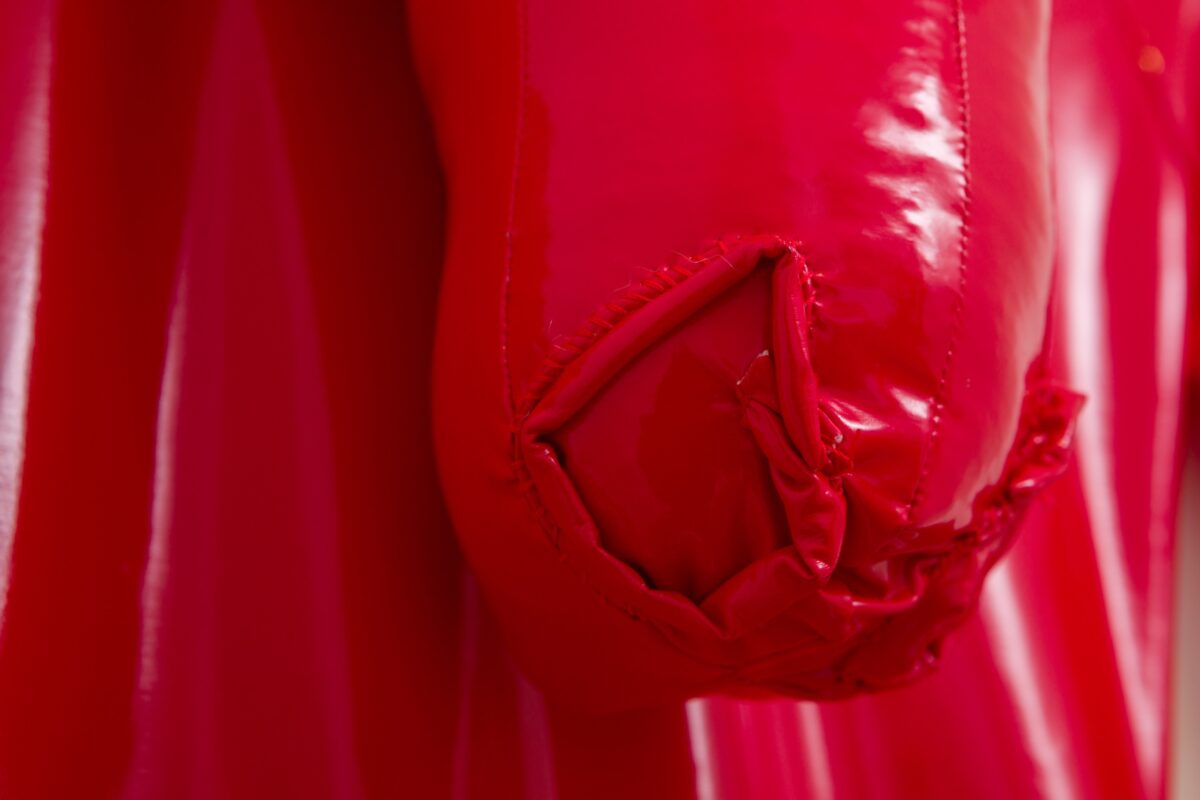 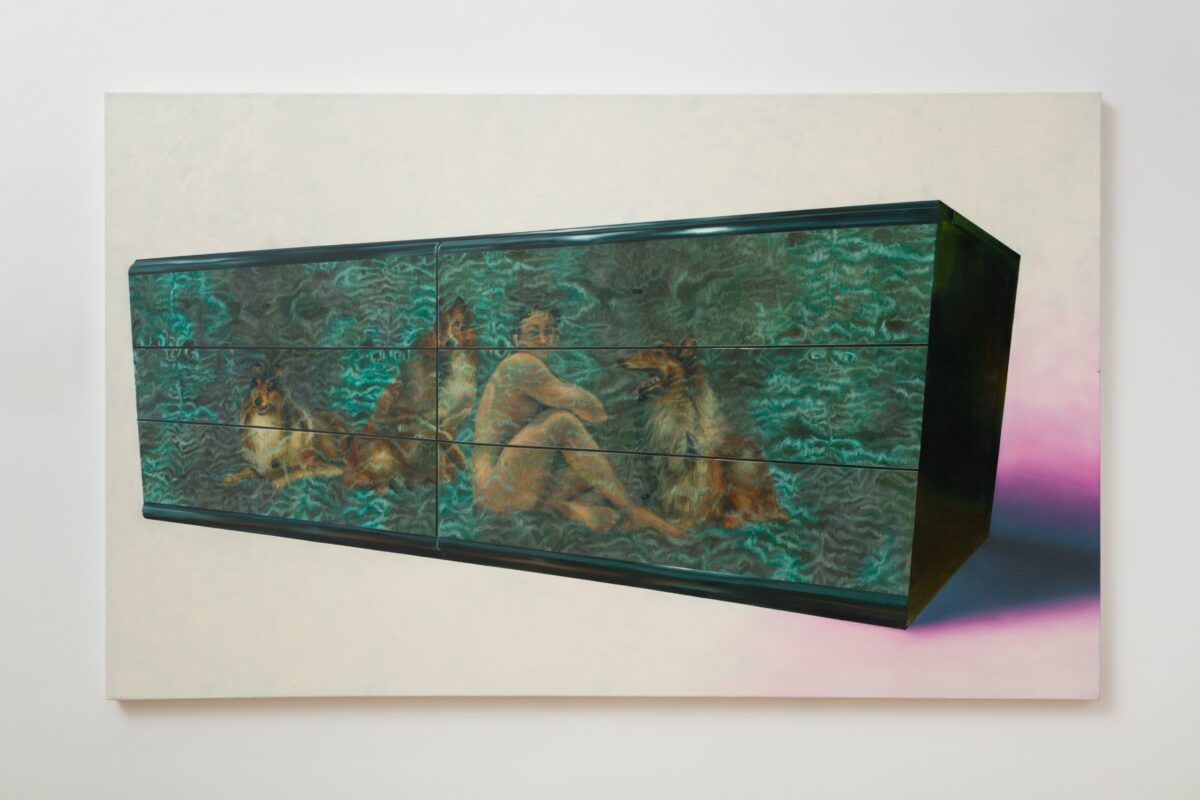 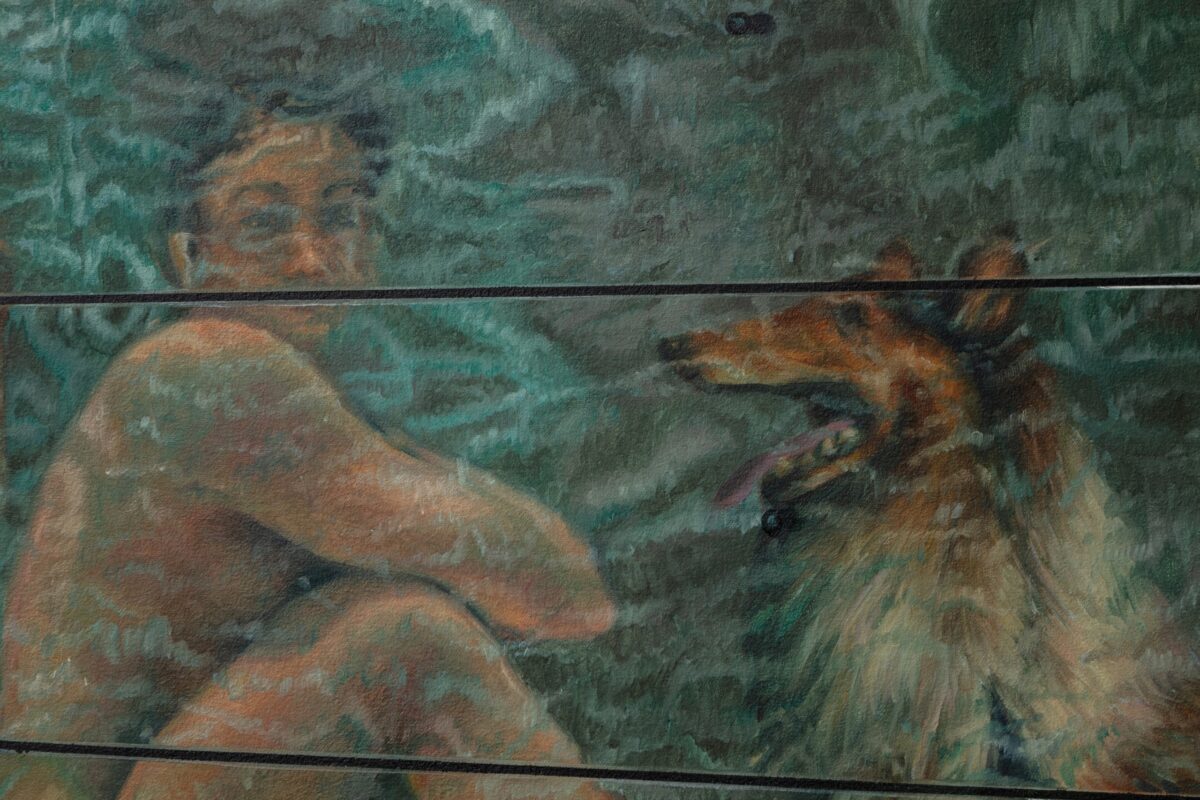 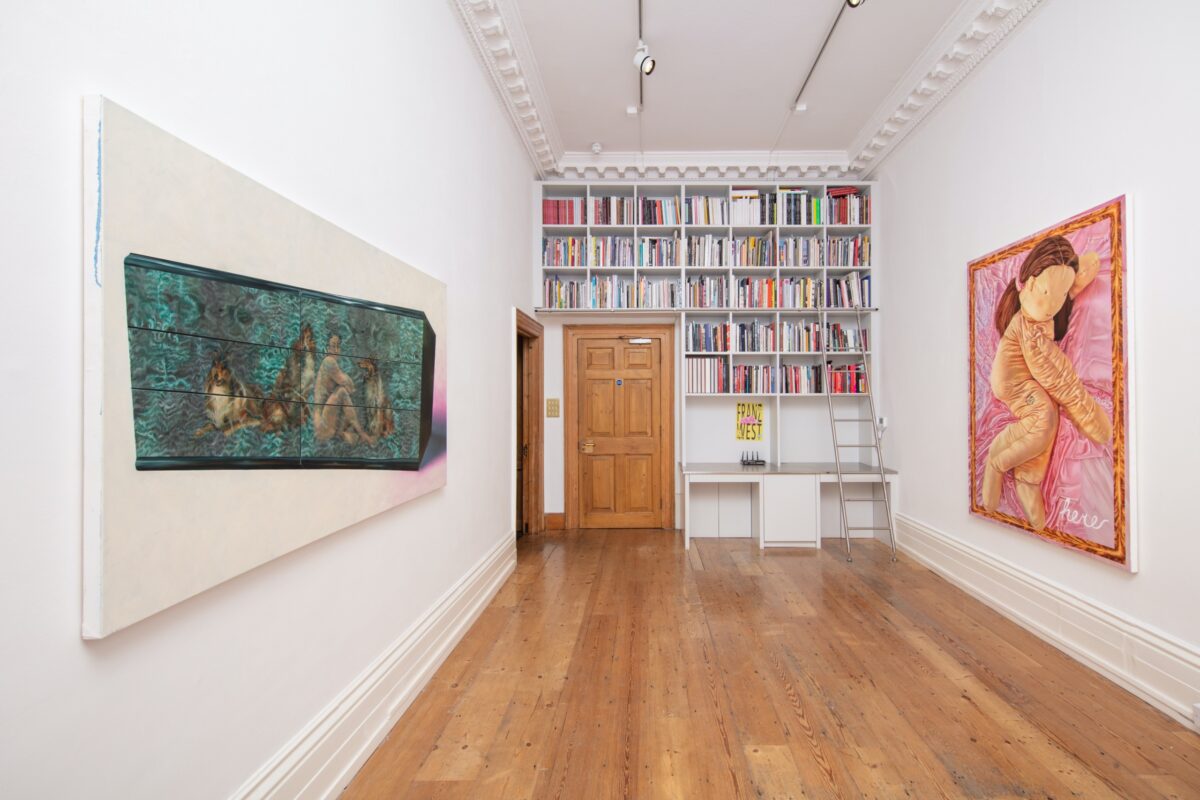 “If a little dreaming is dangerous, the cure for it is not to dream less but to dream more, to dream all the time.”

To walk into this exhibition is to enter the theatre of Facciola’s mind. These strange and wonderful paintings and objects have emerged from a year of intense work and thought, their content drawing on private ruminations, personal encounters, her dream life and the cacophony of images and ideas that assault one daily, flitting across one’s screen, causing one thought to randomly and unconsciously triumph over the other.

In ‘The Lamb Lies Down on Broadway’ a miniature Madonna stands a-top a pile of rocks, flanked by pairs of classically sturdy sculptural legs that dwarf the Virgin. All are encased in rainbow stripes and this improbable trio mounted on an inflatable life raft, puncturing any possibility of salvation. In ‘We Can Jump Into the Fire’, a laughing topless hiker/festival-goer holds out her hands, eyes closed as if mid-anecdote, or giving thanks, in a theatrically-lit romantic forest backdrop. In the simply-named ‘Luncheon’, Hokusai-esque waves adorn an elegant black credenza floating eerily in the midst of the picture plane, an homage to the shadowy female nude figure of Manet’s Le Dejeuner sur l’herbe floating suspended in the water, two rough collie Lassie-lookalikes to keep her company. A deck of racy painted playing cards, ‘My Dirty Deck of Cards,’ completes the stage set.

Like props for her dream show, she designed and made the latex pony costume and the Bellmer-esque doll outfit that feature in ‘Painting Pillow’ and ‘See Me Feel Me Touch Me Heal Me’, inhabiting both to be photographed respectively as pony and doll, her eyes watchful and seductive, peering out at the viewer from the results. The empty shell of the red pony costume, complete with hooves, hangs limply on the wall in the exhibition, the disturbing metaphysical comedy complete.

With controlled abandon, Facciola dives unafraid into tropes of all kinds – painterly, philosophical, theatrical, performative – playing with her identity and the spectator in equal measure and transforming the sentiments with which she says each work began – confusion, insecurity, shame, curiosity, arrogance, fear – into a compelling whole that is hard to tear oneself away from.

Francesca Facciola (b. 1994) lives and works in New York. She holds a BFA from the School of Visual Arts, New York.