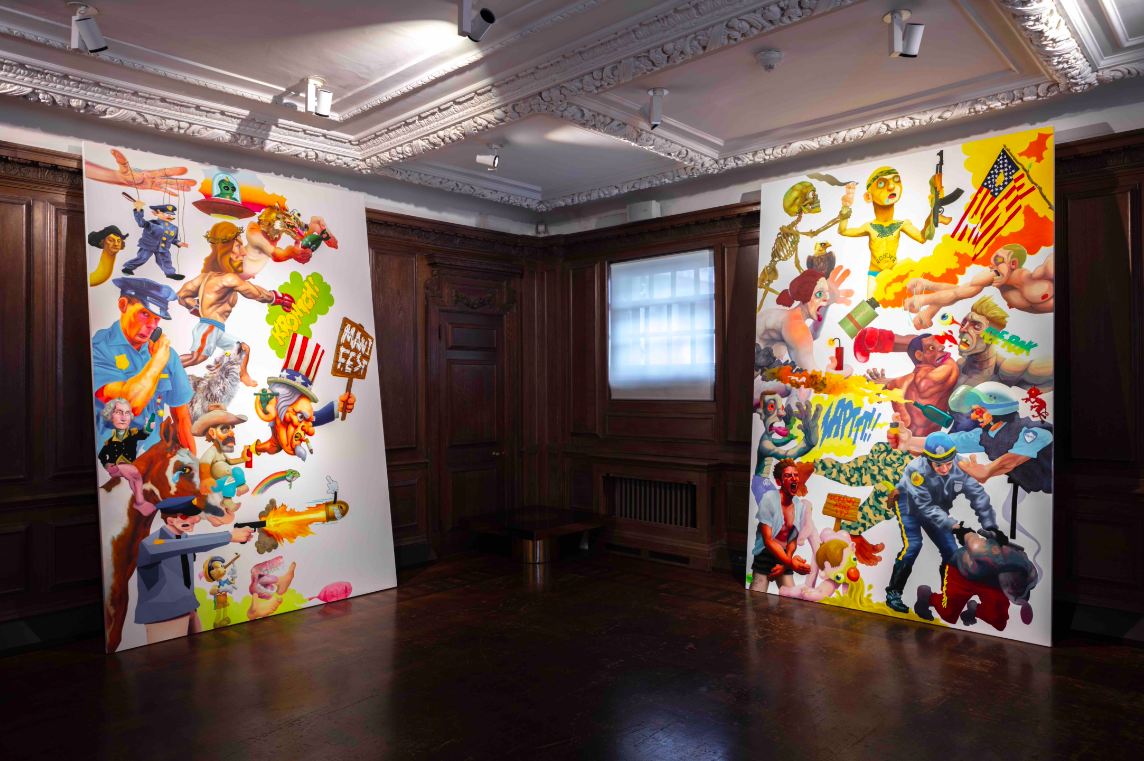 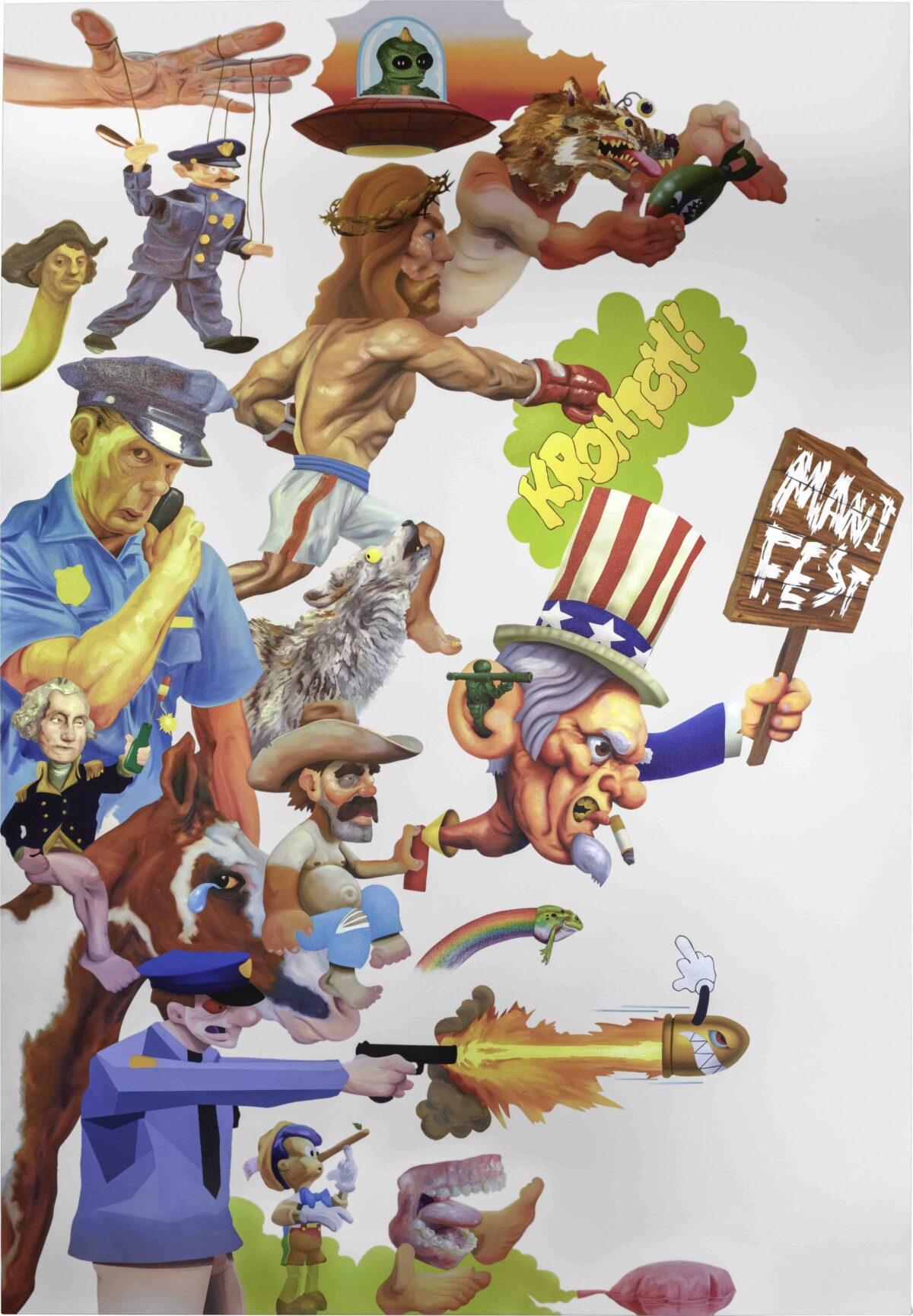 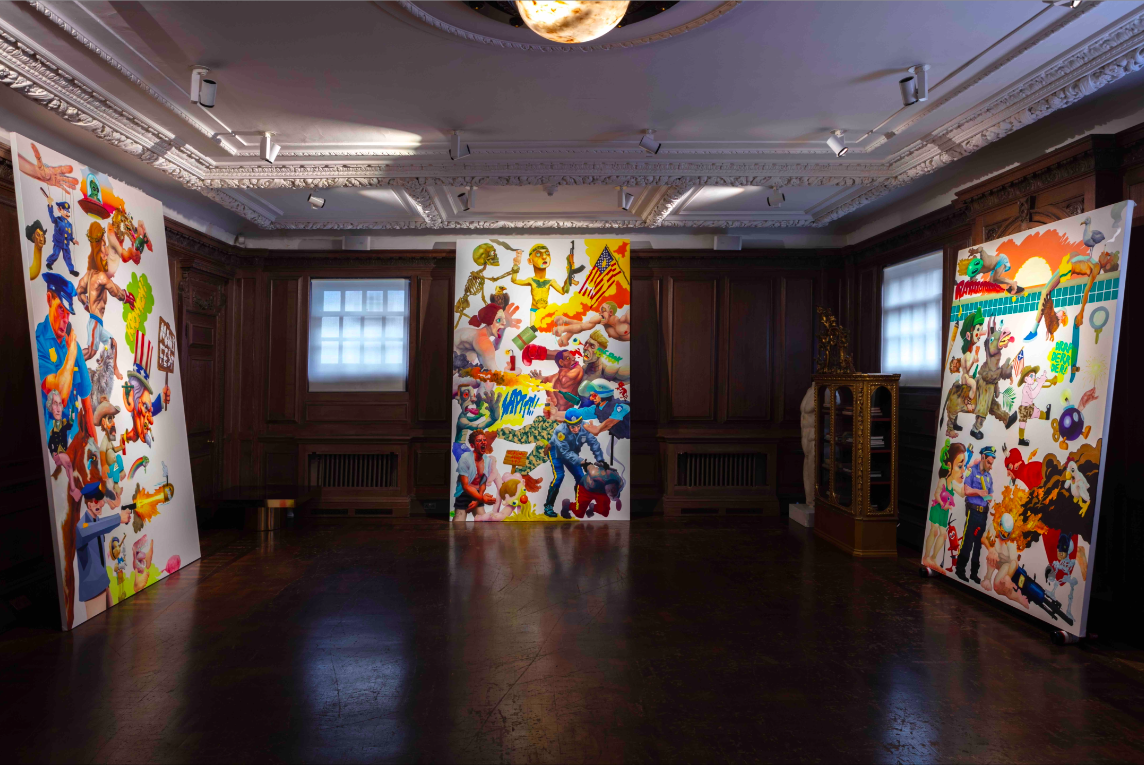 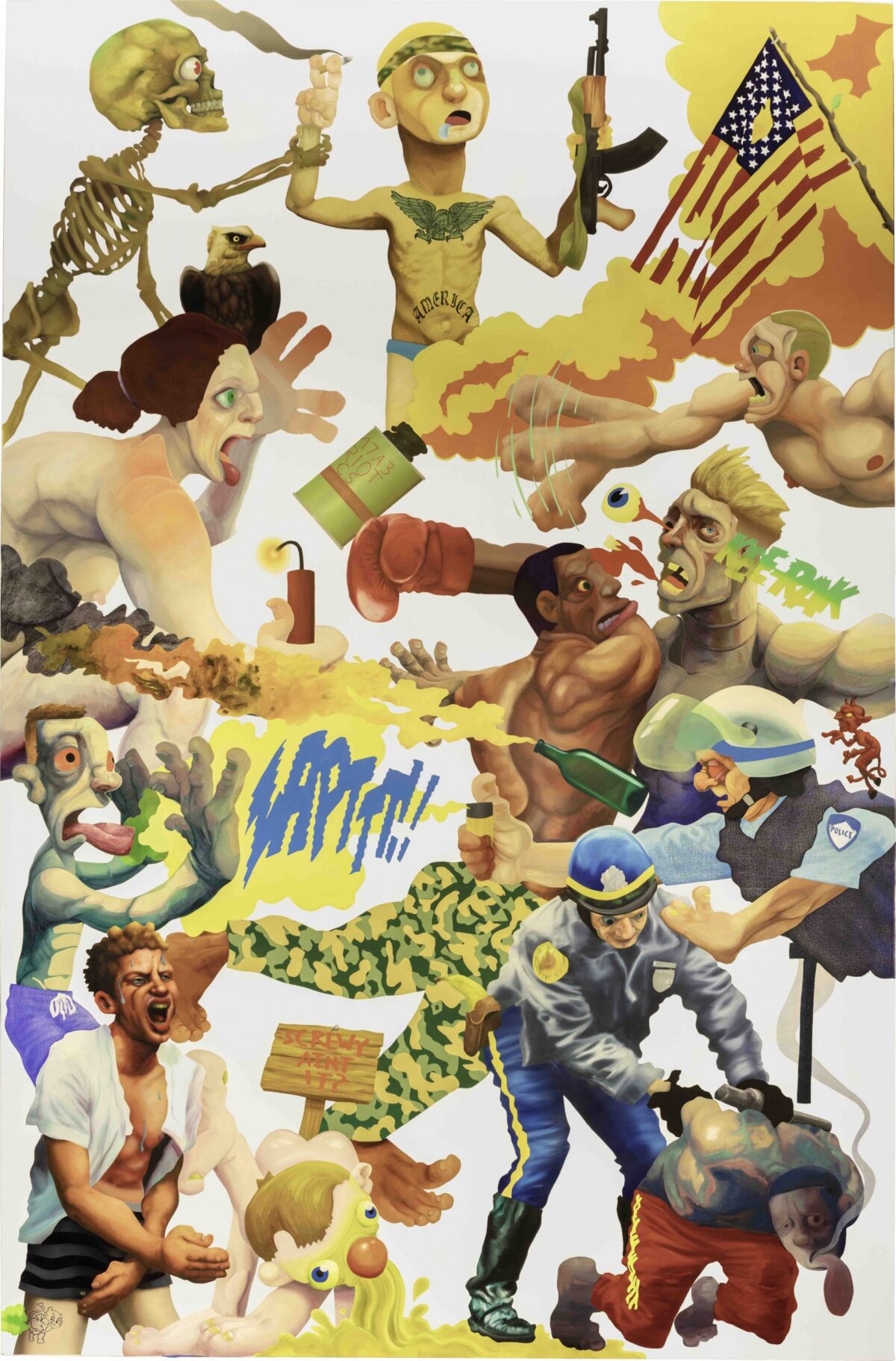 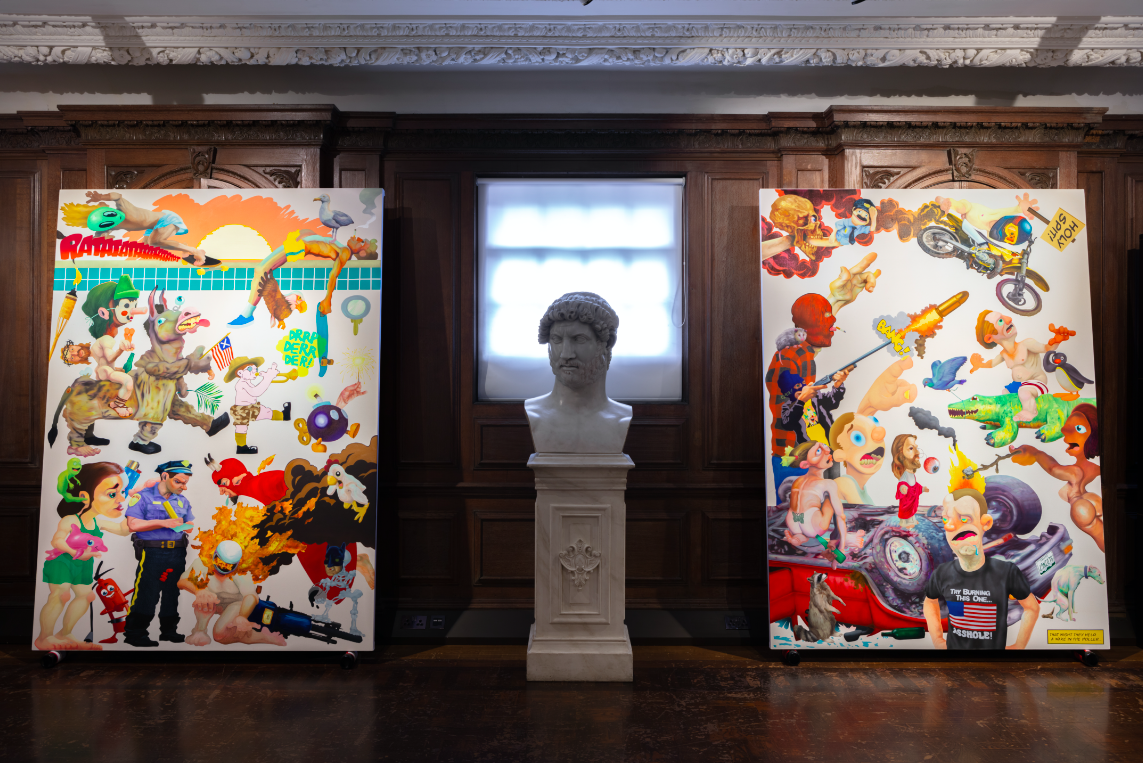 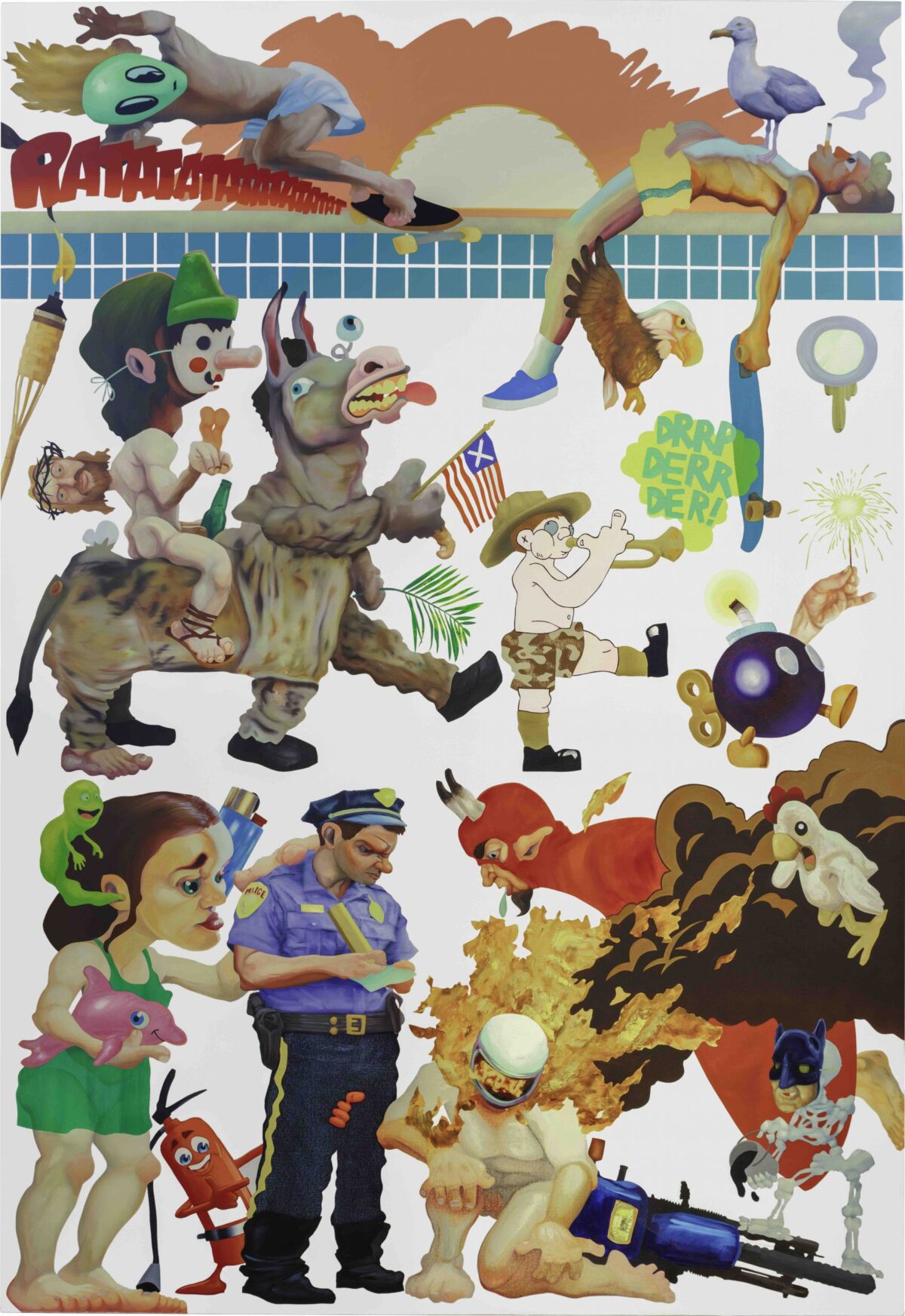 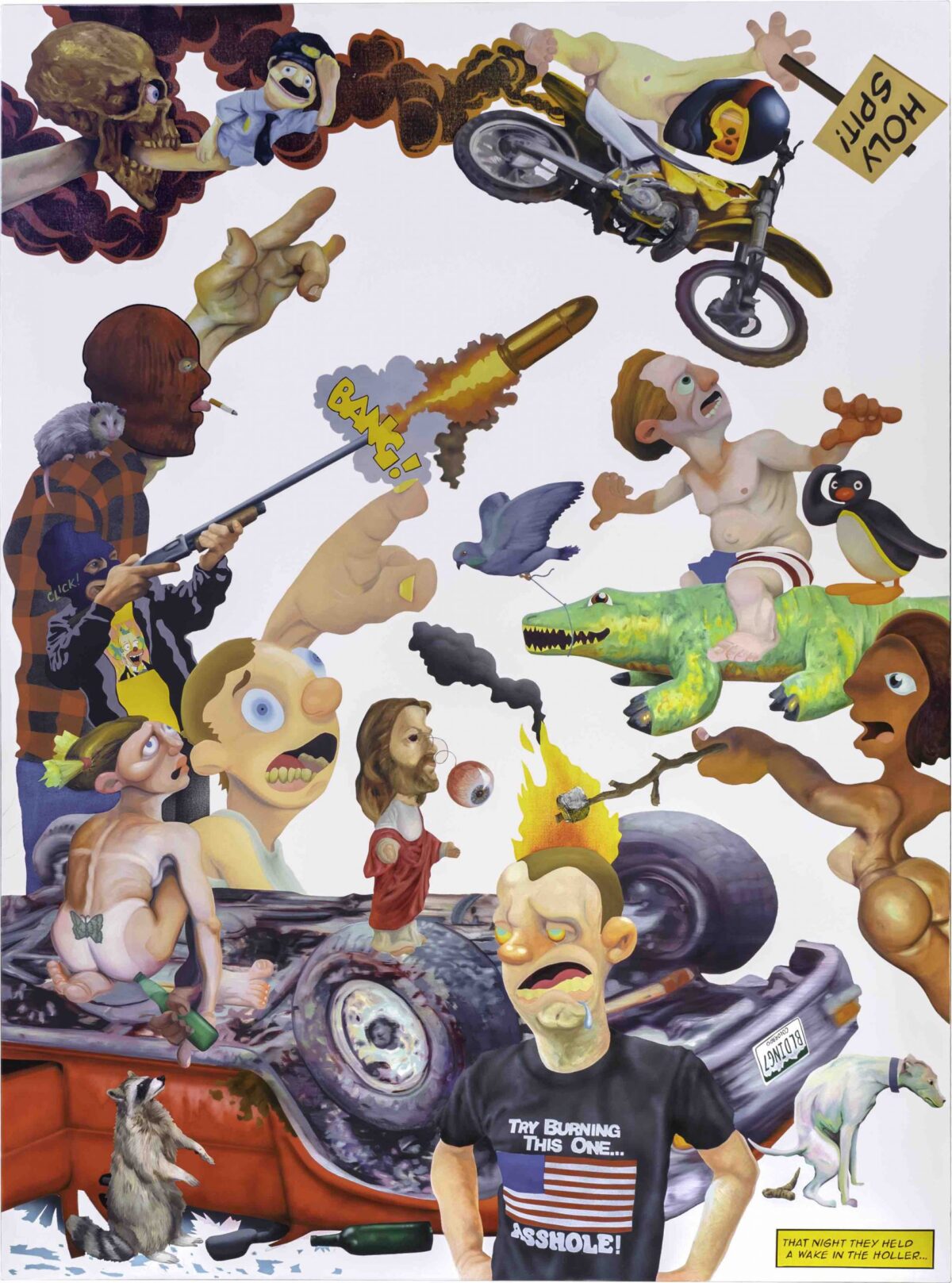 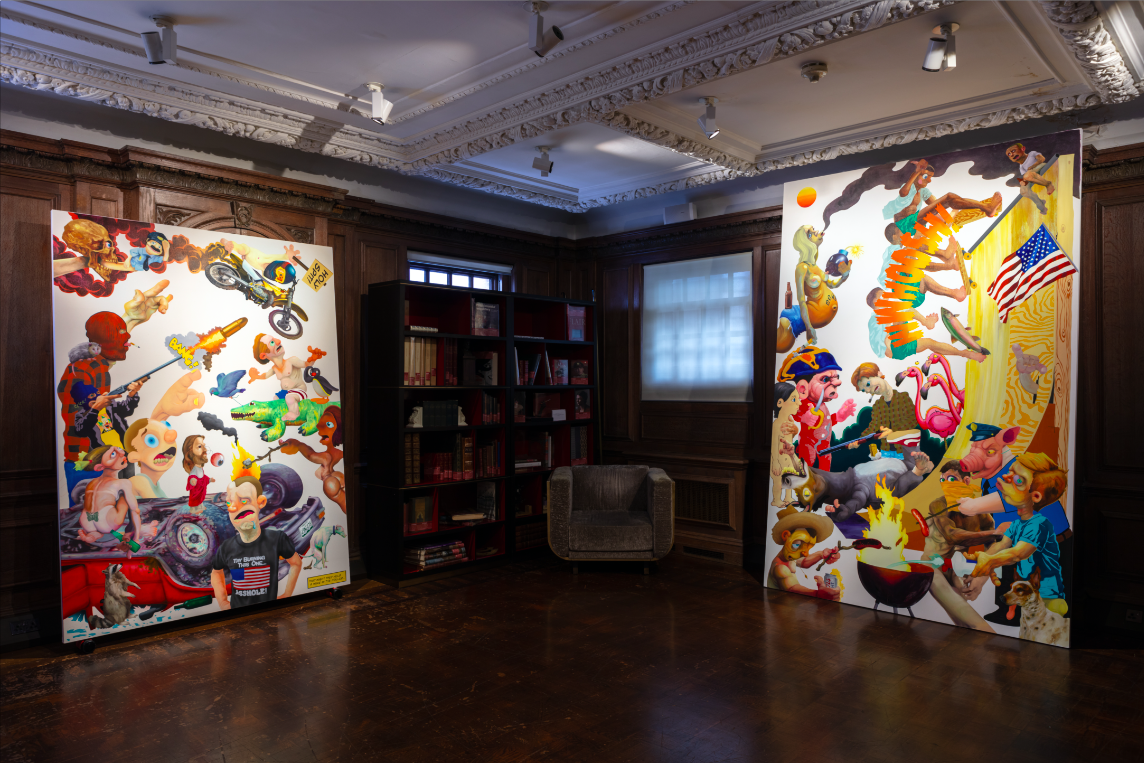 He said his name was Columbus

an’ I just said good luck

The title of Canyon Castator’s show, ‘No Politics at the Dinner Table’ makes me think of the meta, fourth wall-breaking scene in Mel Brooks’ Blazing Saddles[2] when an entire western town’s worth of brawling cowboys spill over into another set shooting what looks like a Fred Astaire genre movie and continue their rumble, this time with dancers in top hats and tails. While it’s a gag and a novel narrative set-up for the time, the implication is that the cowboys are too dumb to know they are acting and just keep beating up whoever they see, on Brooks’ behalf.

In Canyon’s version, an American family is sitting down to a long-awaited meal (God knows we like to eat!) and as a discussion begins to brew about (insert any aspect of American life, it all appears politicized at this point) an elder at the table orders: ‘No politics at the Dinner table!’ and silence ensues. As the camera pans out, the characters from Canyon’s newest suite of five paintings break through the wall-papered wall, knocking over the sideboard and engulfing the room and family in their unfettered, brawling presence. The verbal warning stands as an ineffective stopper, a band-aid and a truly un-self-aware objection, as the culture is too far gone, a reality TV show carnival barker at its head, for the protestation to make any sense at this late hour.

The mood in America right now is of feeling at least disconnected from and at most in total opposition to, the Government. And yet Americans historically haven’t had a popular culture of social political argument. I once sat in a cafe in Paris until the wee hours of the morning arguing with Parisians and Belgians about politics. But Americans have tended to not care as much, or to care in pockets. Is it the size of our country? The fact that we have less representation per capita than other Democracies? We’re litigious and rely on the courts not the Government to settle our scores? I think it’s at least partly that intellectualism is seen as rudeness in the US, it’s not polite to know more than other people.

I was lucky to get the opportunity to draw next to Canyon this summer, in a free-form Draw Jam in a beautiful Southern Italian garden, with a dozen other Artists. Canyon is a natural, intuitive, inspired drawer who invents entire characters from a suggested line, truly intimidating and awe-inspiring to be looking over his shoulder as you try to make something look like anything! It took me back to an earlier visit I had with Canyon at my studio in Brooklyn. We had shared our processes and he described his as starting with formal elements, in the case of a painting, color, and creating figures and loaded objects on the spot, based in the associations of a particular green or brown or yellow occurring to him in the moment. In this way, these paintings that might appear specific and planned, turn out to be expressionistic and reactive, all-over compositions, what a de Kooning or Pollock might have made if they lived in the era of the 24hr news cycle or Twitter.

The forms are painted in a range from cartoon to realistic, usually residing in an uncanny middle ground, reminiscent of 3D animation but most properly described as Pop Surrealism. Who Framed Roger Rabbit?[3] turns out to be an influence for Canyon and you can see it in his novel renderings of figures and objects, combining the real and unreal. The narrative influence of the movie is there too in his affection for creating a range of highly expressive characters.

Canyon texted me that much of his process is also influenced by the rollicking, surreal song, ‘Bob Dylan’s 115th Dream.’ A Dylan fan myself, I looked it up excitedly, thinking I might use a line or two to title this piece. It begins with the narrator reaching land in America with Ahab, the famous whaler from Herman Melville’s Moby Dick at his side and then follows him through various locations in what appears to be 60’s New York City: Bowery slums, a bank, a restaurant, a cab. In every place he finds himself, he has an interaction with someone in which the singer is either not understood or rejected and then unfailingly, a cop shows up. It ends with him deciding to head back to sea and seeing Columbus on the way in. Is the implication a metaphor for Dylan getting somewhere first, artistically? Or is the character so frustrated with the failures and contradictions of ‘the more perfect union’ that he’s giving it up in disgust?

The song unspools the way a dream would, with nonsensical interactions and random characters appearing and reappearing. Canyon’s paintings follow a similar beat. Dylan’s cops appear throughout and for Canyon too, there is at least one in every painting, trying to quell the mostly desperate characters acting out, and reacting as usual, with excessive force. Uncle Sam appears, Jesus appears twice, there are skateboarders, George Washington, along with weapons, fire and explosive devices, and is that Ahab (?) red-faced and Napoleonic, in his red long underwear.

It turned out it was much more difficult than I originally thought, to isolate a few lines of Dylan’s song, to serve as a heading for this essay. The song functions as such a complete whole with various elements supporting or referring to themes that came before or after. In the same way, you couldn’t extract a figure or two from Canyon’s paintings without taking out a huge section of the painting, they are symbiotically and narratively entwined with each other. If you tried to remove one or contemplate it on its own, the meaning would be lost. Canyon’s characters go about their grim tasks alone and yet fully dependent on each other.

There is an interesting orientation to Canyon’s figures, most seem to be facing East, intriguing because Canyon makes them on the West Coast, in Los Angeles and because in the piece ‘Moving Right’ (Oil and spray paint on canvas, 2018) Uncle Sam holds a ‘Manifest!’ (Destiny) flag (I at first mis-read the command as manfest.) The common personification of the U.S. Government leads the charge to the right, but also…Eastward, as though undoing or reversing the Westward expansion of the original ‘Manifest Destiny’ aspiration. If the original settlers were trying to create a ‘kind of heaven,’ by expanding West across the United States, it’s clear that Canyon’s advancing characters are moving backwards, through a kind of hell of their own making.