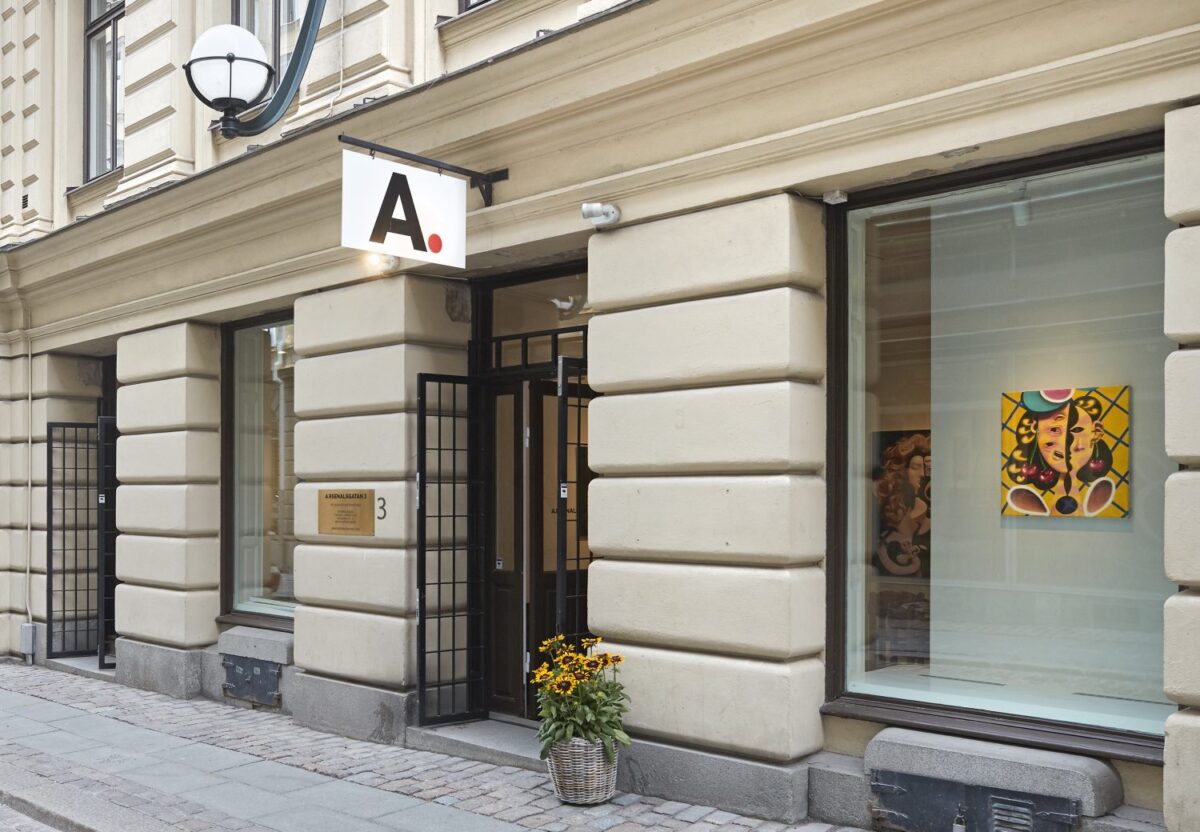 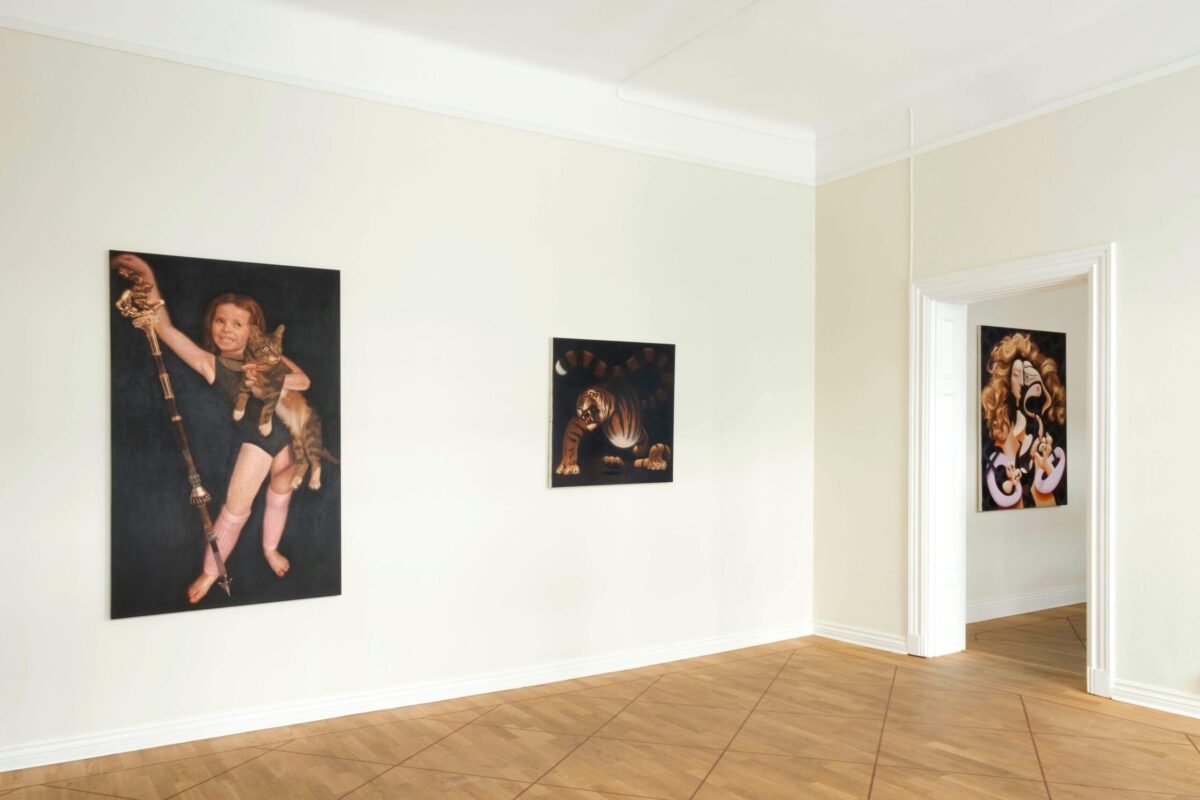 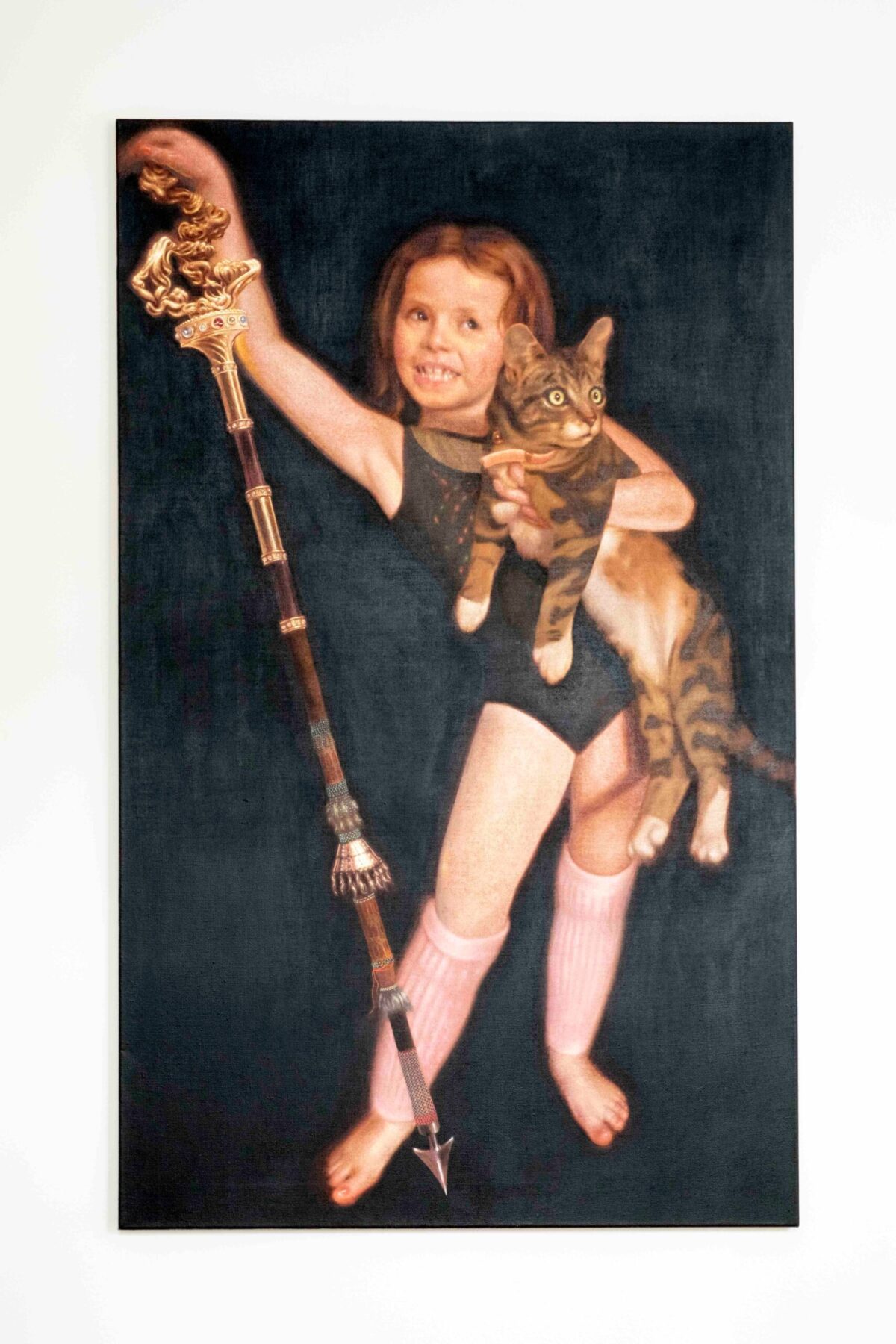 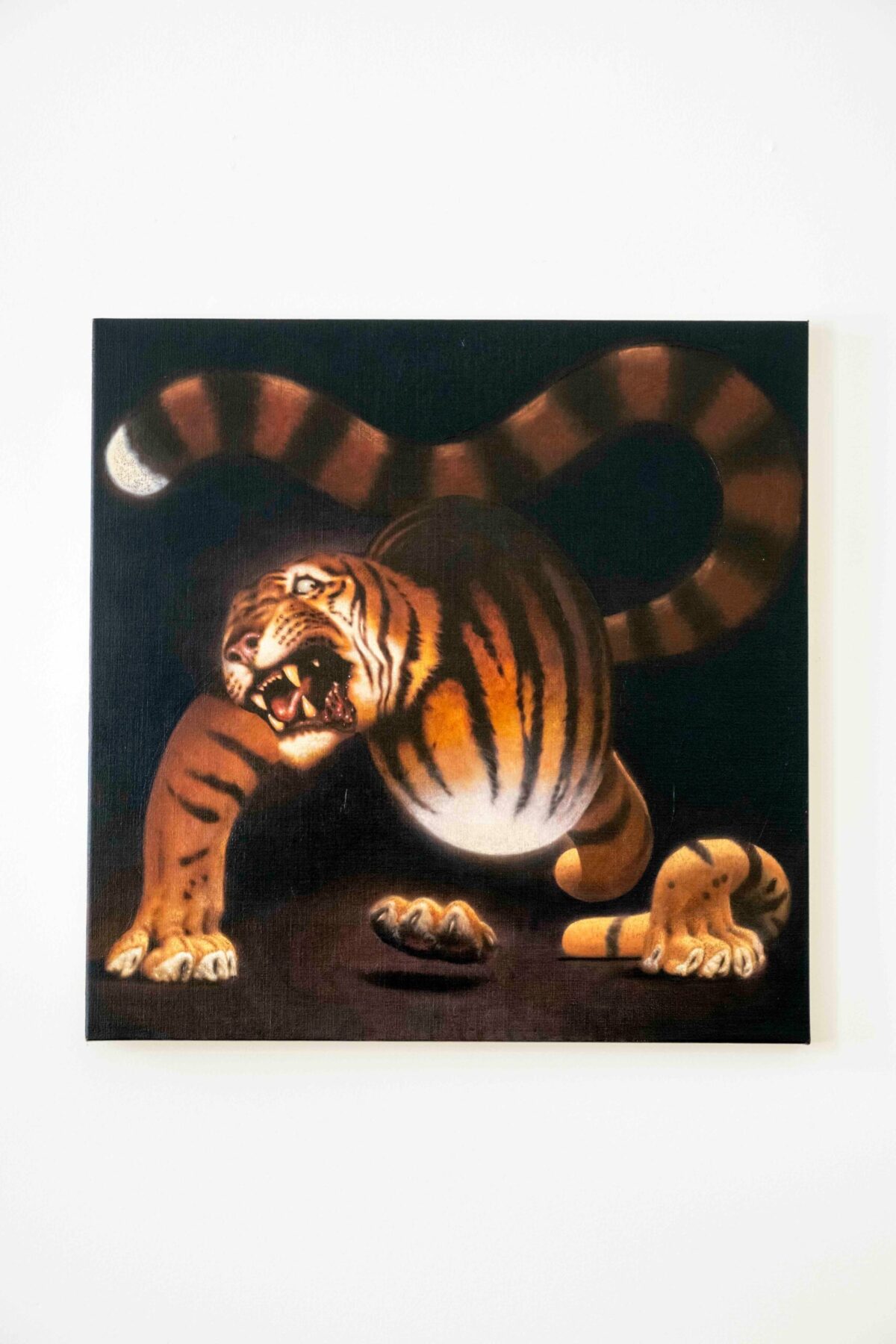 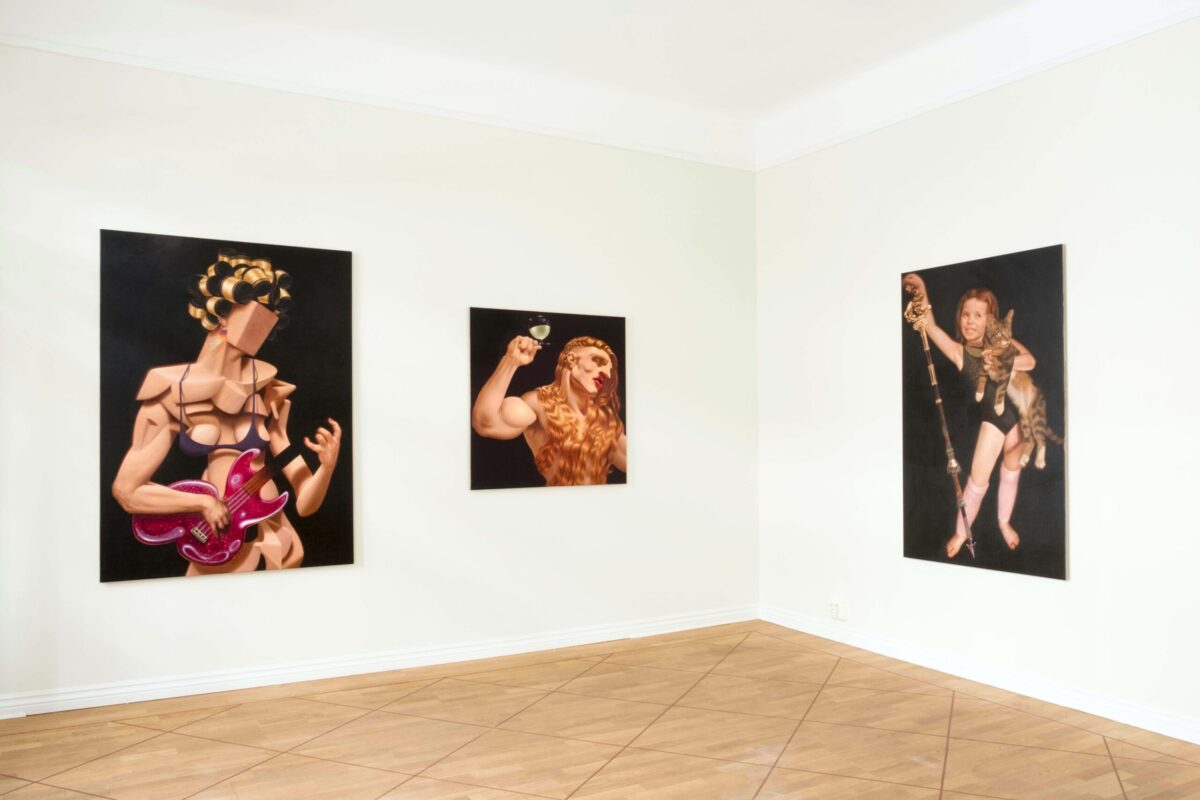 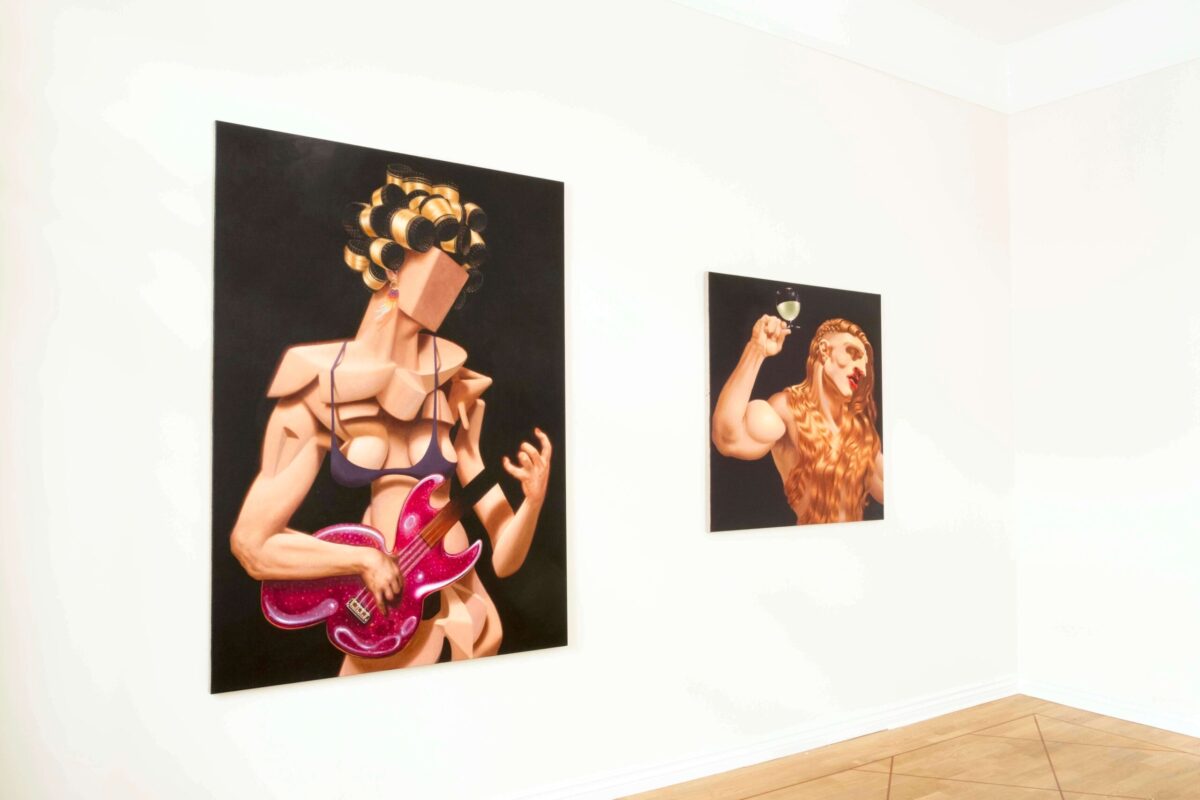 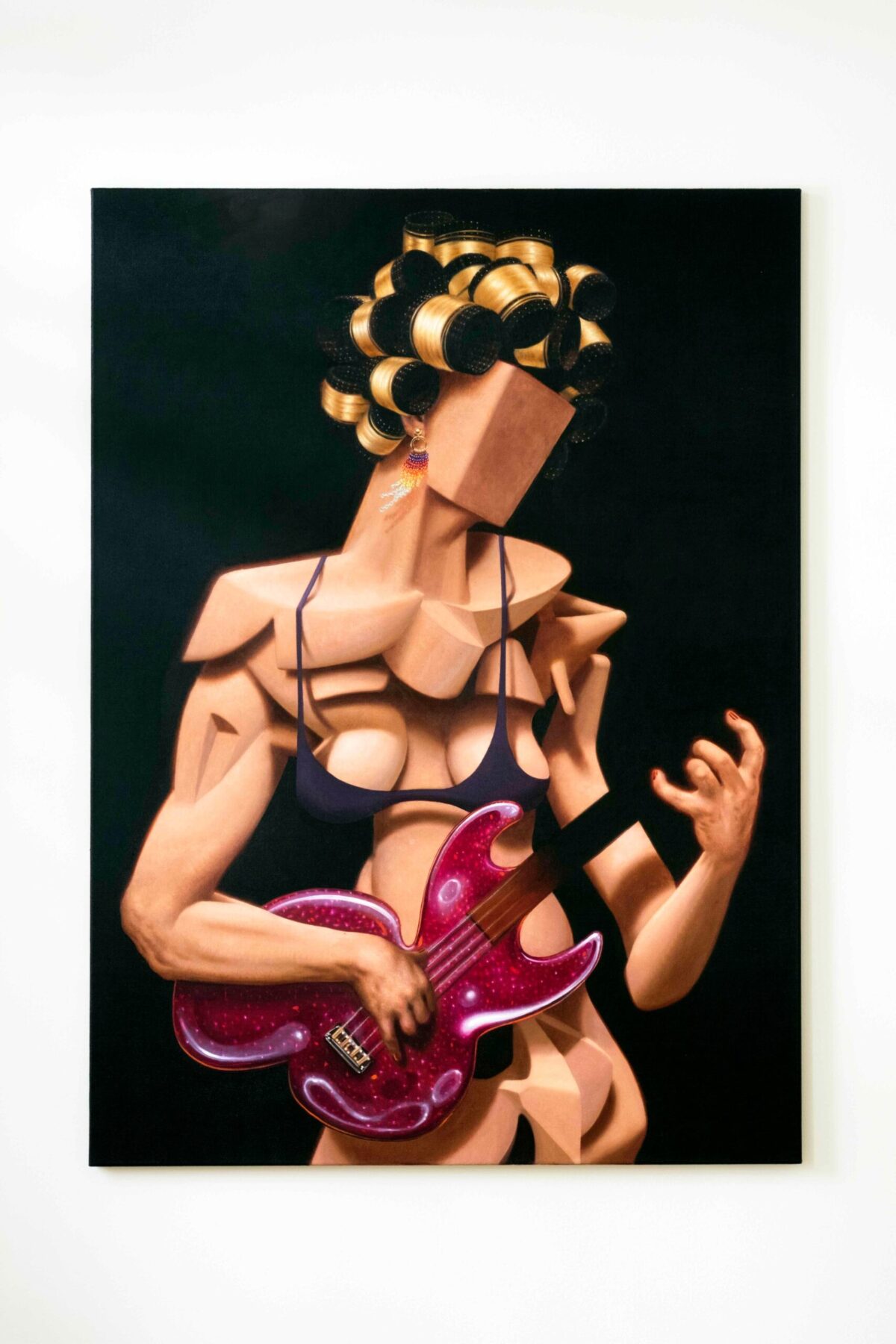 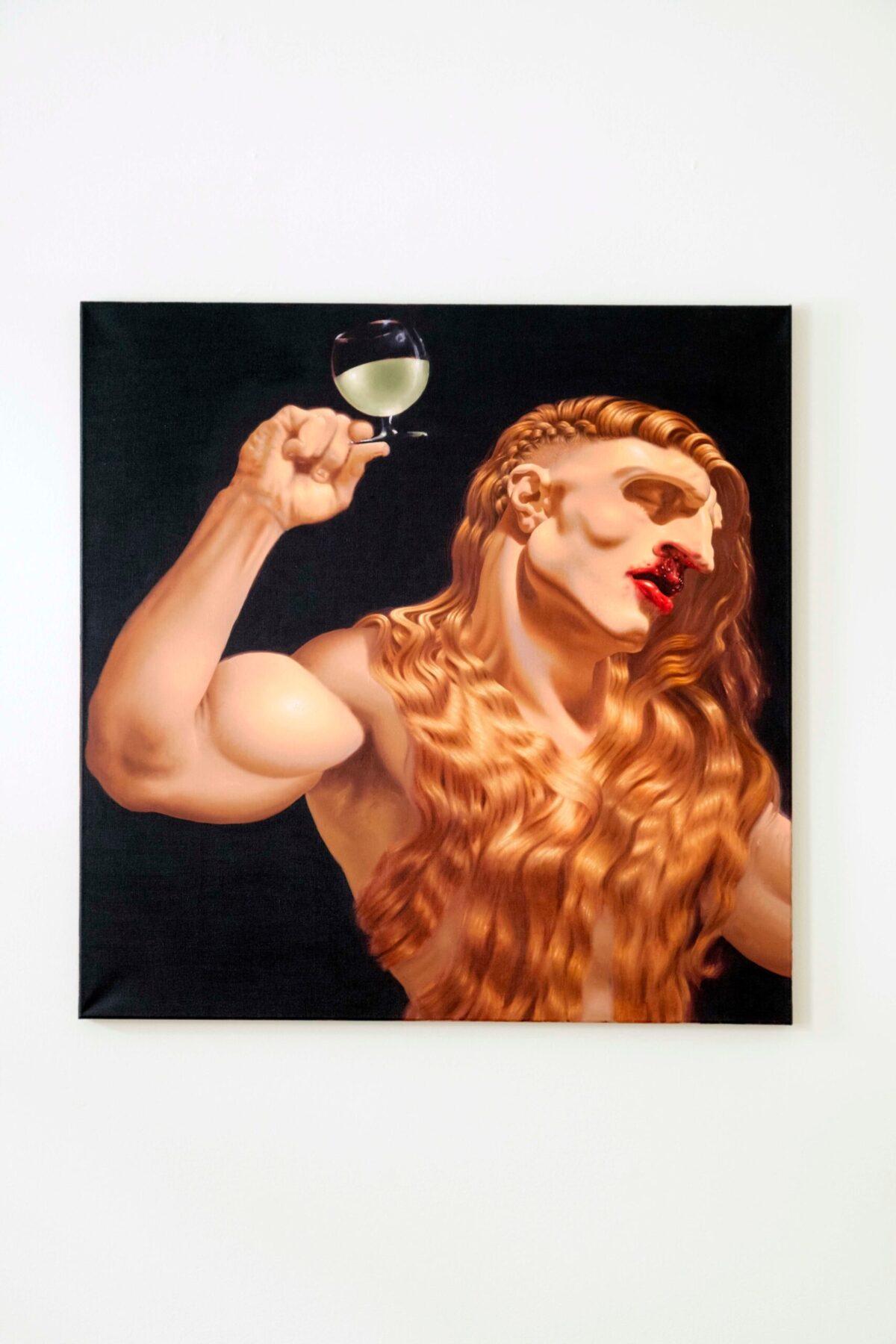 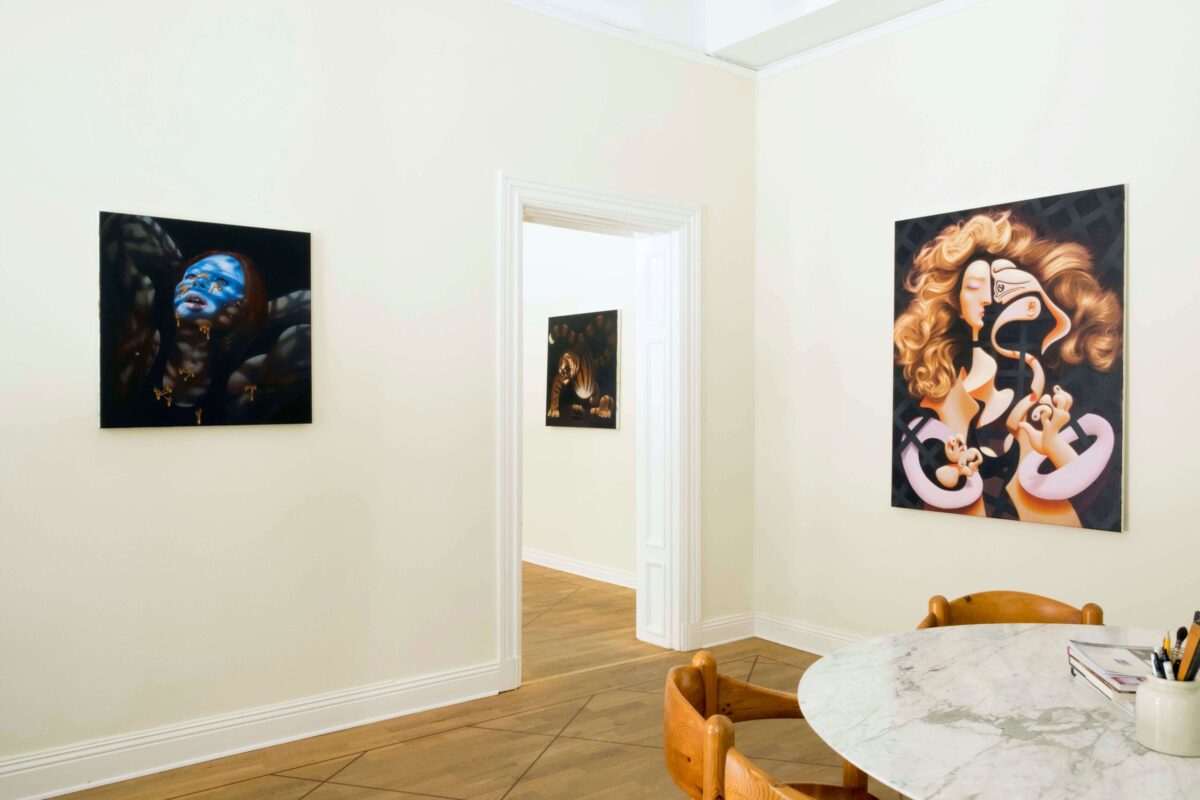 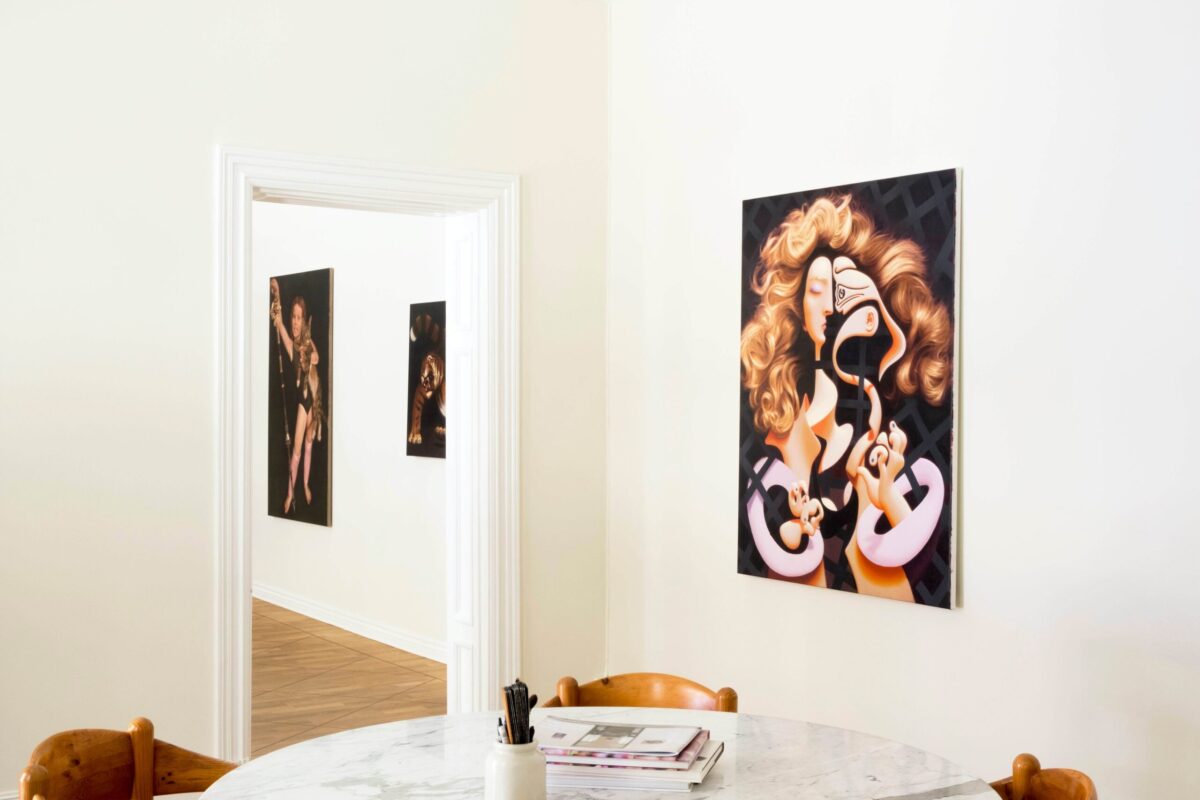 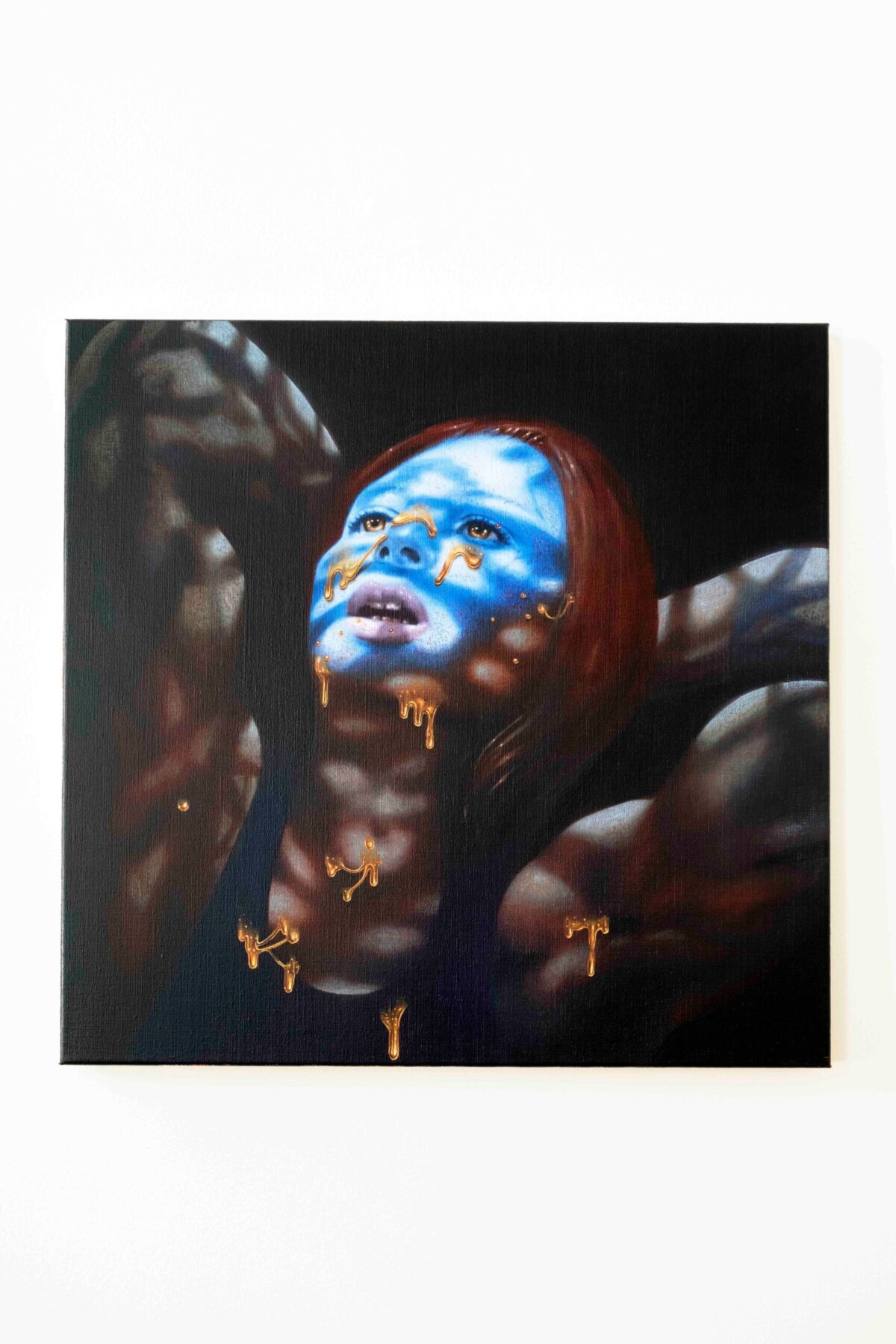 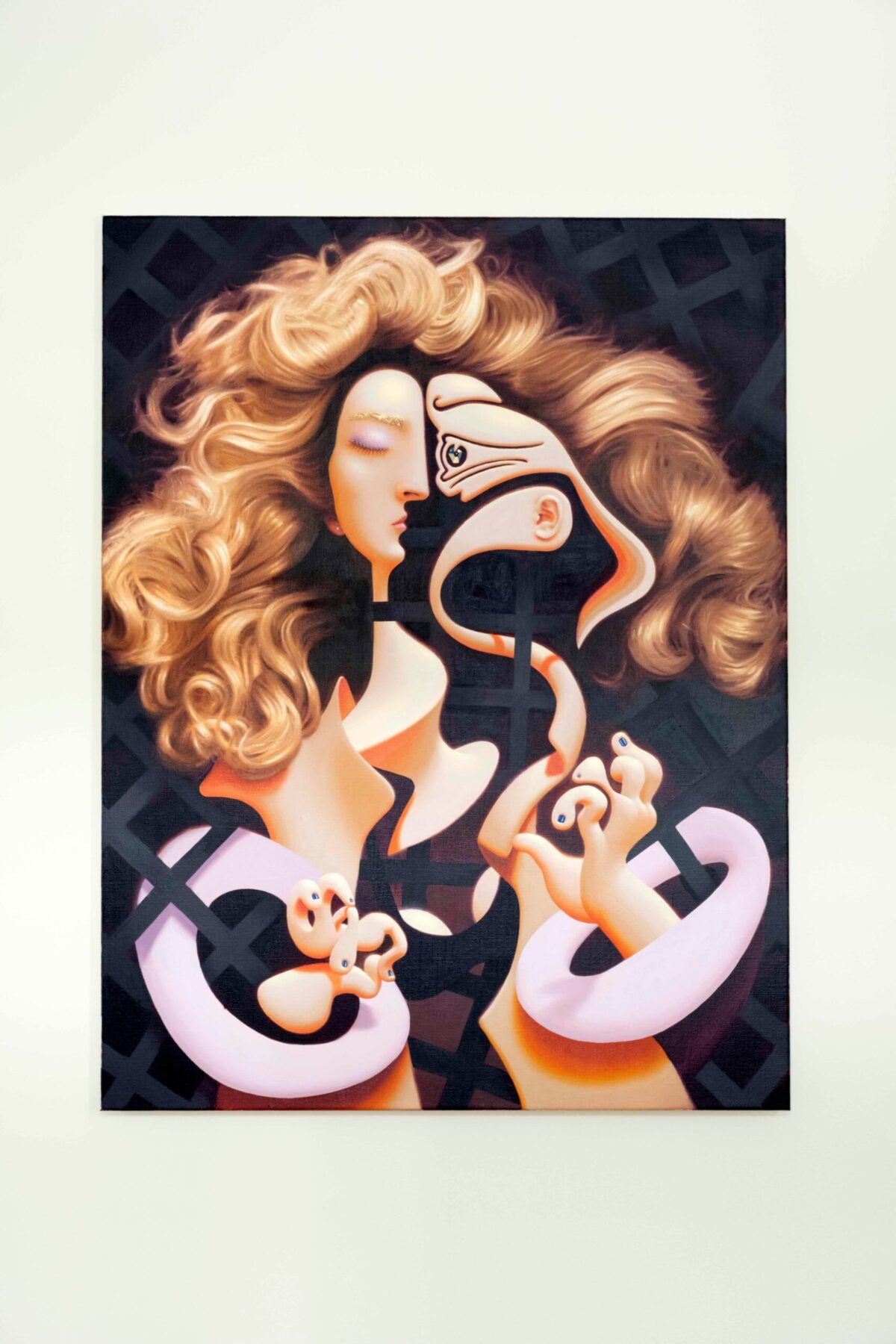 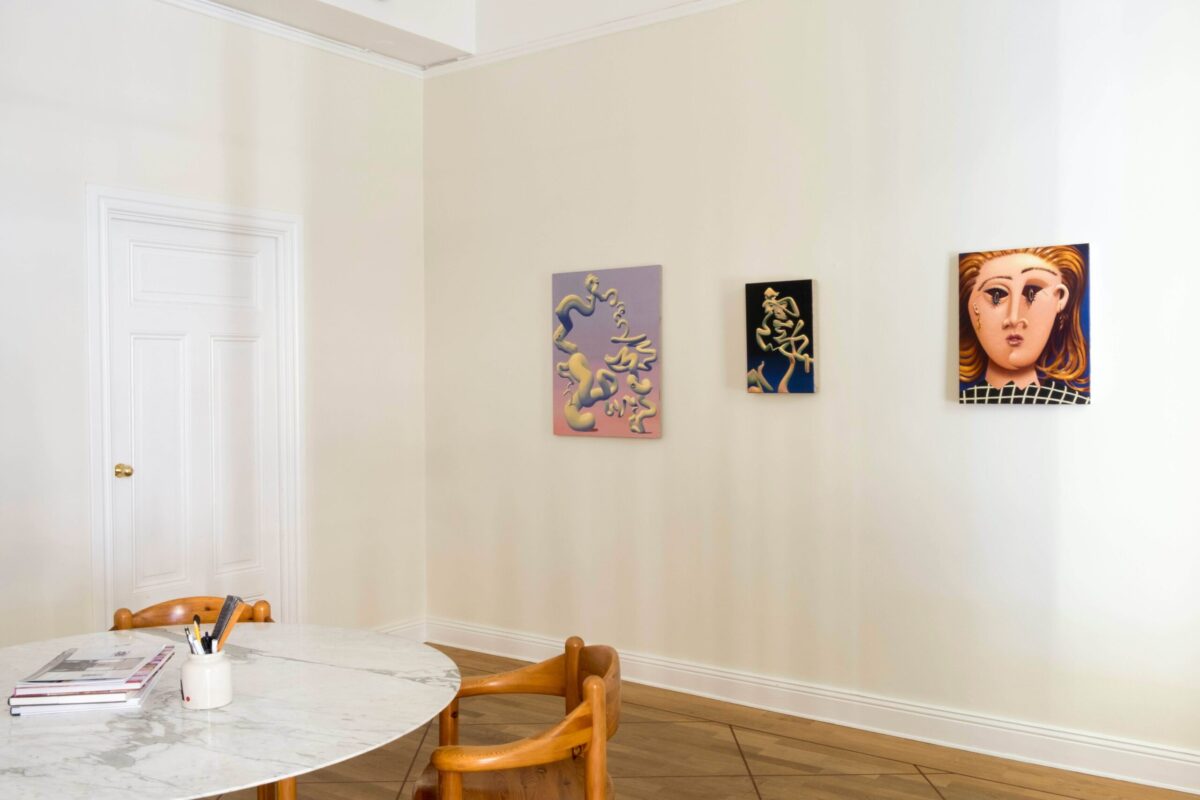 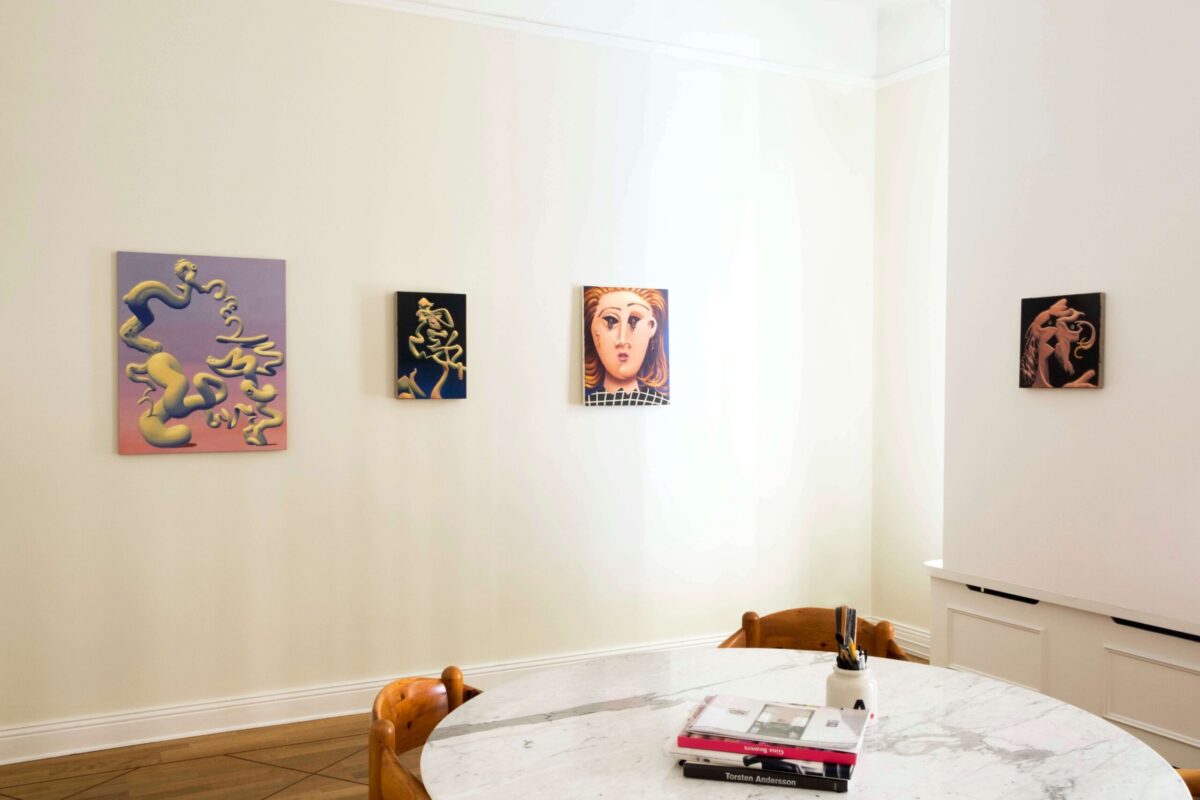 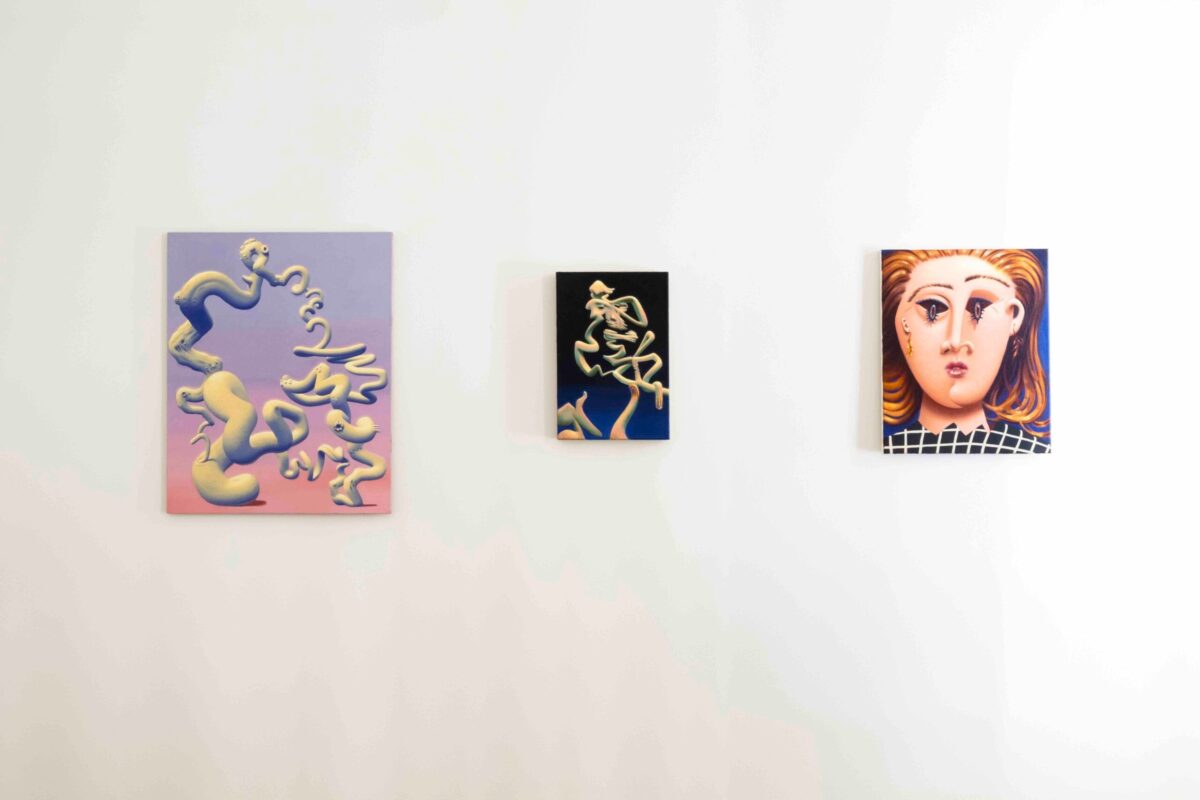 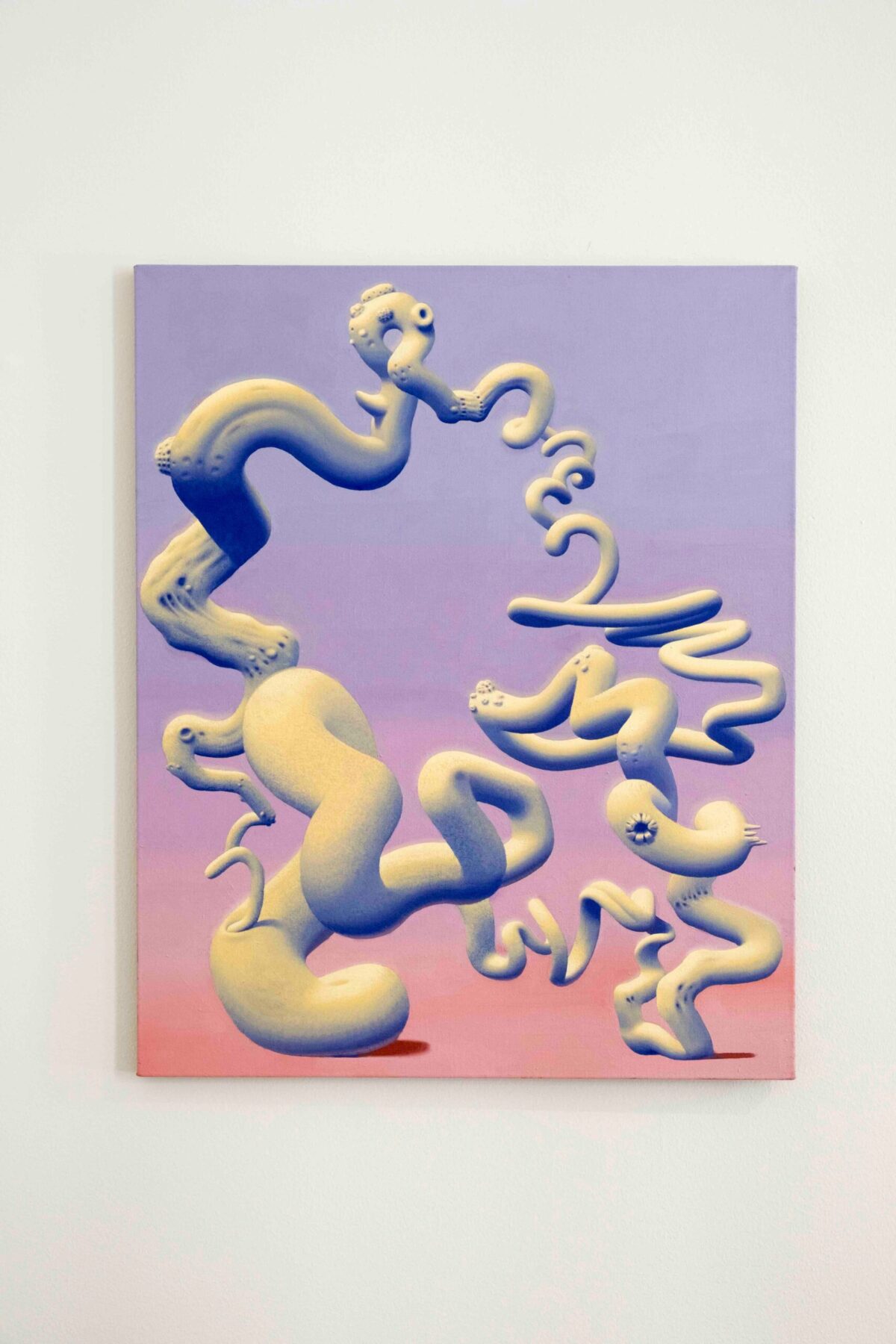 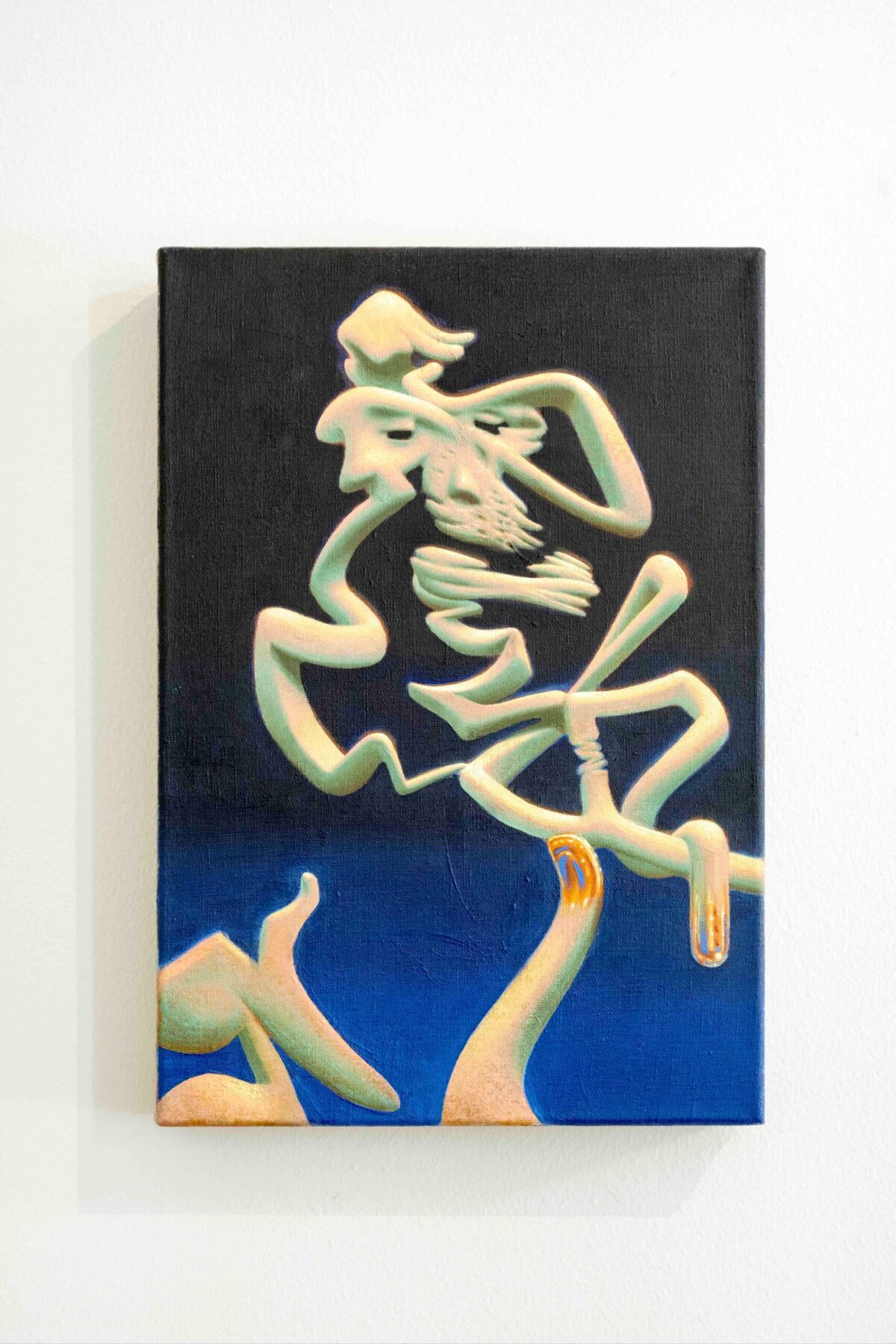 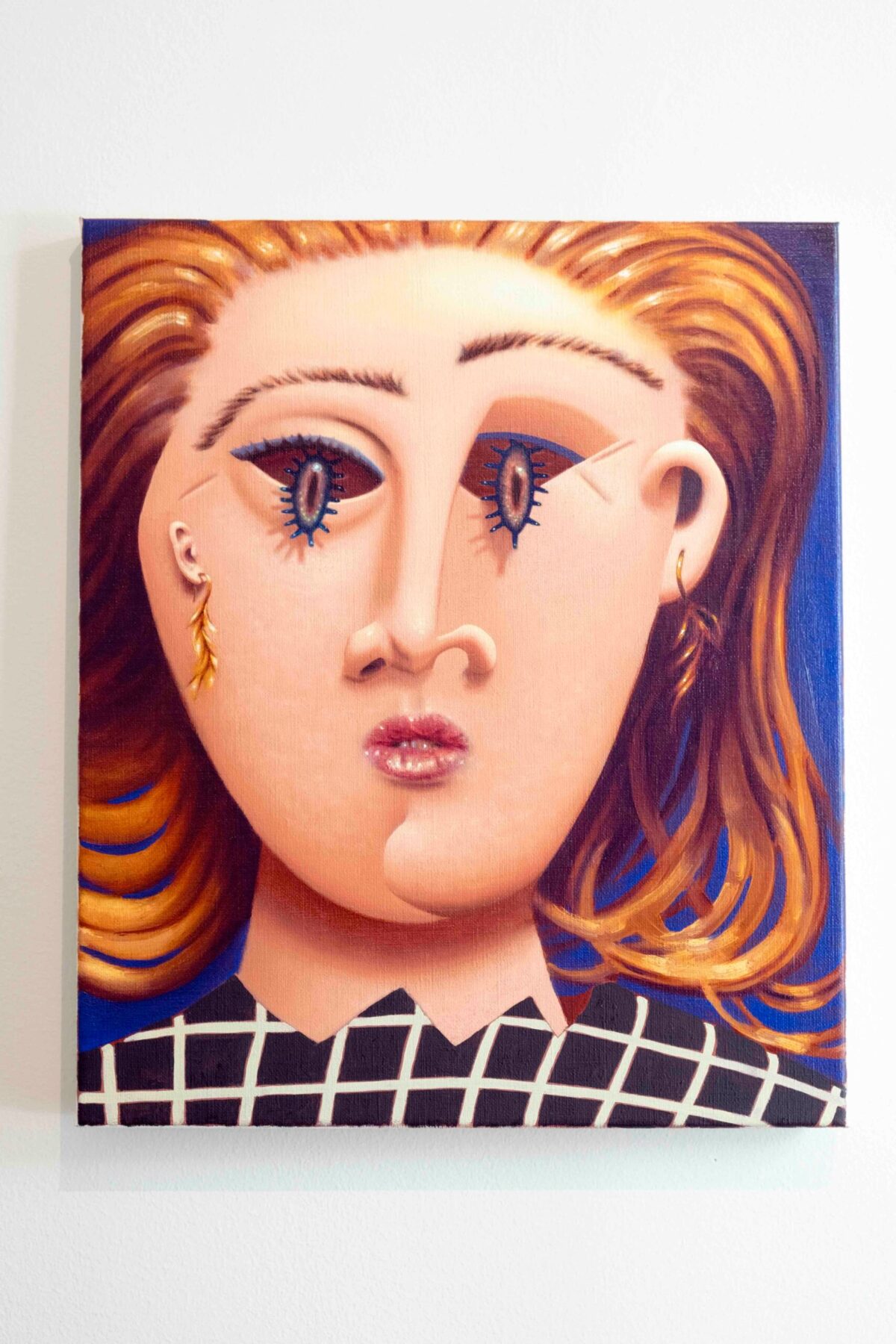 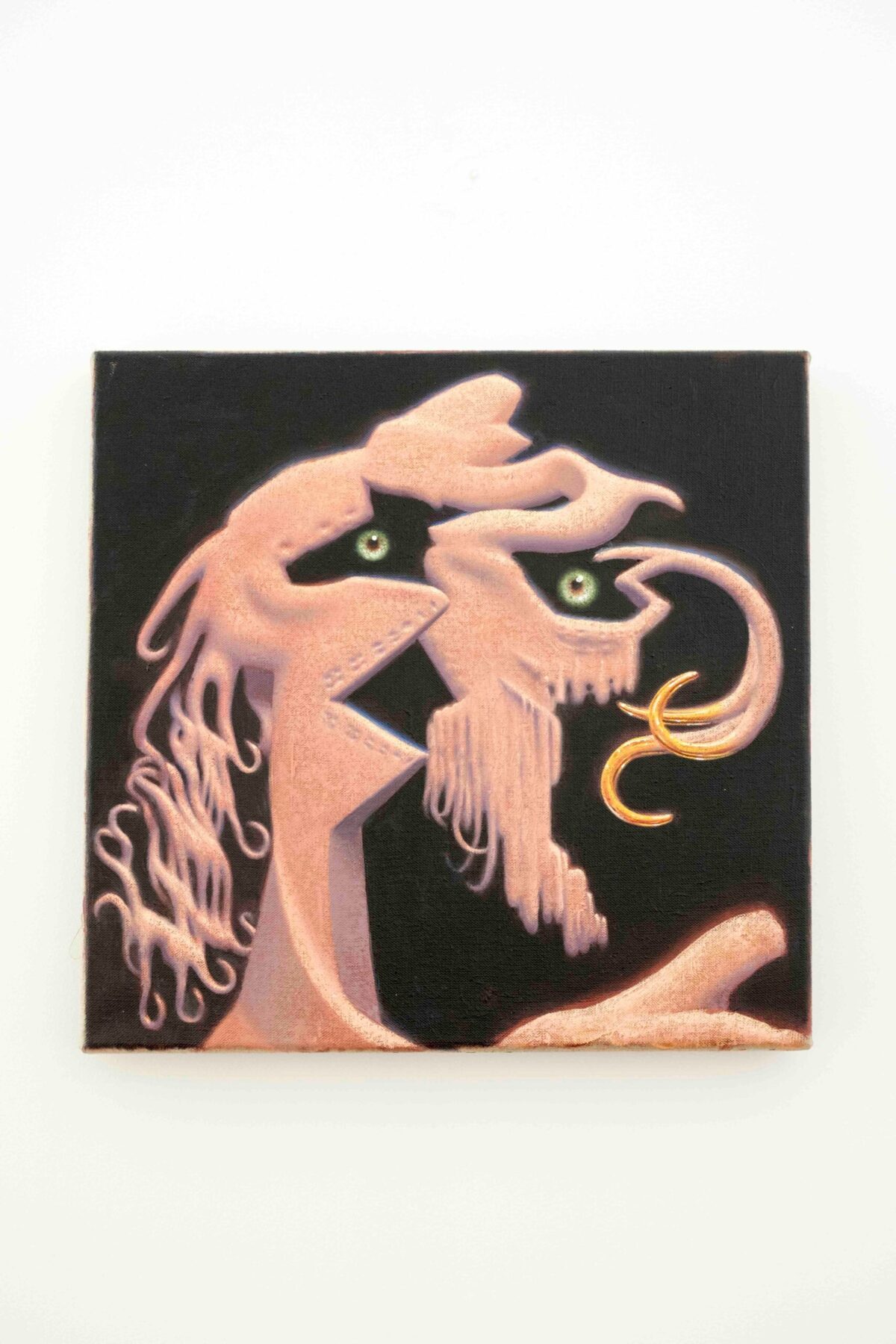 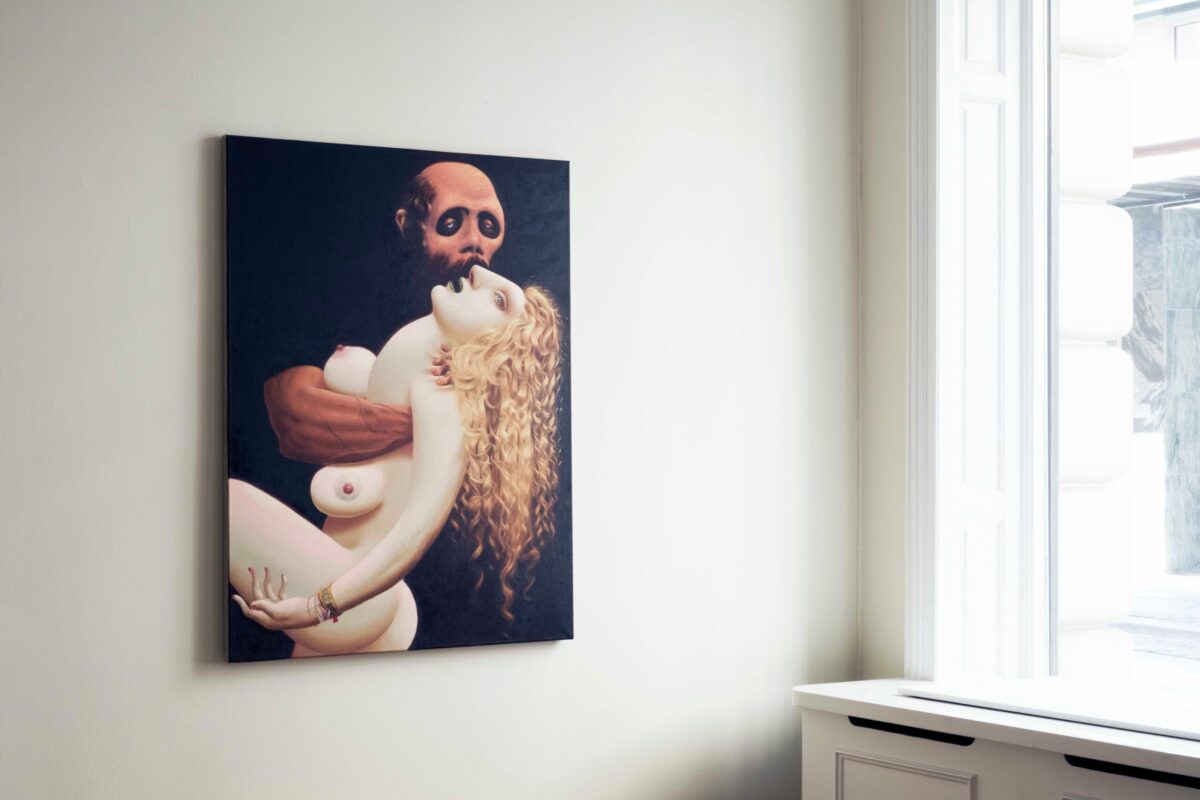 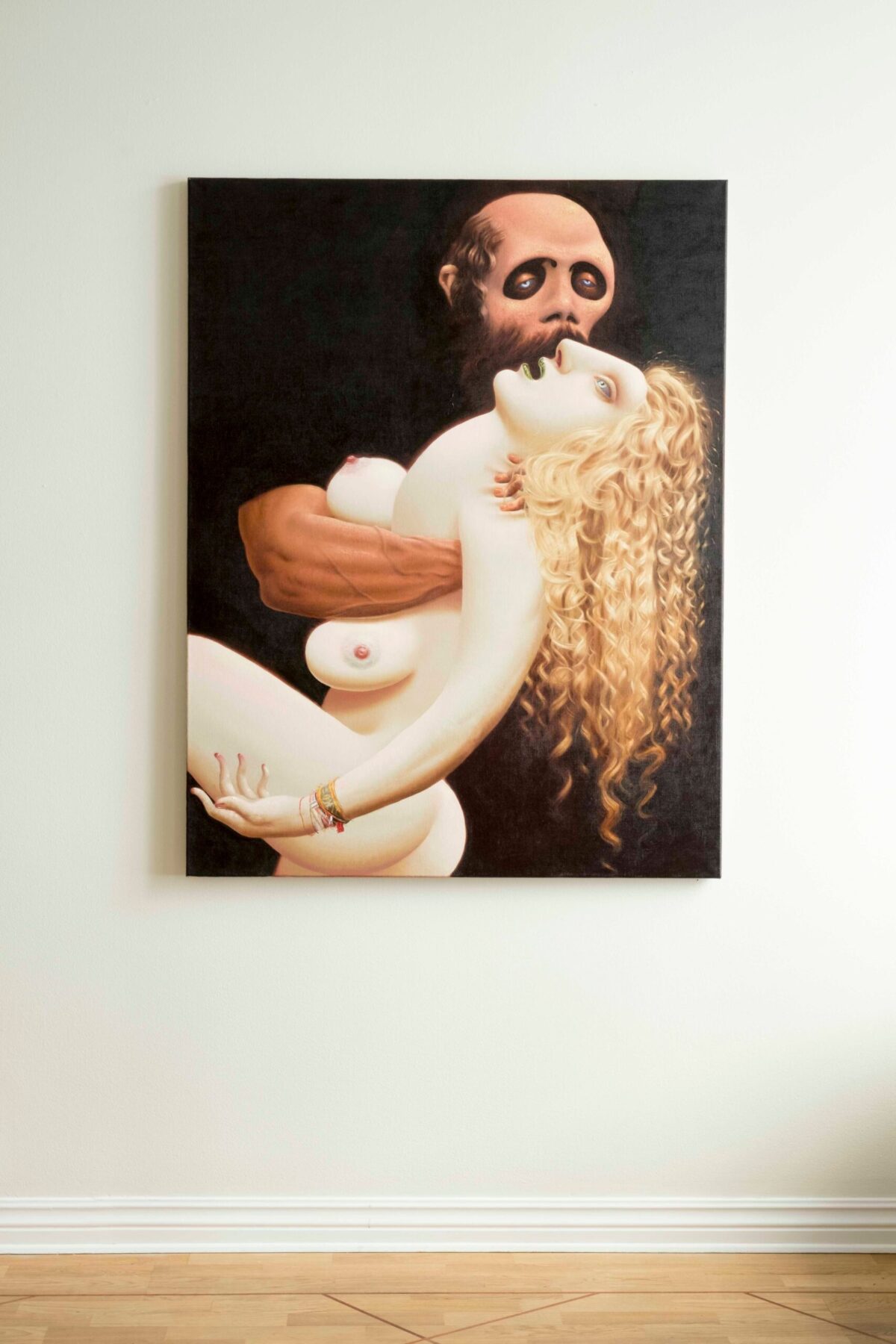 Simply put, glimpsed in darkness, a sombrero worn at midnight probably isn’t quite right, probably; it demands a double take.

This is how Ben Spiers’ paintings perform, emerging from and receding into shadow. I’m never sure of what I’ve seen.

I’ve always found Ben’s paintings slippery; like how it might be if I dared to try and hold mercury – I won’t quite get hold of it, but if I could, I assume it will poison me, or destabilise my mind. And yet I still want to.

A double take is fast and slow, visceral and cognitive, upsetting, then…delightful? I remain unsure about that last part but feel confident that is how Ben likes it.

His paintings seduce and interrogate me with equal force, so I thought it best to just ask him about them, avoiding them to start with. We spoke for two hours. I learned a lot. I know nothing.

I had a hangover that day; Ben and I share the same birthday and we talked the day after. On reflection, I don’t know if the way I felt was the cause or effect of the trajectory of our chat but going through it felt just like looking at his work.

Ben nudges and teases the edges of thoughts and sentences in much the same way I imagine he gently coerces paint. The confluence of raw instinct and deliberate premeditation left me in a state of epistemic bankruptcy, after which I actually felt purged of my hangover. I felt lighter.

I share with Ben an appreciation for the giddy feeling of uncertainty, because saying, “I don’t know” is a ruthlessly honest and liberating admission. It’s exhilarating because a boat without a rudder just is more exciting. More than that, it’s crucial. Certainty and dogma run along a straight line. By contrast, Ben is a free-range thinker with a free hand.

None of this is to say he doesn’t know what he is doing. Instead, with a virtuosic hand that indiscriminately reaches across time, place, fiction and reality, Ben helps himself to familiar things, remaking them until they are not familiar at all, and you realise they never were. The relationship between signifier and signified is so vulnerable because it was only ever arbitrary. Ben excavates the indeterminacy of all things. With his brush he whispers to the prima materia, perhaps not knowing what form it will take in its reply. What I see in these paintings is the simultaneous confabulation and decomposition on which my perception of reality supervenes. And that is a reality that compelled us to discuss Will Ferrell, Copernicus, Penn and Teller, Wittgenstein, Philip Larkin, Hull, swamps and Mike from Breaking Bad in a concatenation that probably did make sense at the time.

I keep coming back to that duck-rabbit illusion, where you can never see both animals at the exact same moment, even though they both exist in the exact same ink. Ben’s paintings do something like that. For instance, in The eponymous work in the show, ‘Midnight Sombrero or Danae and Zeus’,

I might be seeing Barbara Streisand lending the chiaroscuro of golden age cinema but the pose also conjures the Ecstasy of St Teresa. The golden shower will doubtless elicit unsubtle fantasies only thrown off course by the title, should you choose to consult it: so, is it a bodily fluid or is it molten metal in the end? The painting will constantly assert and undermine an answer, never letting you take refuge in cognitive dissonance.

At a glance Ben might appear to be a polemicist. Sometimes I see a new painting and I marvel as much at his unadulterated skill as his willingness to run across very thin ice, underneath which dwells an abyss of unease: the body, gender, sexuality, race, class, cultural appropriation etc, etc, – controversy abounds. But Ben’s fancy footwork keeps him from the plunge. And it seems that if you find yourself in freefell you only have your own faulty perceptual apparatus to blame. Because nothing is quite what it seems.