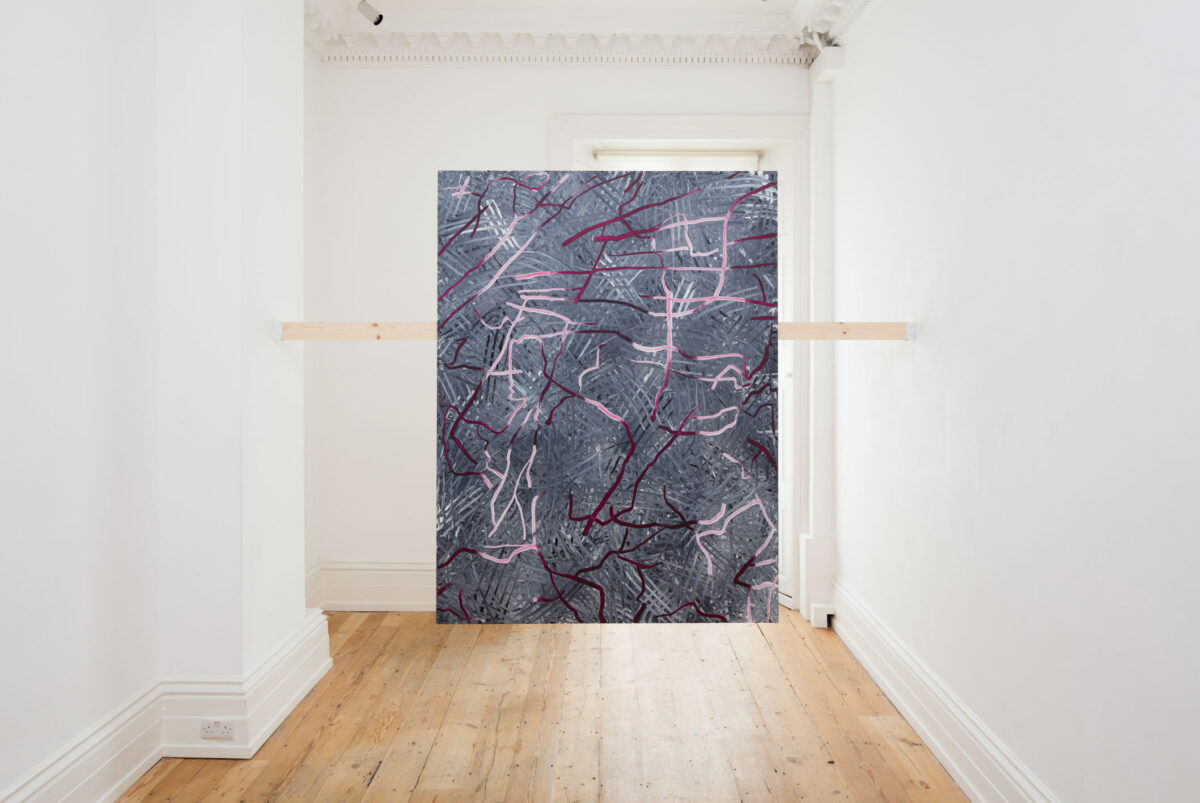 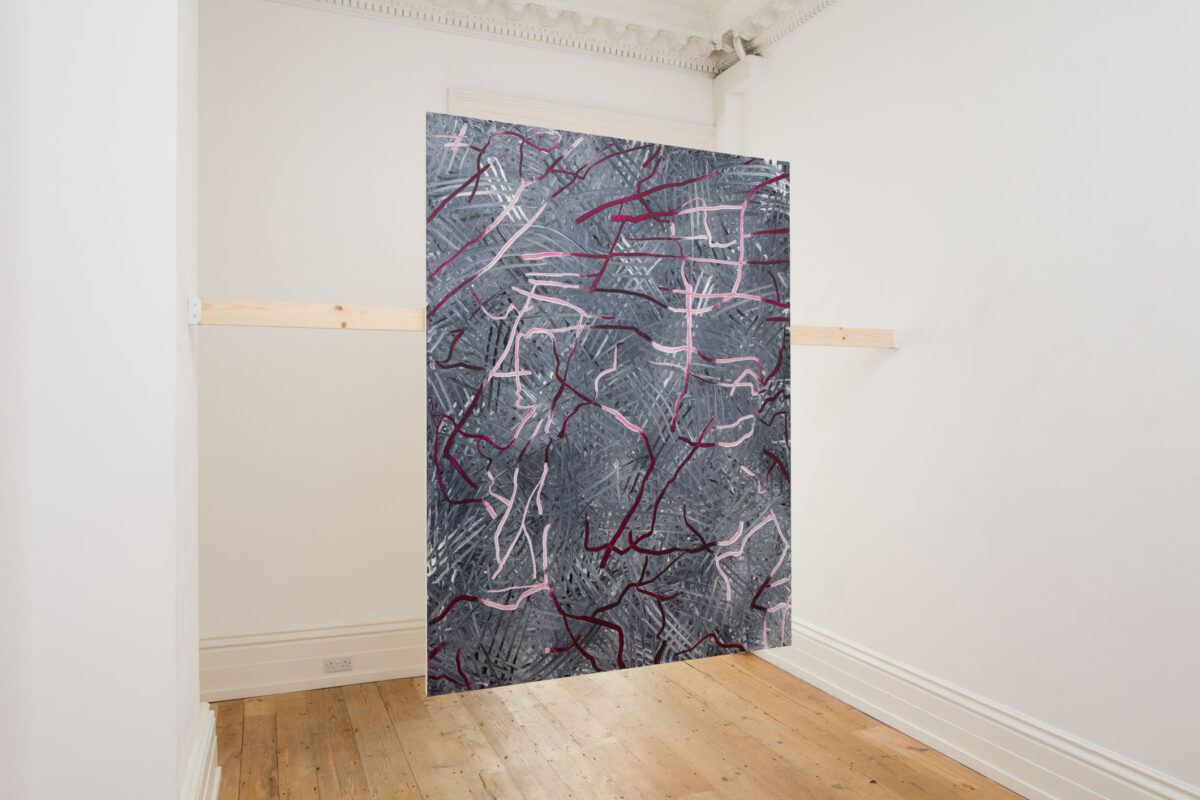 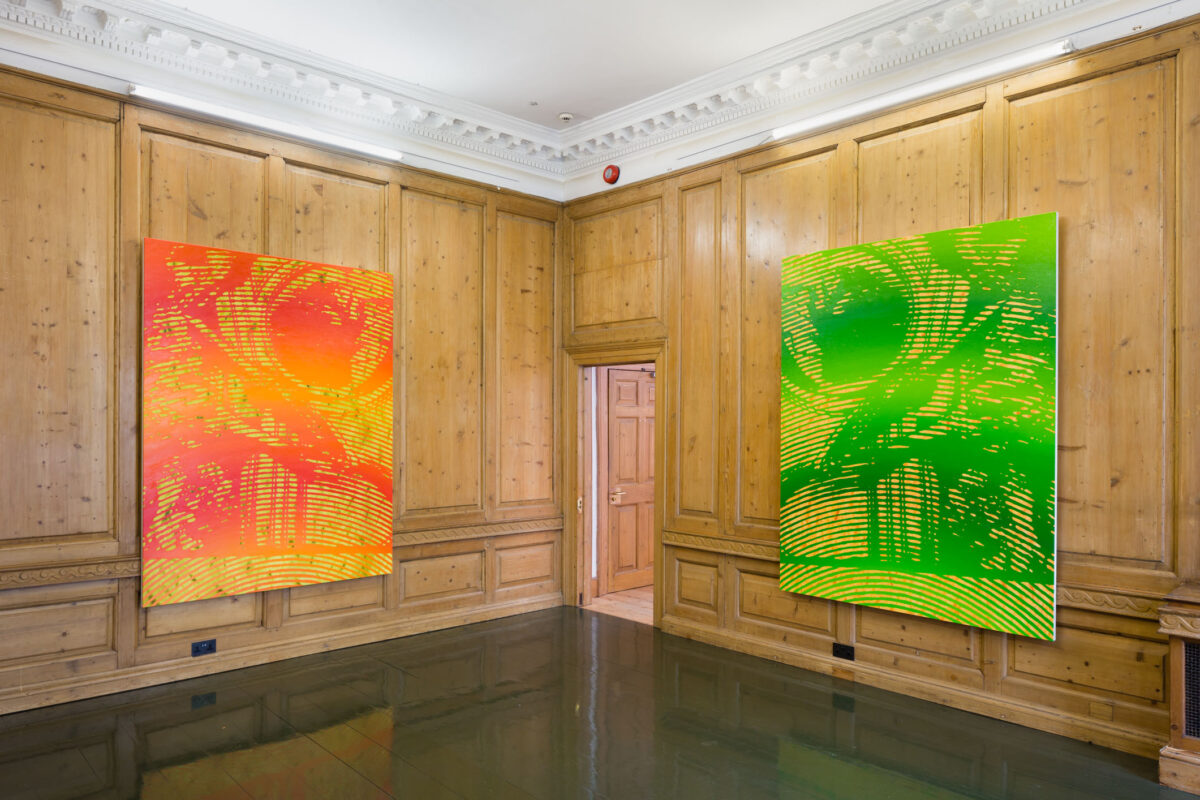 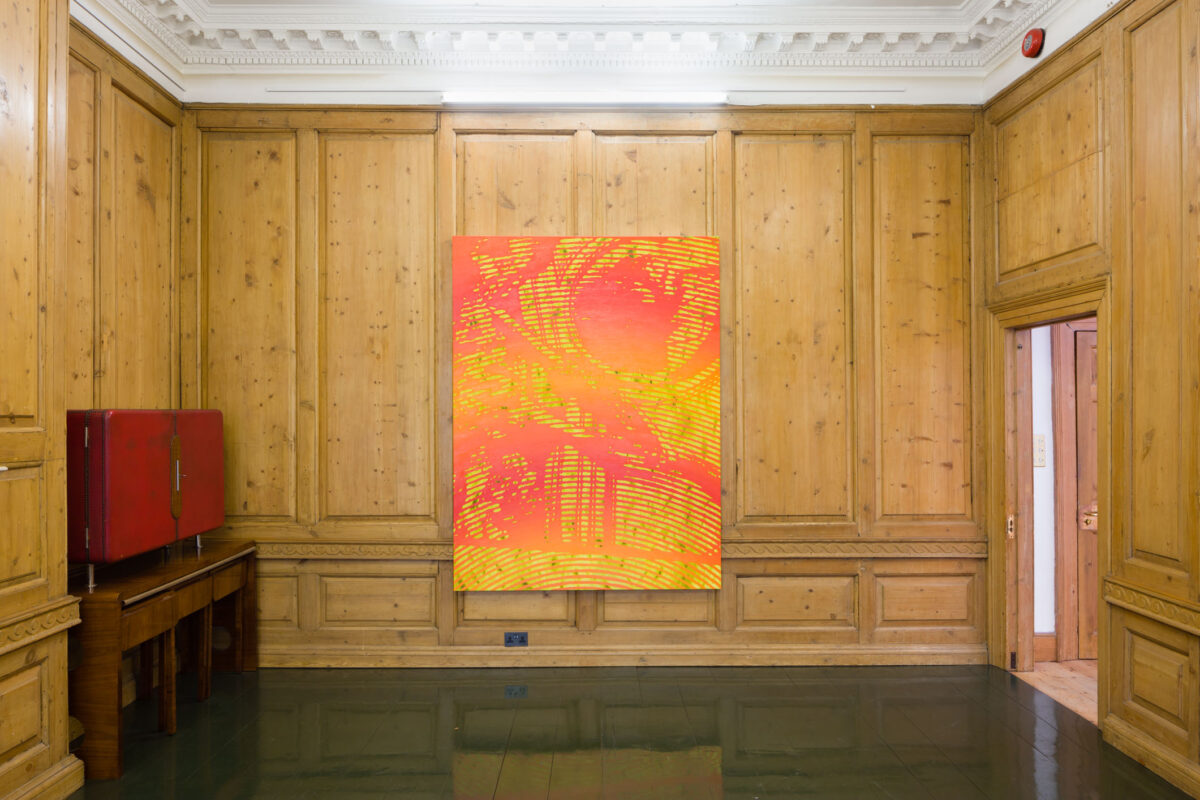 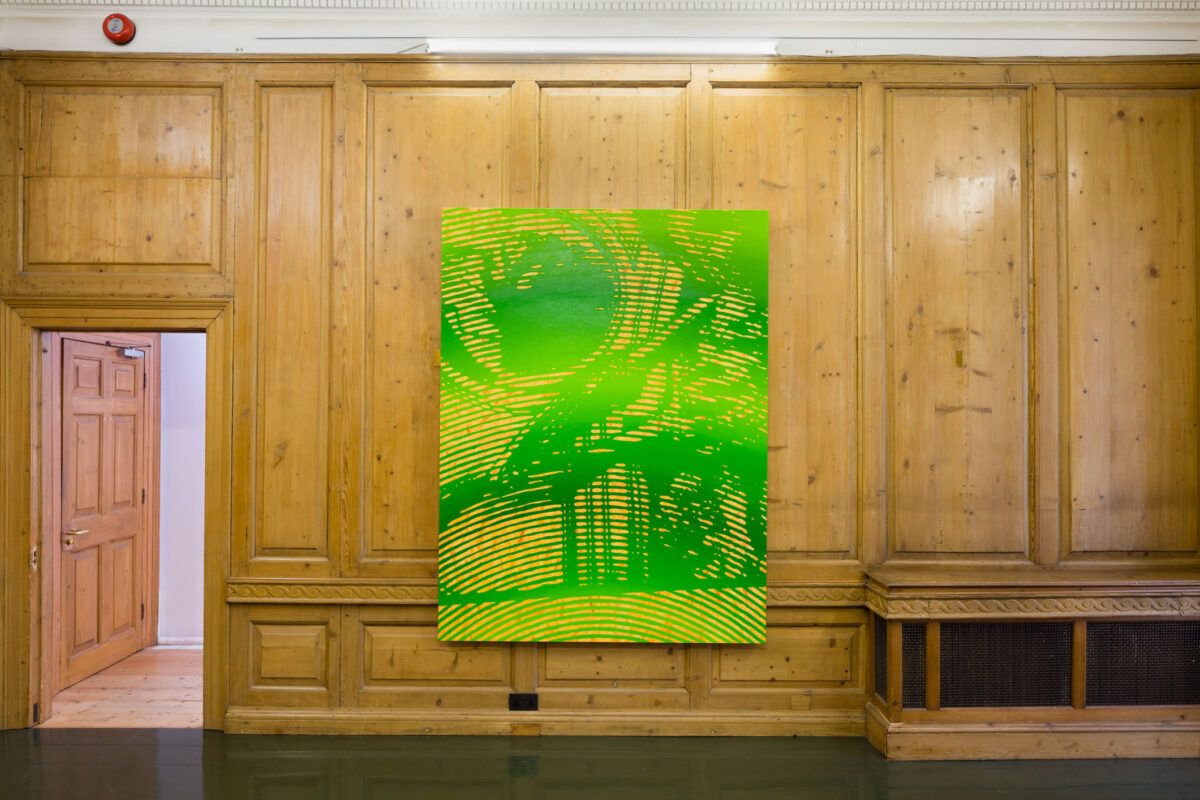 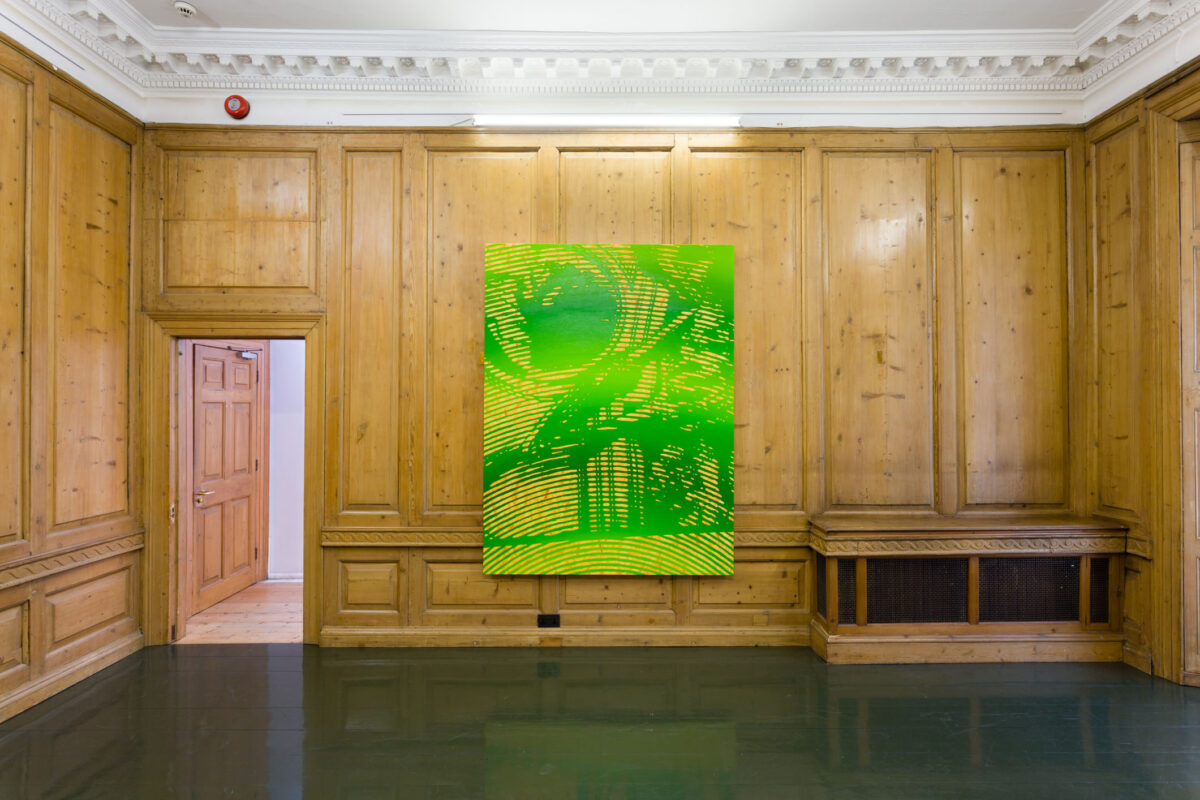 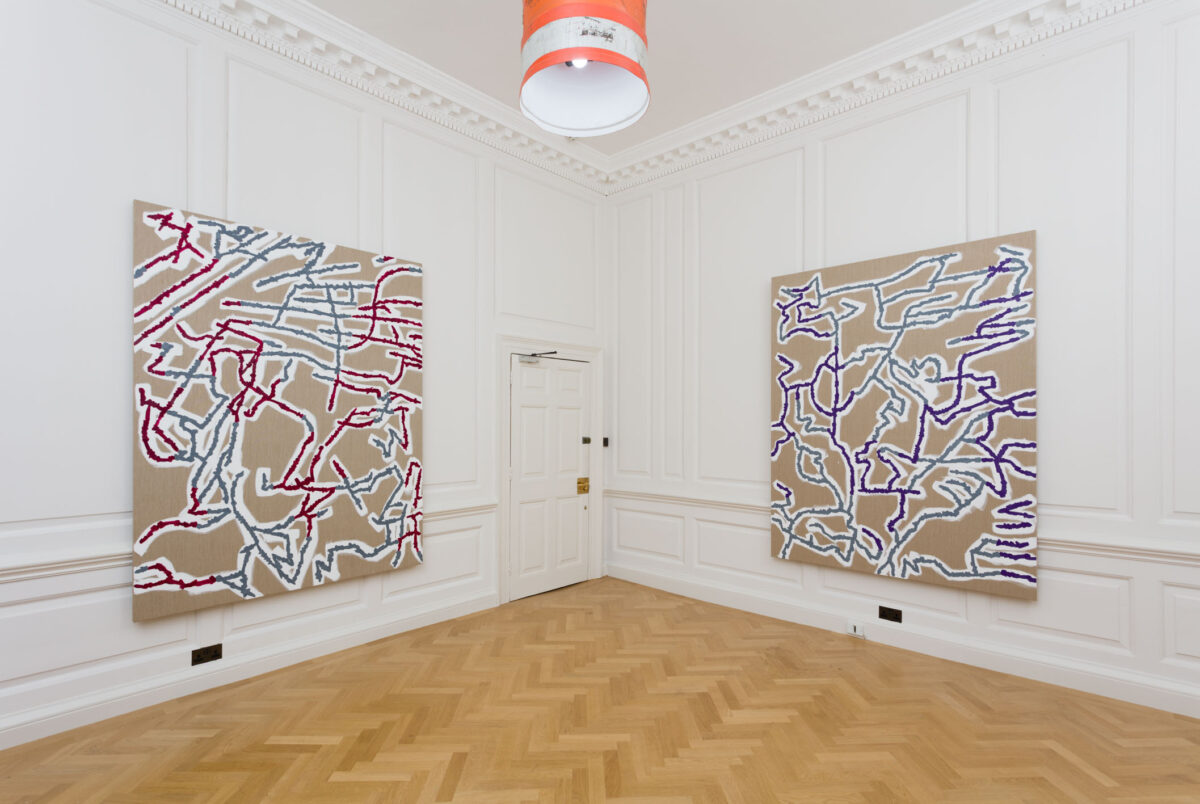 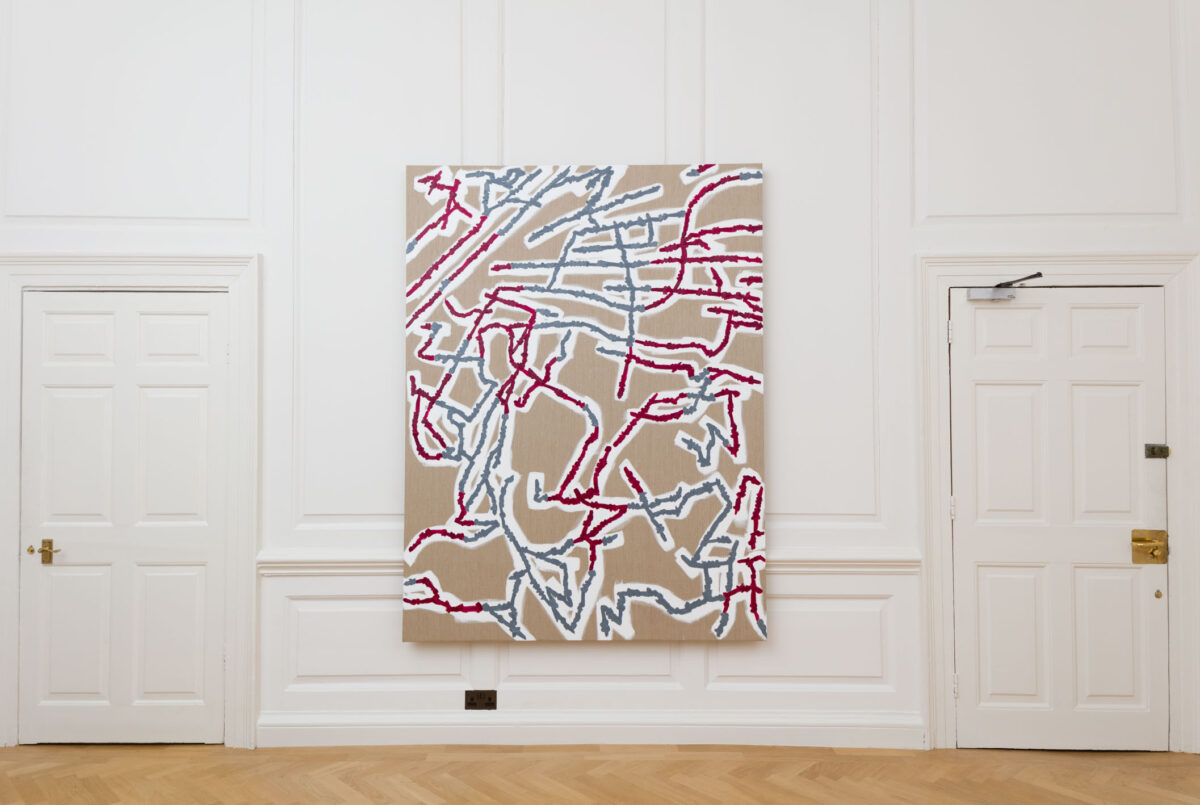 Robots are made of flesh:

There is no such thing as either man or nature now, only a process that produces the one within the other and couples the machines together. Producing­machines, desiring­machines everywhere, schizophrenic machines, all of species life: the self and the non­self, outside and inside, no longer have any meaning whatsoever.❄

The mysteries and labors of Matteo Callegari’s practice shed light on pivotal issues dominating images’ (and painting’s) relationship to the construction of reality. His work encapsulates a specific position, which I would like to define as “oscillatory.” Continuously moving between opposites, swinging between one thing and its contrary, Callegari’s works are icons of the current impossibility of defining anything through the notion of dichotomy. Rather than commonly­held binaries—human v. machine, analog v. digital, etc.—they supplant a grand, divine, or technological split with a hybridized pictorial practice.

In fact the difference between the primary meaning of “digital” and its etymology becomes the perfect example to trace the oscillatory action our eyes and minds need to perform in order to grasp the secrets behind Callegari’s oeuvres. While the most credited meaning is “whatever involves computer technology” its etymology is quite oppositional. Coming from the Latin word “digitus,”whichmeans“finger,”❅ it has been traced to 1400­ 1450 ACE—aturning point in the history of art and specifically the history of painting❆. In other words, the primary term to define machines, alter­humans, and robots, is in fact the most symbolic of human limbs. From Michelangelo’s Sistine Chapel to Steven Spielberg’s ​E.T.​, the finger represents the dichotomies between divine v. human, as well as human v. alien. The digit is the instrument of creation that touches something god­like and the symbolic threshold of rupture and division.

The works at Carl Kostyál reflect Callegari’s move away from such dichotomies. In particular, we analyze ​Traverse​(2016). In this work the artist created several “actions” and applied three related “layers”—two keywords to be investigated later—to the canvas. “First there is a layer of oil paint, very saturated Magenta. Once that is dry, layers of black and white oil paint are applied, and then more grey, black, and white, using directly the fingers on the canvas; paint is applied until there is an allover field of gestural cross hatchedmarks,developingachiaroscuro❇ effect;afterthefieldiscompleted, a digital drawing (made in Photoshop) is projected onto it, and the fresh oil paint gets removed from the surface where the drawing is, revealing the magenta underneath.”❈

Adobe Photoshop was created in 1988 by Thomas and John Knoll. The program uses various layers to build images: specific aspects of the picture are divided into layers, and the user can apply filters, tools, and actions to each component of the image. Everything is within his exacting control. This software not only revolutionized the graphic design industry, it also became part of reality at large: images are infinitely reproducible, divisible, fractured, and plastic. While Callegari’s unconventional hangings—floating in space or hung between doors and thresholds—may reflect the ways in which the images behave as a combination social and economic currency; the paintings themselves oscillate between the pictorial and abstract via forms of digital imaging systems.

Looking at this parallel, and historic uses of images, we can find a relevant example in art historian Roberto Longhi’s (1890­1970) orthodox refusal to show color photographs during lectures, opting for the more reductive and less illusionistic use of black and white slides❃. And on the other hand, images of paintings which appear on iPads, through which we can see the same ideological flattening and distortions via the literal emphasis on smart surfaces. Against this backdrop, Callegari conceives his paintings through the frought dichotomy between the tools of graphic design and the physical painting. His painterly language is the product of both modes of communication, which allows it to oscillate seamlessly between both the digital and analog realms.

Through this action, Callegari positions himself within a particular conversation around the influences of technology on picture making❉. At the same time, what makes his position so special and unique is the trajectory through which it has been reached. Rather than outsourcing, or letting the canvas simply have an affair with the machine⭑ , Callegari makes hermaphroditic paintings, simultaneously deciding to take the double position of “humanized machine” or a “mechanical man.” In other words, his hand (or finger) enacts the machine, insourcing the digital in accordance with the dizzying oscillations of Photoshop’s infinite layerings, and the complexities of the will of the user.

❆ LeonBattistaAlberti’sDePicturawaspublishedin1435,becomingonethemostimportant treatise of the Renaissance.

❃ OneoftheleadersofthisorthodoxywasthearthistorianRobertoLonghi(1890–1970), whose art history lectures, supported by high­contrast black­and­white slides, became famous due to the connection to Pier Paolo Pasolini, who several times mentioned the influence of Longhi’s teaching method—which he experience while studying art history with him in Bologna—on his approach to moving making.

⭑ Modernismshistoricinterestinmachines:Futurism’sloveformachinesaswellasDada­like Comte de Lautréamont’s motto “As beautiful as the chance encounter of a sewing machine and an umbrella on an operating table.”