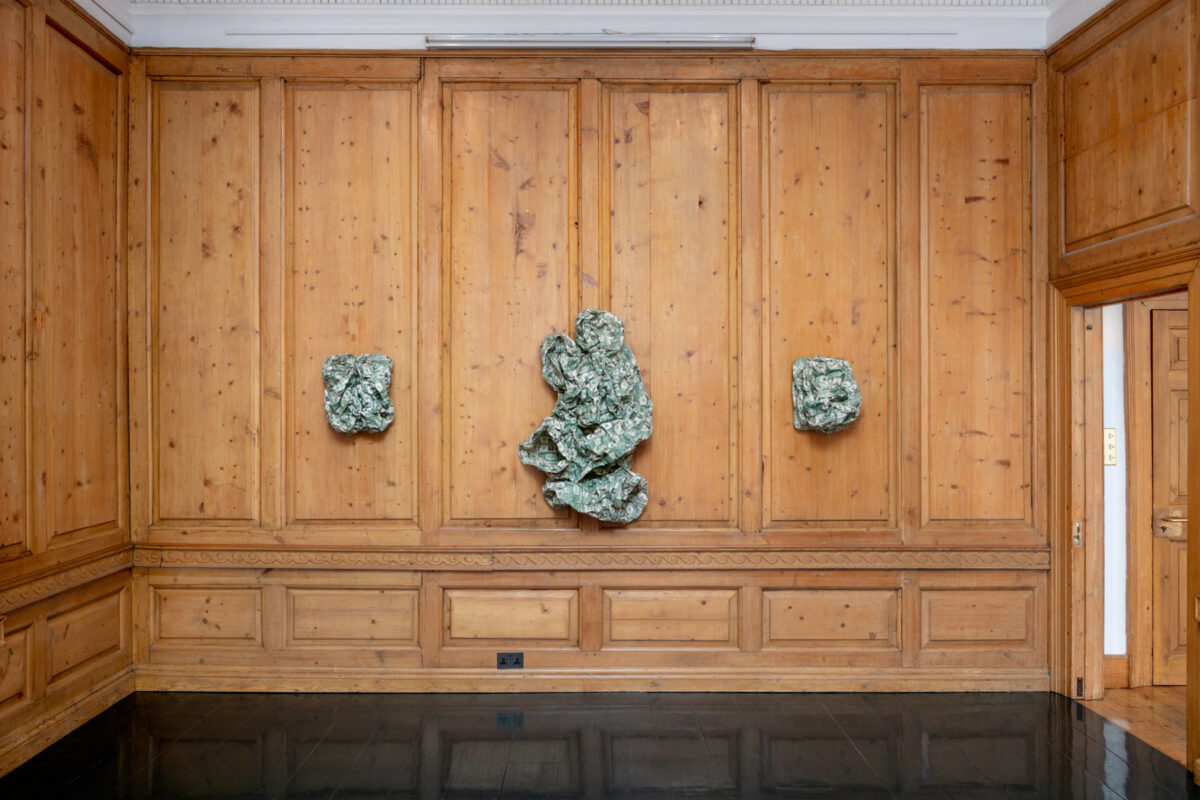 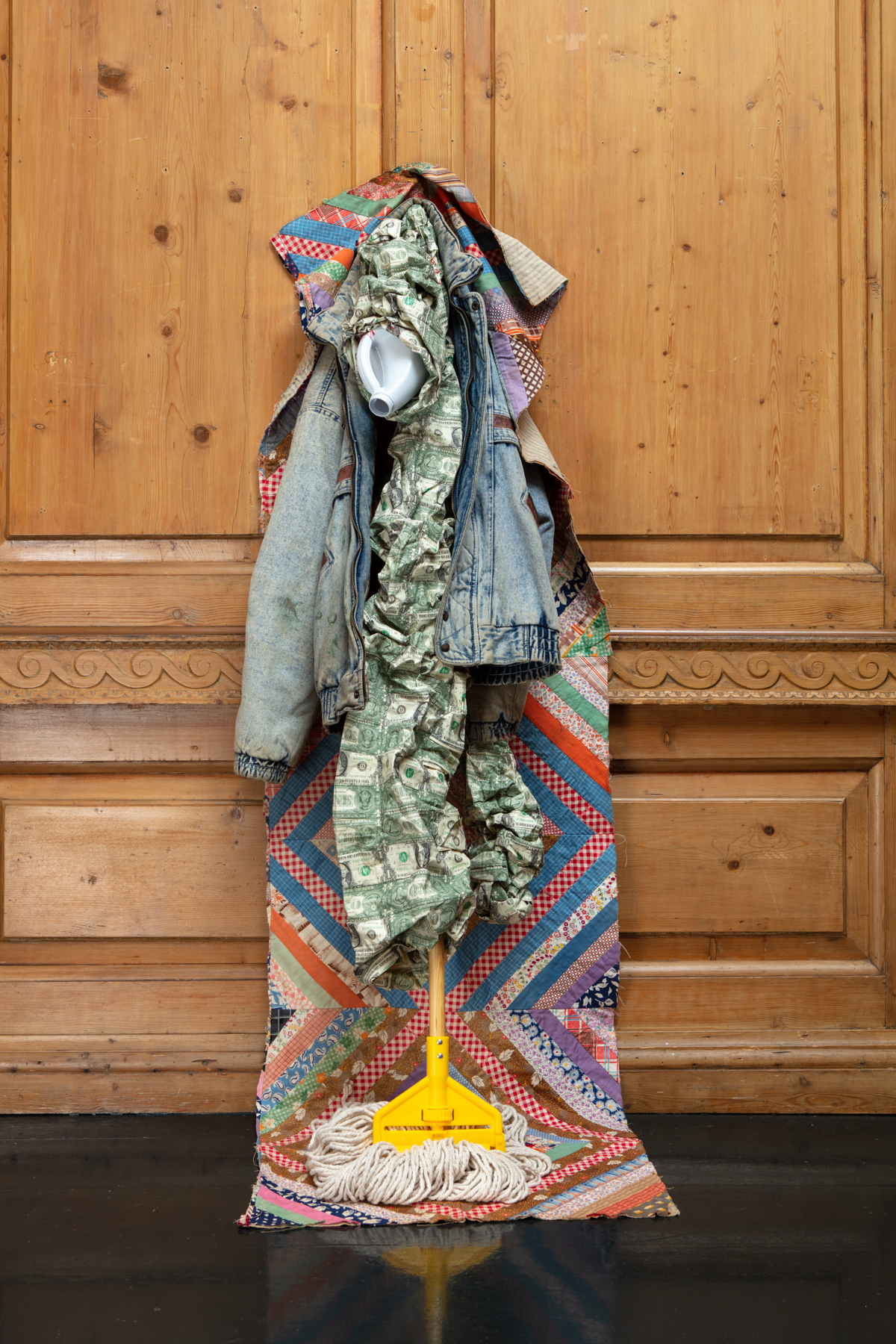 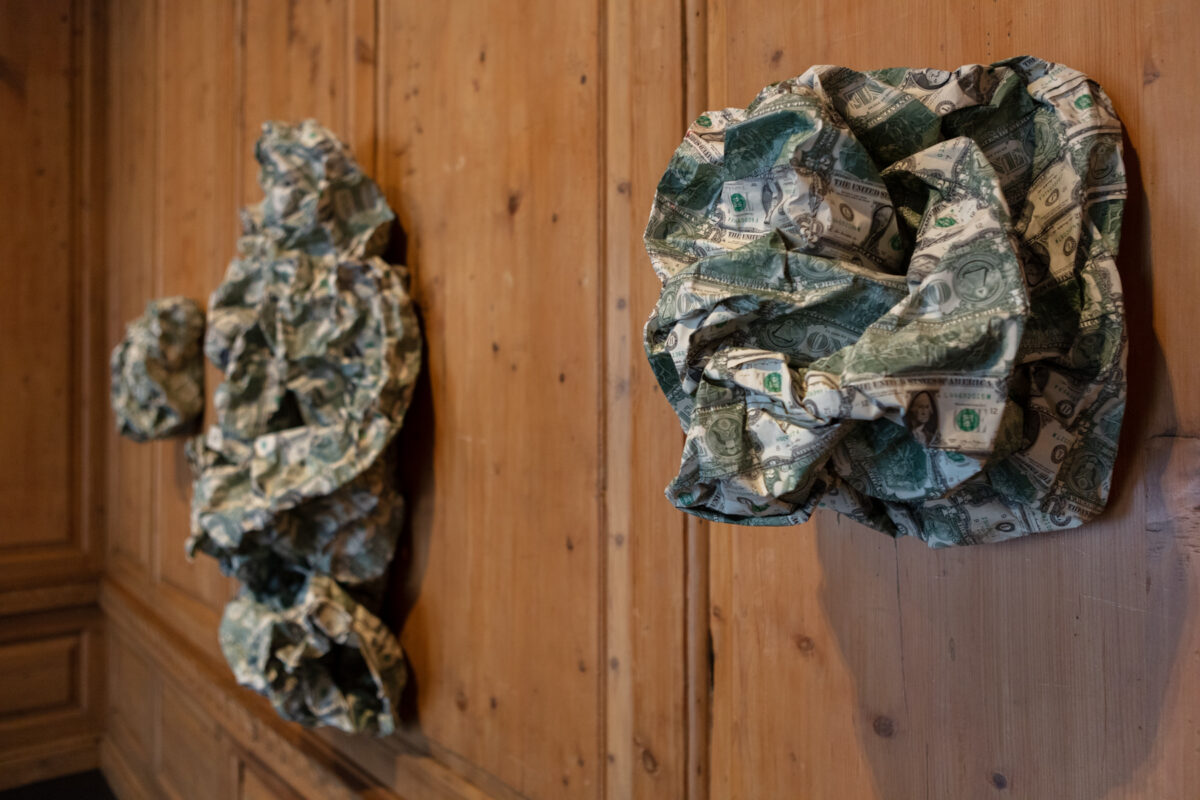 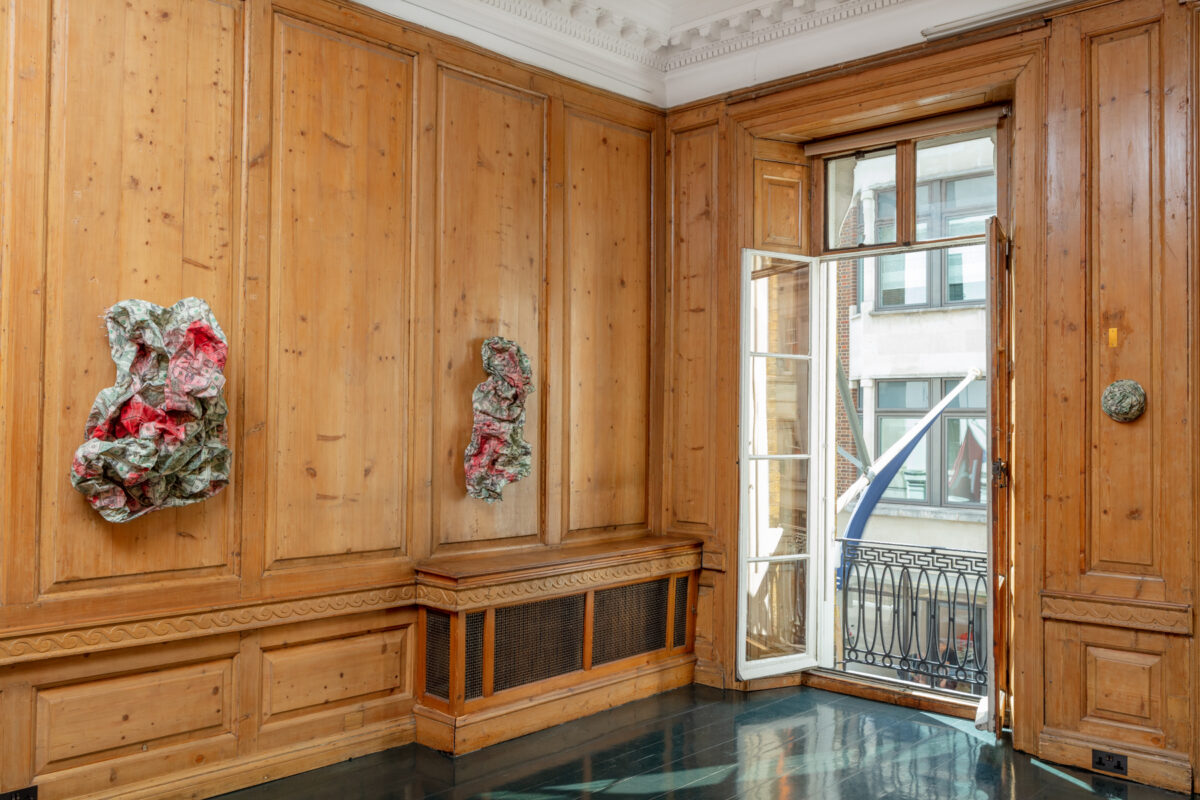 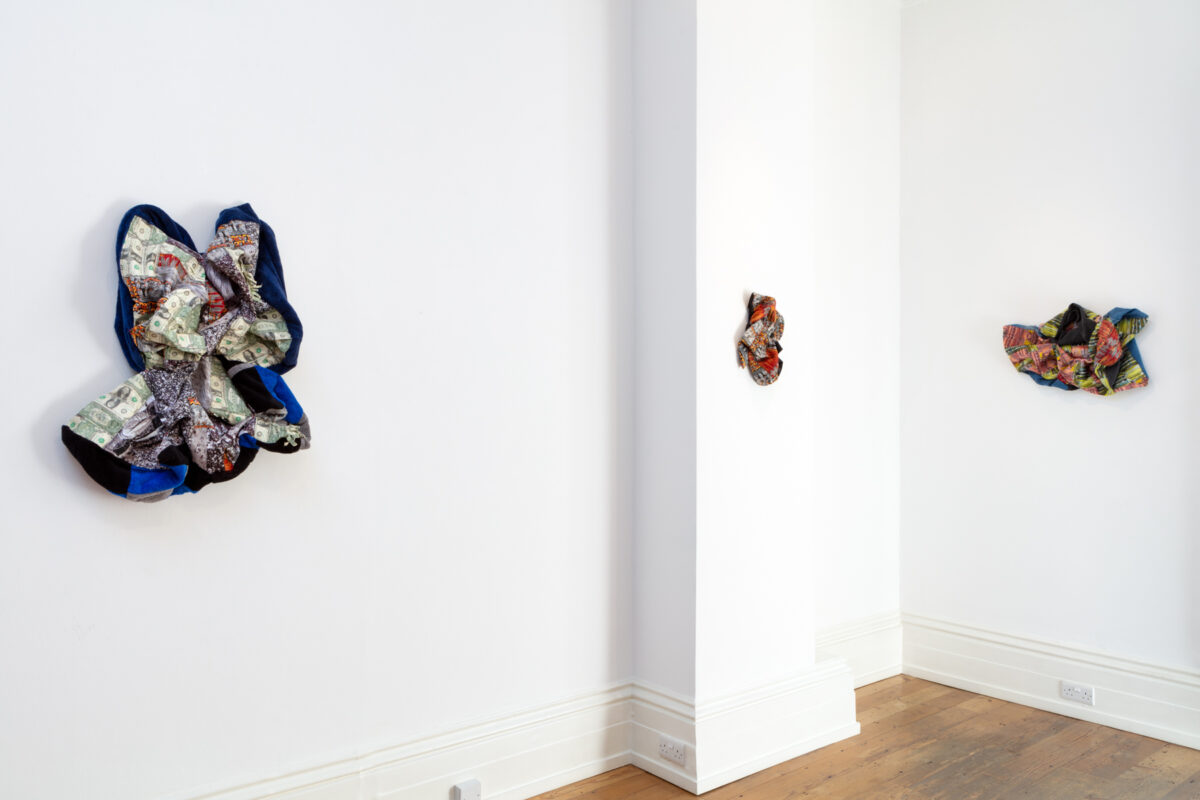 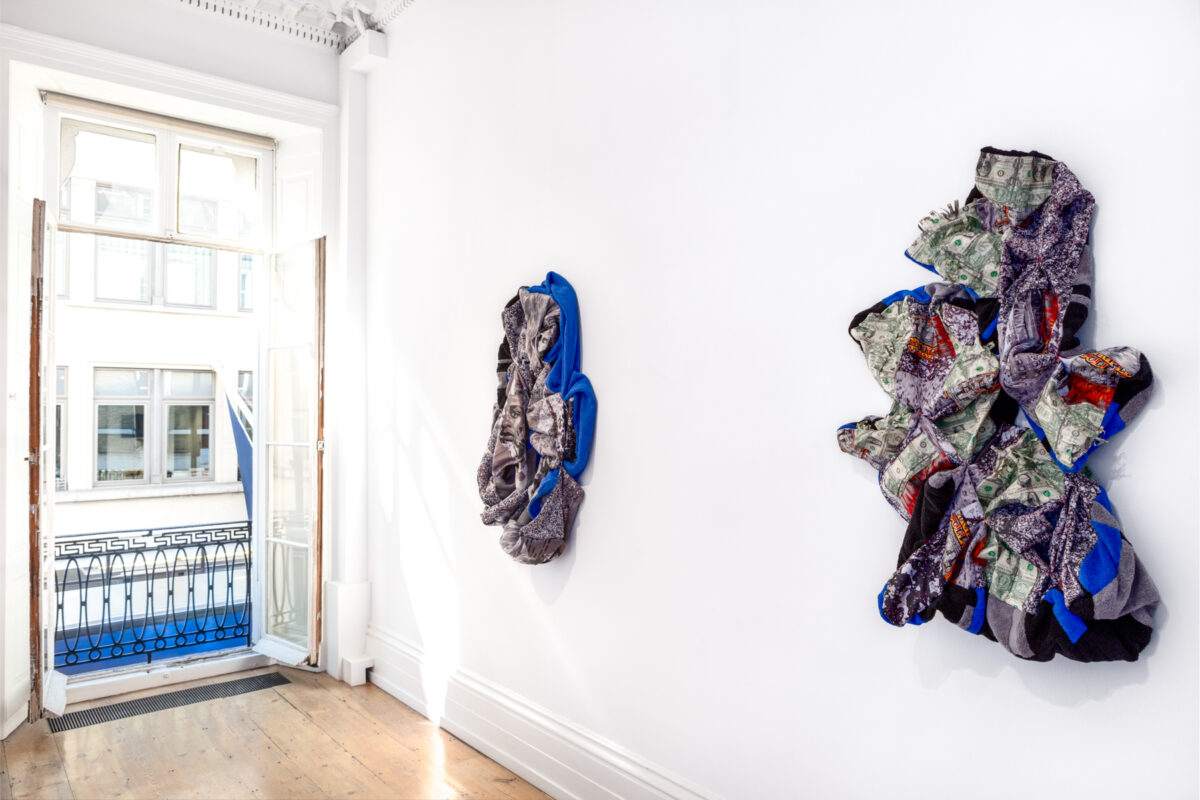 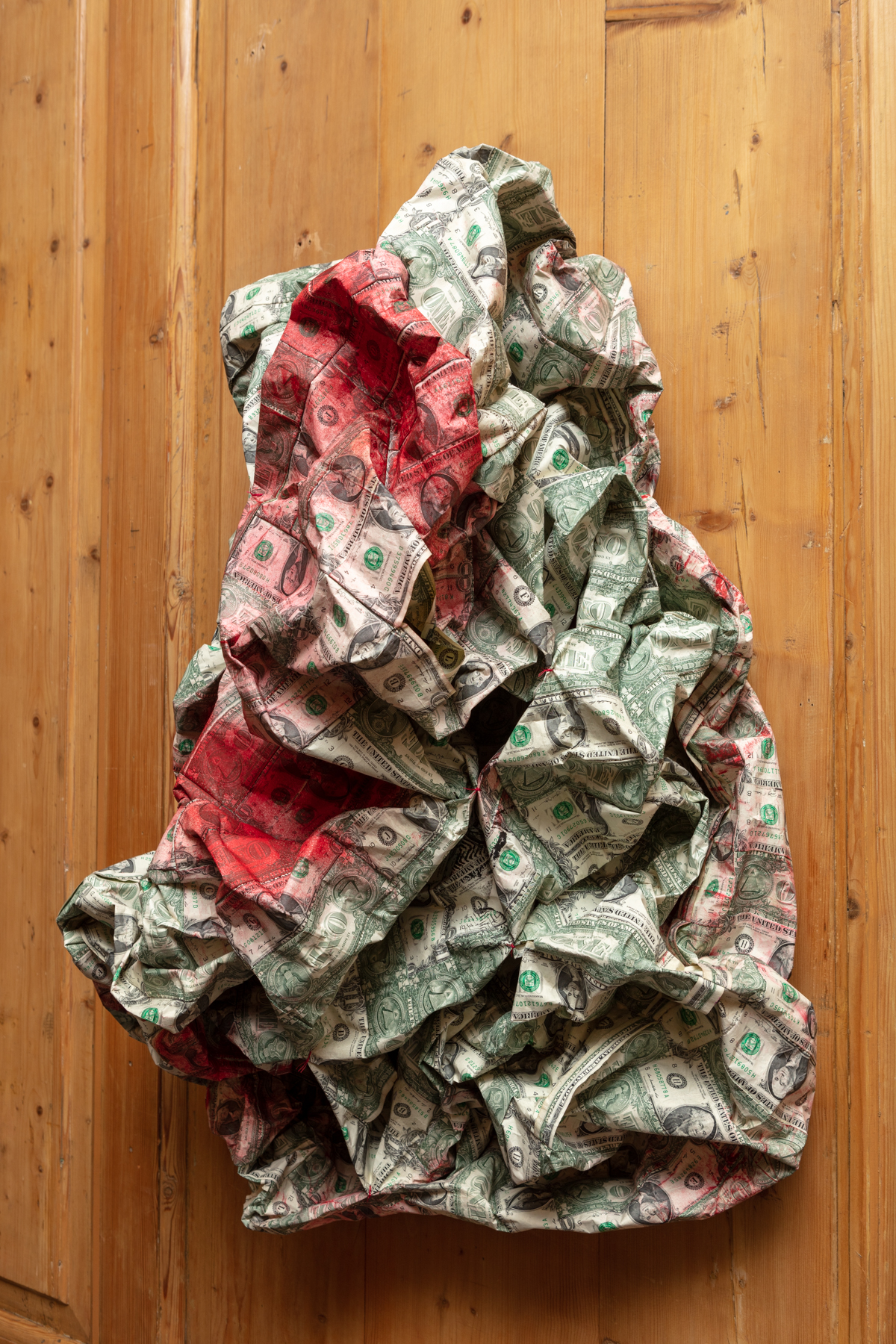 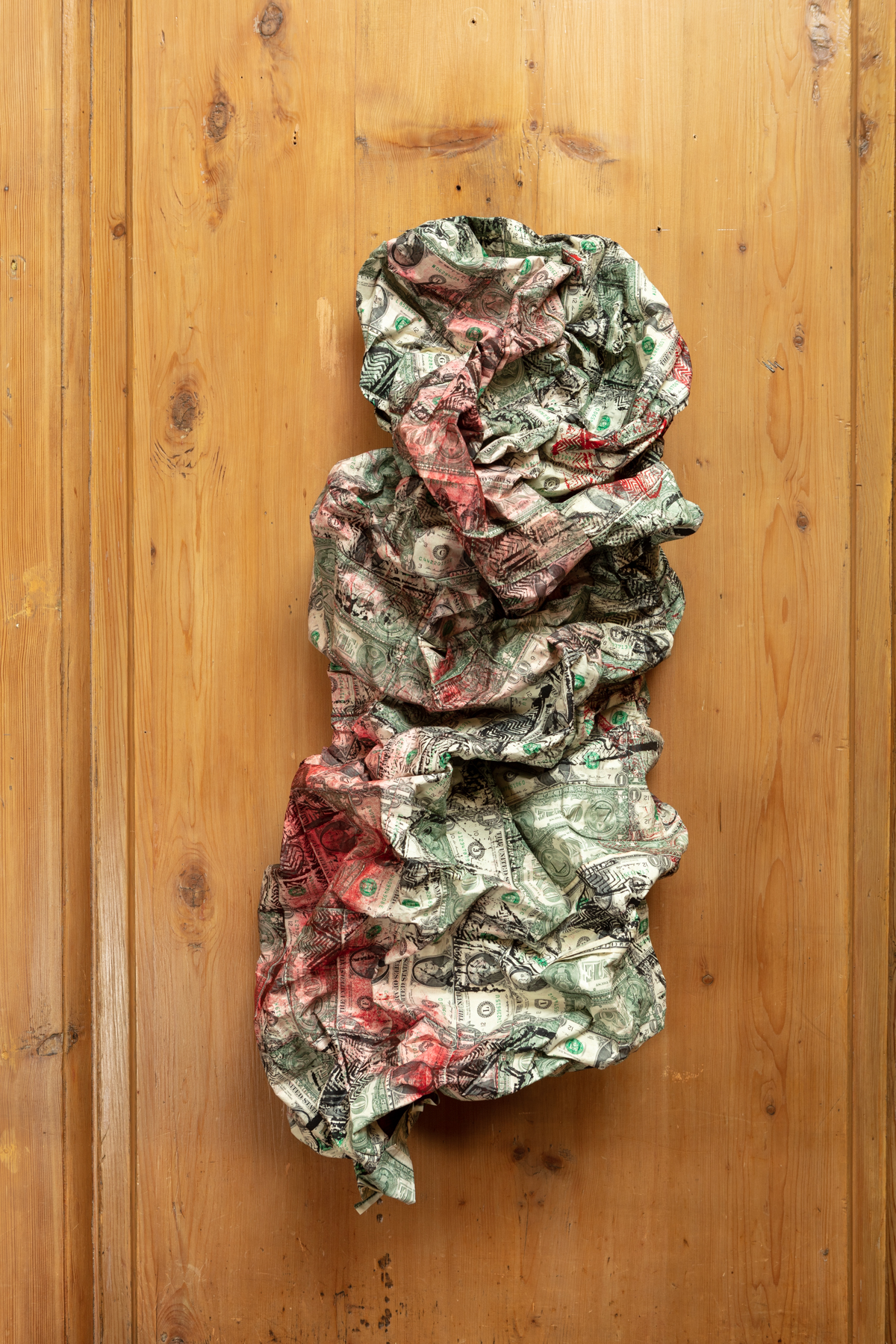 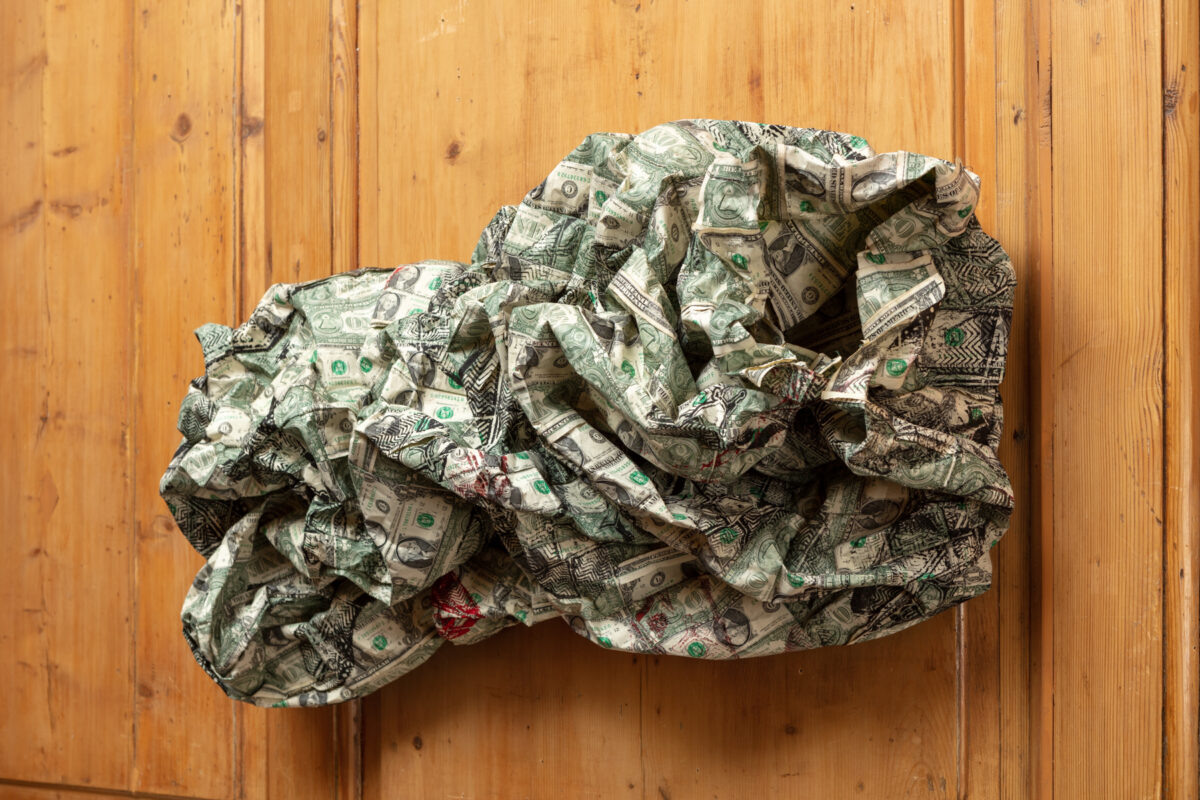 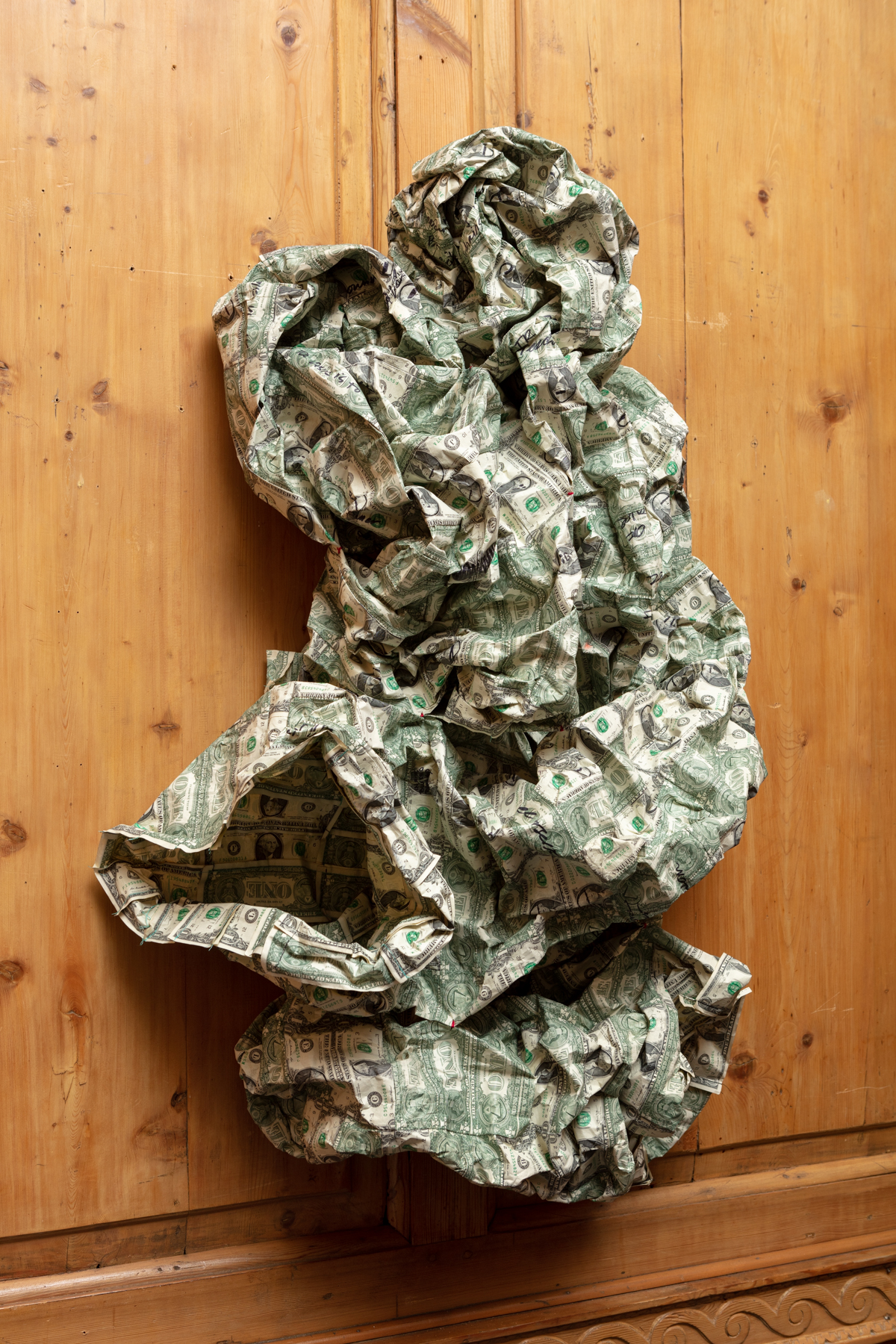 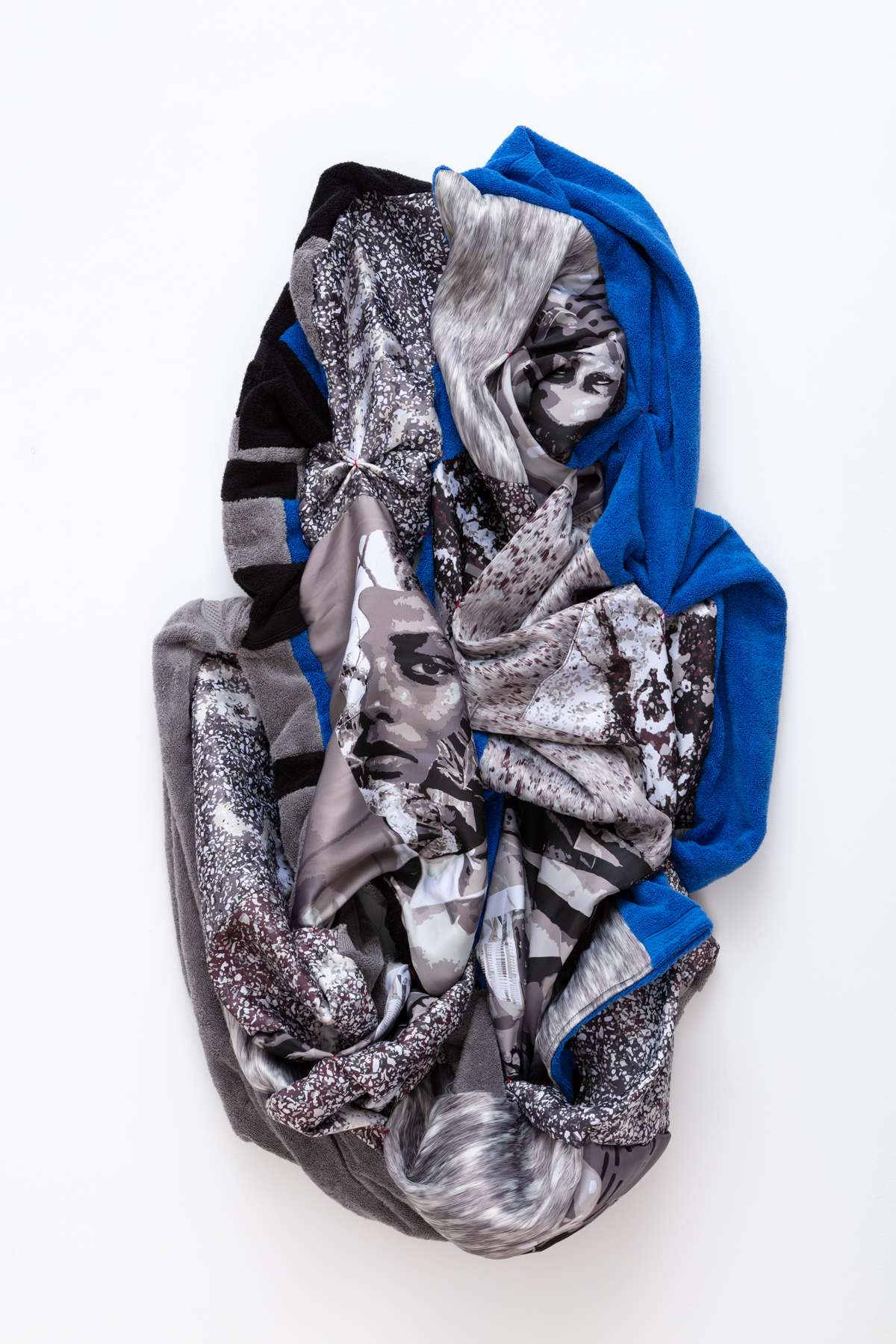 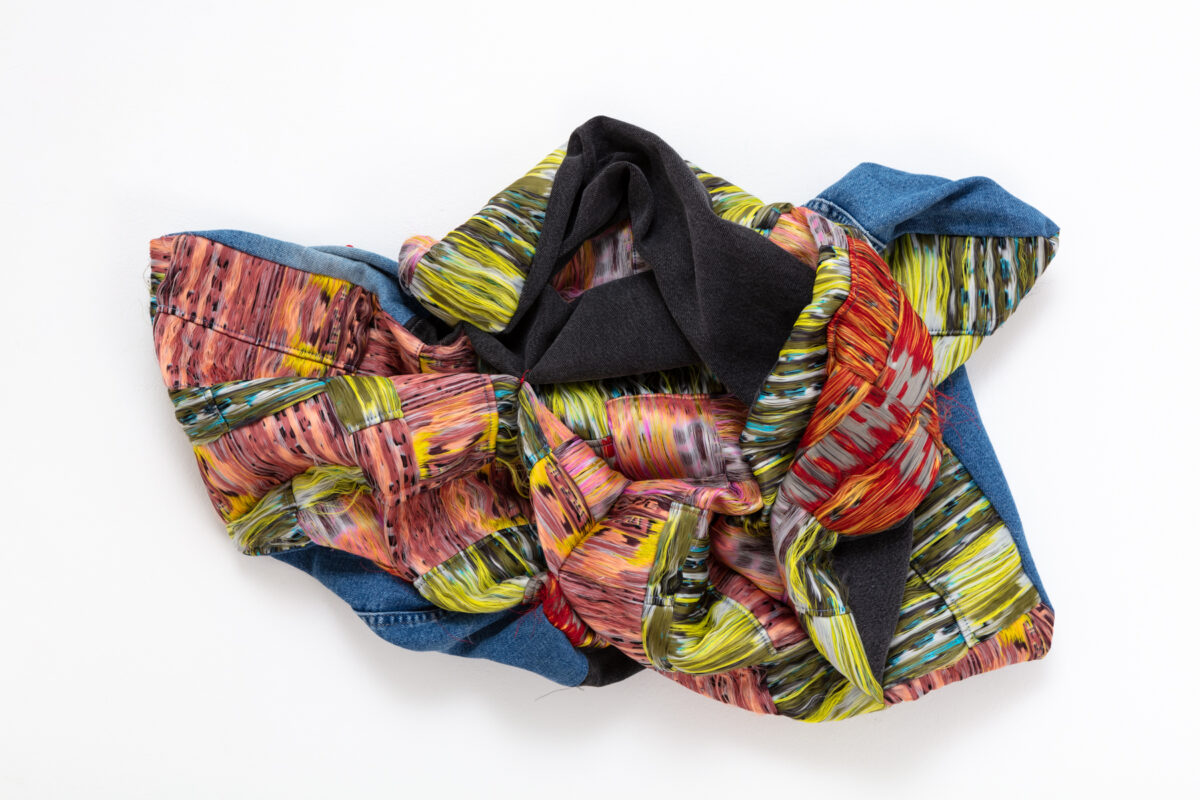 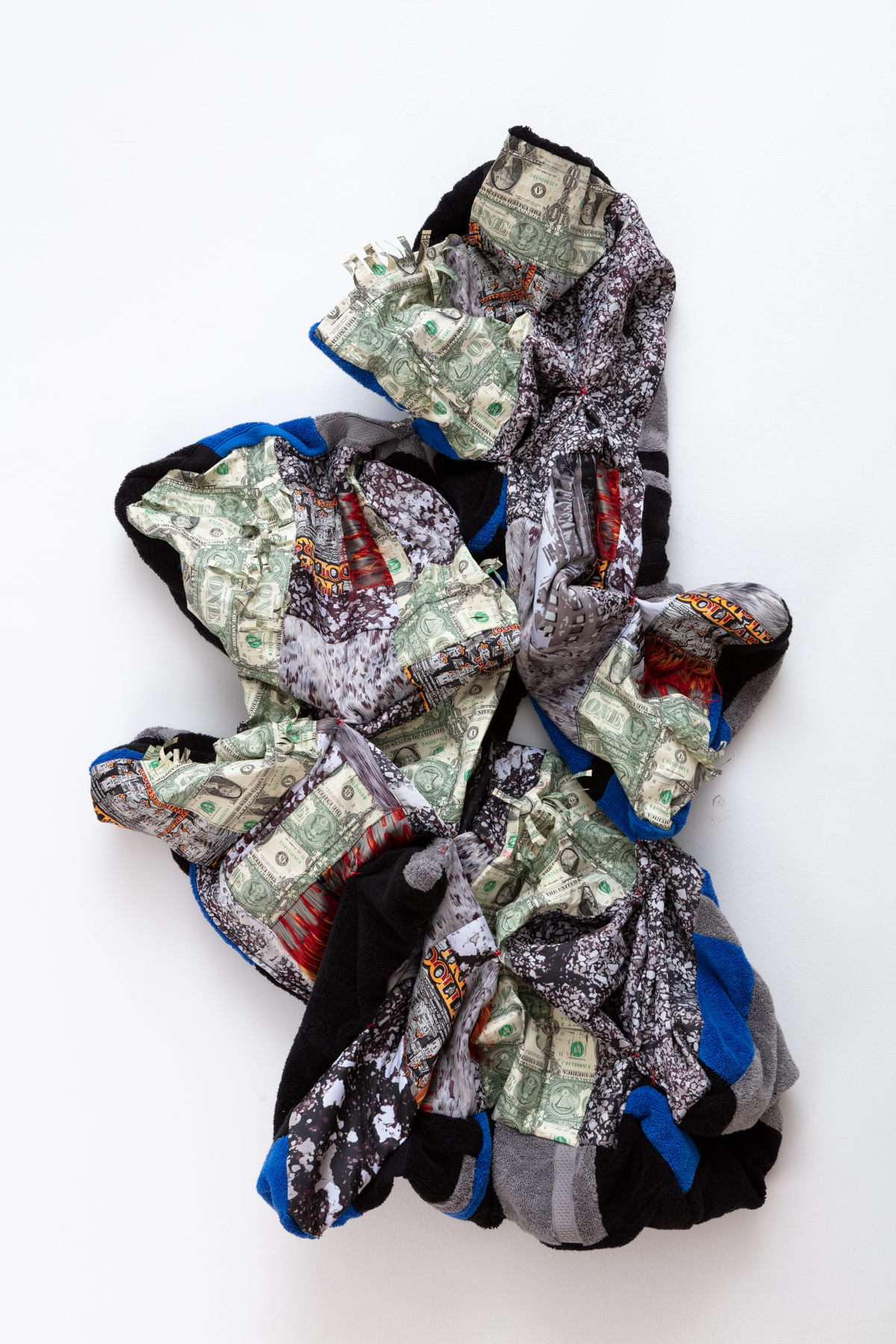 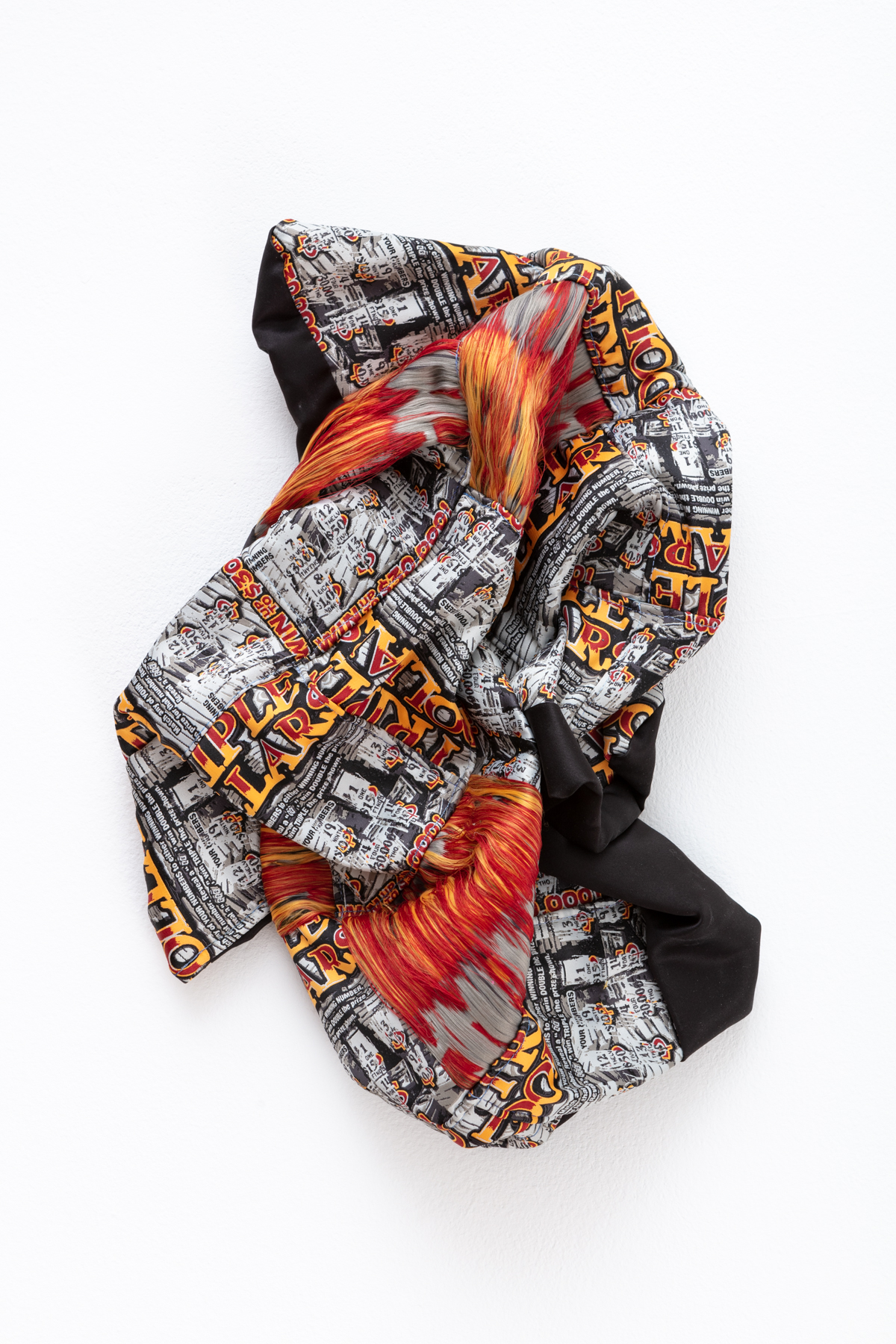 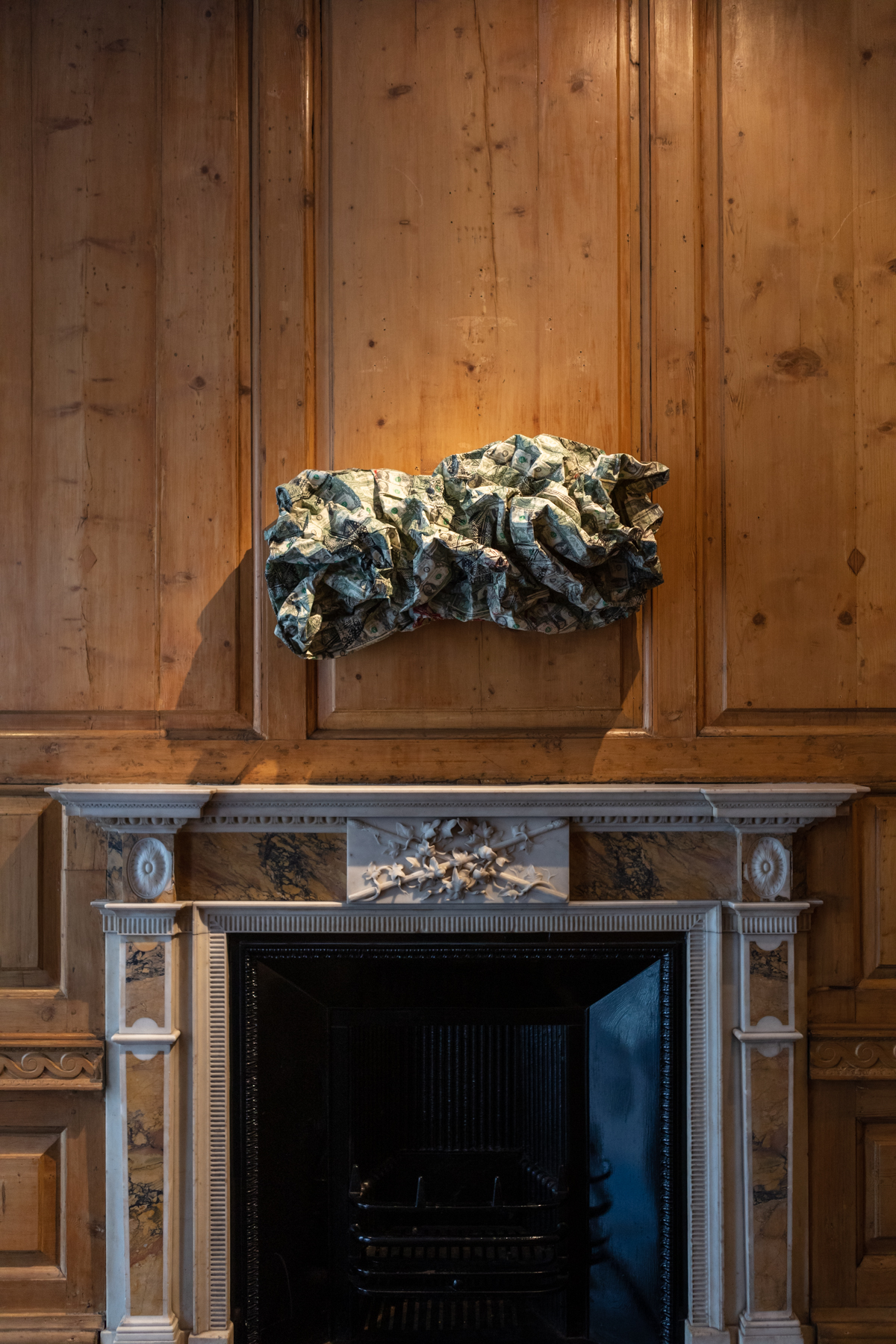 Standing naked, his living room carpeted in sheets of sutured dollar bills, Basil Kincaid’s paint-covered chest heaved and he wiped his brow with the back of his hand. A red streak cut across his brown forehead, got caught in a curl. “I’ve been thinking deeply about the historical impact of money, and the pursuit of it, on the black body. I’ve been thinking about how we house this emotional, economic, trauma in our flesh.” He’d just stamped his silhouette across the still-flat quilts, curled in fetal positions; the residual texture of the dollars creased into the acrylic left on his skin. “It’s gonna feel so good to slice these blood-soaked dollars up and bend them to my will.”

The process of making Get it How You Live required destroying Kincaid’s assets – the first money quilt took half the dollars in his bank account; he cut them up like cloth, rendering them useless as tender. But, he said, it was worth the catharsis he found in seizing control over what had been controlling him. “’…chasing money can detach you from some of the people closest to you. I’m thinking about how money leaves that mark. That scar. Now I’m marking back.”

These quilts represent a process of unlearning a deep, American, reverence for money; of attempting to heal the intergenerational trauma of capitalism that would have us believe that we are only as valuable as the cash we can stack. The visceral act of destroying dollars to create something of greater (symbolic and actual) worth is Kincaid’s form of alchemy. It’s an access point to the lineage of alchemists from whom he comes. The irony, perhaps, is that as he unweaves toxic attachment to money over everything from his heart he grows spiritually closer to the ancestors who survived and seeded him.

“I keep thinking about how quilting began, in the American context, as a practice of necessity, as winter wasn’t giving us quilts,” he said about the title piece for this show. For Kincaid’s ancestors, quilting was a practice of necessity, of taking small scrap fabrics and transforming them, with great care, into larger objects that gave warmth — and also, in the tradition of alchemy that is Black resilience, were symbols of family and storytelling. Each piece of fabric was a part of the narrative, each stitch an act of love. The warmth of an elder’s quilt extended beyond physical comfort; to be wrapped in her craft was to feel her love long after her warm-hearted being passed from this earth.

“The only necessity my quilts are born of is the need to connect with the ancestral energy, my foremothers, my lineage of creative tradition and genius.” The quilts of Kincaid’s ancestors were also tools of resistance — in a practical and spiritual sense. Physically hung on homes of the underground railroad, they signaled pathways to safety amidst terror. What looked like blankets to slave catchers were quiet flags of rebellion, covert signs of hope that relied on the oppressor’s disbelief in their brilliance.

Spiritually, they were gifts of inheritance. Passed down from generation to generation, family quilts are soft memory. They are reminders of Black mothers’ enduring will to believe in a future for their children. Like the sharecropper’s fruit grown on forcibly leased land, quilts are symbols of the persistent and creative longevity of American Blackness. Against unimaginable repression, these alchemists never stopped planting seeds or stitching together scraps into gorgeous gifts for their children. And their children’s children.

“But the money quilt doesn’t keep you warm,” Kincaid reminds us. Cold, and crinkly, dollars as objects are all but useless to the human body. Stitched together, their spectacle is the disbelief of seeing them as a medium. What dissonance! To witness these precious bills we spend so much of our lives striving for cut up, painted, shaped into forms – instead of stacked, intact, to be counted. And they are forms that evoke shame, bunched up like discarded notebook paper, or that mimic humans but stand (or hang) lifeless on display.

Where there are sensual curves in Kincaid’s cloth quilts, there are harsh edges and stark shadows in his money pieces. They are flags of resistance in a different way, spiritual salve born not from the warmth of a grandmother’s love – but the process of unclenching capitalism’s grip on the body.

Kincaid chooses fabrics that reference the vapid striving of the American Dream – like silk renderings of his father’s lotto tickets. They gesture at the dark side of Black American inheritance & hustle, and yet maintain a sense of the warmth of Black family. (Except “Corner of Alaska And Walsh Under Dist. 1 Surveilance,” whose cool monochrome face and woven concrete or cosmos or muscle fiber, or your dad’s favorite sweatpants, are gripped in headlock by Blue Lives Matter blue; it reads like Whiteness sucking the saturation from a technicolor film.) They’re still soft to the touch.

In contrast, the money quilts – especially those with Kincaid’s bloody body prints – are starched mirrors to our own addictions to money, reminders of how physically and spiritually draining chasing it can be. Hung adjacent to the cloth quilts, especially as they’re combined in “Self Portrait: I Am Not My Labor,” the reconstructed dollars call into question how and why we invest so much belief in the dollars themselves.

When the dollars are mixed in patchwork with cloth, like the in “Retired Drug Dealer” and “Fuck You Pay Me,” the money adds a dark motion in the pieces – it’s hard to say if it’s bursting out or slicing into the forms. Or if the forms are digesting the money, churning it as fuel, trying to scrub it clean. Grappling with a necessary evil, hoping its a temporary hustle. “Our ancestors picked the cotton that this money is printed on.” Kincaid engages with one cyclical American evil: this country was built on the backs of Black people, and continues to feed on their vibrance through systems that require they participate in their own destruction.

Treating dollars as his foremothers treated scrap cloth, like raw material to be transformed, with great care, into a precious object of greater material and spiritual worth, Kincaid offers us evidence of a process we’d all do well to engage in: releasing the deeply internalized belief that money itself is precious and that the more of it you have, the more precious you are. And even deeper, healing from the poisonous belief that our ancestors weren’t precious because they were cash poor. It’s these beliefs – especially when they’re held a bout us – that justify all the ways we’re overworked and undervalued, squeezed for every dollar by landowners, by bosses, by police. Strangled to death for attempting to control of our own assets. Manipulated to believe we deserved it.

Kincaid refuses these ideas, and calls on his ancestors and his elders and the bloody debris of his own body as source. With Get it How You Live, he says no. “These cycles end with me.”