In Jess Valice’s (b. 1996, San Fernando Valley, CA) recent paintings, it’s usually the eyes you notice first. Huge, heavy-lidded pools, resolute and weary, as if their owner had lately gone through something but was nevertheless holding on, engaging the world. But then, by contrast, there’s the ears: oversized, sometimes mismatched in colour and on occasion reddish, the artist deliberately clowning herself or her subjects. The who’s-who distinction is ambiguous; Valice’s portraits can look like near-dysmorphic caricatures of her own features, but even in double portraits, everyone she paints looks somewhat like her. Her cast of comic melancholics, then, at once shares a range of emotions—a generalised sadness, exhaustion, stoicism—while being aware that expressing uncut melancholy (and fixating on the self, even in a confessional age) can itself be a quick turnoff for others. And that, conversely, humour, self-deprecation and absurdism are ways to keep a viewer with you, as they find out that the work is relatable not just to its maker but to themselves.

For Valice, whose art is predicated on reaching out, certainly isn’t suggesting that her heaviest feelings are exclusive to her. Nobody gets through this life unscathed, and everyone must find ways of living through their personal cyclones—plus, lately, their unasked-for participation in collective disasters like pandemics—from moment to moment. Here’s one of Valice’s characters, rosy-nosed, flat-lipped, crocheting a currently tiny green thing which contrasts with the bulbous hugeness of the knitter’s hands. There’s a sense of someone escaping into manual making, a break from routine, as an escape hatch from their thoughts that also offers the comfort of creating something. (Painting itself, a slow and physical medium, might be considered a parallel activity, albeit a higher one with, at least here, disproportionate results.) The edges of the canvas, too, are smartly instrumentalised, pressing in—as so often in Valice’s work—on the central figure, like the walls of a home you haven’t been able to leave for months. None of this is a joke, but at the same time, look again and the canvas flips: it’s been painted, seemingly, by someone able to get at least momentary distance on their own trials, who recognises that emotions are highly changeable and that we should use whatever makes us feel better, even if it’s self-ridicule.

Elsewhere in these paintings we have a sense of how it feels to be strung between past and present: an adult figure surrounded by childhood toys, for example, or an androgynous nude watching a tent—and thus, perhaps, safety, home—blow away across an arid landscape. As often, such works (and the one featuring play with thick glass blocks, relating to an architectural feature from Valice’s past) approach the viewer through a specificity of detail plus a teasing withholding. We can name what’s in this painting, but we can’t quite read the attitude of the sitter, whose interior life we project into, as if through distorting glass. When, meanwhile, Valice paints works that also function in part as in-jokes—such as when she depicts a meticulously tidy fellow artist in a studio whose messiness is more like Valice’s own – the work lightly assumes larger contours concerning our wants, envies, flaws.

Again, each of us is capable of assessing our own failings and wishing we were otherwise, though we might just choose to laugh at them, to pretend they’re someone else’s problem. Such a swirl of mixed emotions feels like a Valice signature: consider the blonde woman in her underwear, at once revealing and protecting herself, while a glassful of ambiguously milky liquid spills over on the right. Self-exposure while holding back, dropping hints but not being definite: these might be ways for a painter to inhabit their work with their truths but also leave generous room for a viewer to move around, see their own vulnerabilities reflected, think through their survival strategies.

As a way of framing all this, Valice’s playfully skilful canvases are also speckled with references to art history, both deep and relatively recent: any relatively astute viewer will be able to spot these. That said, she uses such allusions purposefully, contrapuntally, unpredictably. See, for example, the painting here that stands as a restaging of baroque self-portraiture, yet in which Valice’s figure, posing with oblivious high solemnity, is surrounded not by elegant objects or by memento mori devices but by literal, if cartoonish, trash: fish skeletons, a plastic bin bag, bottles and cans, fruit peels. Here is seemingly another comment on a natural gravitation to messiness, but the painting also—one might conjecture—suggests that life’s garbage is inescapable and the struggle to rise above it necessary. (But, still, it’s inescapable.) Meanwhile, canvas to canvas, the paintings accumulate weight, also wit, through a degree of strategic repetition. You turn on your heel in the gallery and here they are again, those oversized eyes, asking for connection. You, the viewer, might not know Jess Valice, she might not see her audience (so much of art is a transaction in the dark), but a mechanism is in place within her paintings by which she feels seen, and so do you. It’s as serious as your life, and then for a moment it’s not—breathe out. And then, like your life, it’s serious again. 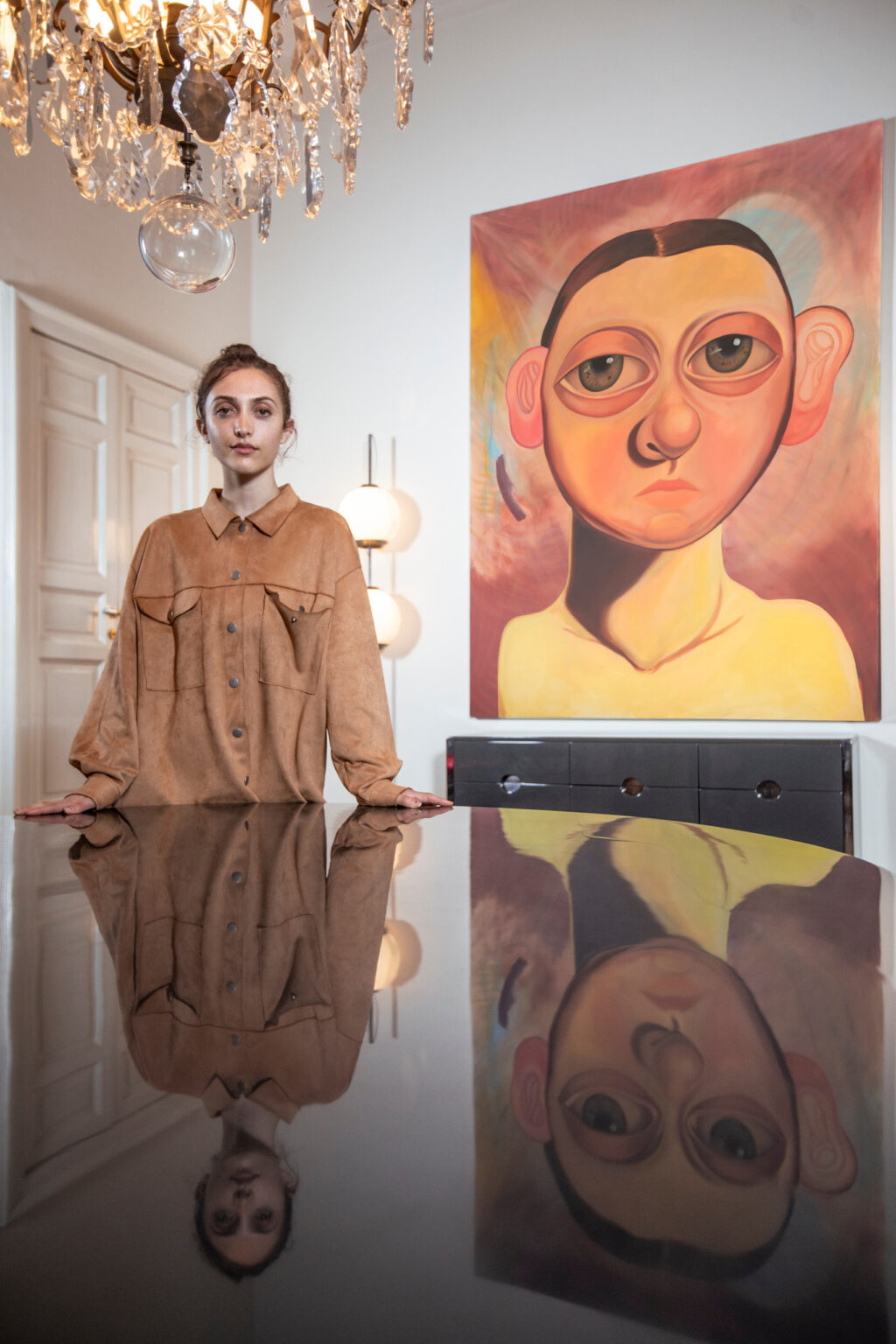