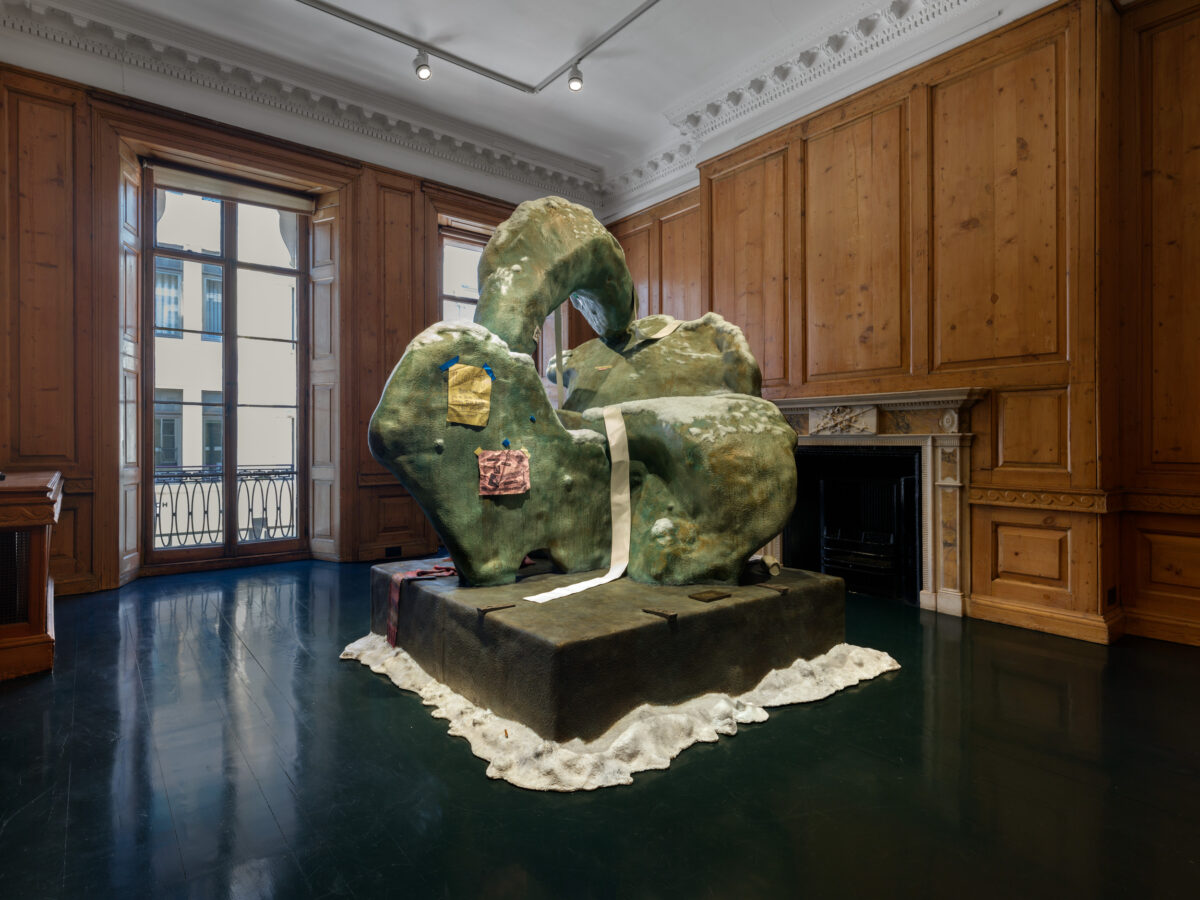 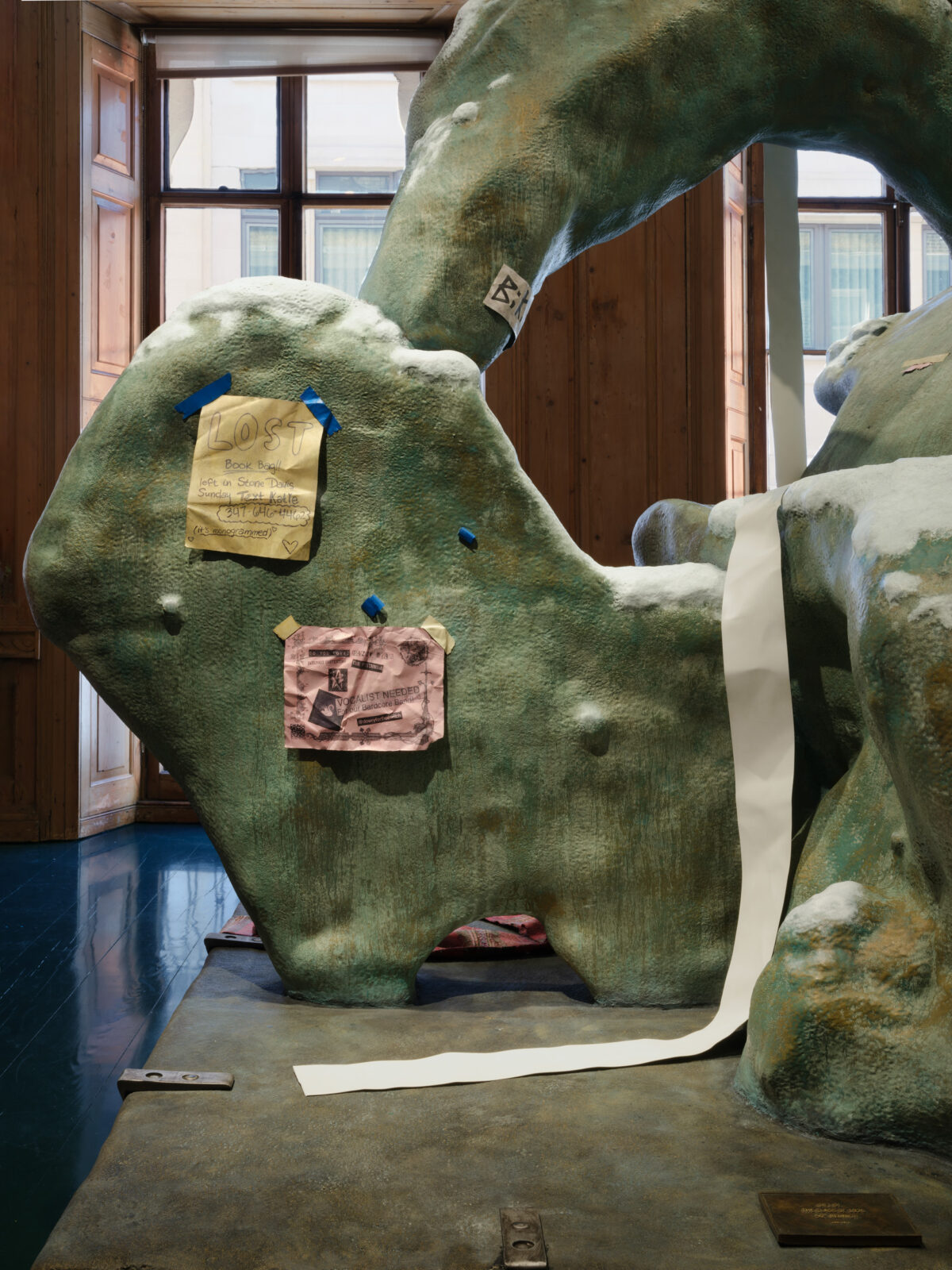 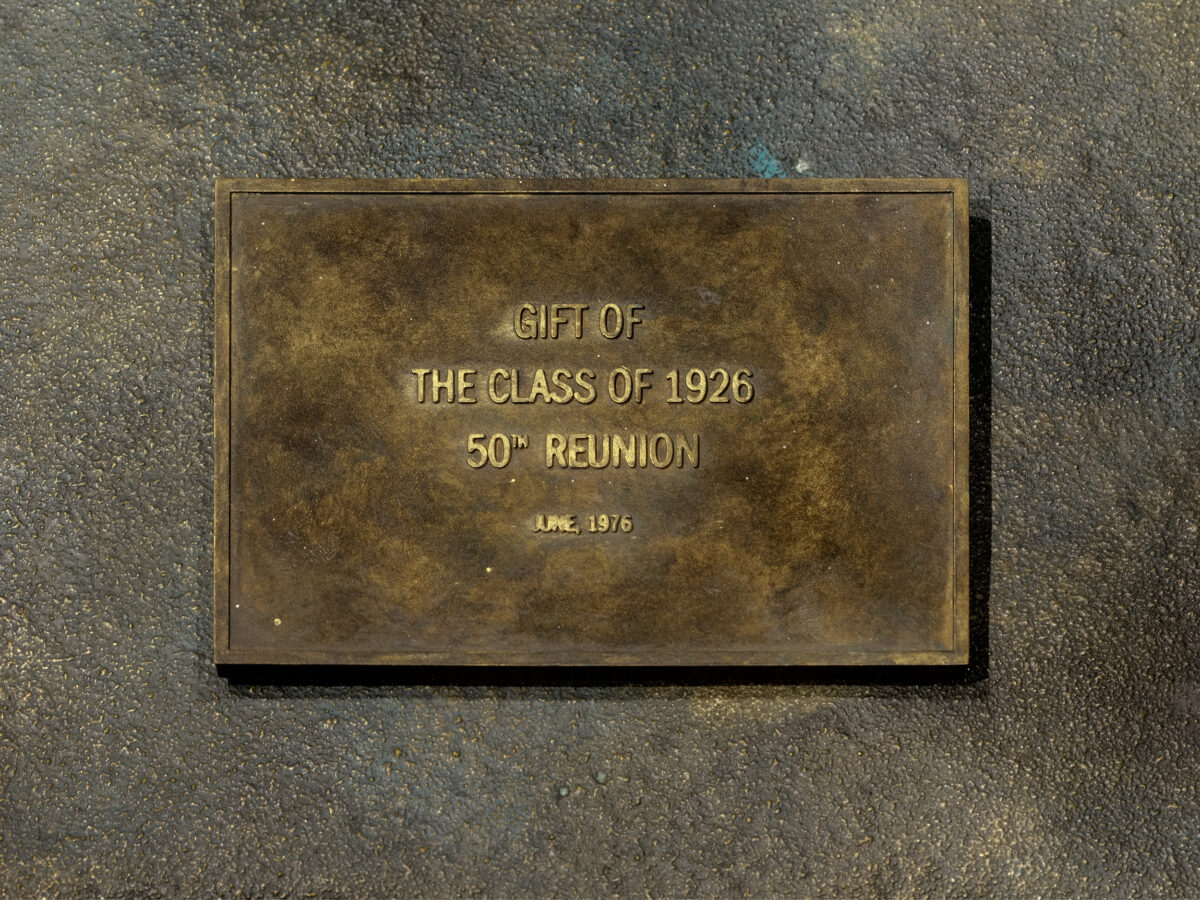 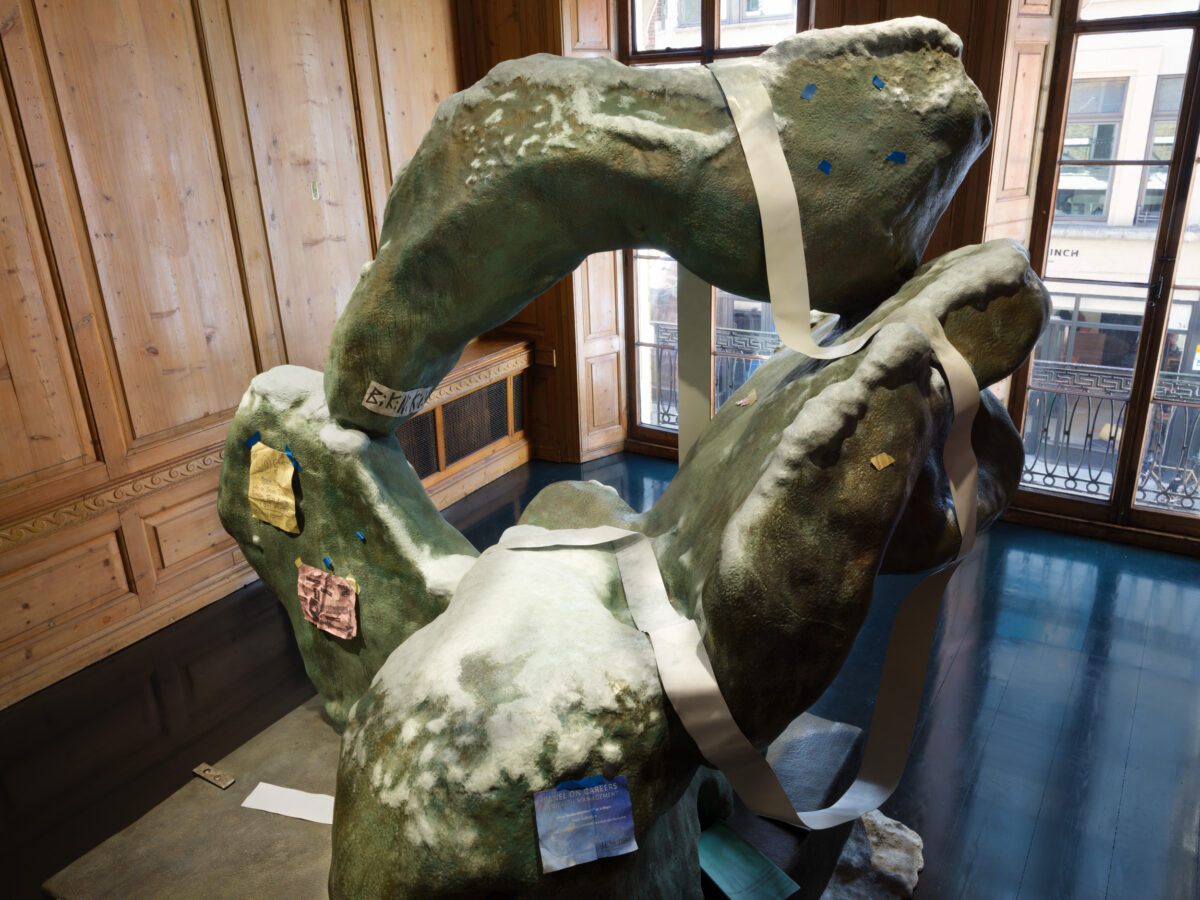 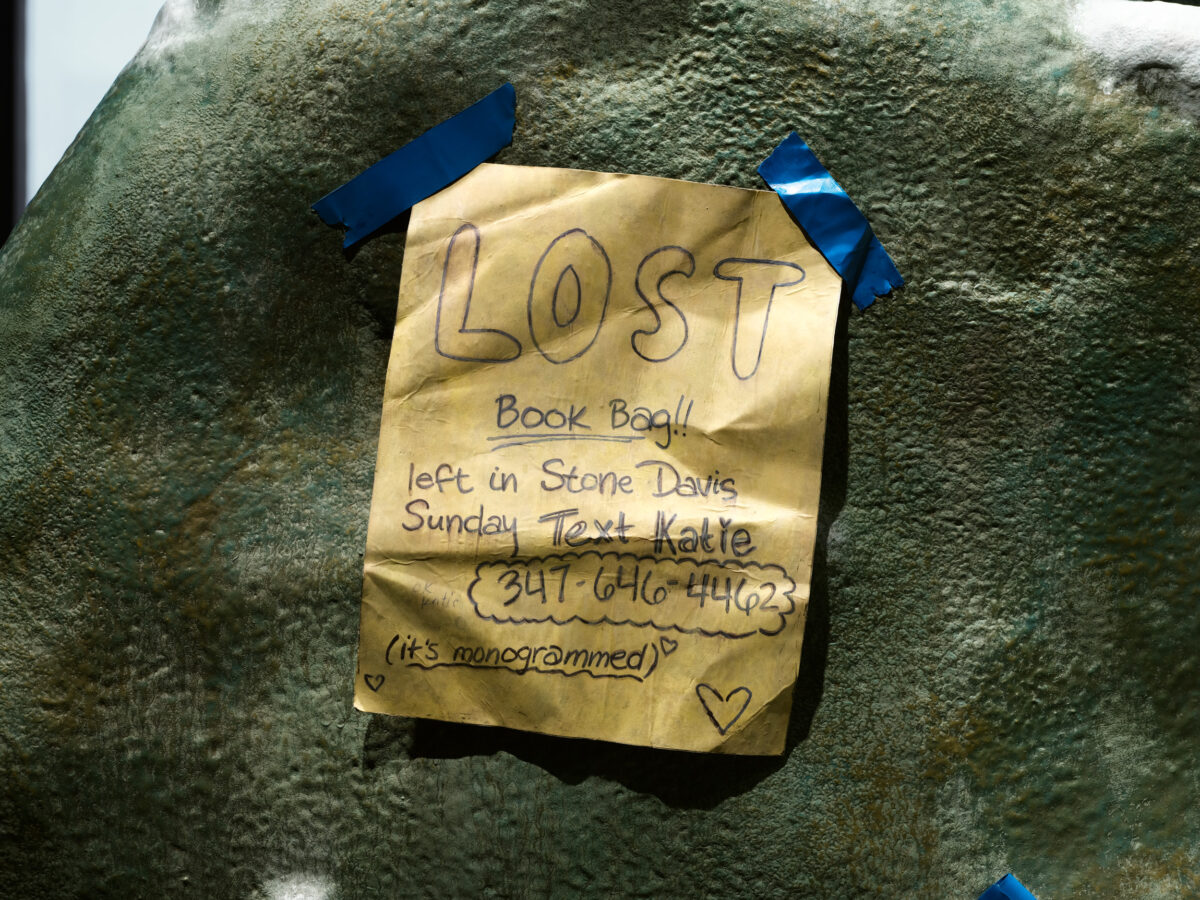 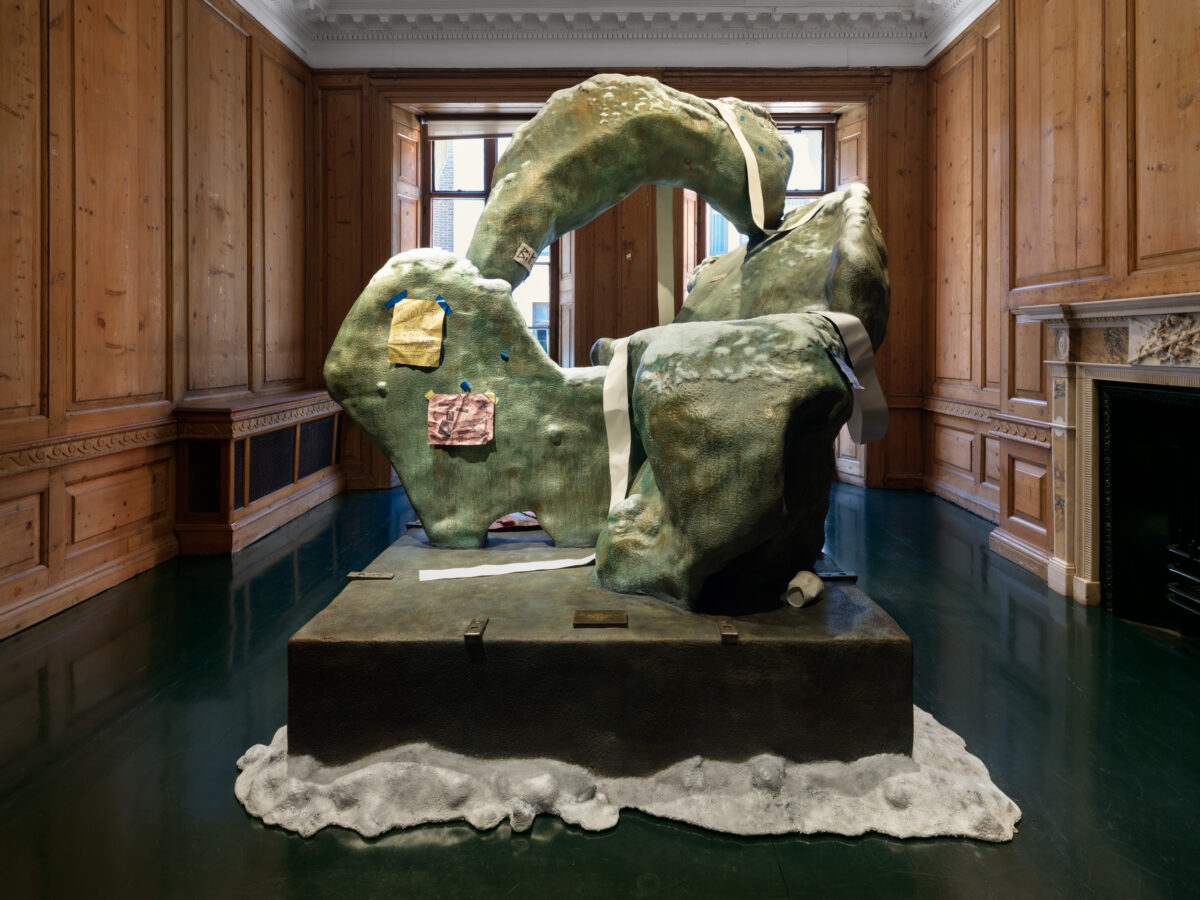 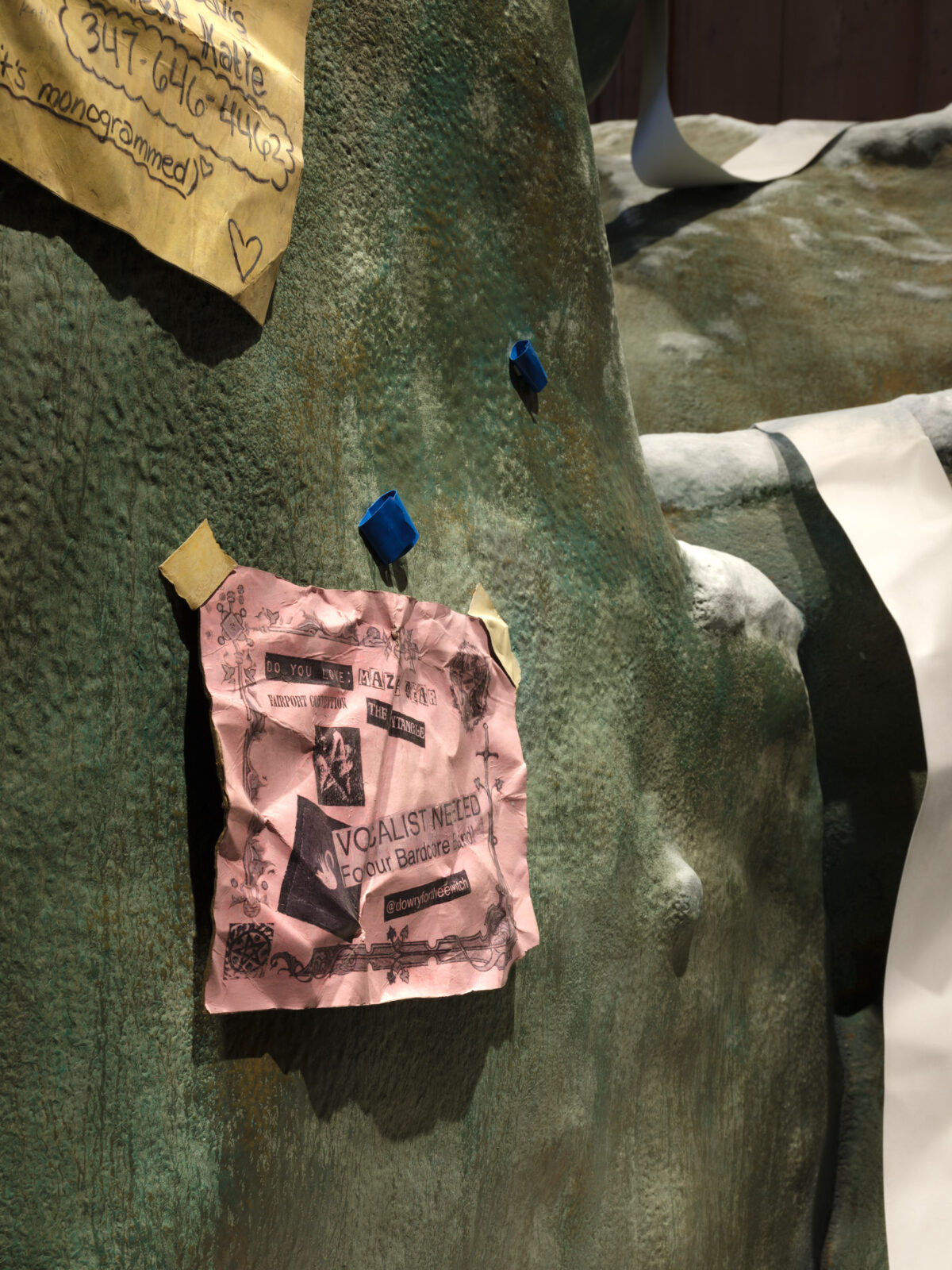 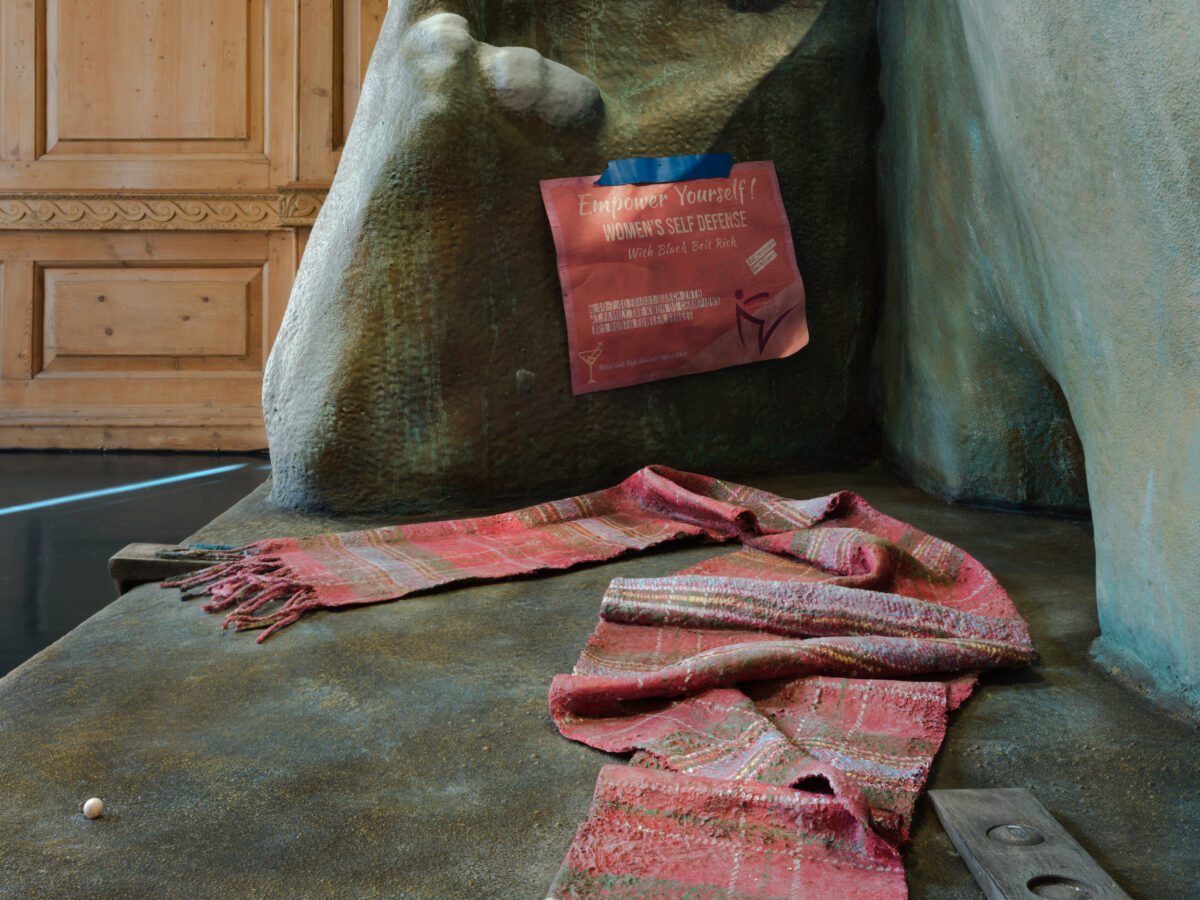 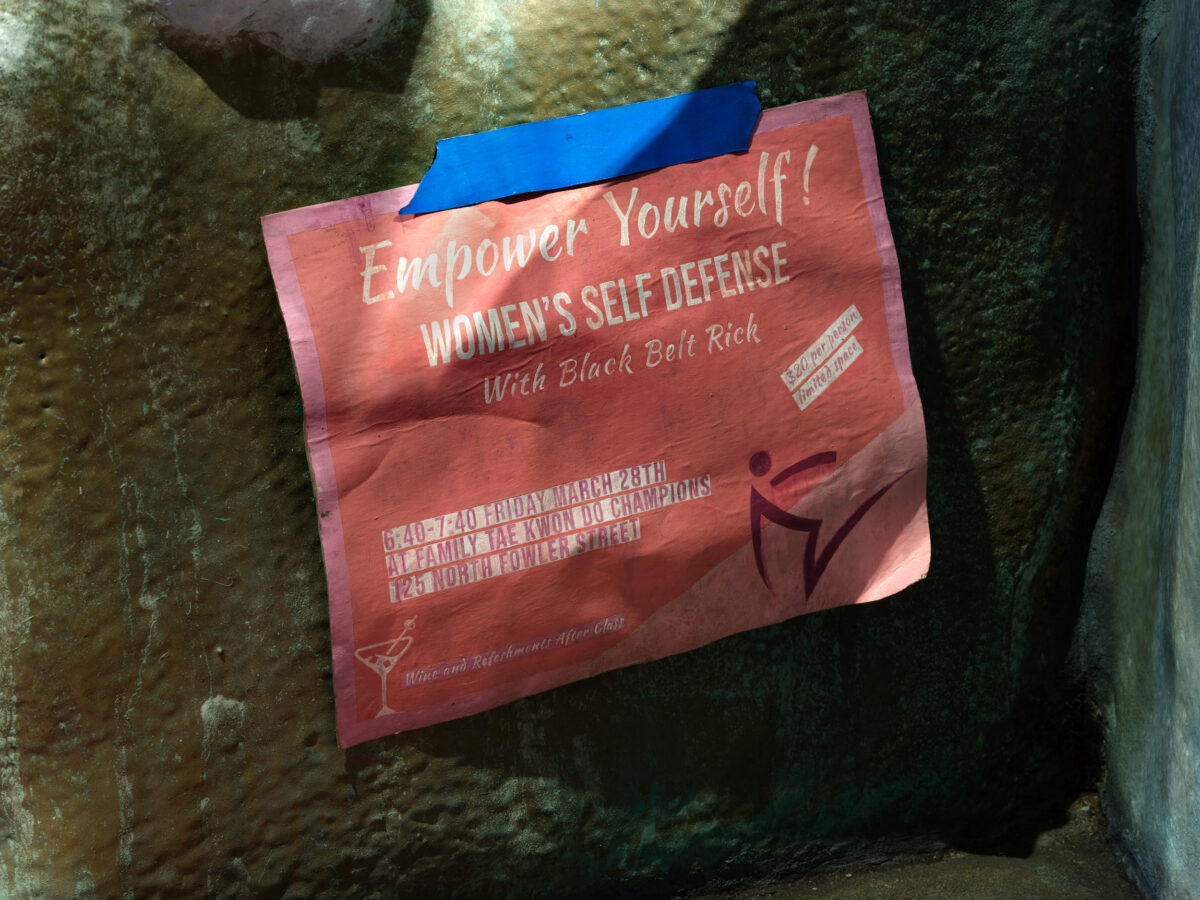 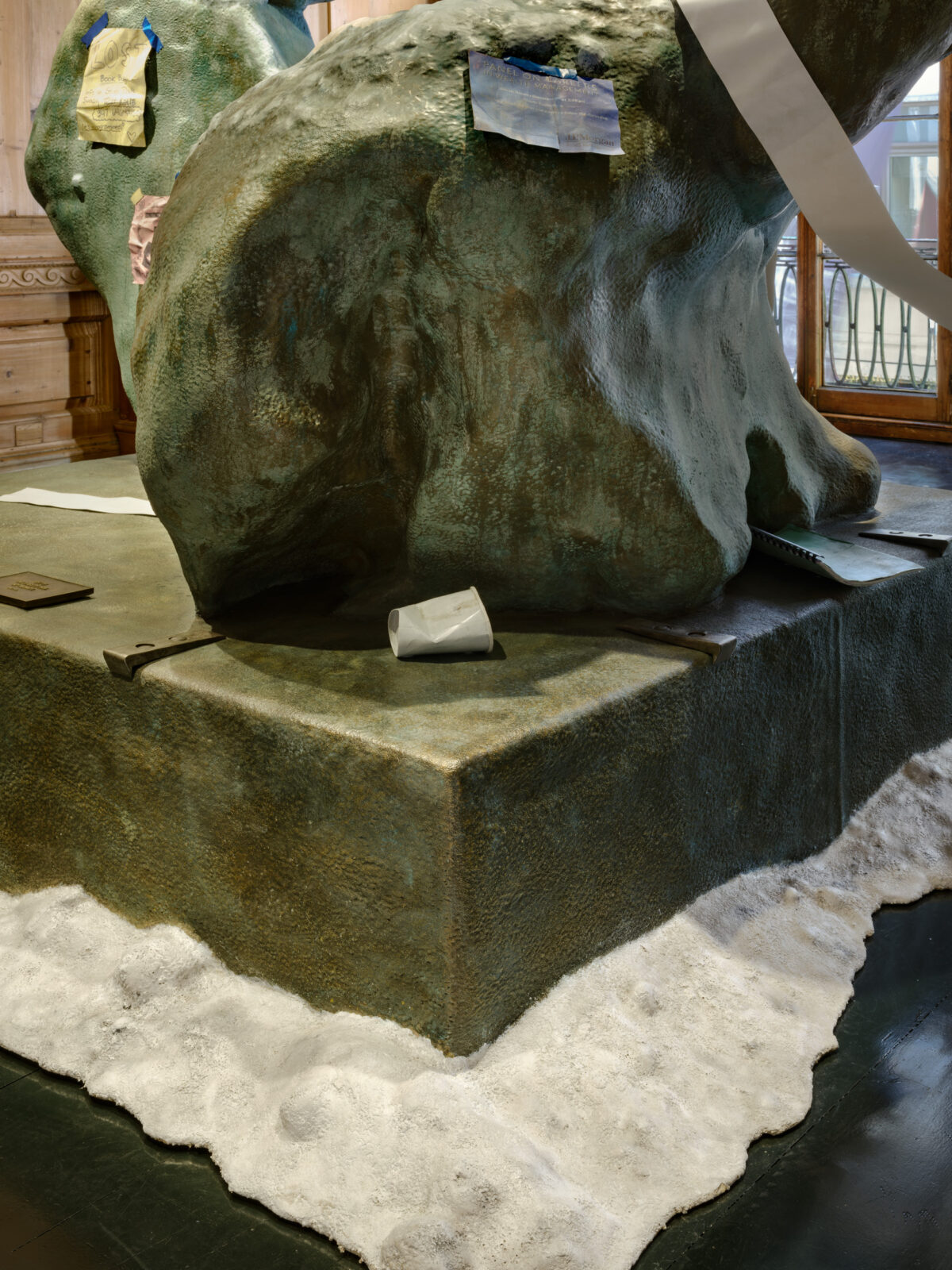 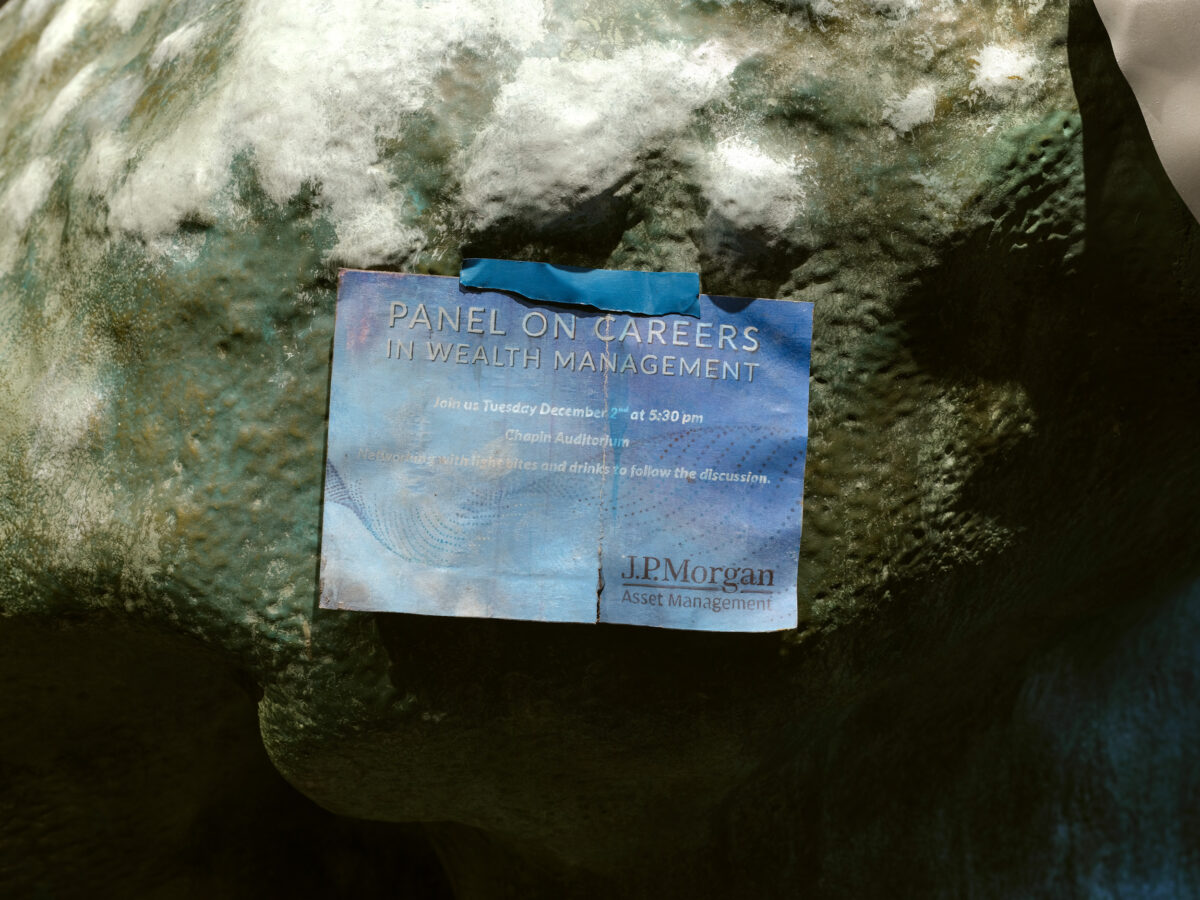 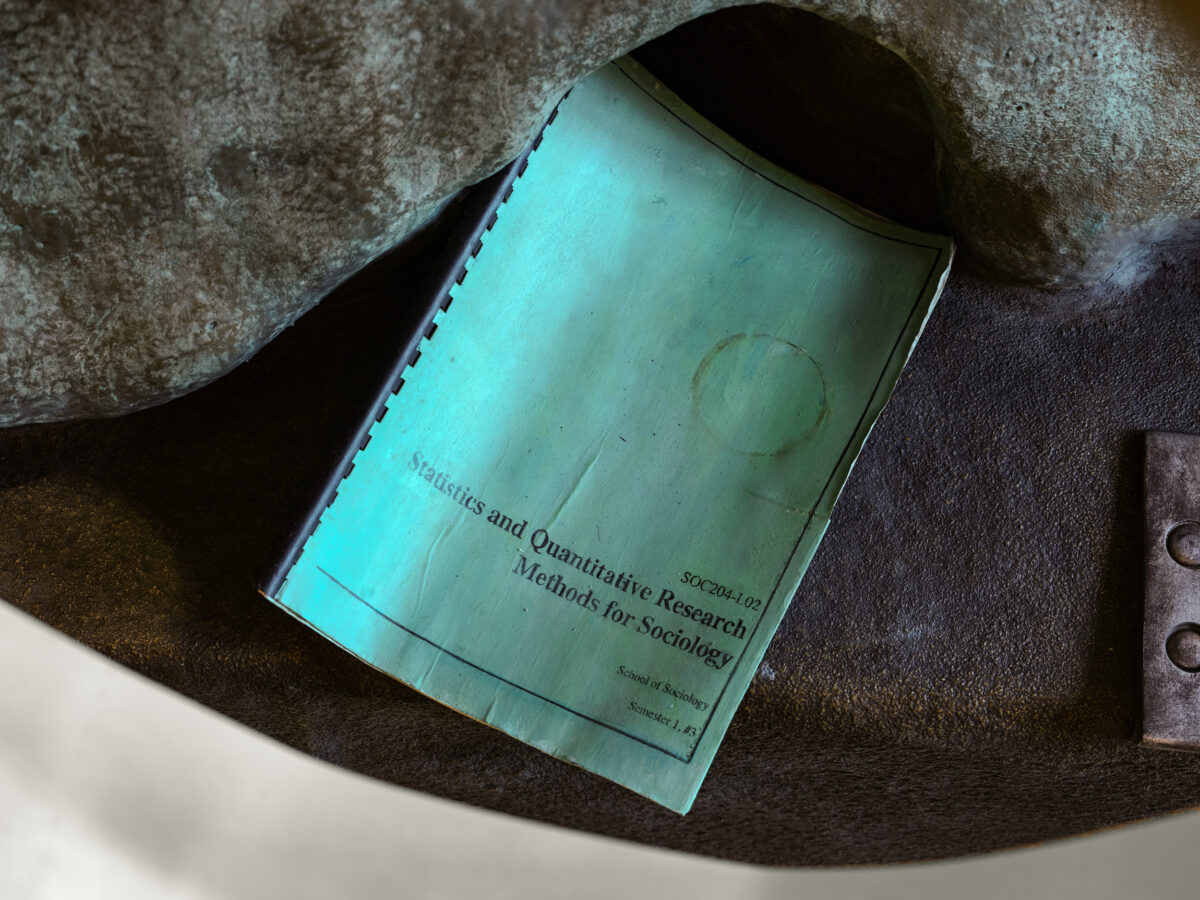 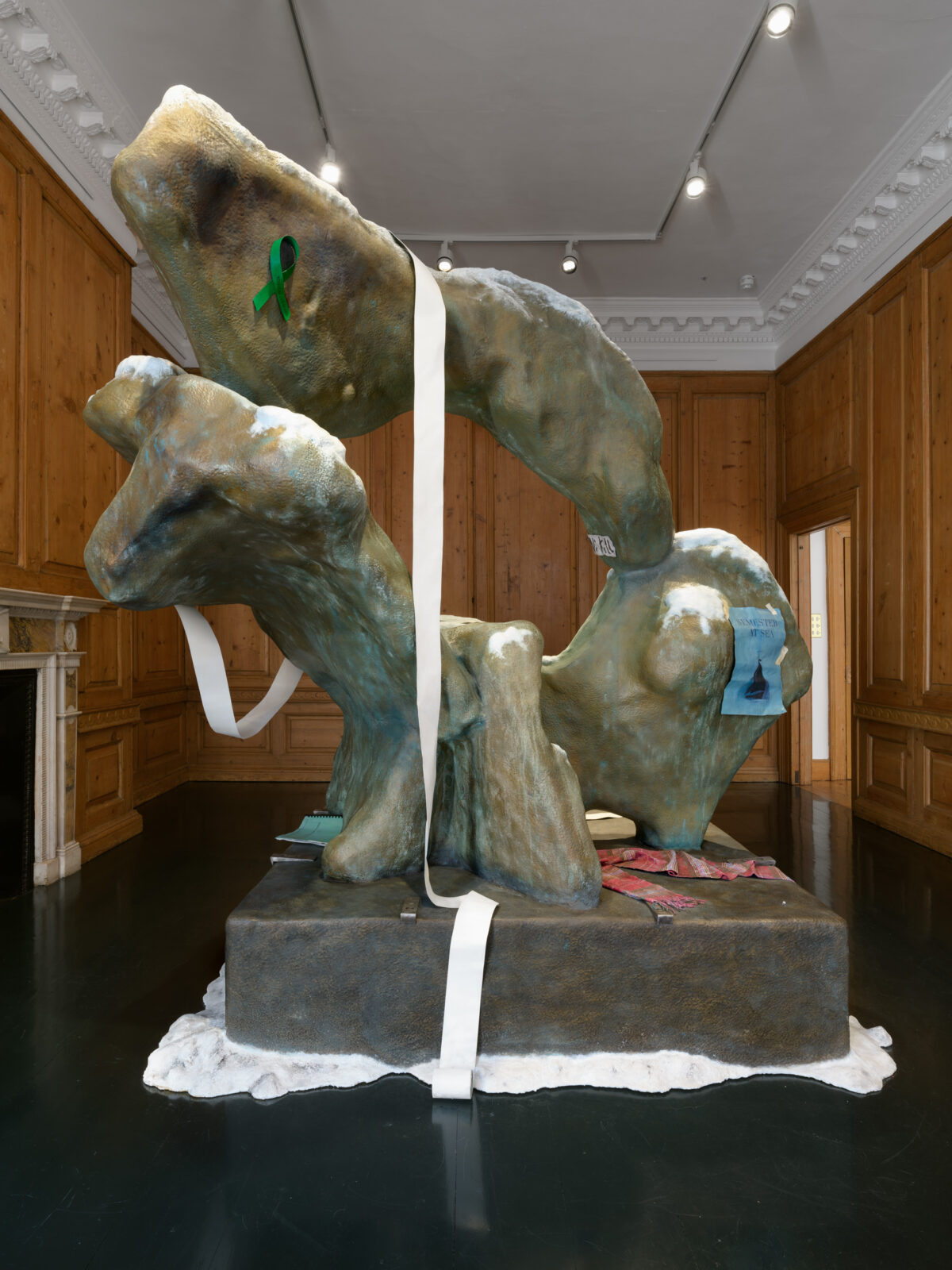 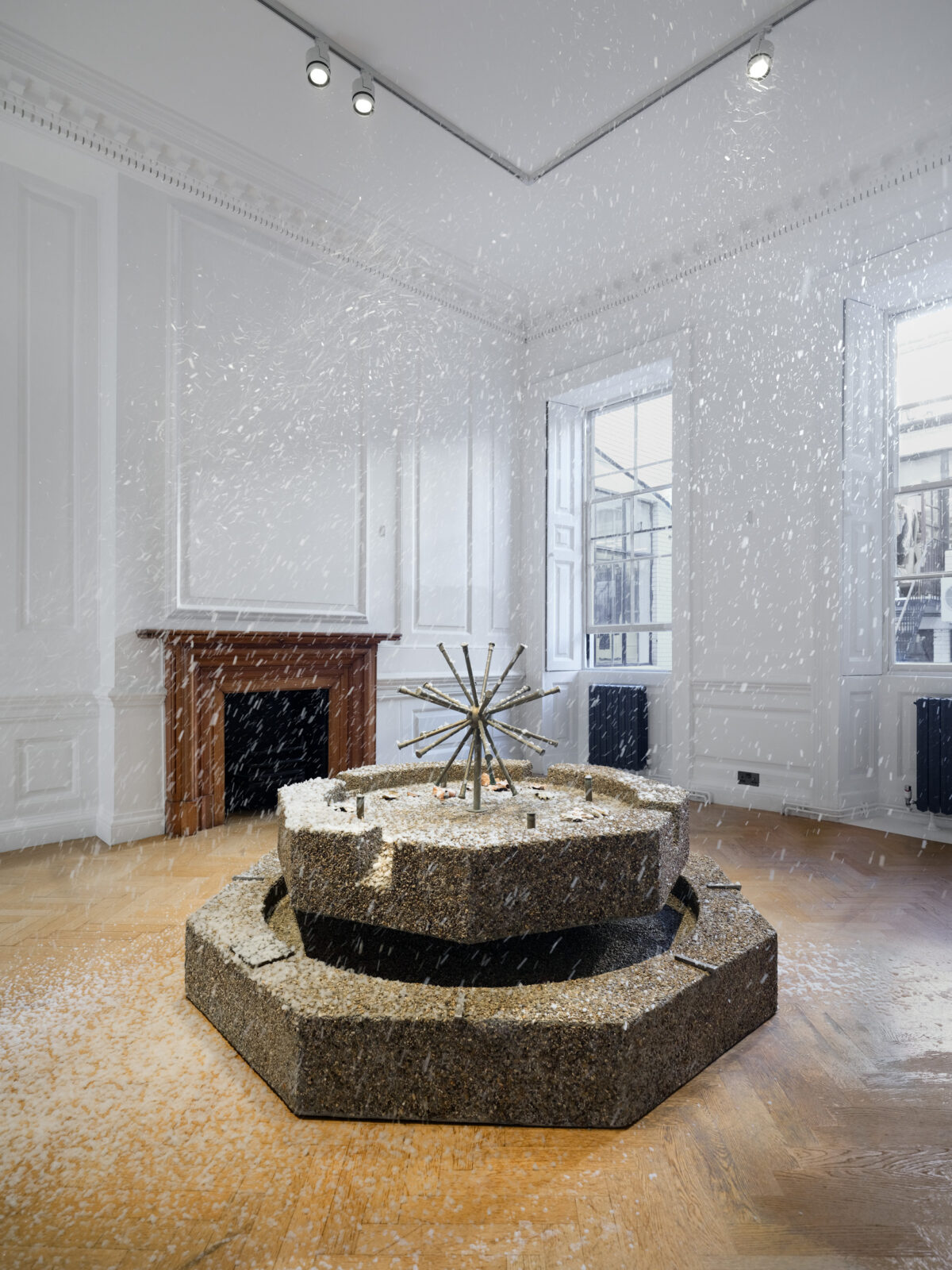 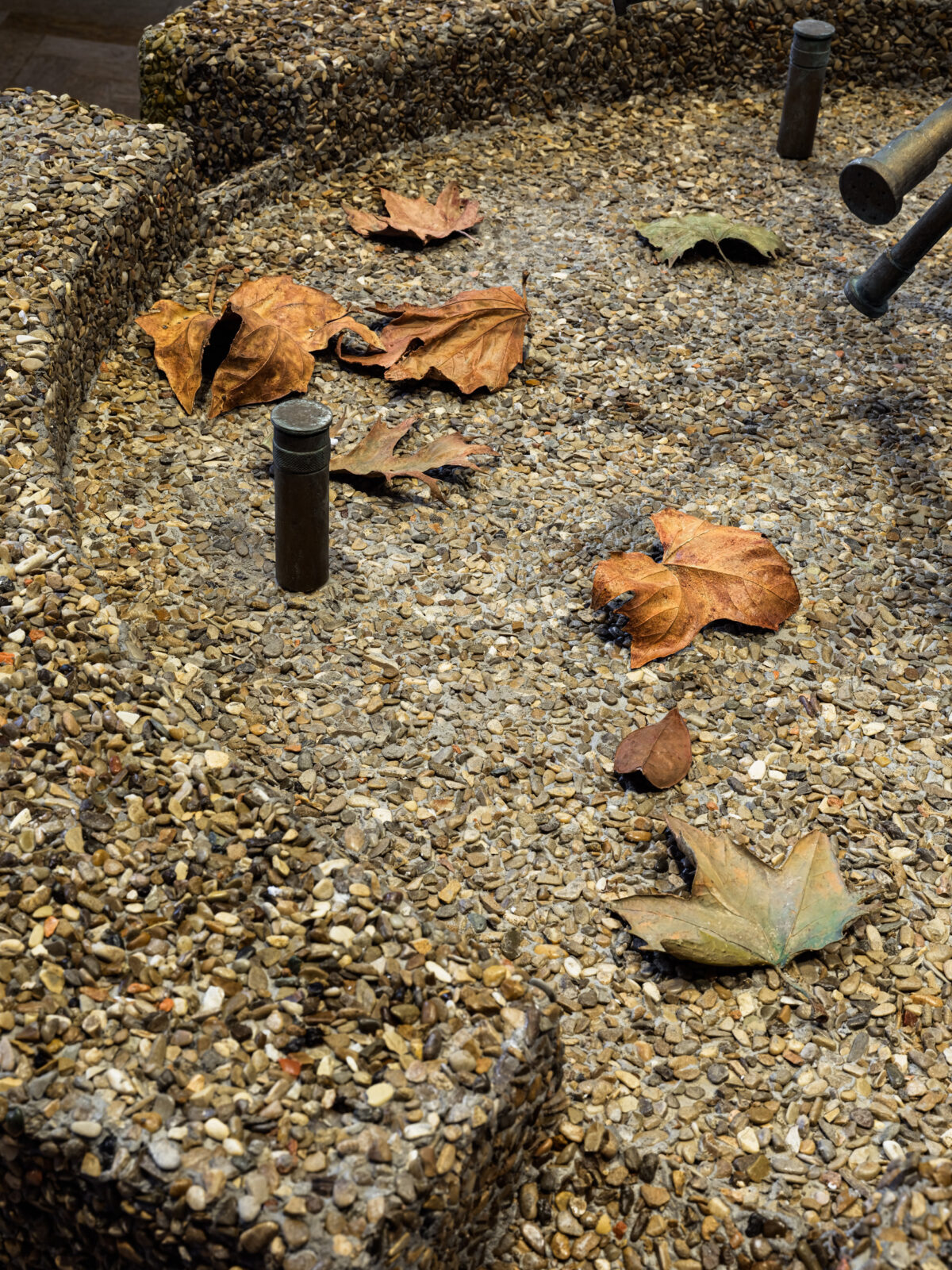 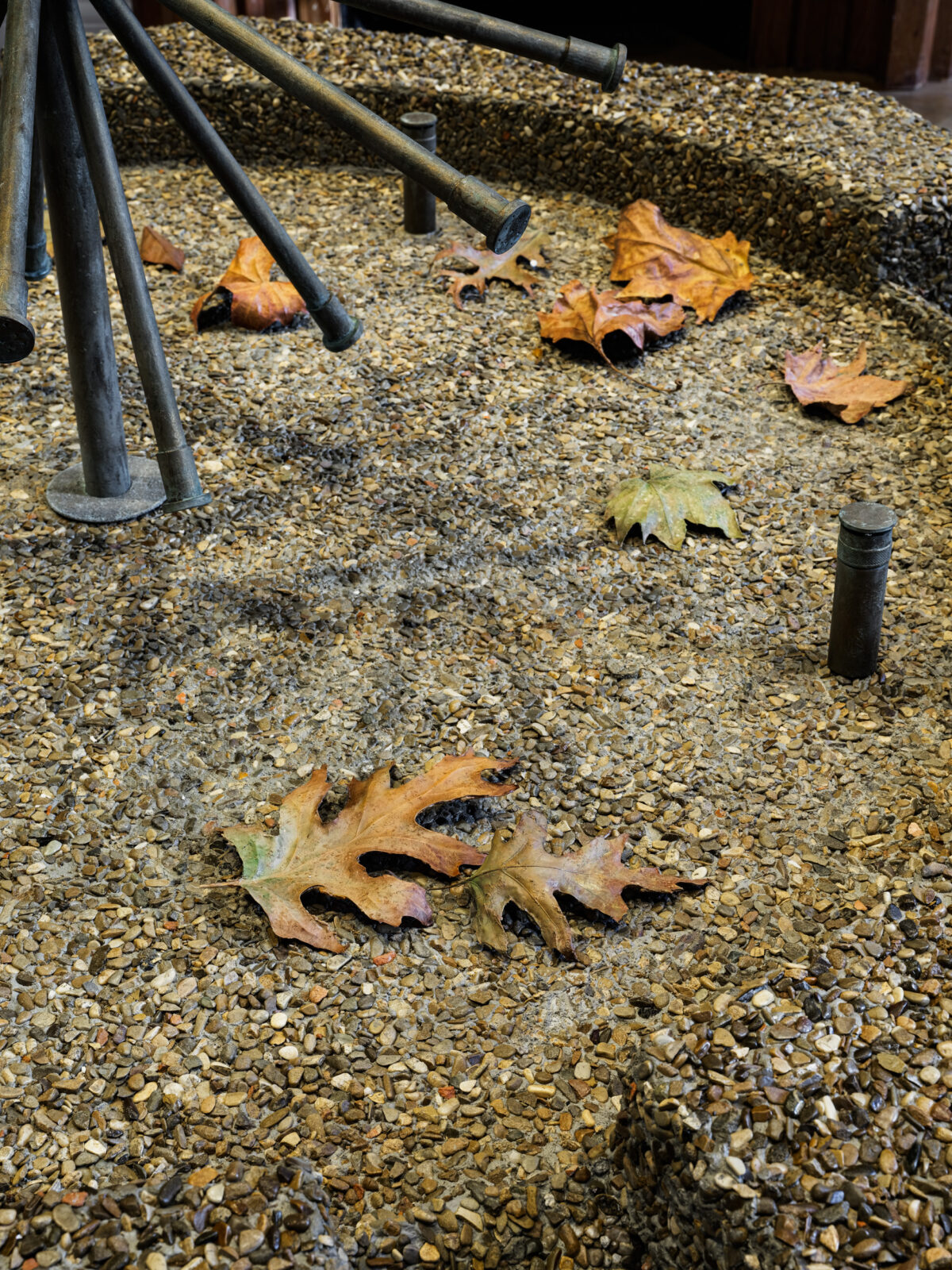 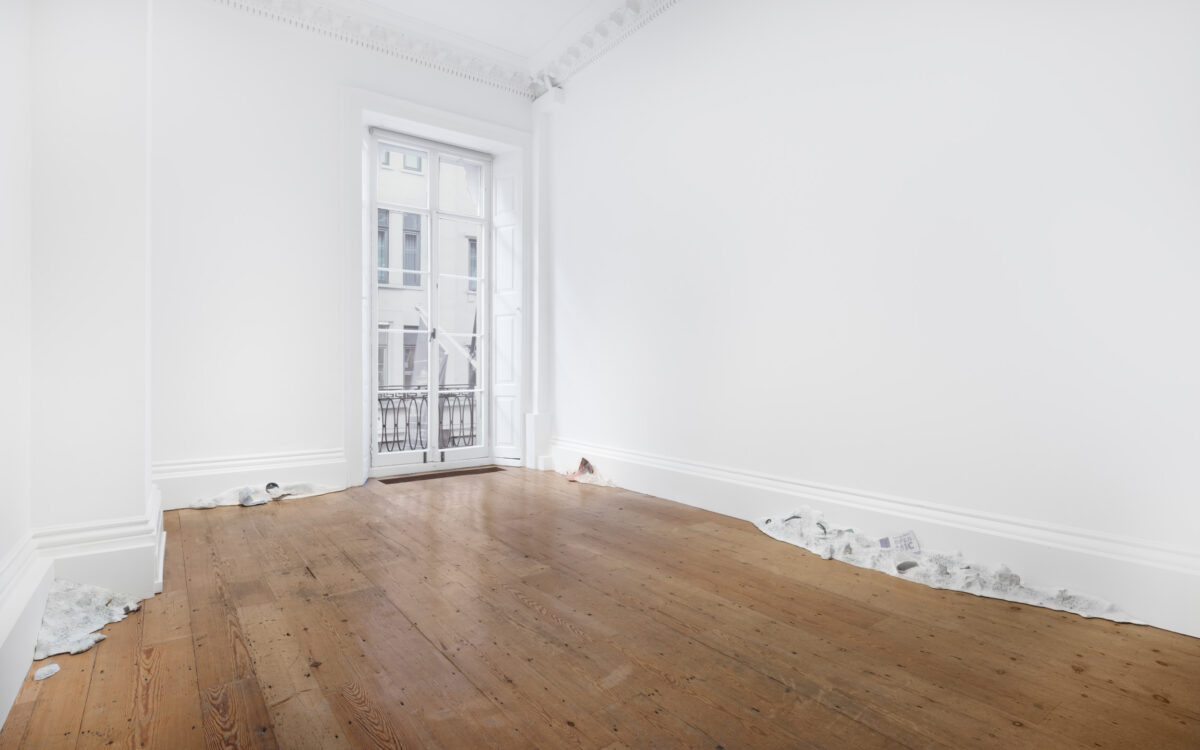 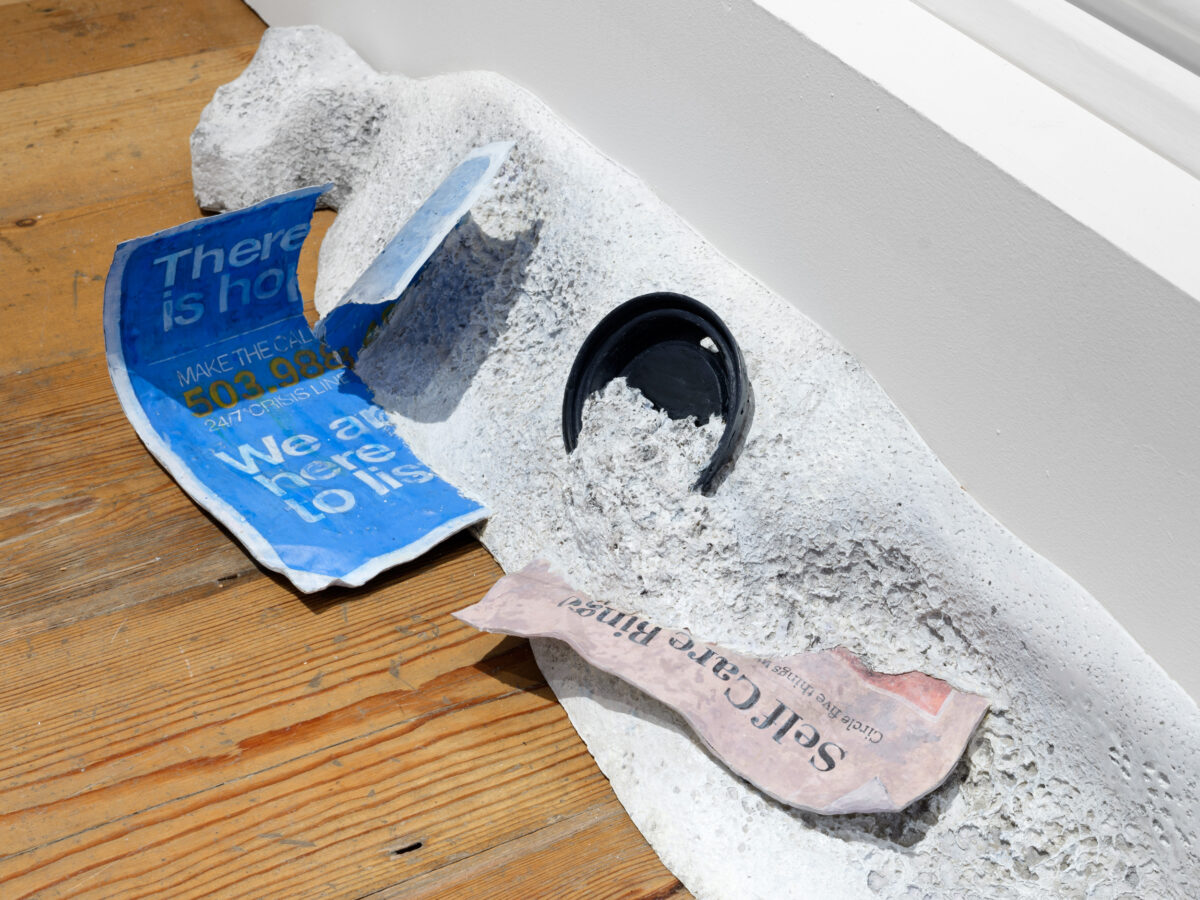 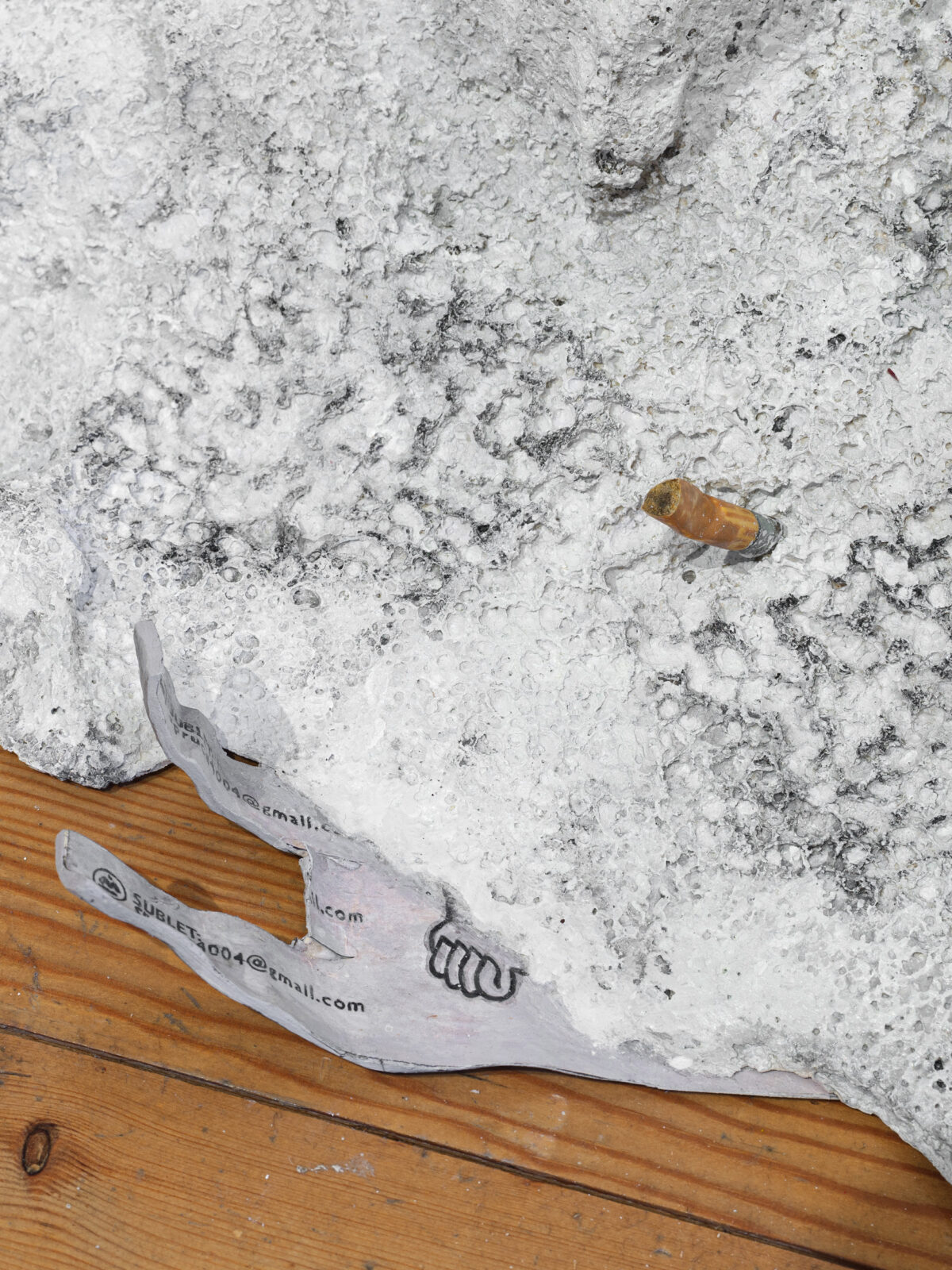 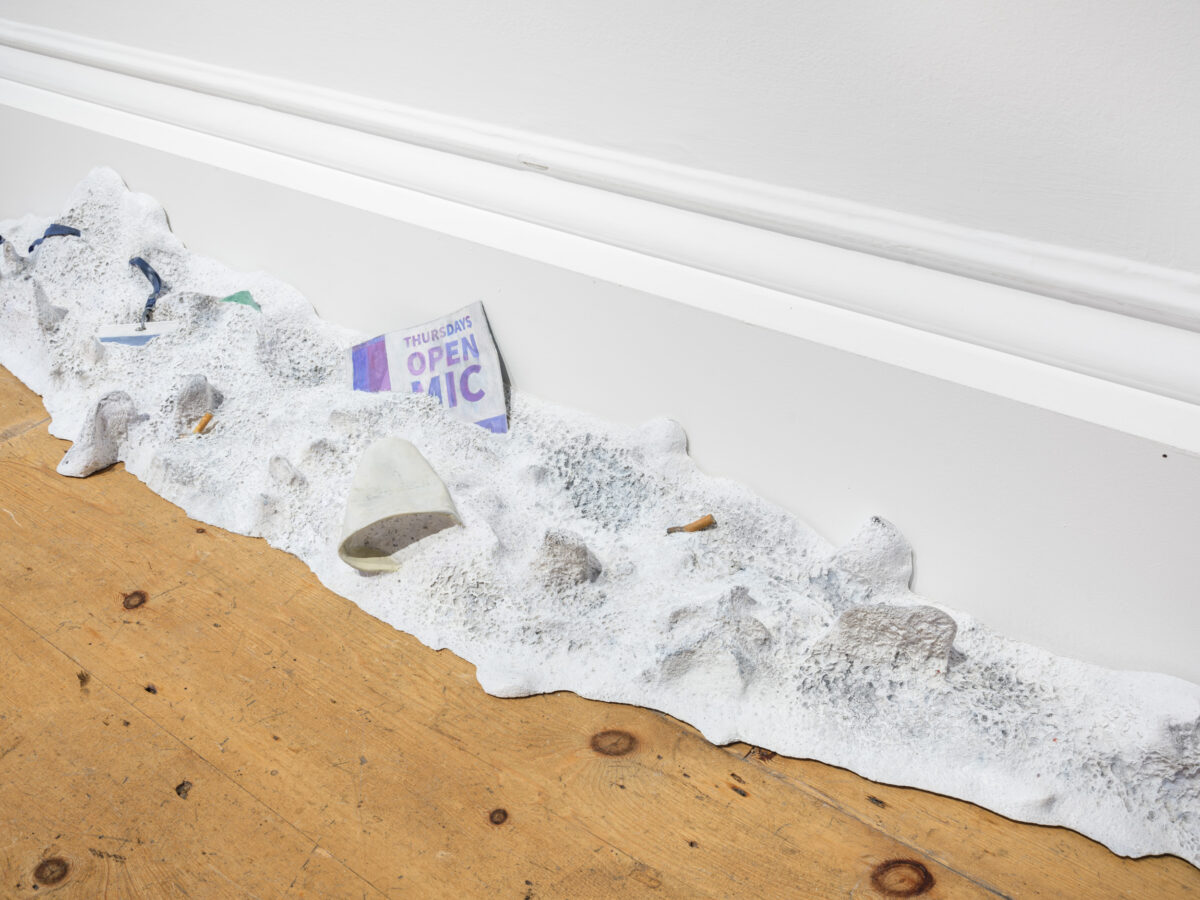 Carl Kostyál is delighted to present Winter Break, a new installation of sculptures by Cynthia Talmadge (b. 1989, New York), her second solo exhibition with the gallery.

The six pieces in this exhibition transport us to the campuses of liberal arts colleges and universities in the northeastern United States, deserted over the winter holidays. The works in Winter Break are emotive and suffused with a pervasive sense of melancholy – what Talmadge has described as “the feeling of being the only person left in the dorms over winter break.”

The detritus of a previous semester, left by students who have since departed school for vacation – discarded flyers advertising expired student activities and unutilized mental health resources; cigarette butts; coffee cups; a lost scarf and earring; a used nitrous cannister; an abandoned course reader – are scattered across or attached by peeling tape to the bulbous bronze surface of a second-rate Henry Moore-derivative sculpture whose amorphous structure dominates one gallery in Class Gift. This looming biomorphic abstraction, so familiar as to render it invisible to the passing student, is treated as a bulletin board rather than an object of aesthetic contemplation. It is a paean to failed ambition, perhaps that of a school alumnus whose artistic reputation has long since dwindled into oblivion. The final insult to the sculpture within Talmadge’s sculpture is delivered in the form of a streaming roll of toilet paper, most likely courtesy of unseen fraternity members in a moment of post-exams revelry: a “gift” from the current class, draped insolently over a donation from 1976.

Modernist sculpture and brutalist architecture – forms originally motivated by utopian ideals – feature heavily in the settings of these colleges, intermixed during the 1960s and 1970s into campuses otherwise defined by colonial and neoclassical architecture. The superannuated relics of these movements – now carrying connotations of class, privilege, and hegemony that underscore the hypocrisy of the egalitarian rhetoric found in these elite educational institutions’ recruitment materials – become a central subject in Talmadge’s exhibition, particularly as they persist mutely within active, complex, and contested social spaces.

The pebble aggregate brutalist fountain depicted in the work from which the show takes its title is as intimately familiar as it is utterly forlorn, its already limited decorative potential having been shut down definitively for the winter along with its water supply. The inert object is only activated by the cast, hand-painted leaves apparently blown across its reservoir and a special effects snow machine continuously dusting the gallery in softly falling artificial fluff.

Talmadge’s subjects are represented naturalistically and with her usual attention to detail and minutae, but her painted sculptures possess a softness of touch that narrowly avoids trompe l’oeil and its discourses of verisimilitude and simulation. Talmadge instead makes use of her extensive research into craft and decorative arts traditions like midcentury painted tole furniture and the cold-painted bronze objets popular in 19th century and Art Deco Vienna. This rendering of exterior institutional subjects using languages associated with the decoration of domestic interiors subtly undermines their authority and grandiosity, personalizing the works with both warmth and the dark but playful humor characteristic of all of Talmadge’s work.

The exhibition is an elaboration of Talmadge’s earlier show at Carl Kostyál Milan, Seven Sisters, for which she began an ongoing series of Pointillist paintings of architecture on the campuses of a specific group of elite U.S. women’s colleges. As the artist says, “It felt important to me to make sculptures of objects from the kinds of environments I’ve been painting. I think they’re an opportunity to pose the questions about the overlap between ‘authentic,’ mediated, and performed emotional experience – this melding of cliché, melodrama, and public / private lived experience that is a central subject in all of my work – in an even more direct way. So here, the ‘snow’ is coming from an artificial, evaporative machine typically used on film sets, and it’s sort of a provocation: could that artifice become even more poignant than the real thing? This kind of question is a refinement of things I’ve been thinking about since my first solo show [her 2017 installation / photo series of reconstructed celebrity rehabs, Leaves of Absence].”

Talmadge also says that she “wanted more of an opportunity to explore how this bland, domineering, authoritarian architecture and sculpture is still providing the backdrop for the drama of life on contemporary college campuses. […] A lot of the brutalist stuff was built with crowd control in mind to suppress student uprisings after the late 60s, and now there are all sorts of other varieties of crisis playing out in and around these spaces – some of them issues that have remained unresolved, others that have morphed or worsened, and some that are responses to new forms of societal strain.”

Seen in this light, Winter Break is as much a continuation of Talmadge’s unfolding engagement with the darker corners of the firmament of American cultural history as it is the vacation or the descent into psychosis its title might imply.