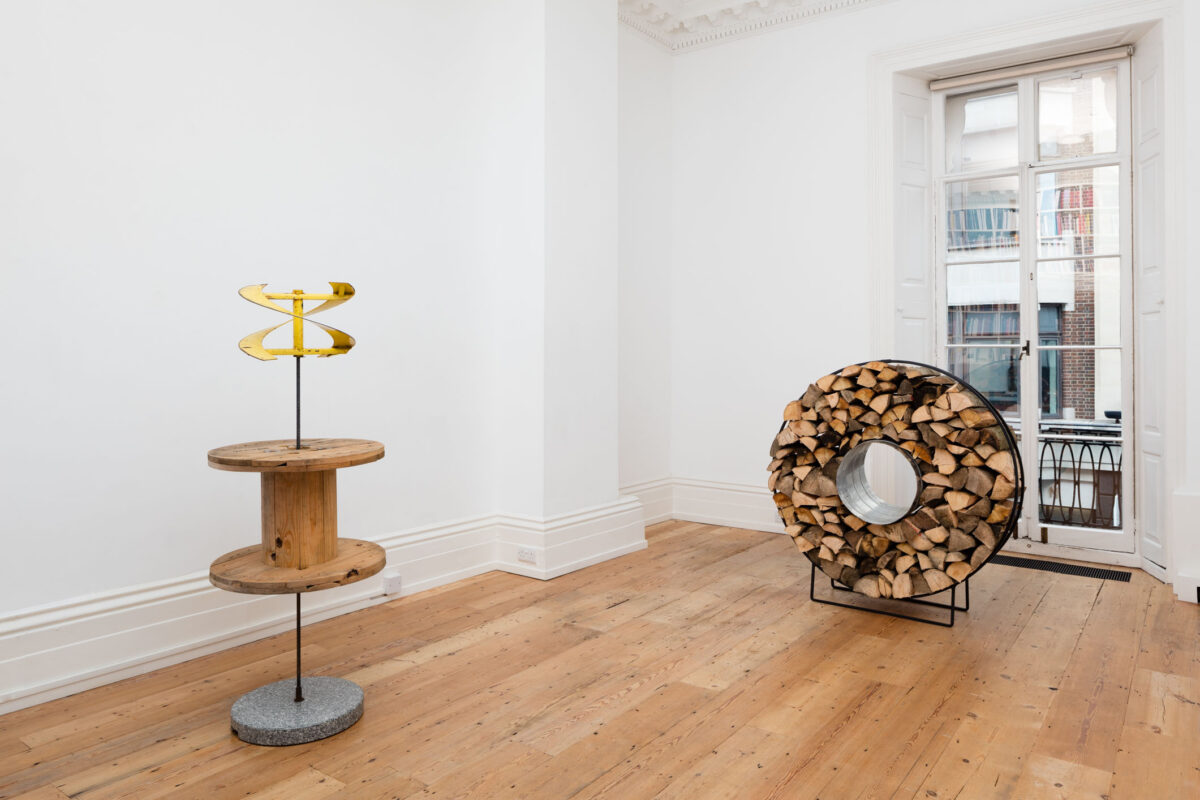 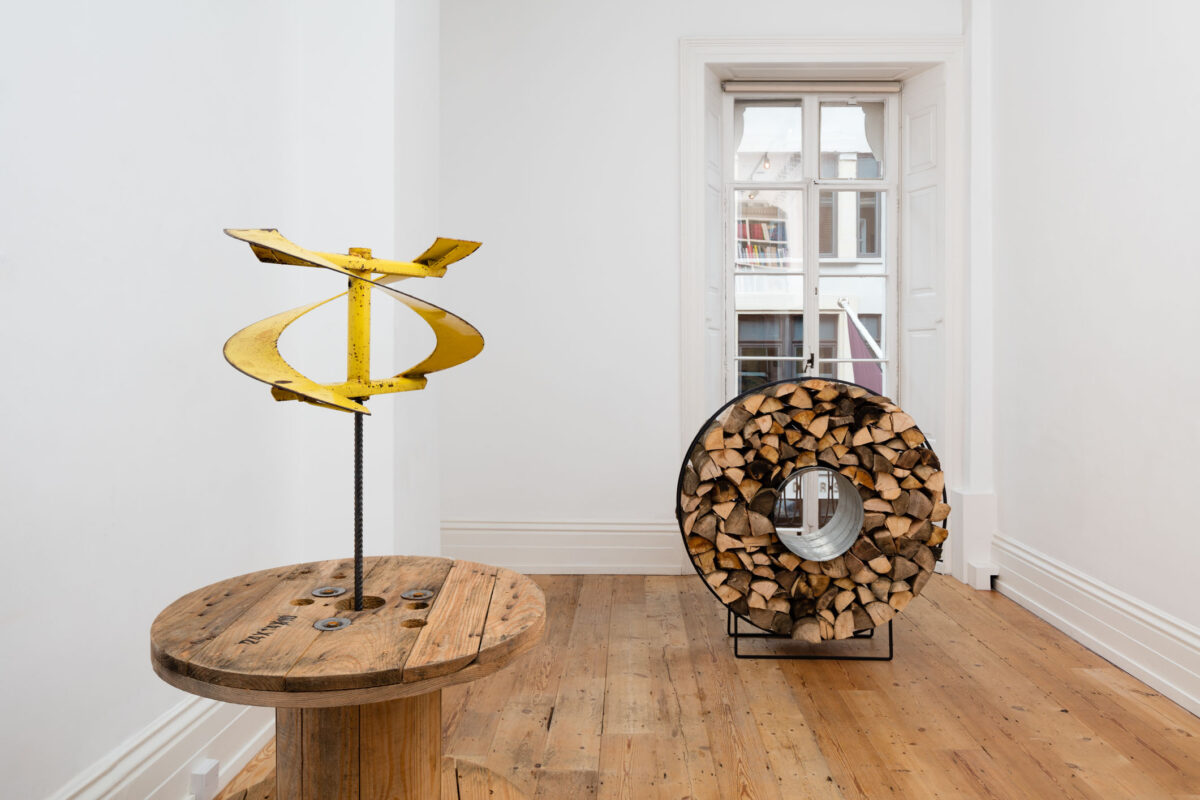 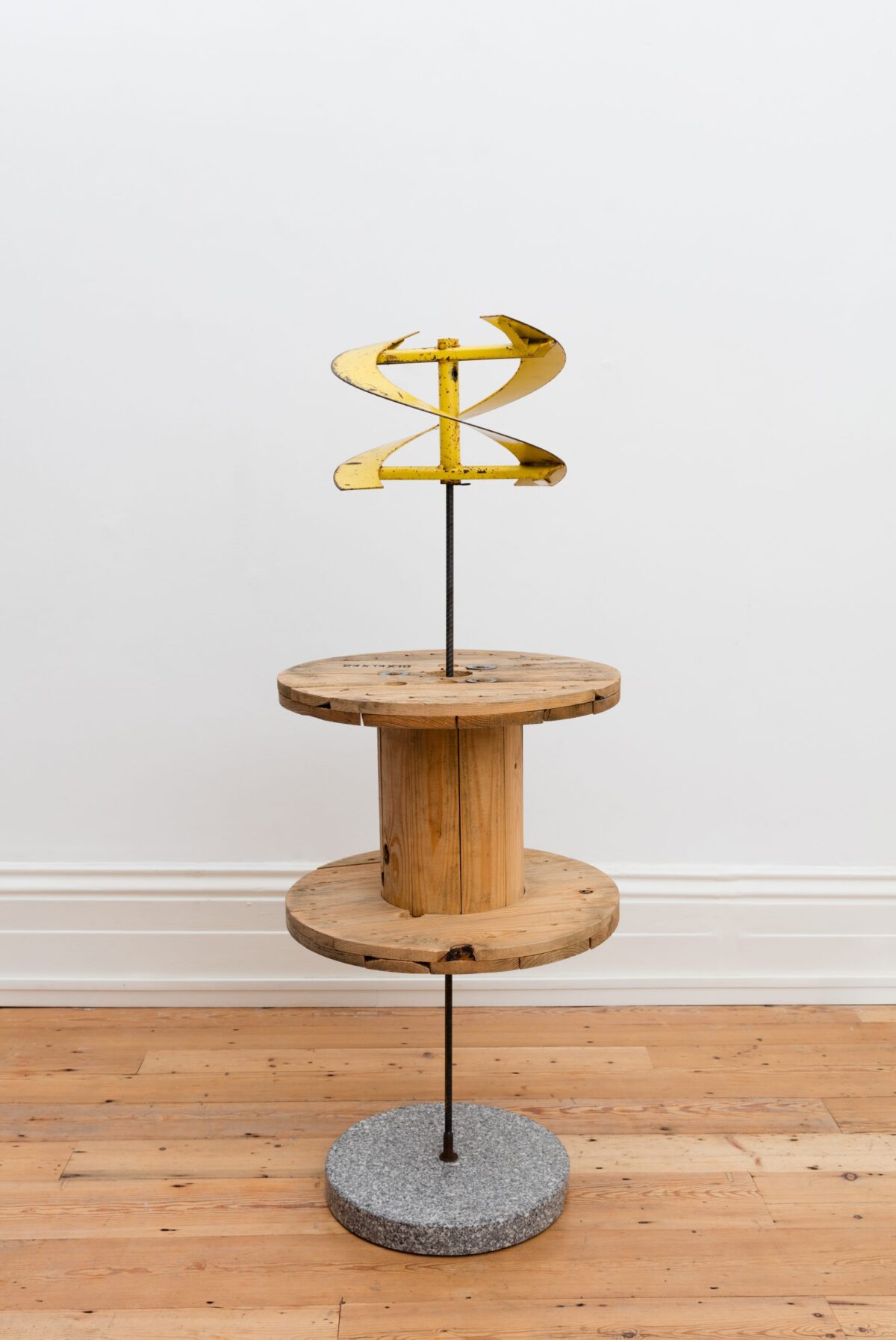 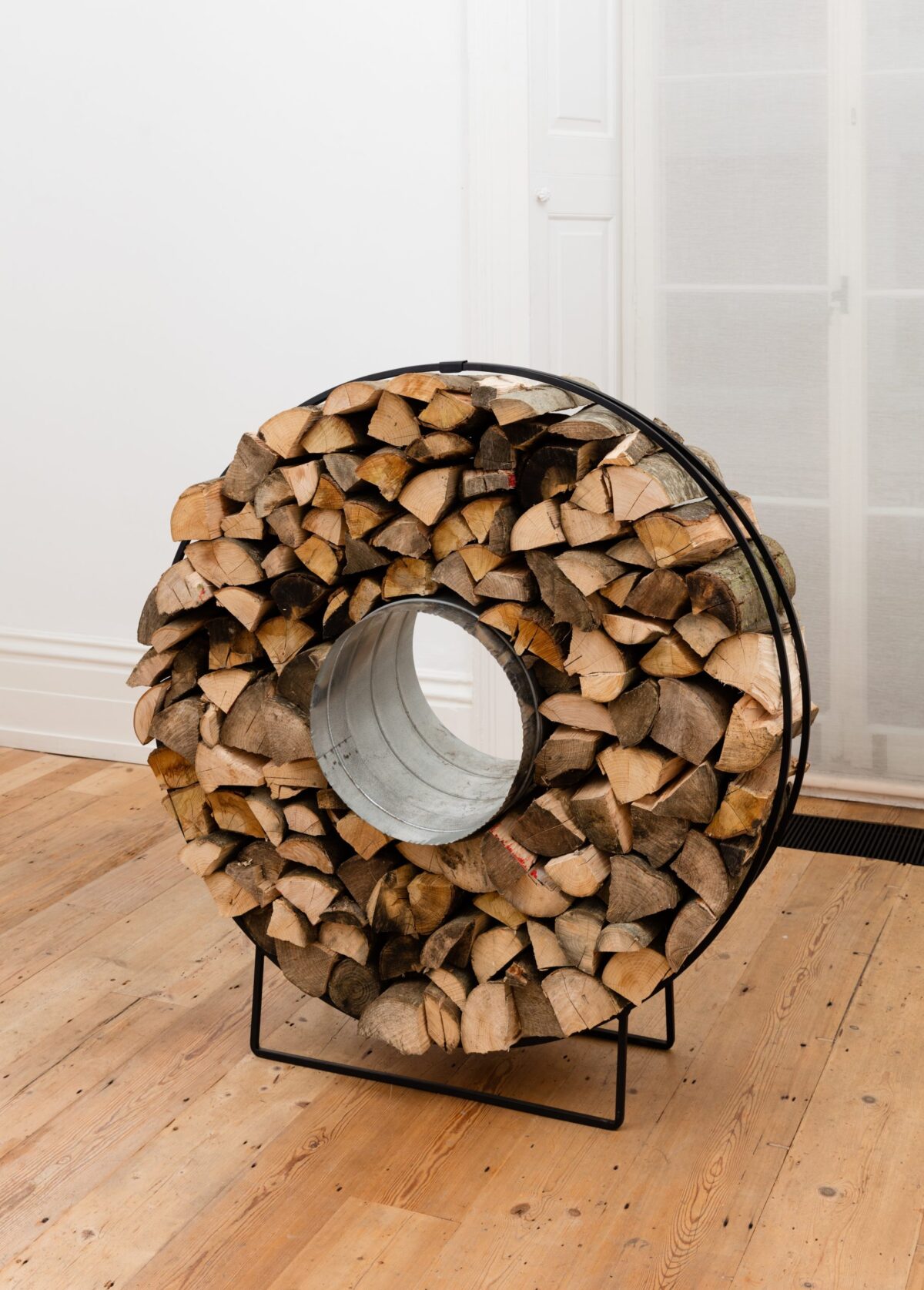 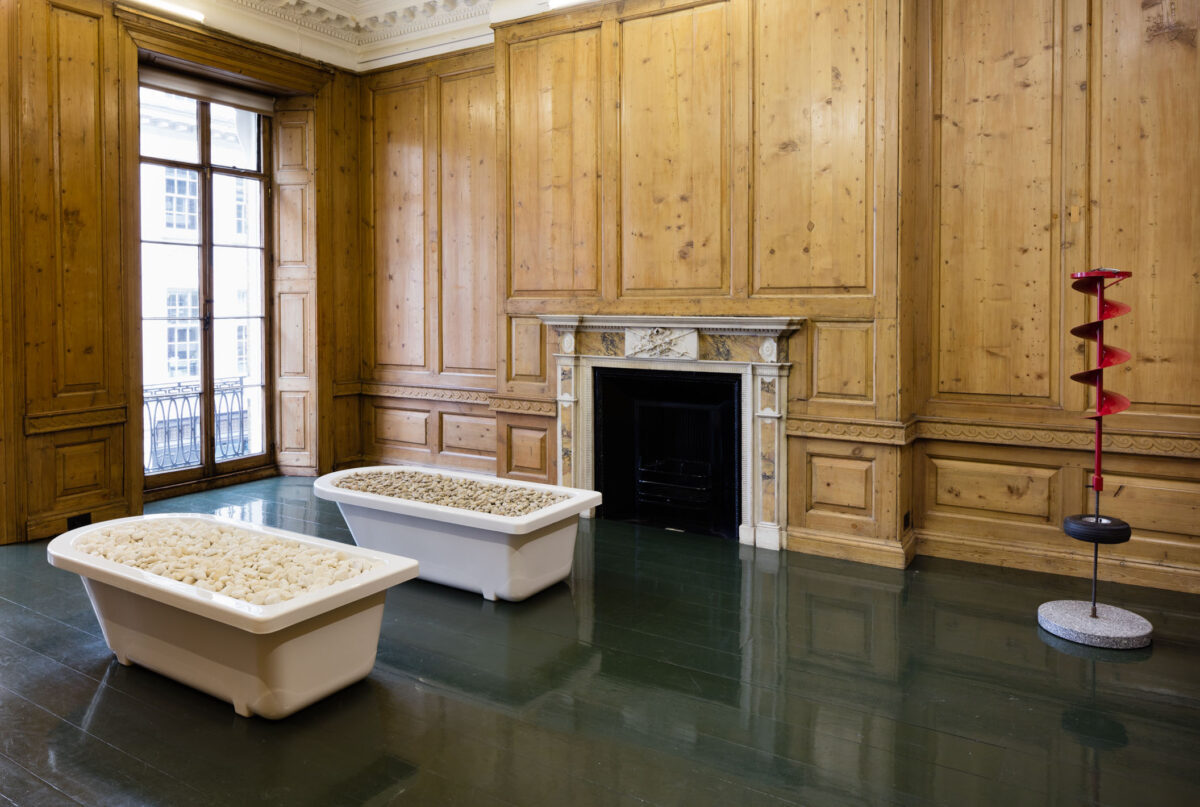 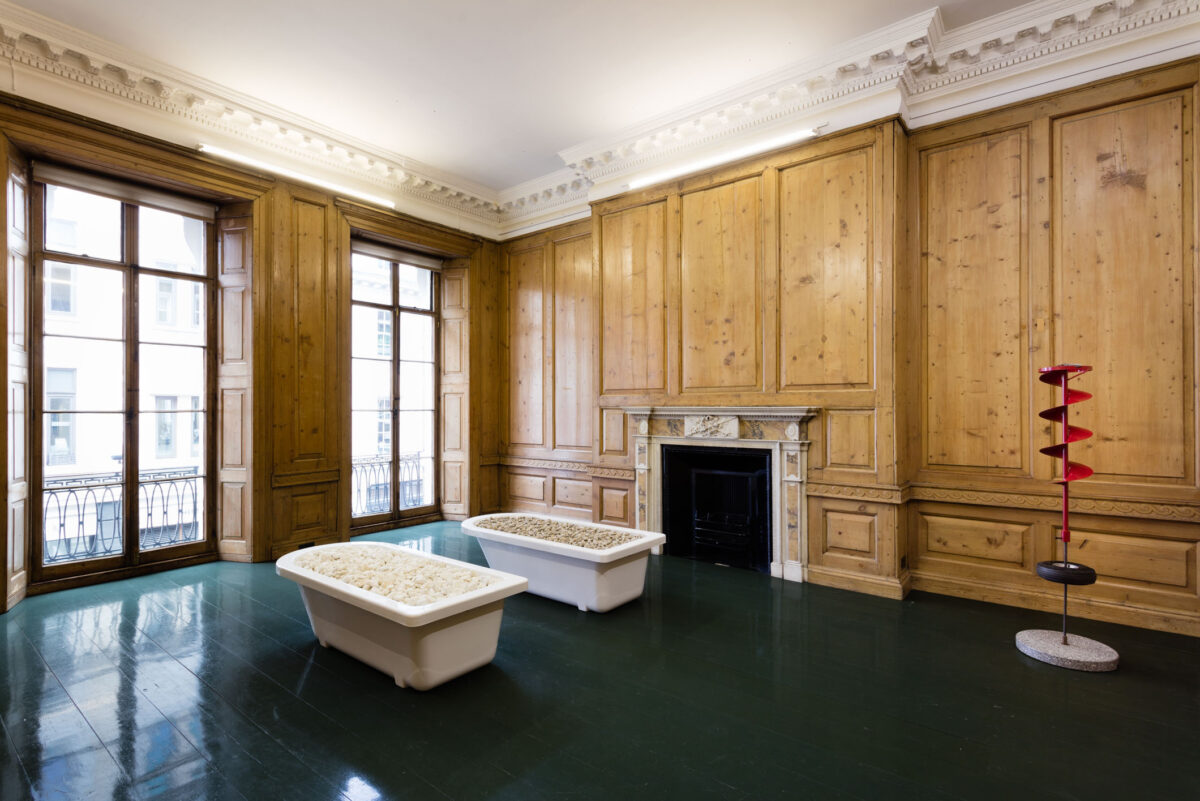 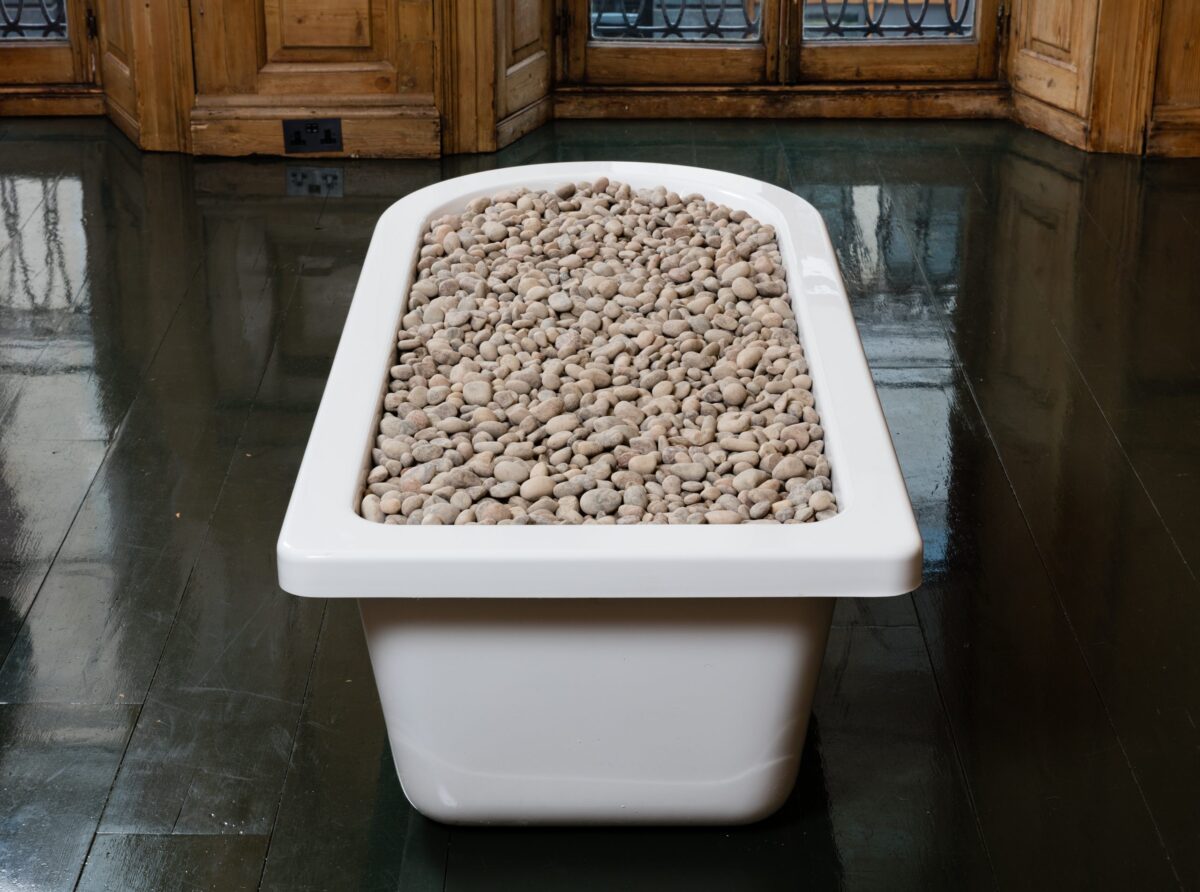 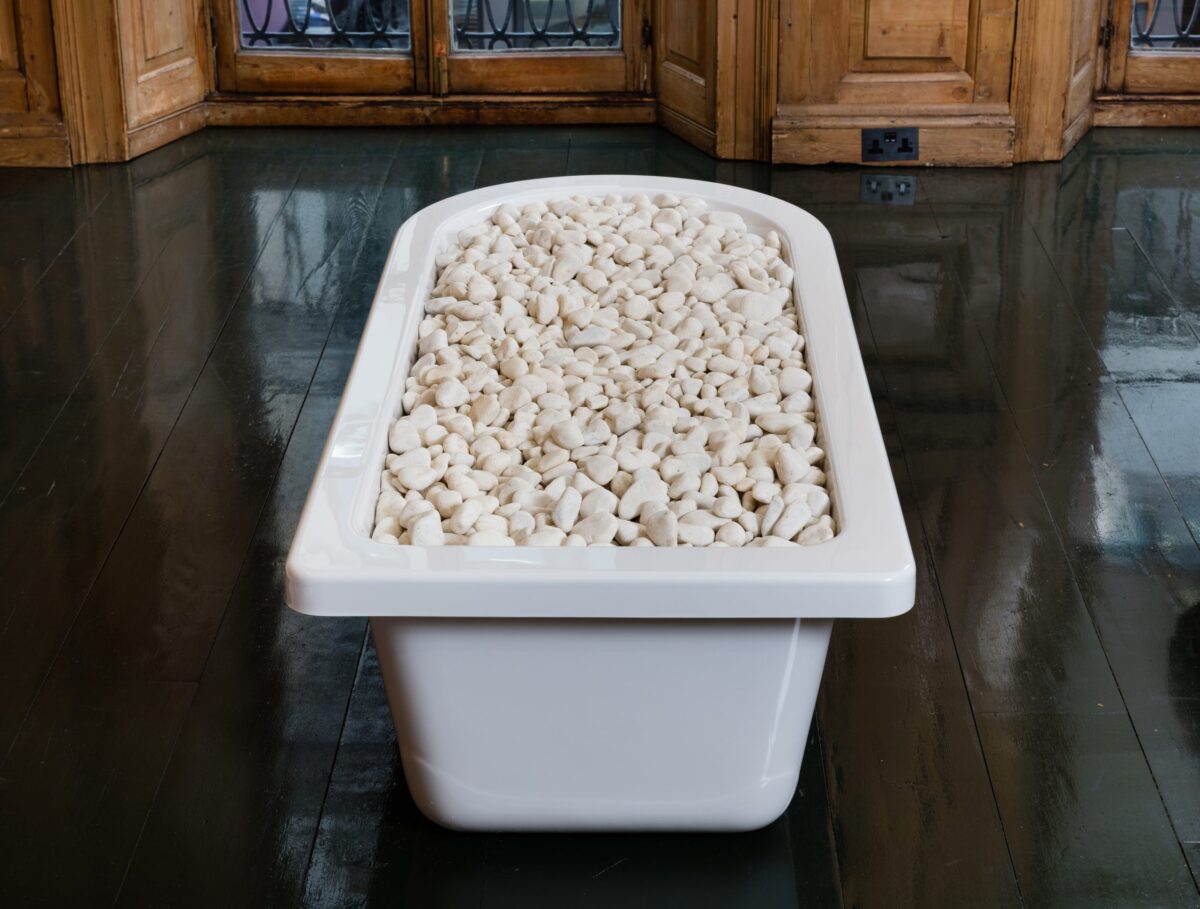 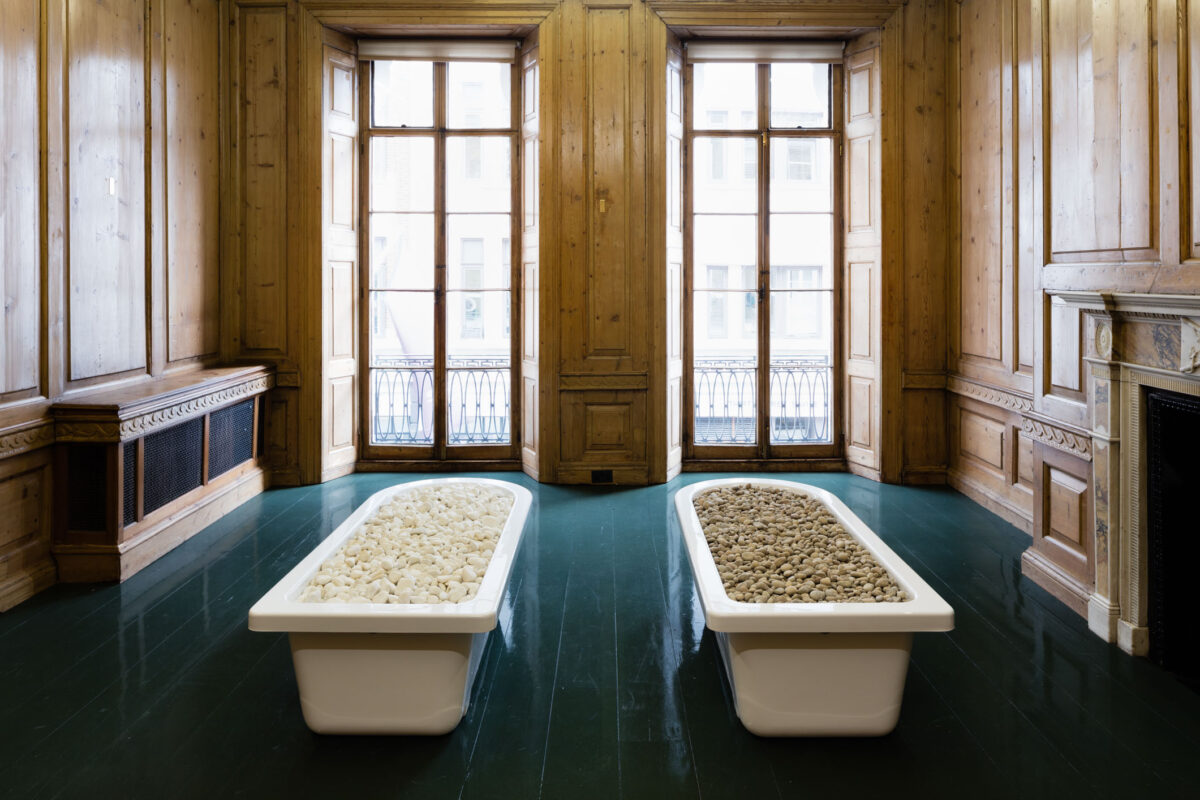 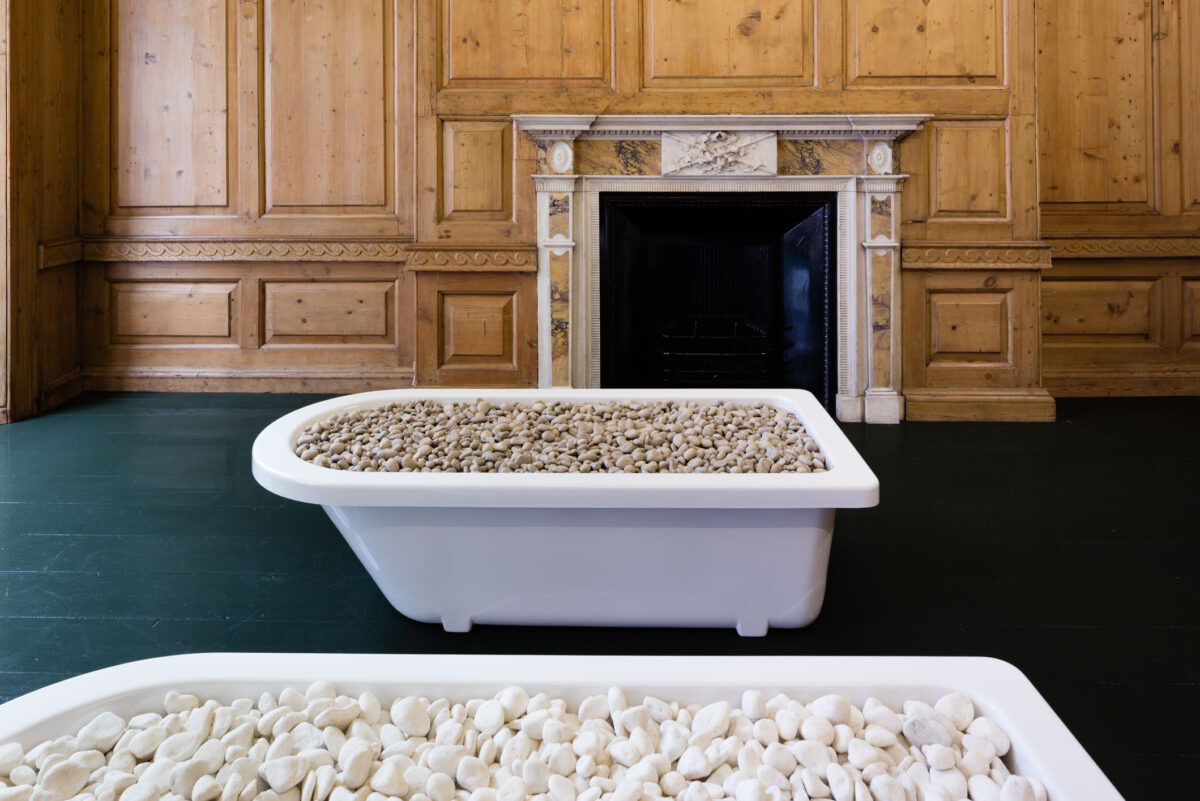 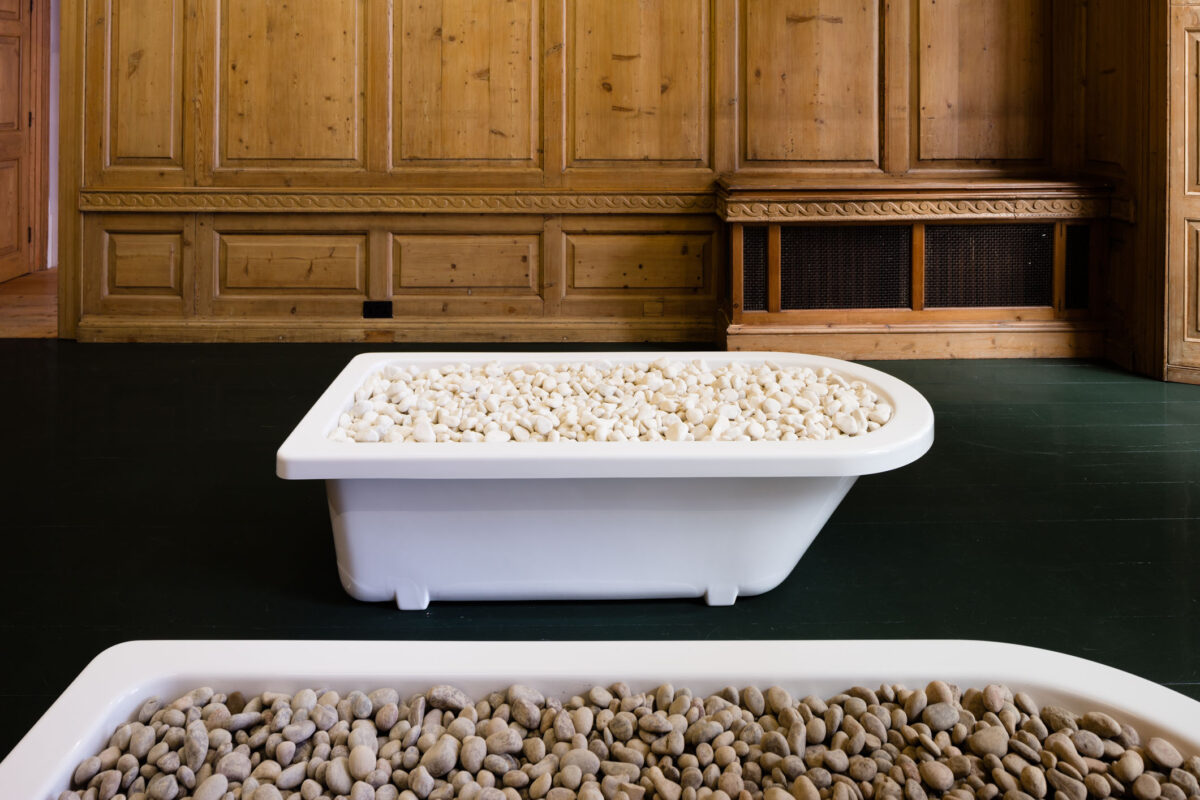 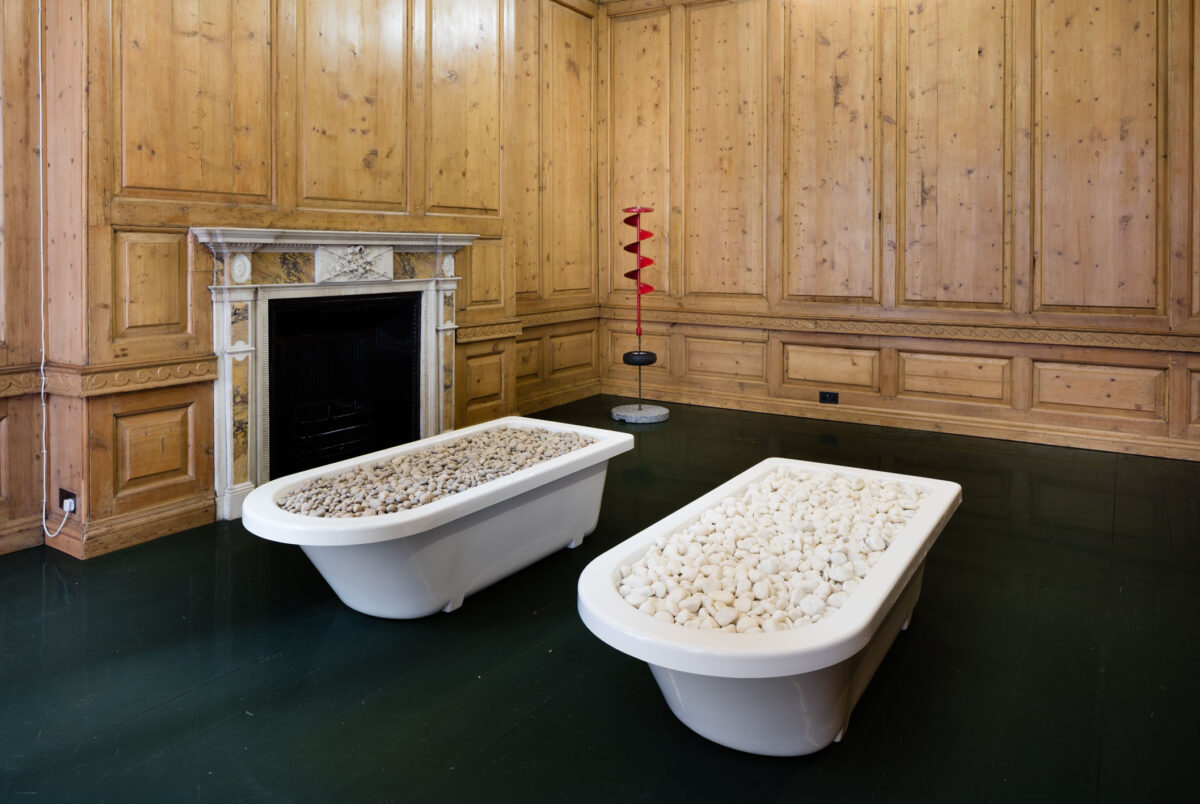 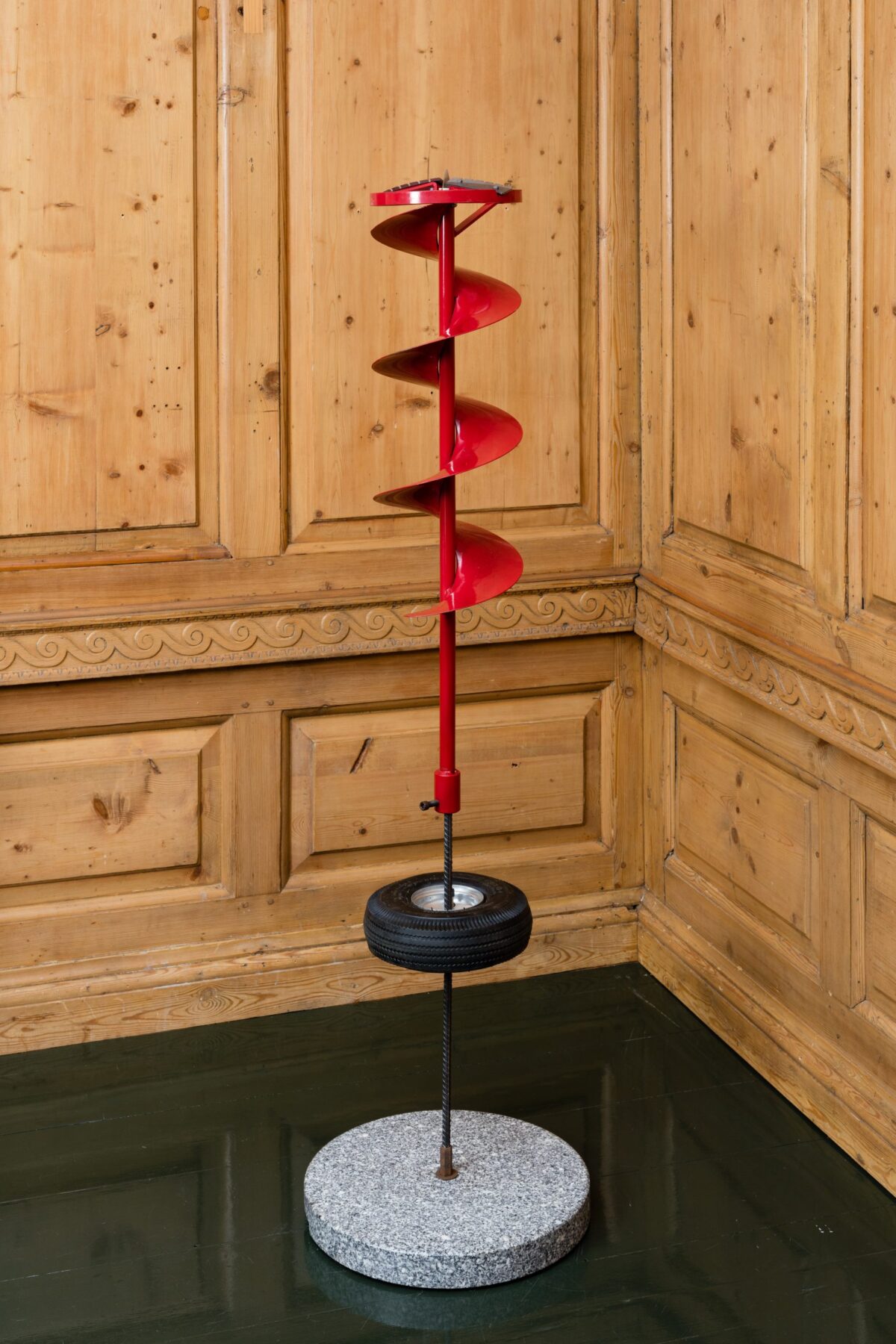 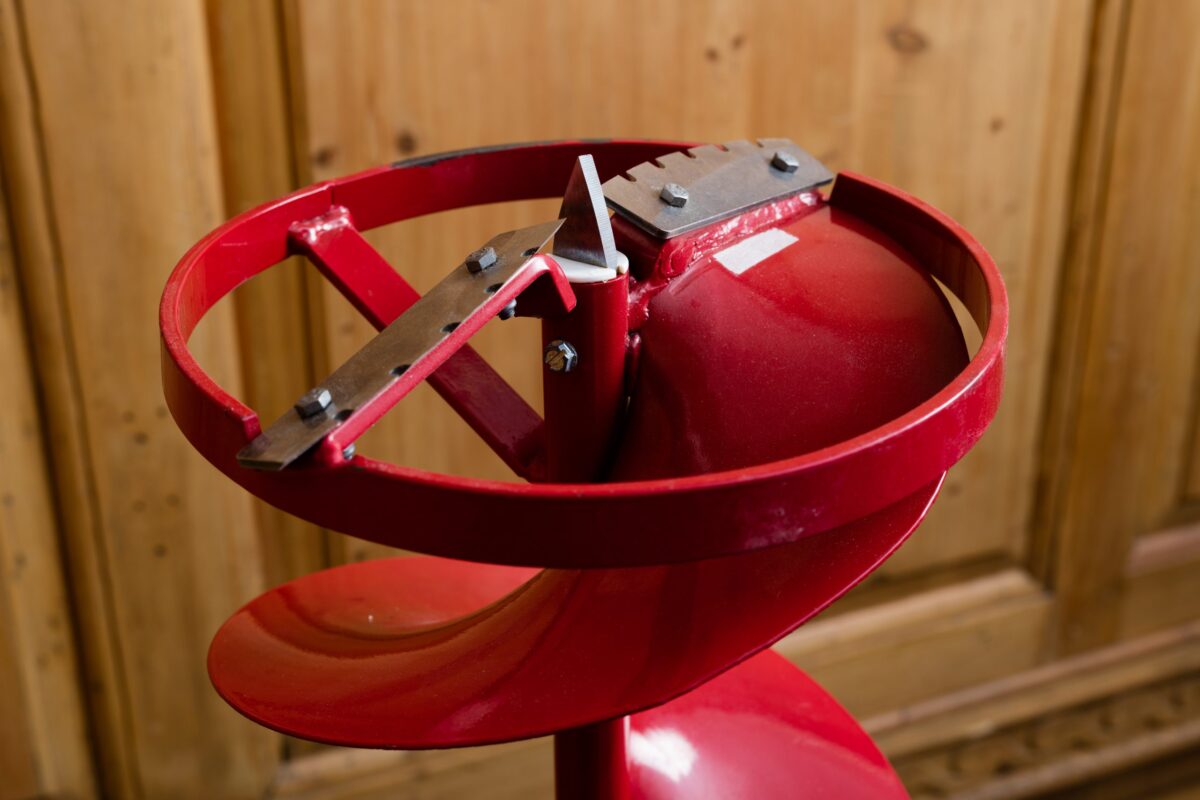 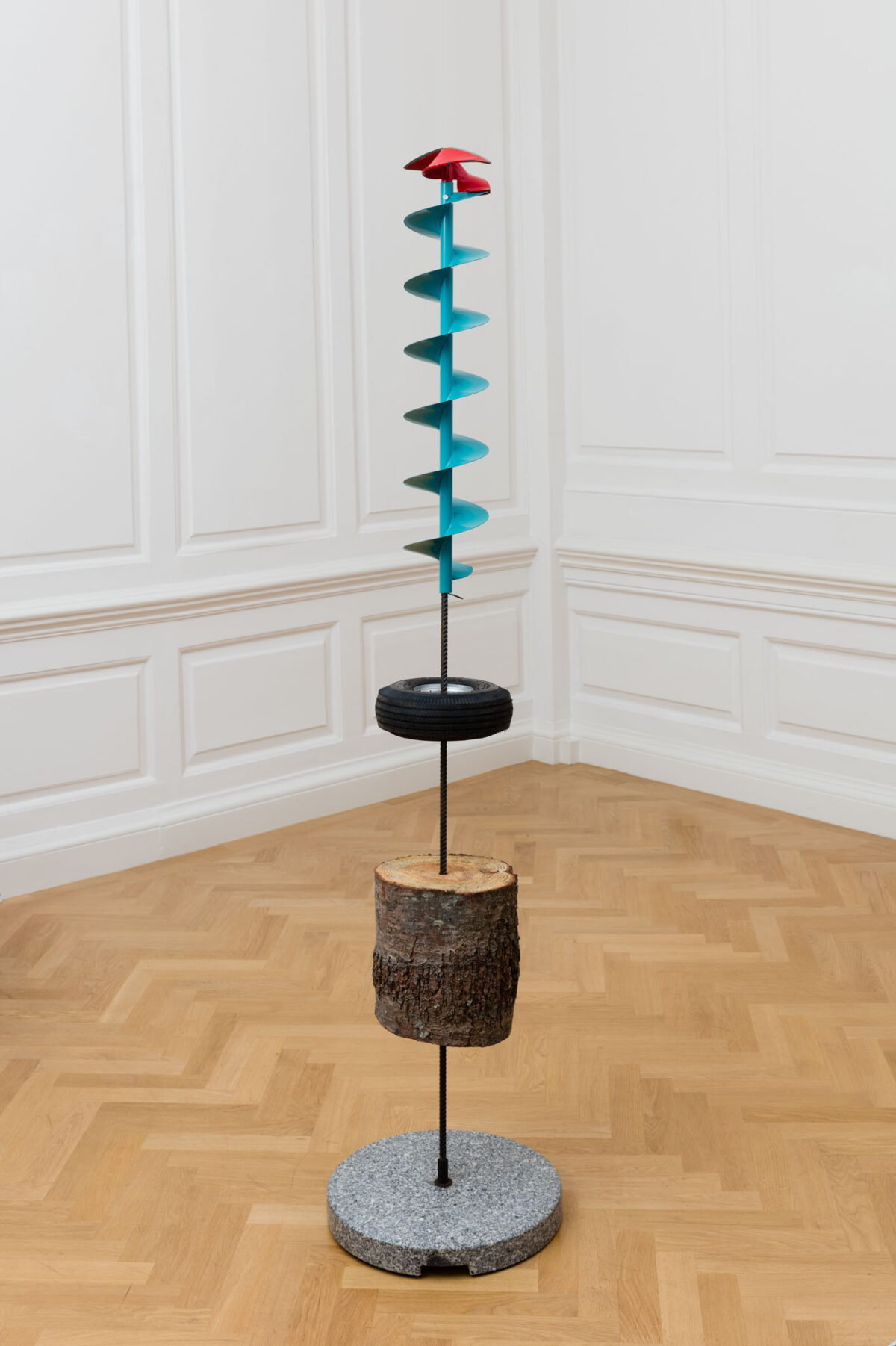 Charles Harlan is a New York based sculptor, born in 1984 in Georgia, USA and this will be his first solo show in the UK where he will be taking over the two main spaces of Carl Kostyál’s London gallery. Harlan uses found or industrial materials such as stones, bricks, wire fencing or, in the case of this show, old iron baths. He has had solo shows in New York (including JTT, Karma and Venus Over Manhattan) and Belgium (Rodolphe Janssen) and has been in too many group shows to list here, but they include locations such as David Zwirner, NY, Atlanta Contemporary Art Centre, Martos Gallery (curated by Bob Nickas), Socrates Sculpture Park (curated by Hans Ulich Obrist) and Maccarone, NY.

There is a word that comes up in a conversation between Charles Harlan and Carol Bove (published in Flash Art, Jan 2016) that I had to look up, the word was koan.

noun…a paradoxical anecdote or riddle without a solution, used in Zen Buddhism to demonstrate the inadequacy of logical reasoning and provoke enlightenment.

My favorite koans are the ones that end with some poor monk getting slapped. Because so much of Zen relies on negating learned understanding, we have to ask the master what is left after everything has been negated. The master replies with a slap, which is neither affirmation or negation, but pure experience and pure understanding. The slap is a way to break through mediated experience into enlightenment, which seems like a good aspiration for art making.

There are two ways I think of looking at the work of Charles Harlan, one is as a sculptor from a certain lineage, the works are often large, heavy, simple and at times brutal; four closed garage doors forming a monochromatic cube in field. A wire fence that has had a tree grow through it over years, literally cut from where it grew and placed in a gallery. A huge metal tube, and nothing else, filling an entire gallery space on the Lower East Side. The work looks beautiful, thoughtful, physical and, in a way timeless.

Harlan also has another, side, one that the viewer can either engage with or not, the stories, ideas, connections and journeys that form the DNA of the finished works.

The current show for example grows from an interest in the obelisk-dome duality found in architecture, think of towers and church domes in the same city square, found in every city from Rome to London to Washington DC.

The obelisk, with its obviously phallic form, is associated with ancient Egypt, while the womblike dome is from ancient Rome.

Essentially, in some of the most important places all over the world, from the Vatican to D.C. is an architectural innuendo that suggests [sex]… the deeper meaning, beyond the crass juxtaposition of the two forms, is the alchemical idea of transmutation. The idea is that these monuments create a sort of divine hermaphrodite vibe on a mass scale, reconciling polarities.

Which brings me back to the slap in the koan I guess.