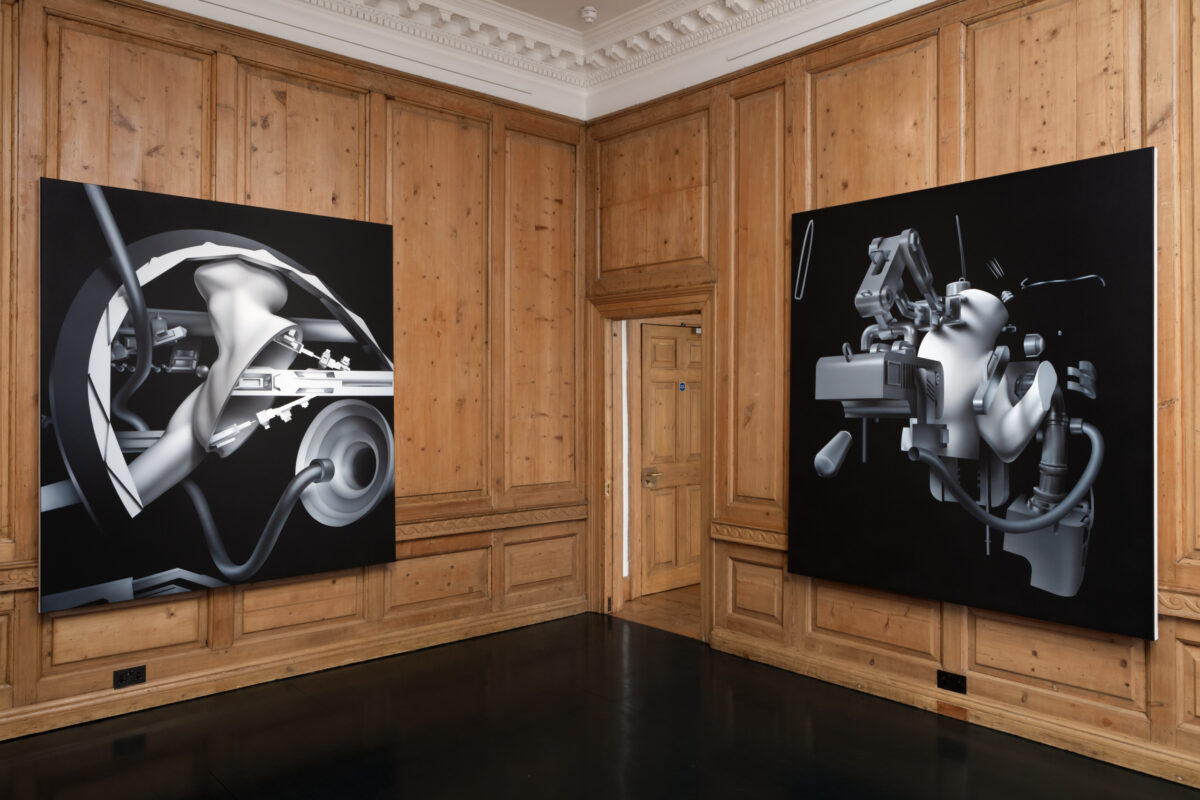 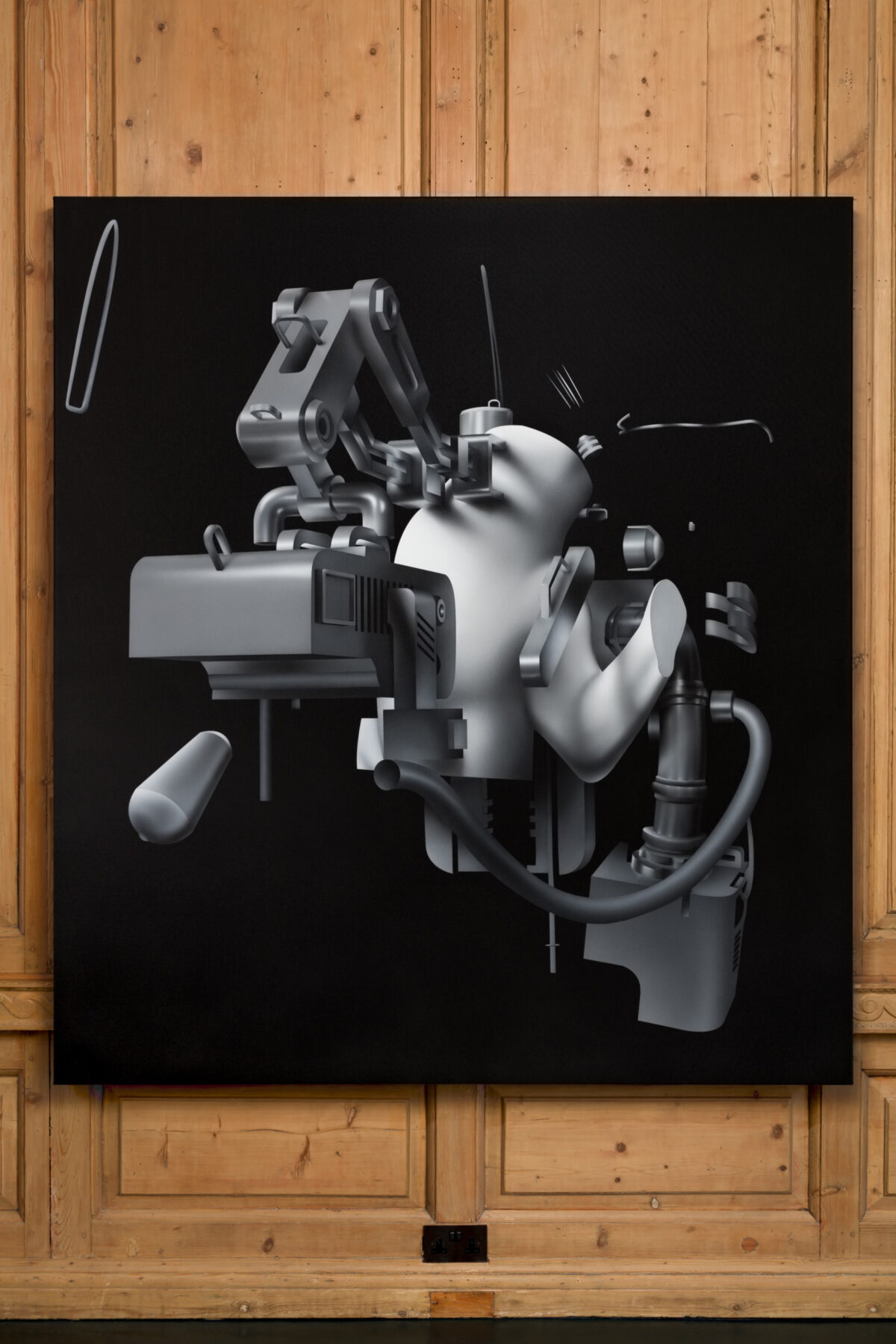 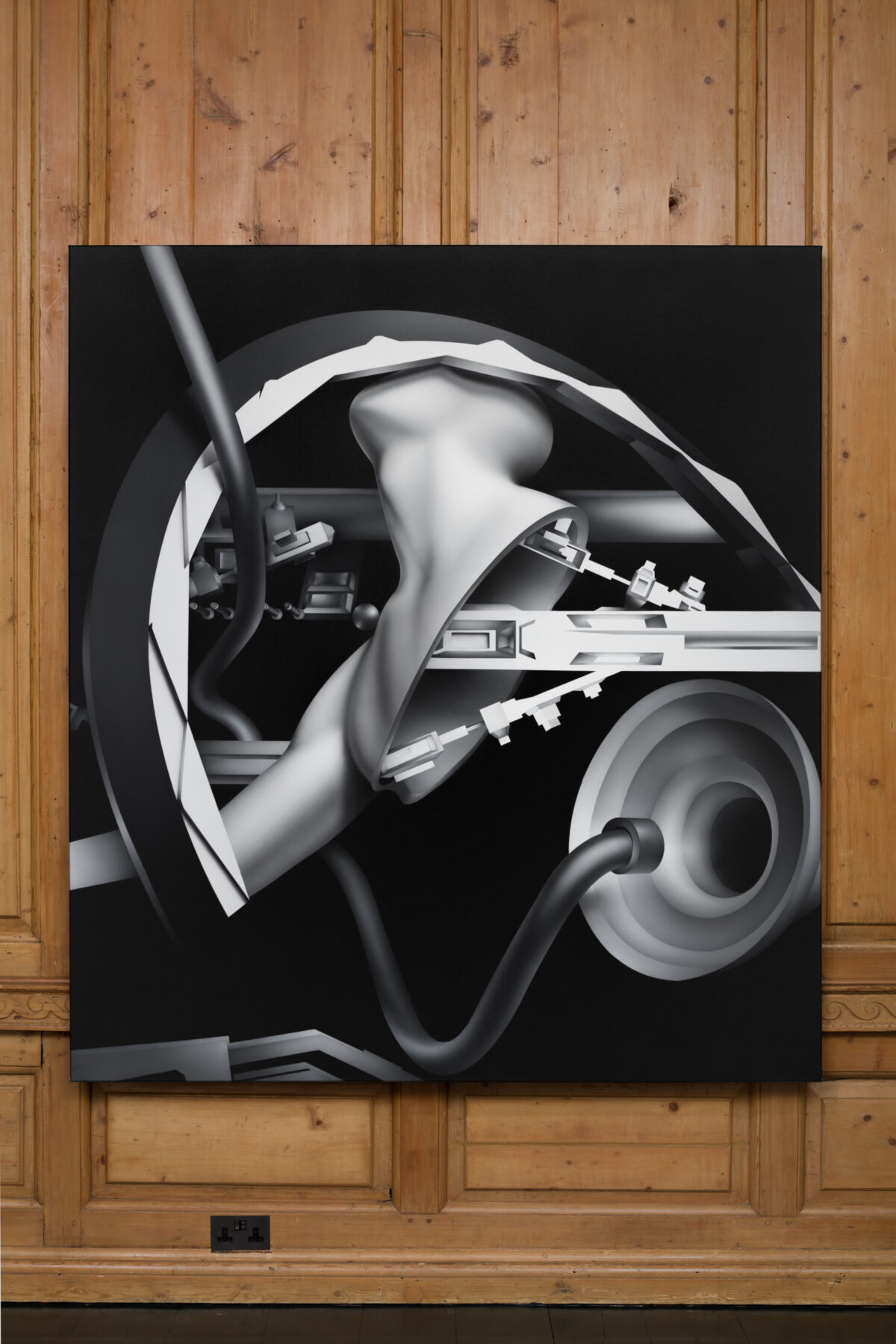 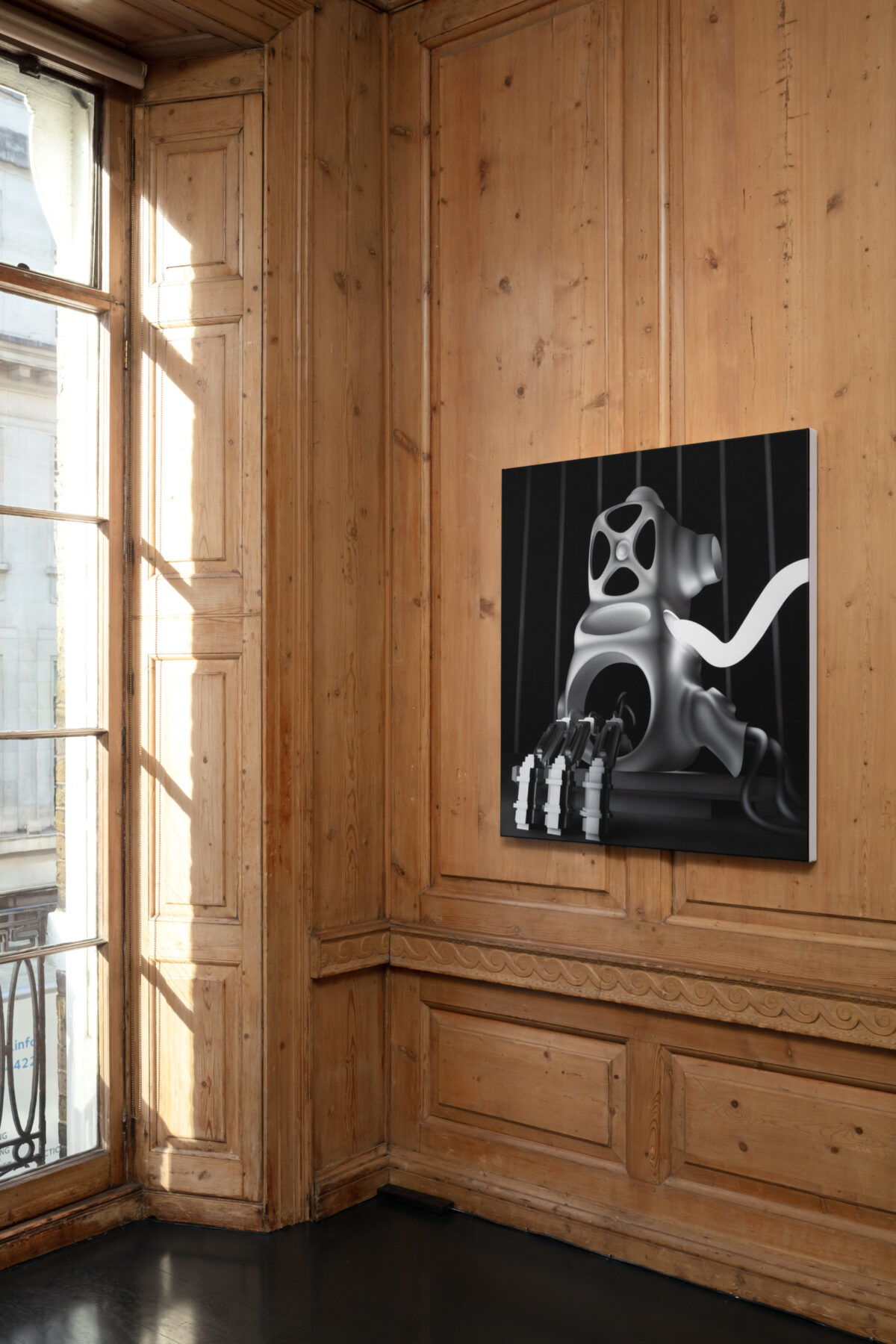 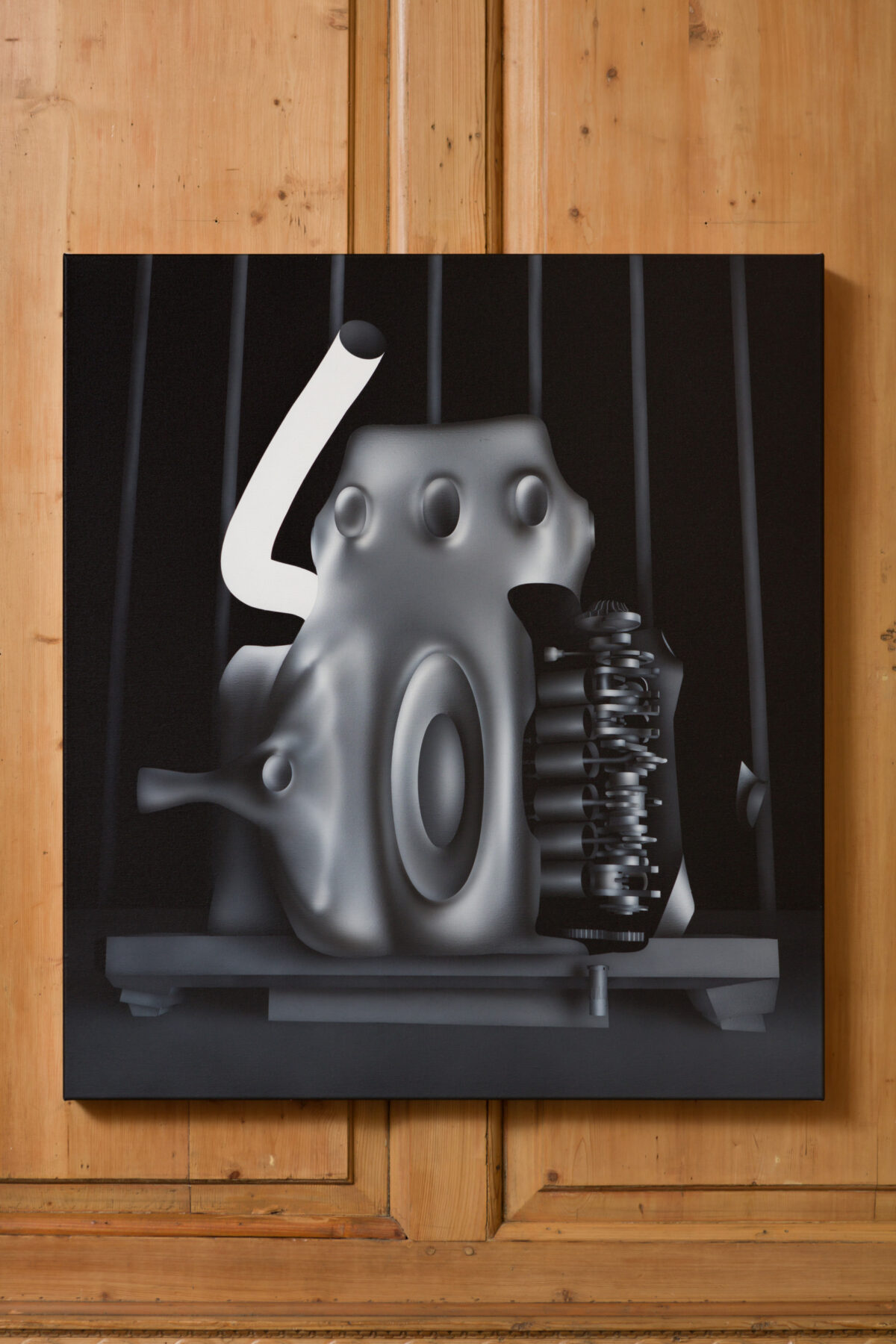 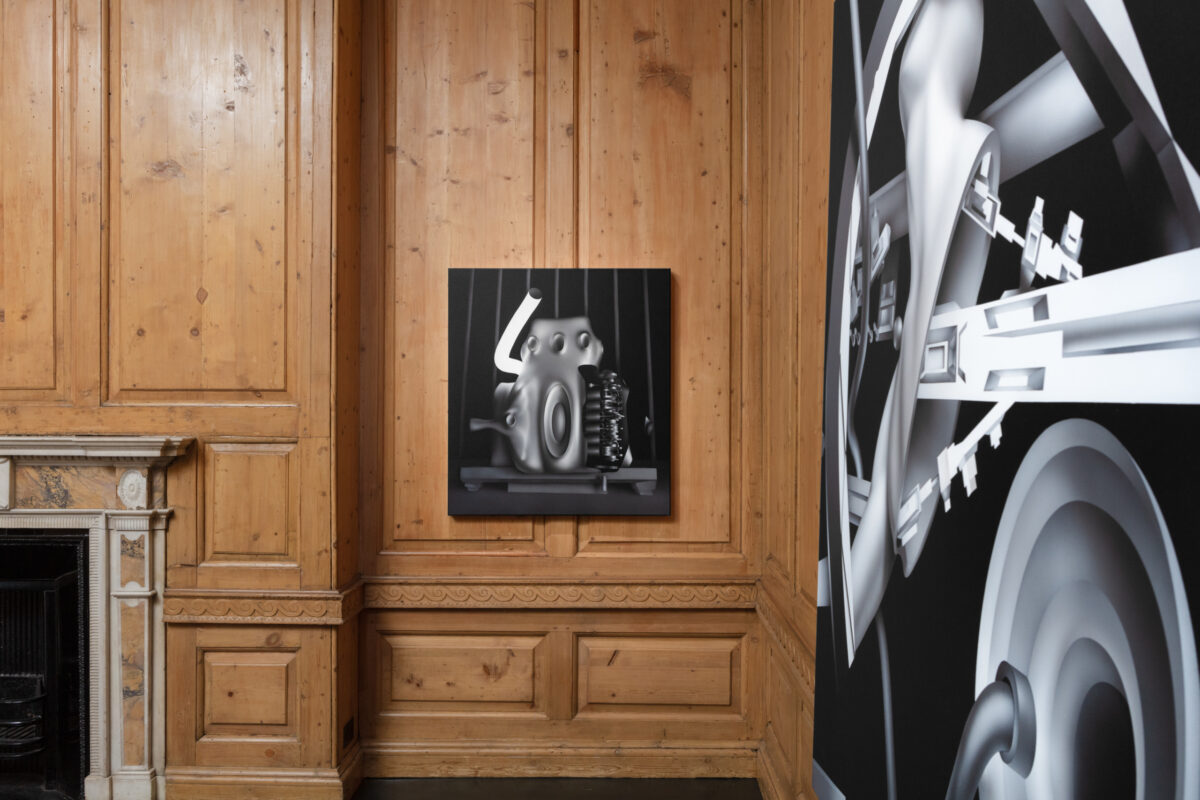 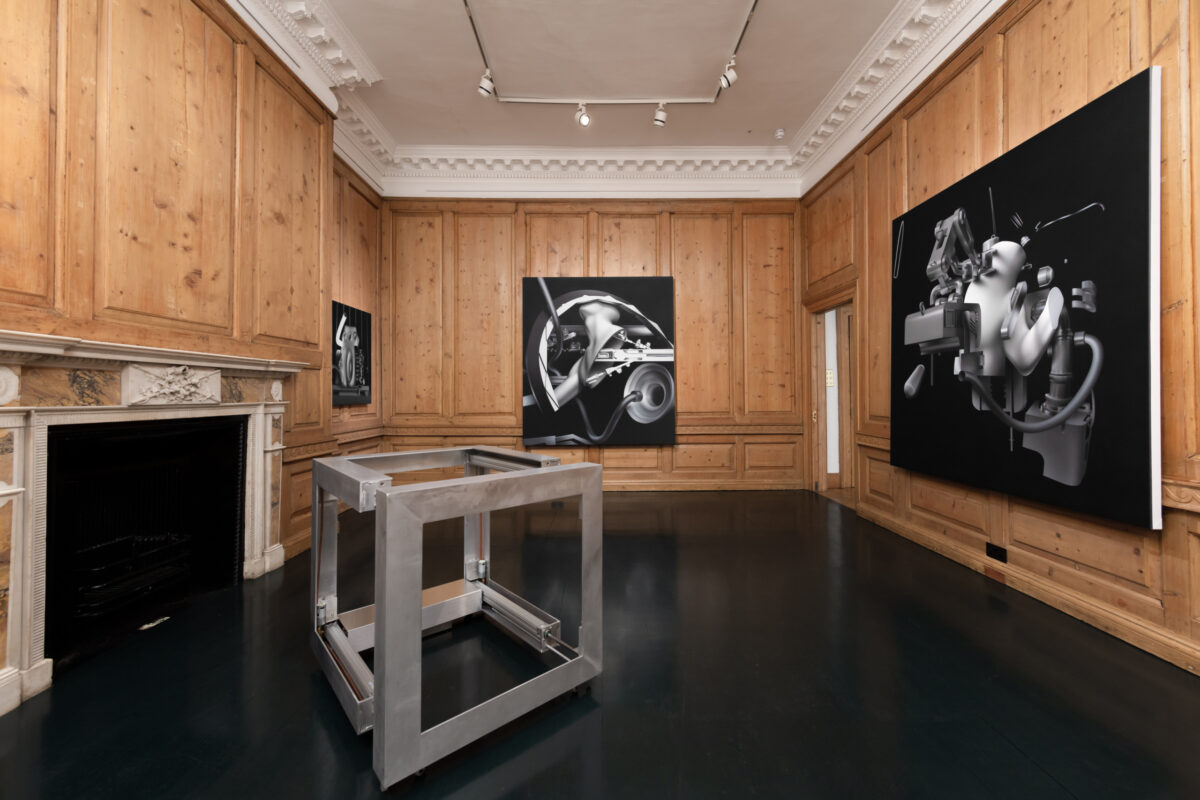 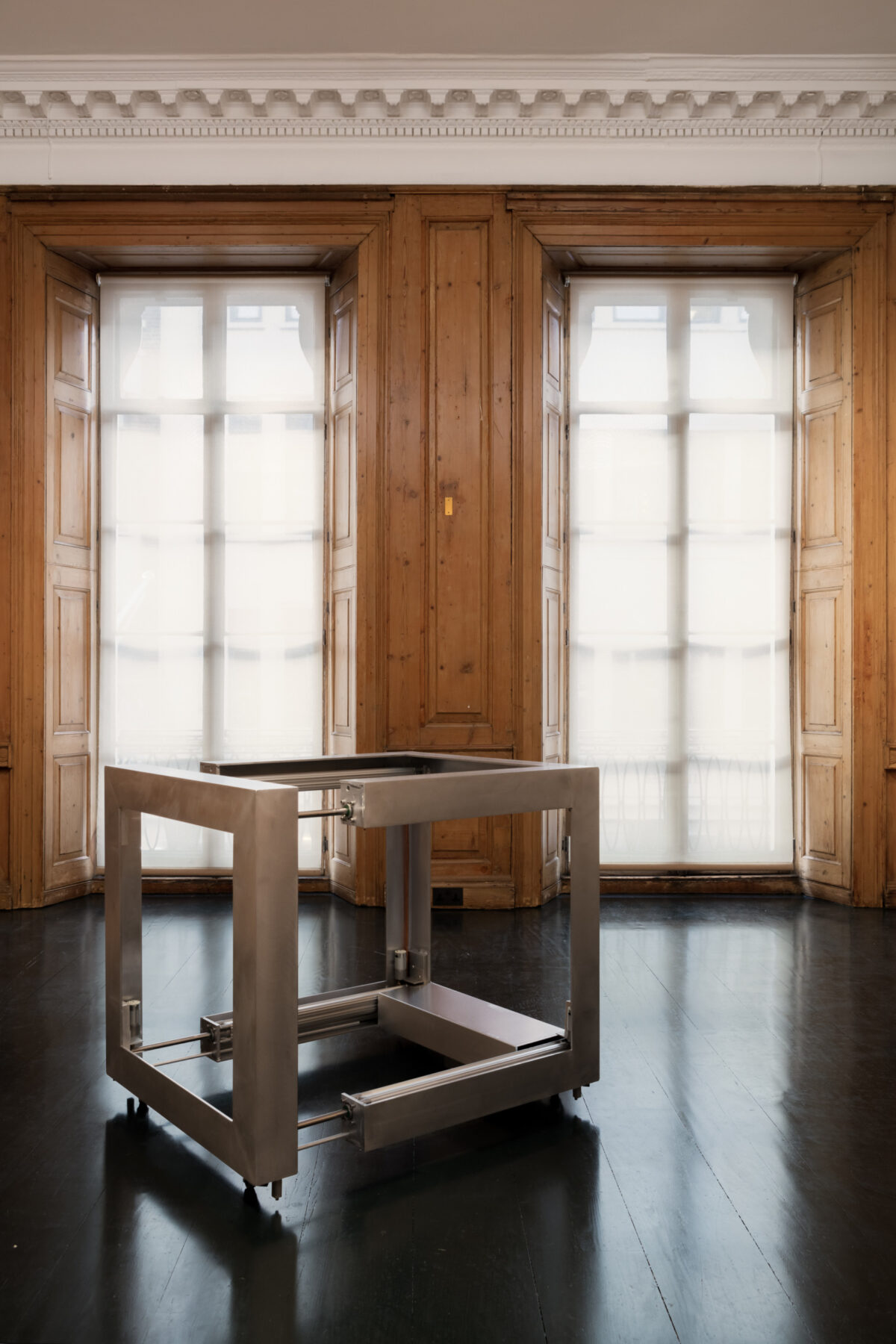 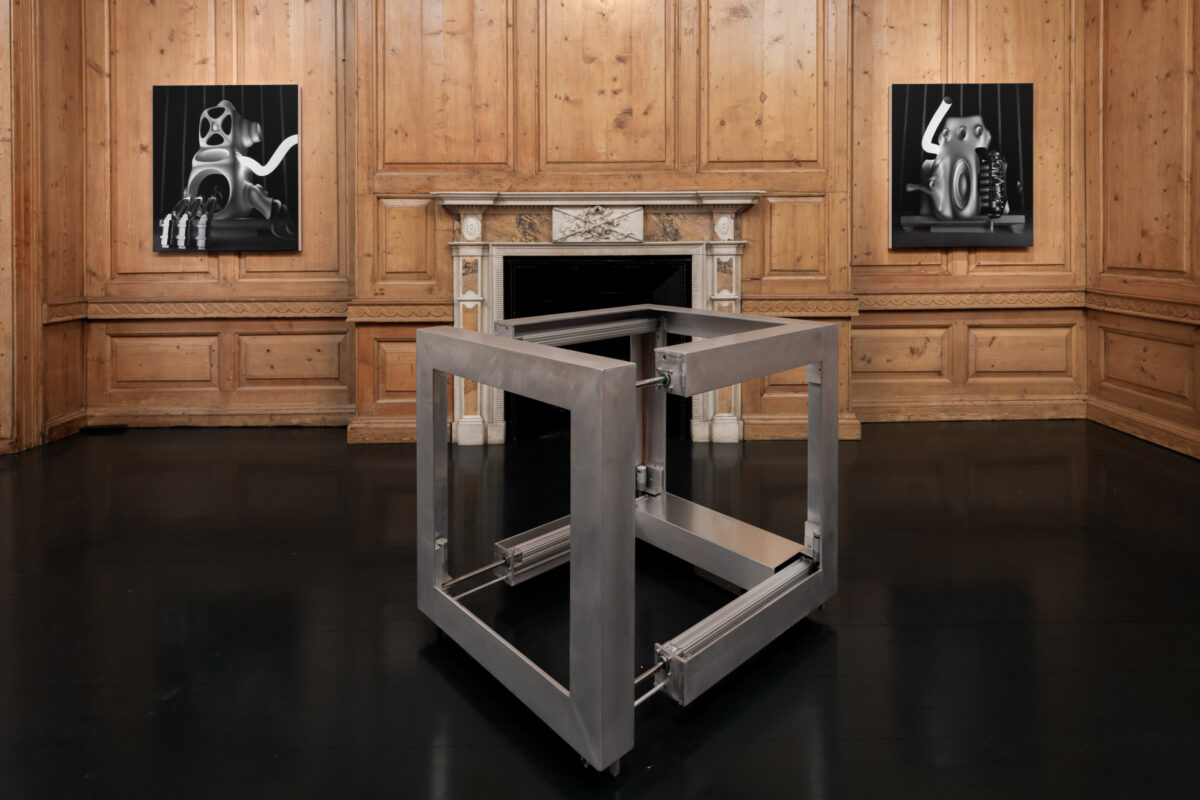 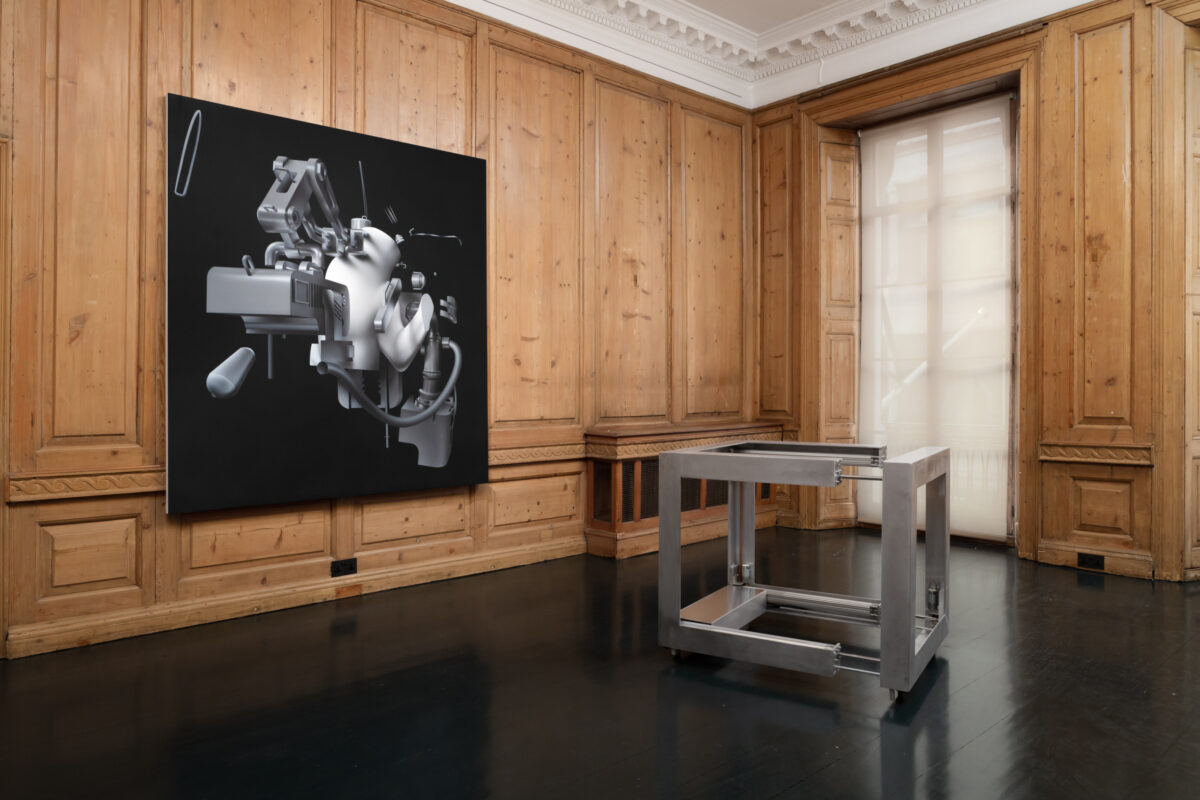 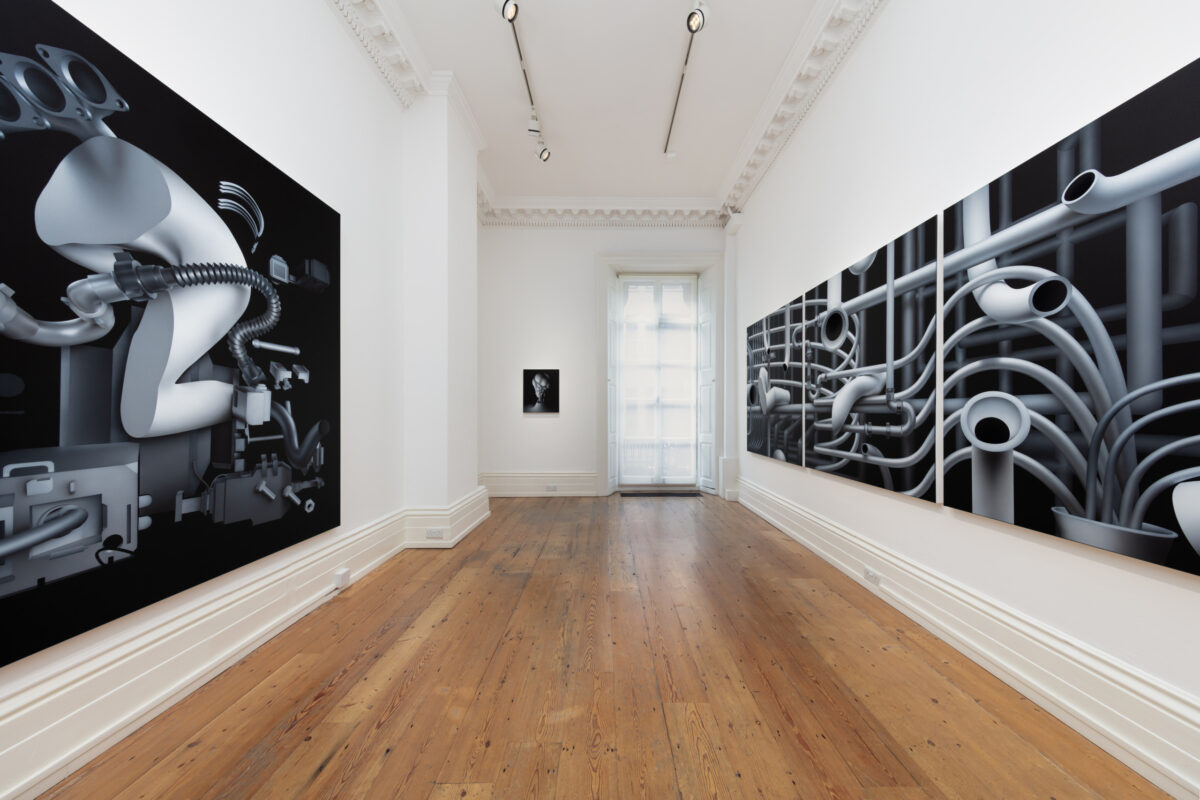 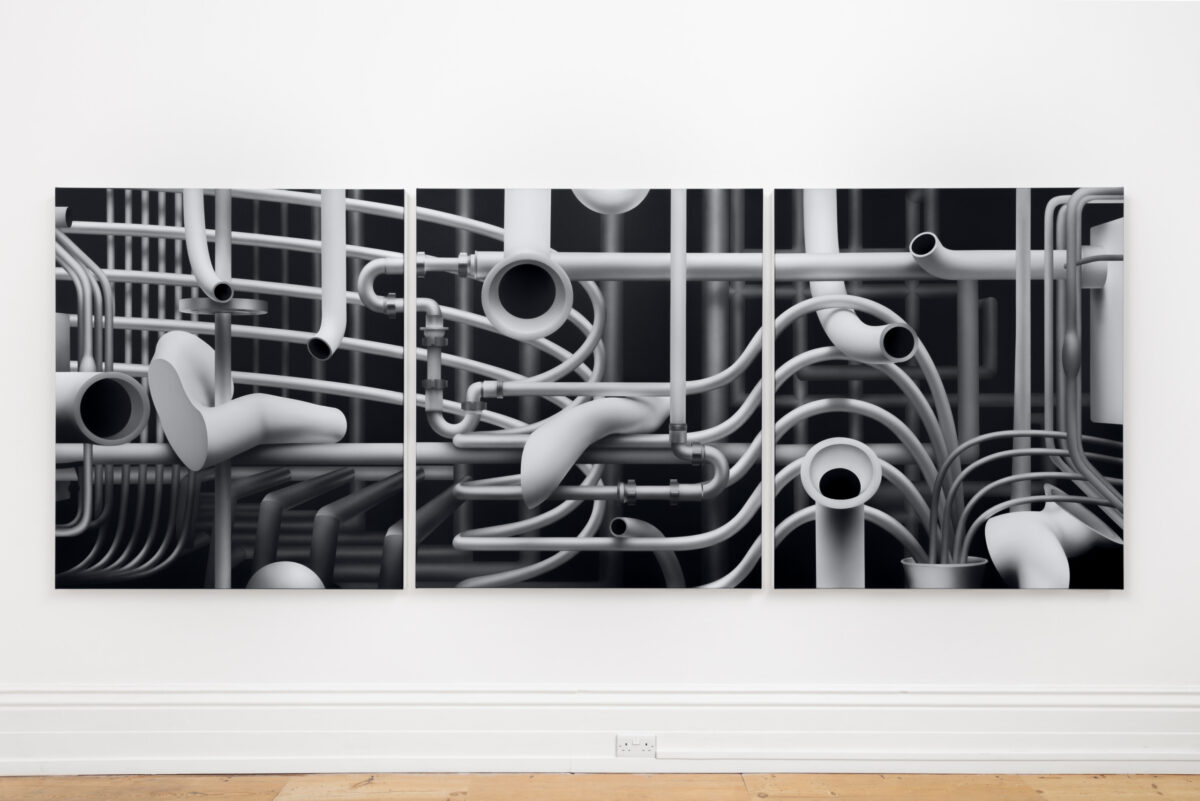 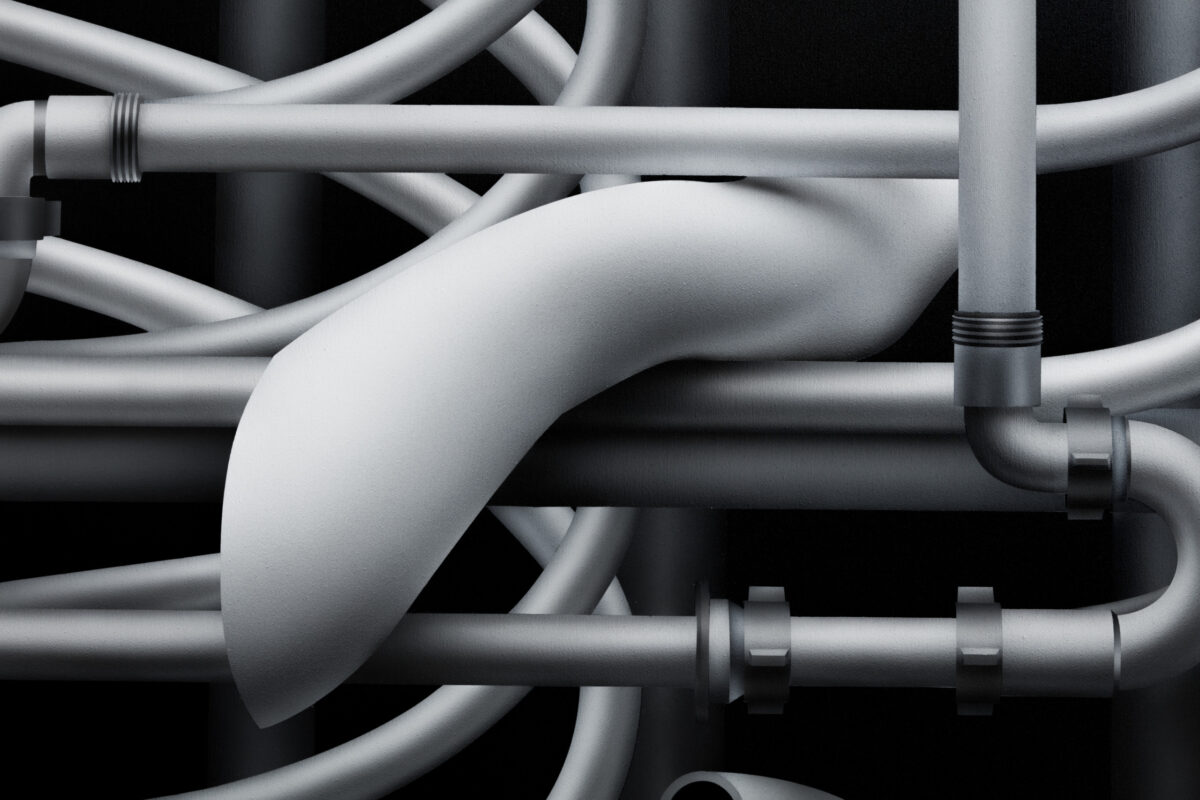 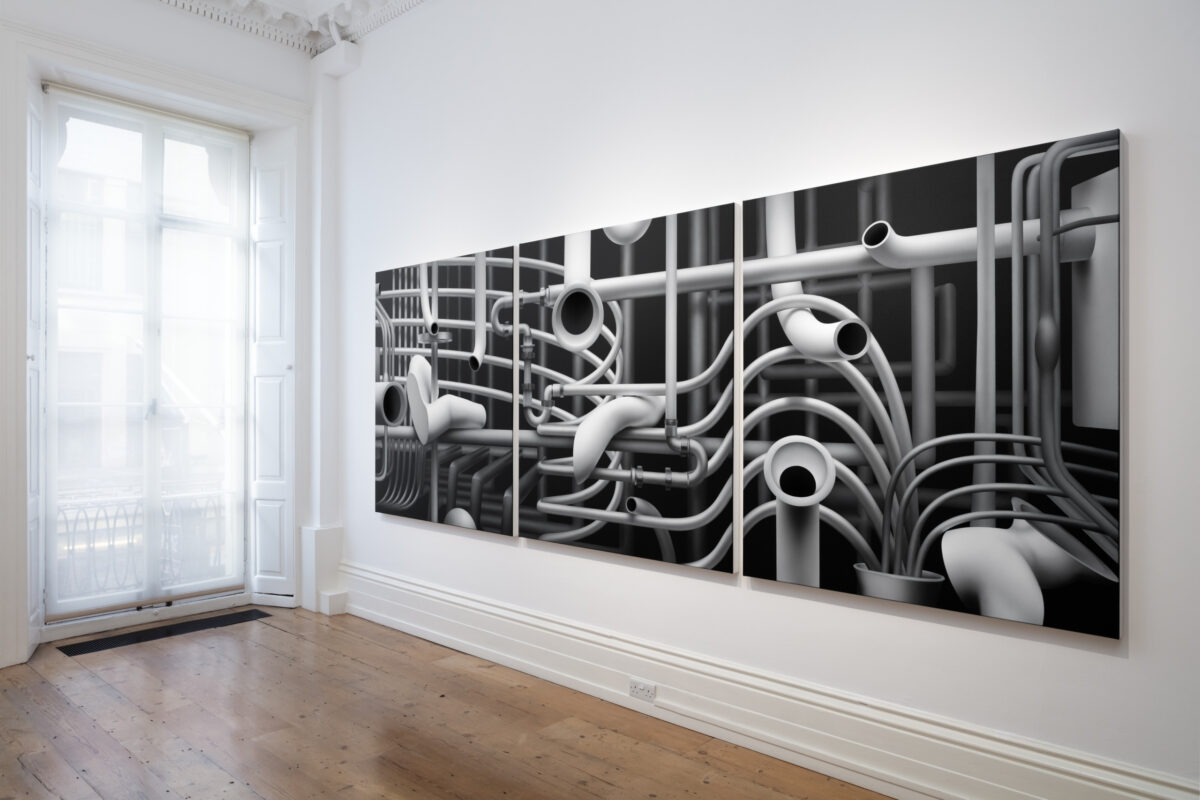 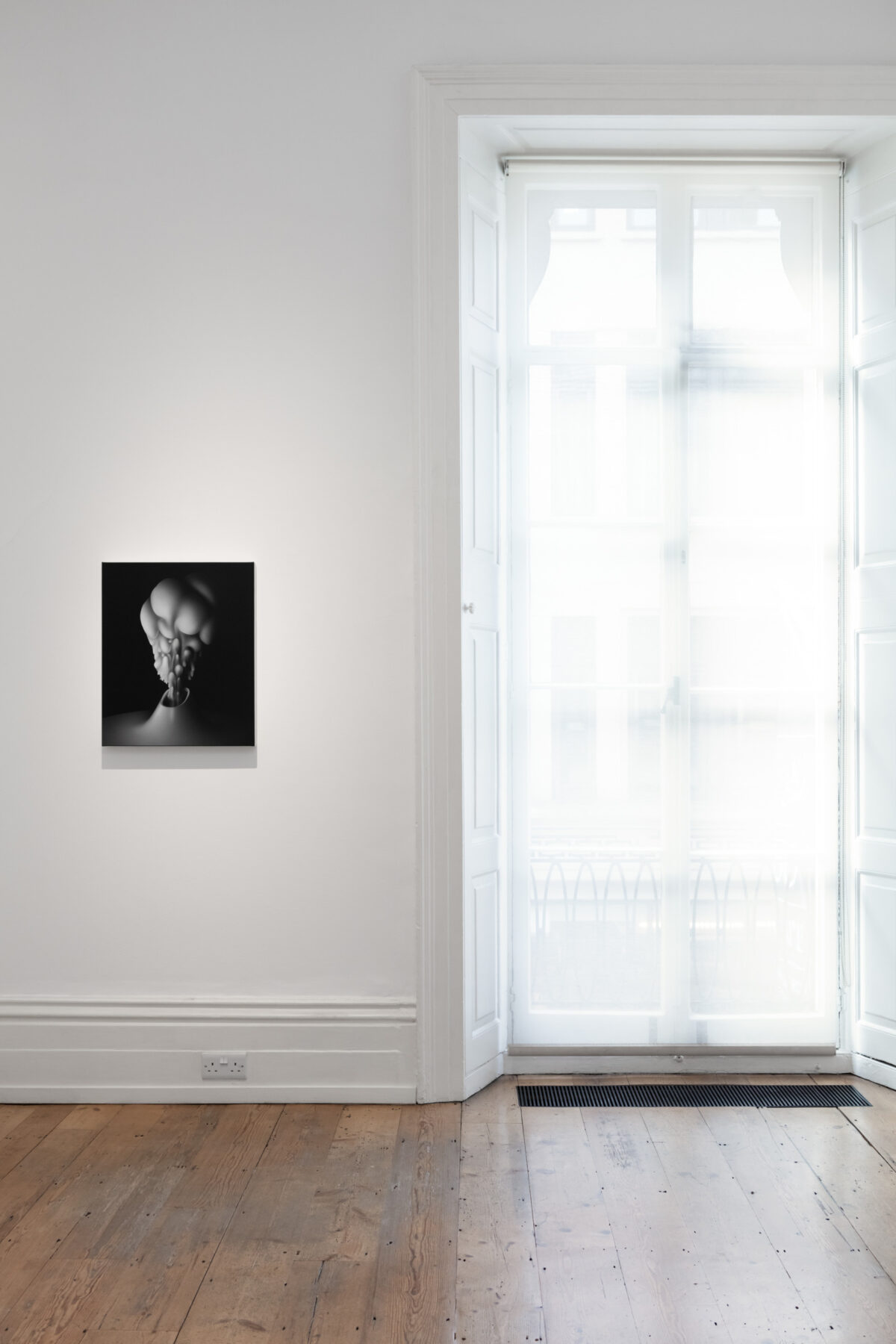 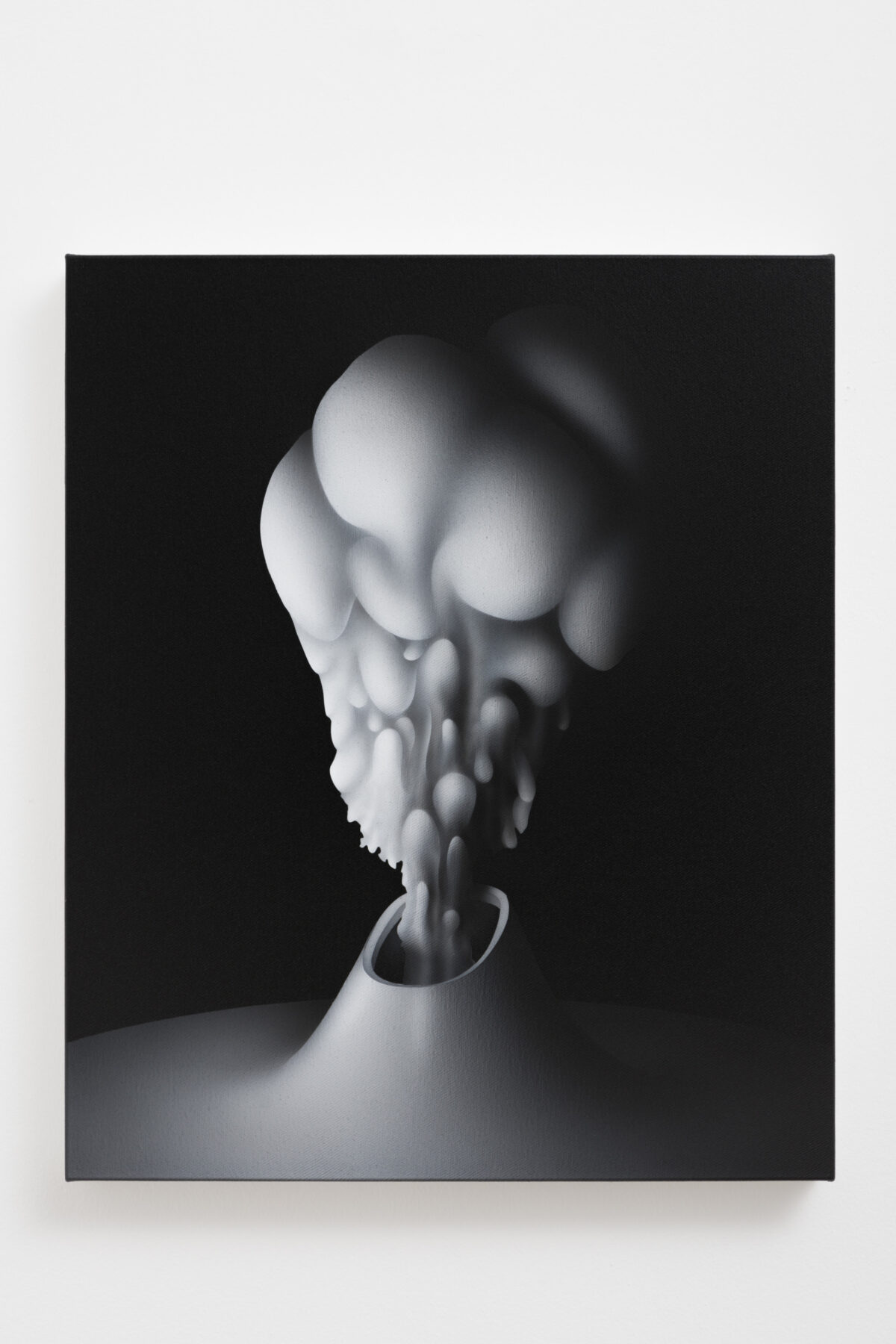 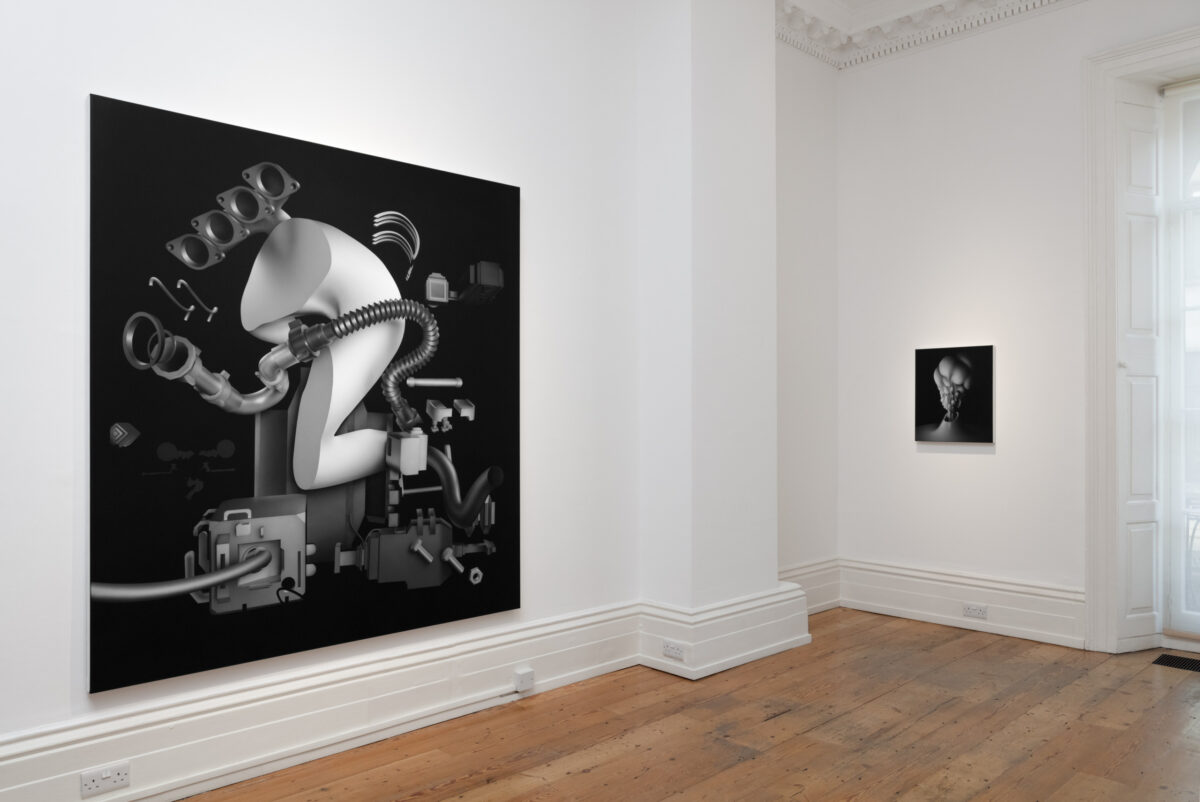 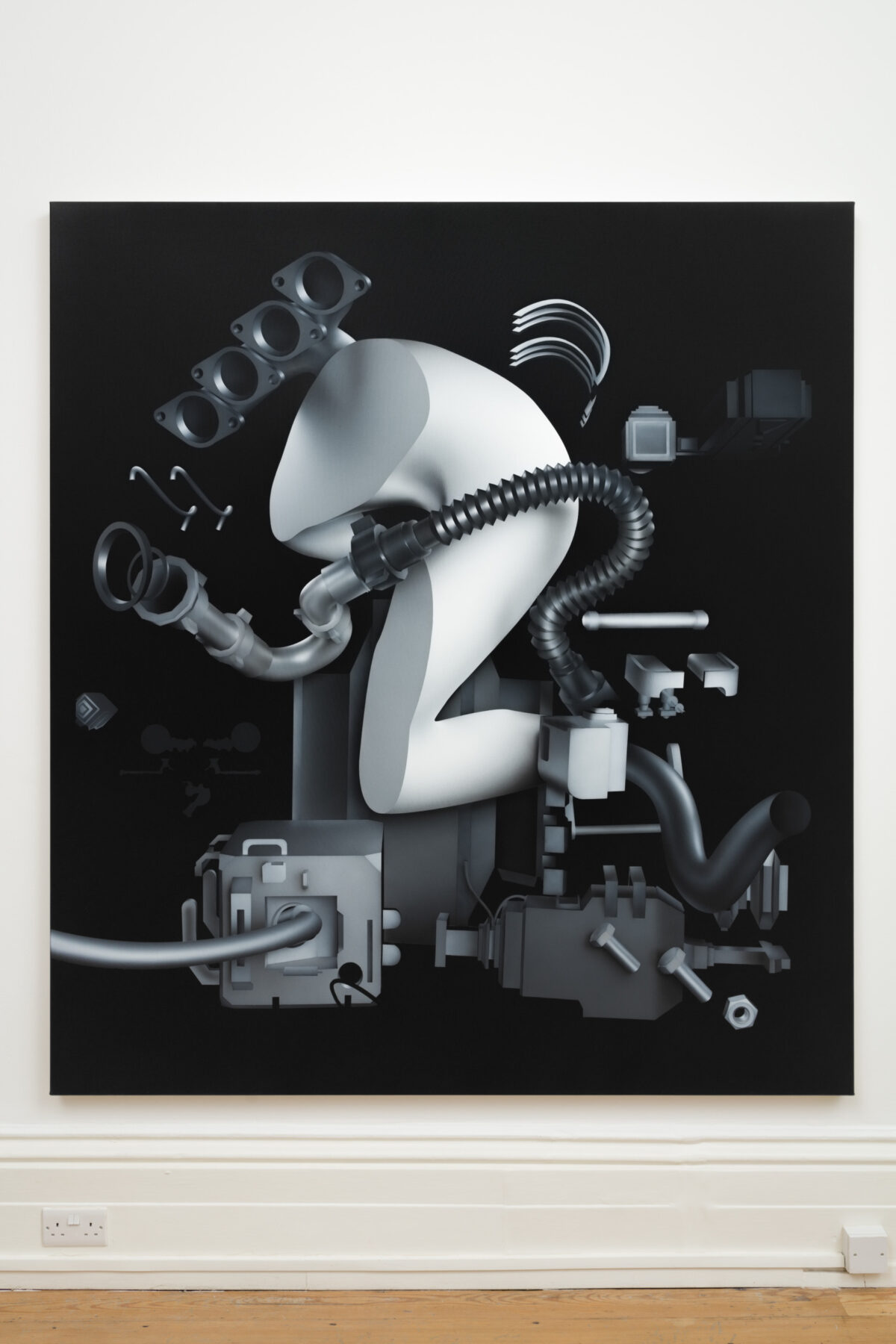 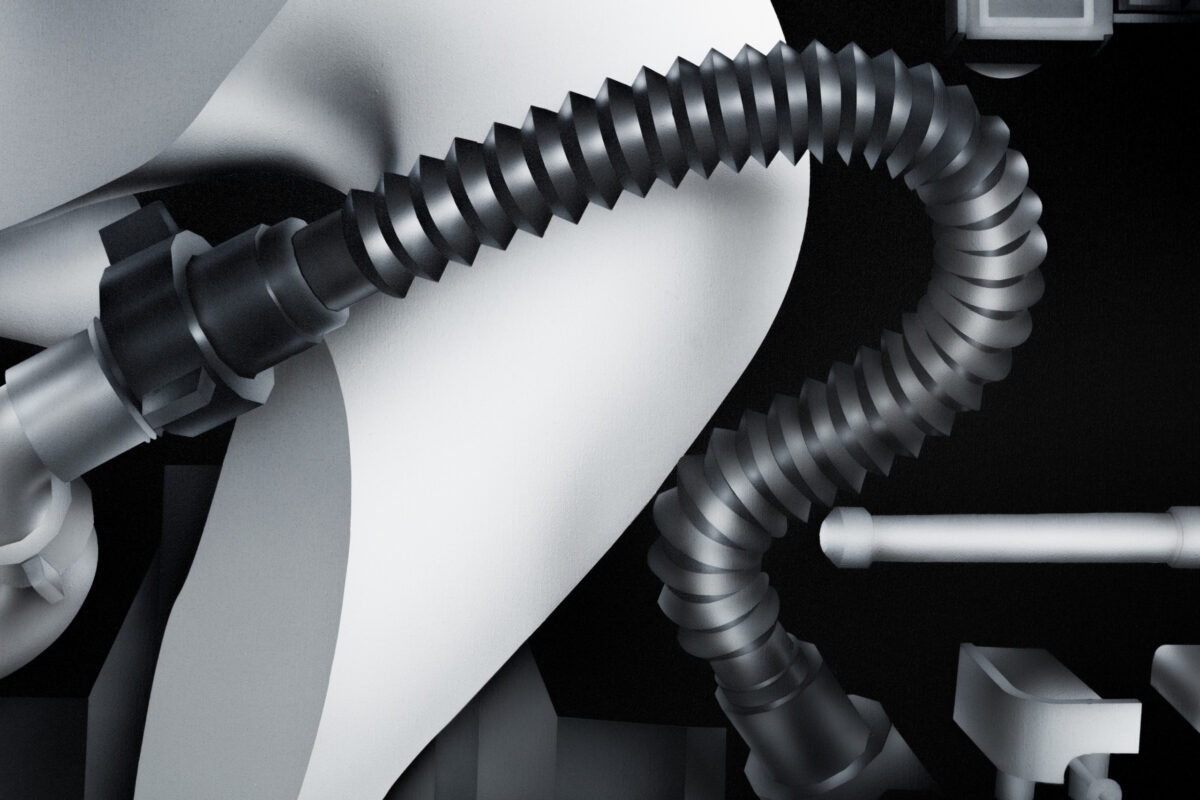 “The centre will not hold”

For his debut show ‘HOST’ at Carl Kostyál, London-based artist Harrison Pearce (b. 1986) has made a series of new black and white paintings and a kinetic sculpture.The exhibition takes its title from composer Thomas Stone’s earlier work of the same name, made in response to his horror at how parasitic bacteria can affect the behaviour of their host and how that same process can occur with parasitic ideas which inveigle their way into the host’s mind and from there, spread.

The works in this exhibition refer to a departure from the artist’s formerly unwavering belief in empirical knowledge (he holds a Masters in analytic philosophy) and, for him, its greatest test: at the age of 28, a series of brain scans revealed an anomaly in the morphology of his brain. Asymptomatic, he had no way to assimilate the idea that his body was playing host to a potentially fatal malfunction. The question of mind-body dualism was never so prescient. Cogito, ergo sum. How was his mind (an immaterial substance engaged in rational thought, imagining, feeling, sensation) separated from his brain (a physical mechanism), if at all, and who or what was the ‘I’ he was so determined to save? It transpired later that while the anomaly was real, the diagnosis was flawed.

That his fate had rested in a fallible reading of data led him to scrutinise systems of codification and measurement in multiple contexts, far beyond the Promethean arrogance and clinical sterility of medical science, to better comprehend the level of approximation and porousness at the heart of all human forms of analysis in which we nevertheless place such faith: how the cloudy space of first generation X-rays had to be codified before it could be decoded to reveal change; how, in Chaos theory, when the calculation is too big to compute automatically, human intuition is considered superior; how translation from one language to another is inevitably characterised by a level of indeterminacy, and so on.

Similar perhaps to Mel Bochner’s early 1960s installations, where readymade systems of measurement and language and their limited ability to explain and describe an object were put to the test, Pearce’s ongoing exploration of the mechanics of measurement and affect, using the grammar of painting and sculpture as his vehicle, poses many open-ended propositions. It is possible he shares a similar aim to Bochner, whose intention was that “art could go from being the record of someone else’s perception to becoming the recognition of your own.”

The paintings, a riposte to his own sculpture practice, nod to the violent tangle of limbs of so much historical sculpture, such as Bernini’s Rape of Proserpina (‘Ghost’, ‘Long Phrase I II & III’, ‘Siphon’ and ‘Forebear’), the off-white severed simalcrums of body parts variously squeezed, trapped, constrained or contained in a convoluted and threatening web of sleek tubes and mechanical, occasionally Cyborg-esque, apparatus (‘Sentinel A’ & ‘Sentinel B’) that seem to hover in their own space-time continuum. Their ghostly monochrome hue, borrowed from the shadowy imaging of the MRI scans of his own brain, is deliberate, black and white necessarily revealing less information and therefore obfuscating, rather than offering any certainty of understanding. The stark lighting effects and omnipresent sense of existential crisis are reminiscent of film noir, even of a creeping Surrealism.

If these paintings, each framing its own central subject, are an open sketchbook of impossible, fantastical ideas, the sculptural element of the exhibition, the kinetic object ‘Stateless’, is a frame with its ‘figurative’ subject removed. An empty metal cube mounted on wheels, it is programmed with data that propel its movement in a physical demonstration of “Buridan’s Ass”, the paradox of moral determinism discussed first by Aristotle and later explored by the French 14th century philosopher Jean Buridan. It refers to a hypothetical situation wherein a mule that is equally hungry and thirsty is placed precisely midway between a stack of hay and a pail of water. Since the paradox assumes the animal will always go to whichever is closer, it dies of both hunger and thirst since it cannot make any rational choice between the hay and water.

The mechanical sculpture is programmed with data that determine its movement. It is capable of several limited physical functions, which can coincide to let it move around the gallery floor. Yet it is in a near constant crisis of metastability, unable to decide between two equal sets of data. In this stateless condition, it is paralysed until a random function generator within its internal clock momentarily and arbitrarily releases it from this bind. It’s stuttering paralysis lends the machine an intensely human and accidentally sympathetic aspect. Its inability to take action unlocks the parallel preoccupations of the artist; in the act of creating, indecision, and the seemingly arbitrary human response to it, reigns supreme. In making his art, the one space where a scientific methodology has diminished claim, Pearce yields to automated machine functions, taking those decisions out of his hands. The collaboration between human heuristics and machine logic make for an oscillation of human-machine co-adaptation, each alternating between the role of host and parasite, because the centre will not hold.Katharine Kostyál

Thomas Stone, the composer and musician with whose music Pearce’s ideas chime so profoundly, will perform his work ‘An Act of Surrender’ during the opening of the exhibition. Continuing his explorations into the sense of the other, of surrendering to a coercive or higher force, not necessarily religious surrender but acknowledging something ritualistic in the effort to yield, Stone has said of this work “(Surrender) isn’t a negative connotation, I was interested in whether surrender is active or passive, whether to surrender means you are consumed by this ‘higher force’ or exist within it.”