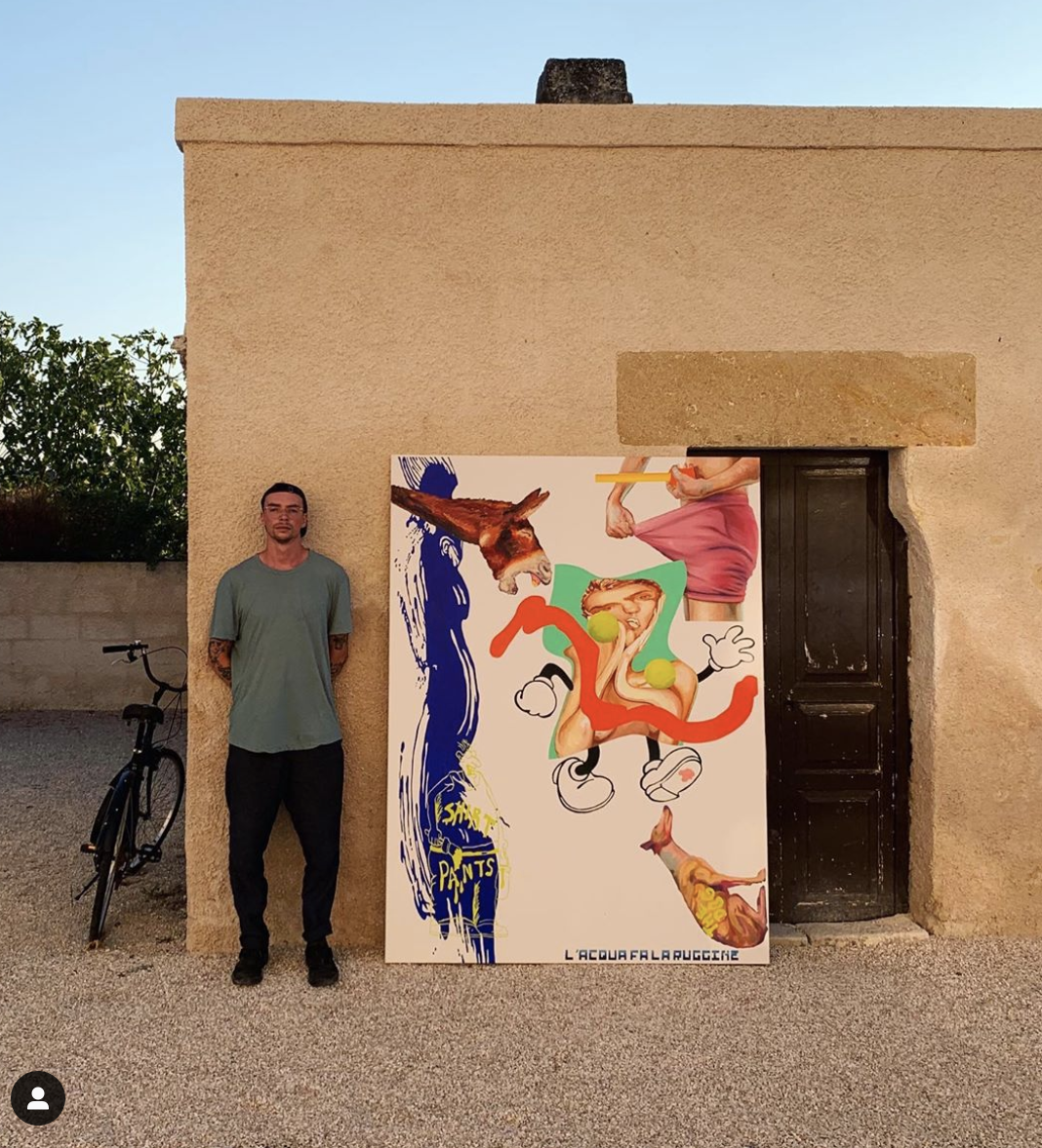 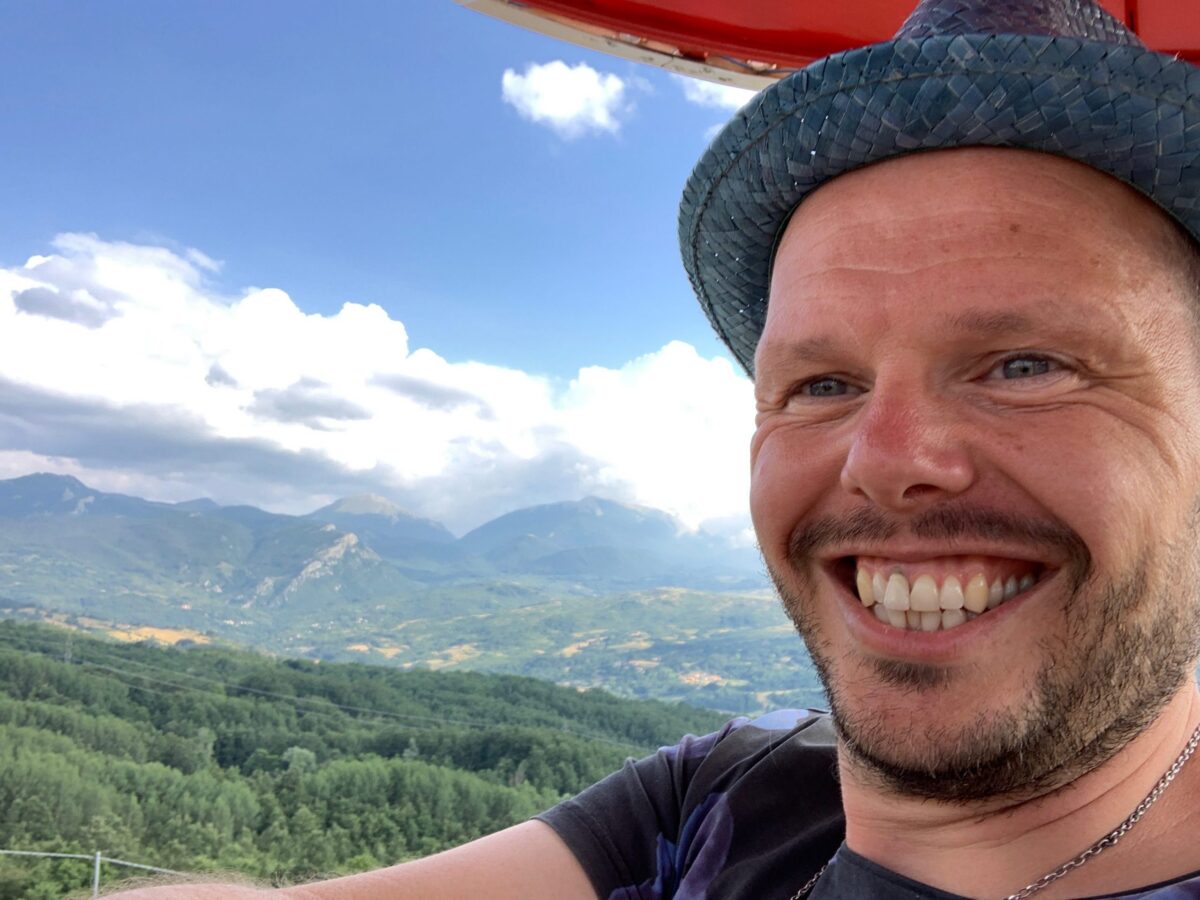 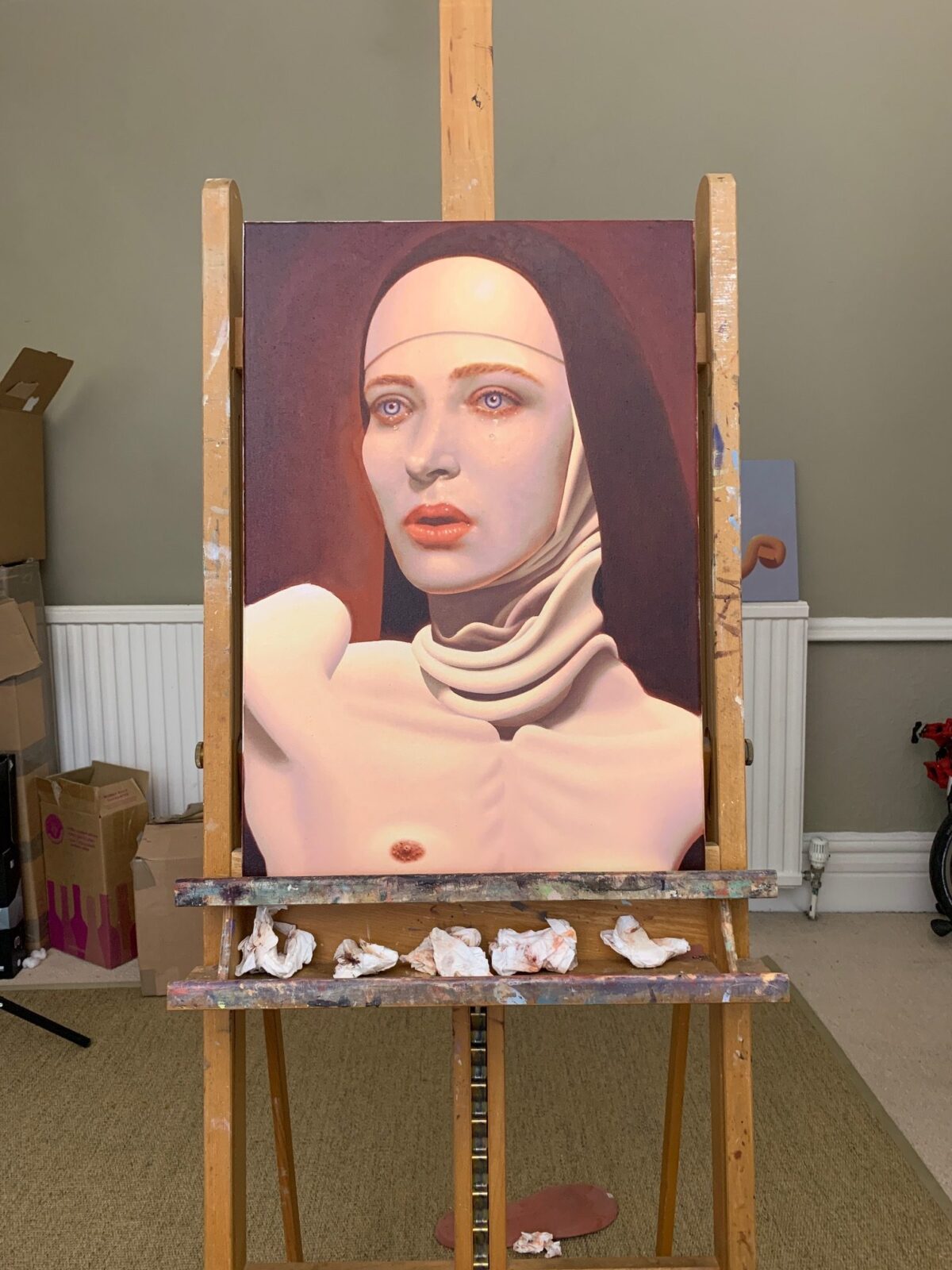 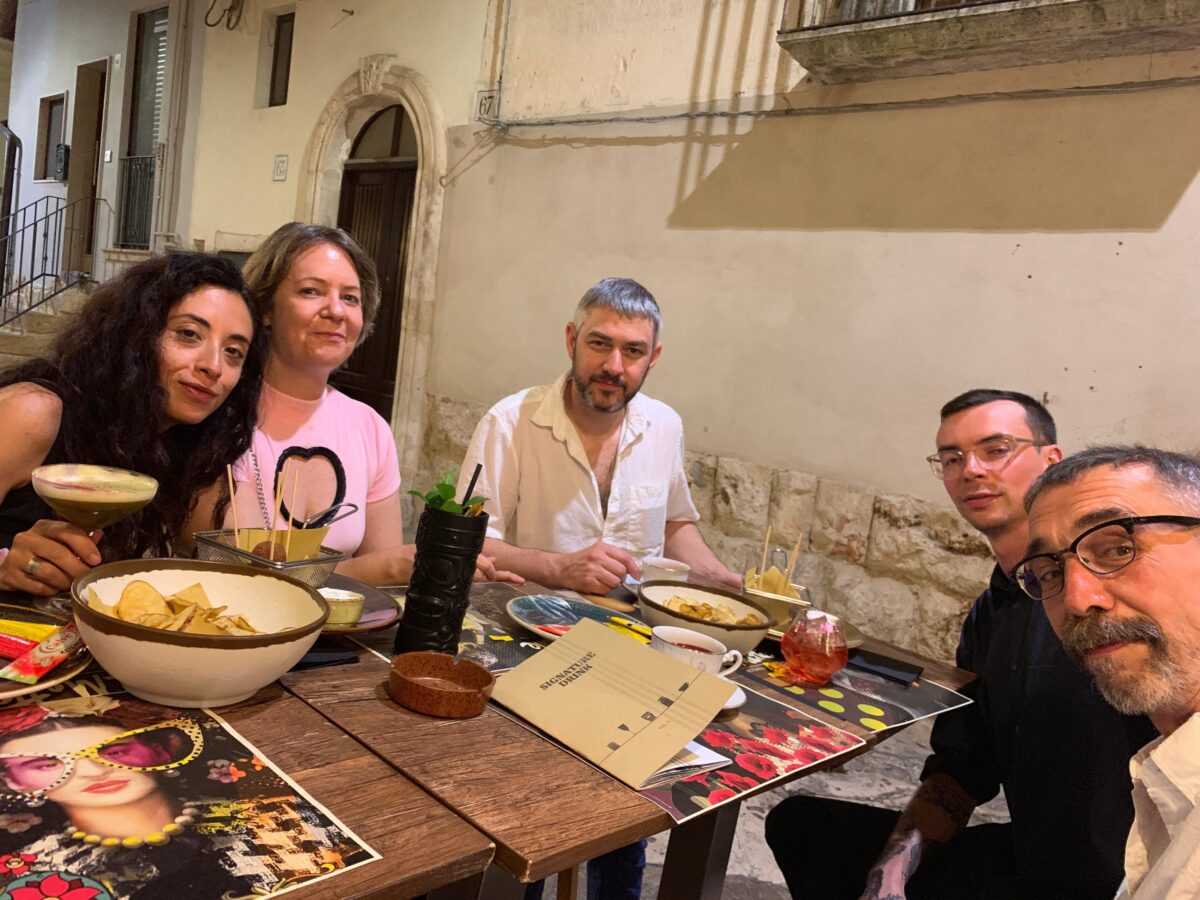 A Lover by Ben Spiers

“A Lover is an expression of my on-going preoccupation with the ambivalence and ambiguity of the ’inner-life’. It’s getting harder and harder to feel like the monarch of one’s psyche. My sense of solidity is constantly being reshaped, threatened, and enlarged by the tidal wash of virtual possibility flowing from my phone. I don’t think that’s a bad thing, though – one’s just got to improvise, like a surfer carving a line through a lumpy wave. My instincts tell me what to grab: some glassy tears, glossy lips, backlit hair – and the deeper mystery of painting transforms them; makes them truly belong to each other, and, just for a second, holds back the tide to reveal something more elemental – something that sticks, gluey in the mind; like an uncanny rock that’s only revealed on the very lowest of tides.”

“I made the slightly crazy decision to drive to Matera from London. I set off from London 20 hours after crawling home, elated, but exhausted, from the opening of my solo show at Carl Kostyal gallery.

I had been working in a fever the weeks leading up to the opening and wasn’t entirely in my right mind. As the miles ticked away and I wiggled over the passes of the Alps,  Northern Europe began to disappear and the roads were flanked by flowering Oleander bushes and Cyprus trees. The browner and hotter it got, the further I felt from the red-eyed midnights in my London studio.

The masseria itself is one of those buildings that owns the landscape. It sits on the edge of a plateau and the landscape drops and waves away to the horizon in a series of dramatic swoops.

The light is extraordinary. During the day it can be almost painfully bright, with a whitish haze, but as the evening comes on it takes on a crystalline clarity and a surprising warmth.

The enormous warehouse/studio is a really atmospheric place to work. It damps the heat and light to manageable levels and the muffled sounds of people swimming in the pool is great background music.

I found it a really easy place to slip into my work and the hours flew. I managed to finish the underpainting on 6 pictures, produce numerous drawings and even do some writing. My time there felt charmed, and work flowed out in an effortless way.

Fausta and her brother Gia-Lo are the most astonishing hosts. Within hours it felt as if we’d been friends for life, and after the month I knew that they are people to whom I will always feel close. They are generous, creative, funny and loving; as warm as the landscape in which they live.

The long evenings of talking, talking, more talking, card games, occasional dancing, drinking of ‘papa Joseph’  and one post midnight 5k run through the fields were some of the most pleasurable of my life.

Anyone lucky enough to spend time on this magical residency will have something wonderful to look back on, but more importantly, they’ll have friends for life in one of the most beautiful places in Europe.”

“The matera residency was a totally unique experience in my life, I will always remember it. At its heart, it is about being in Fausta’s world at her Masseria. Fausta is someone who cares about and invests in artists unconditionally, and whose support felt really life altering and special. This part continues to resonate, I think she will be in my life for a long time. During my month in Matera I spent a lot of time thinking, reading and editing, and talking to Fausta, to her family and friends, and to the other wonderful artists on the residency. It was a time to get some space from the production cycles of making work (though I did make some videos in the beautiful Italian countryside!), to think about things as a larger picture, and to experience another culture in a way I would never have been able to in another context. The residency also began with a week of parties and beach time when a larger group of artists and friends visited the residency which was really fun. I am so grateful for this experience, it was just so beautiful, I still can’t believe I got to be there, and I’m still thinking about everything I saw and learned there.”

“Time is one one the most valuable resources that can be afforded to an artist. Time to think, experiment, make mistakes, watch a 32 year old Italian farmer chase flies with an eclectic death paddle… Time is a precious resource, but it isn’t finite, it can be made from nothing by removing something. During my month long stay in Matera, I was given time, for the first time in a long time.

Finding ways in which to fill the long summer days seemed to be impossible. I’d toil around in my studio in the morning, working on small passages of a painting or burning through drawings in my sketchbook. I’d wander out to peak over Ben Spiers’ shoulder in an attempt to understand his methodically masterful approach to underpainting. I’d find myself sitting poolside with Sara Cwyar, helping her squeeze lemons over her increasingly blonde hair before we went to the dinning hall to put back multiple servings of cavatelli. I’d listen to Peter Schyuff riffle off romanticized stories about underdog life in a gritty 80’s New York, interjected with startlingly informed questions from an ever studious Gina Beavers. All this, and it’s just barely 4pm, a time marked daily by the first round of drinks, brought out by our incredibly generous host and the owner of the masseria, Fausta.

She made this time for us by removing the commutes, the chores, and the stress filled inconveniences of normal life. I can’t thank her enough for that. I plan to make this masseria, and these people, a reoccurring part of my life (as long as I keep LETTING Fausta beat me at cards I don’t think it will be a problem).

Also, thank you Carl Kostyál, the ambidextrous marionette master who put us all in this puppet show.”