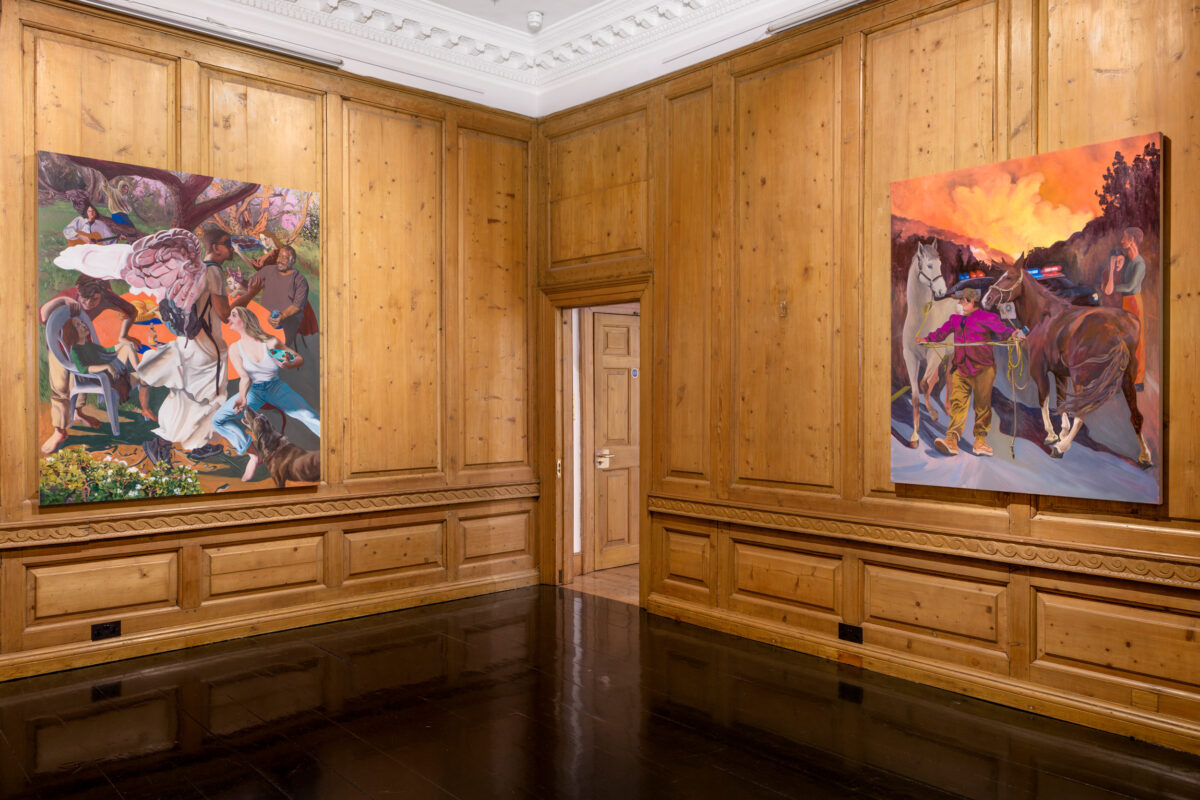 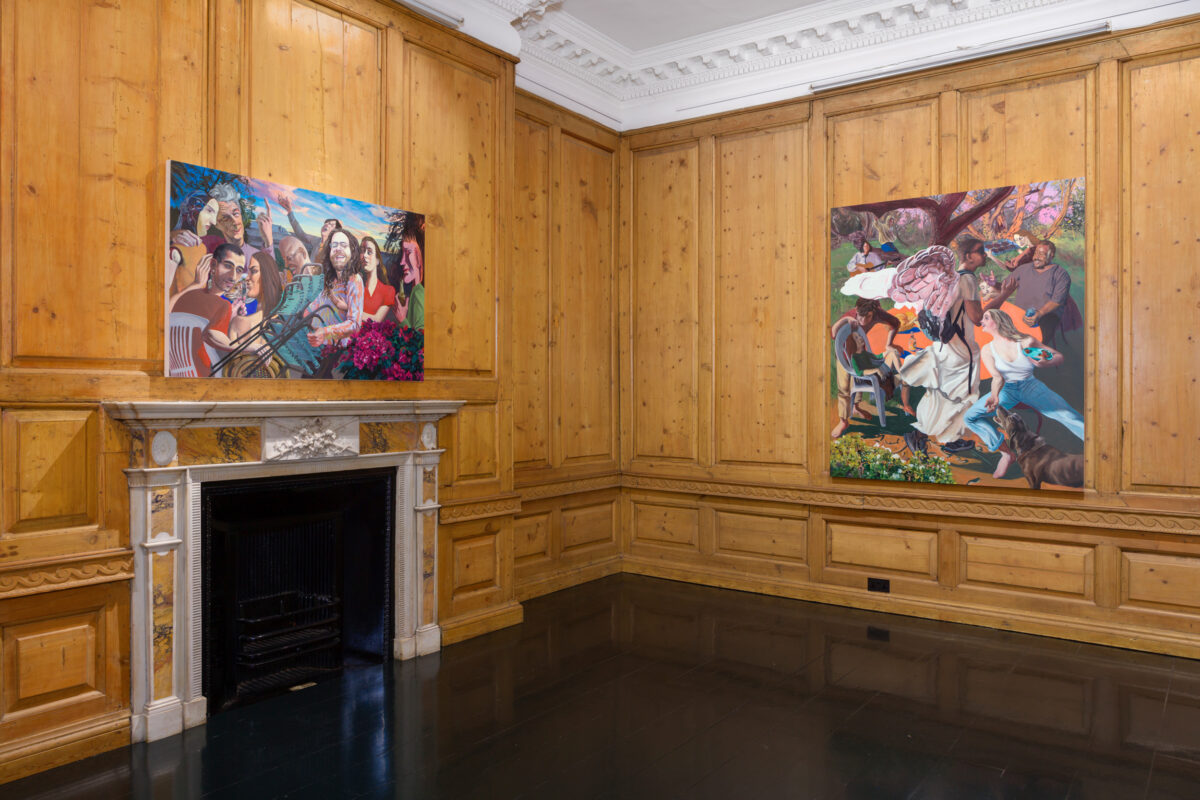 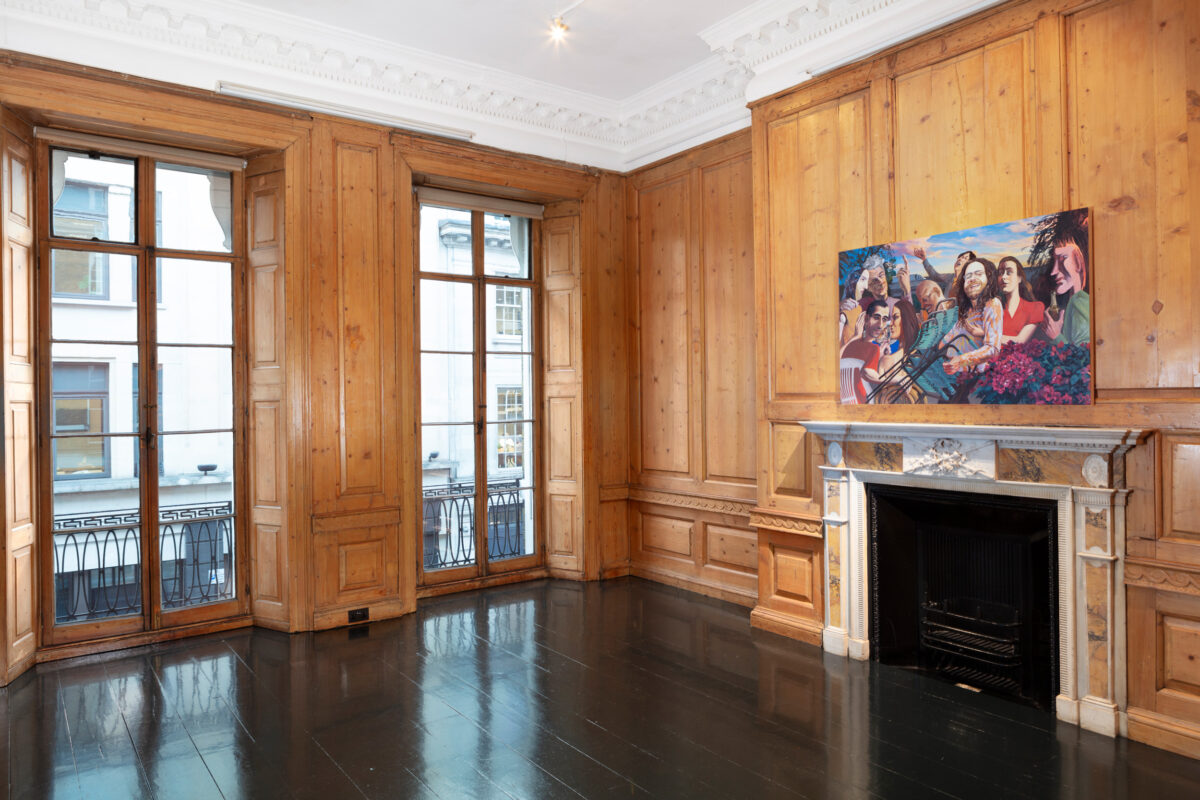 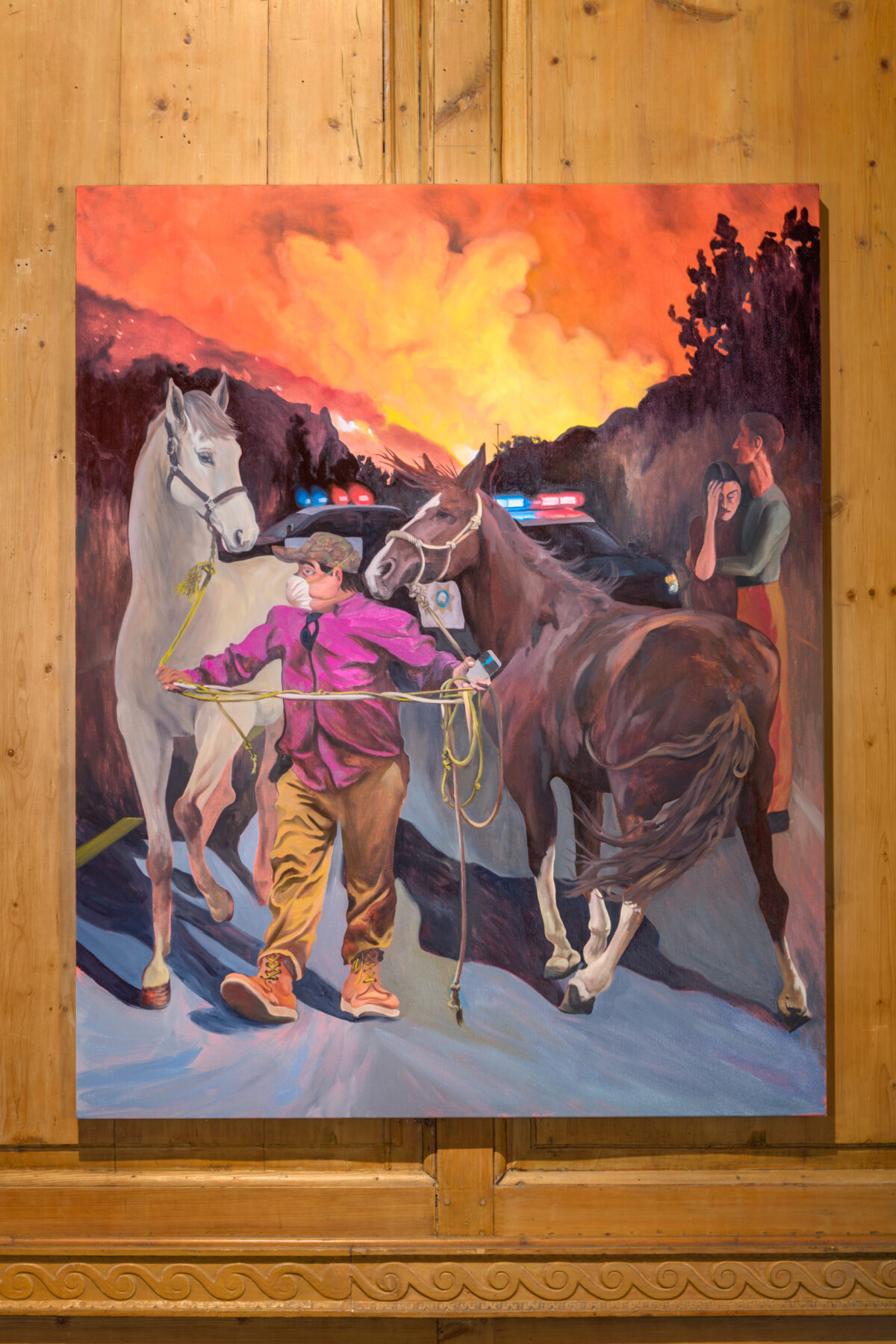 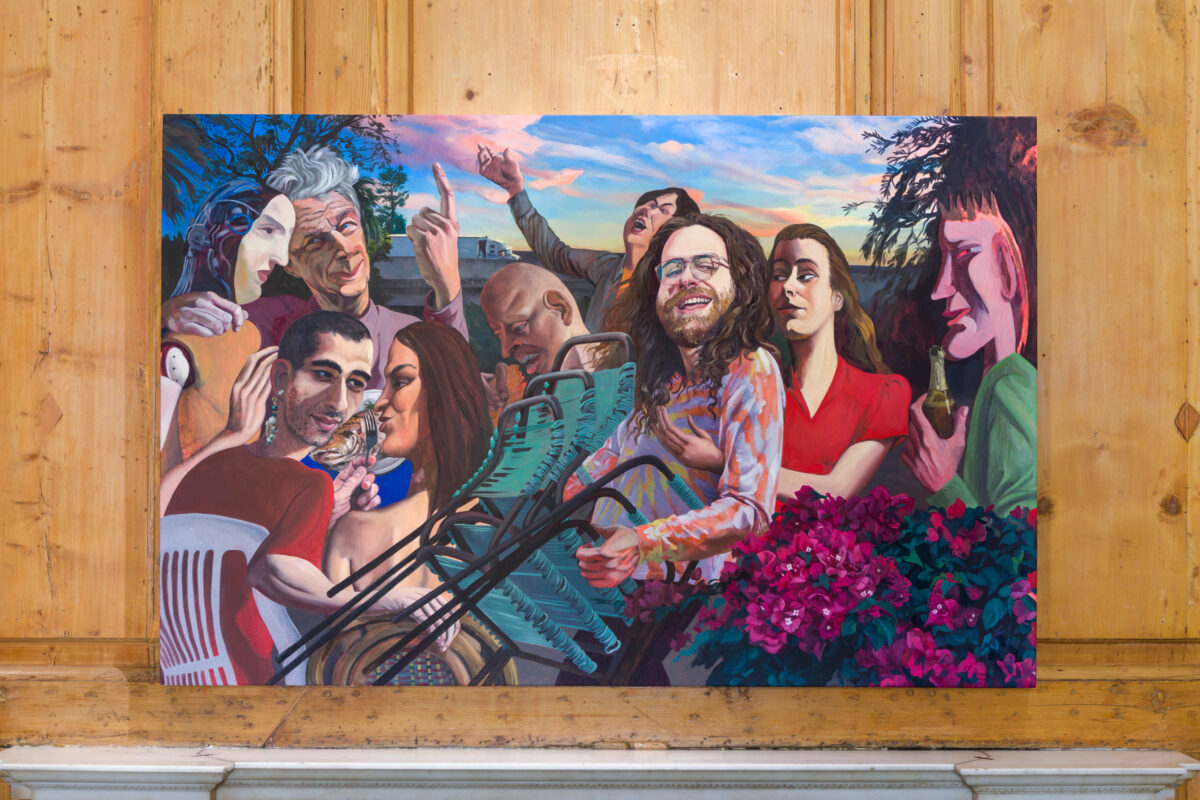 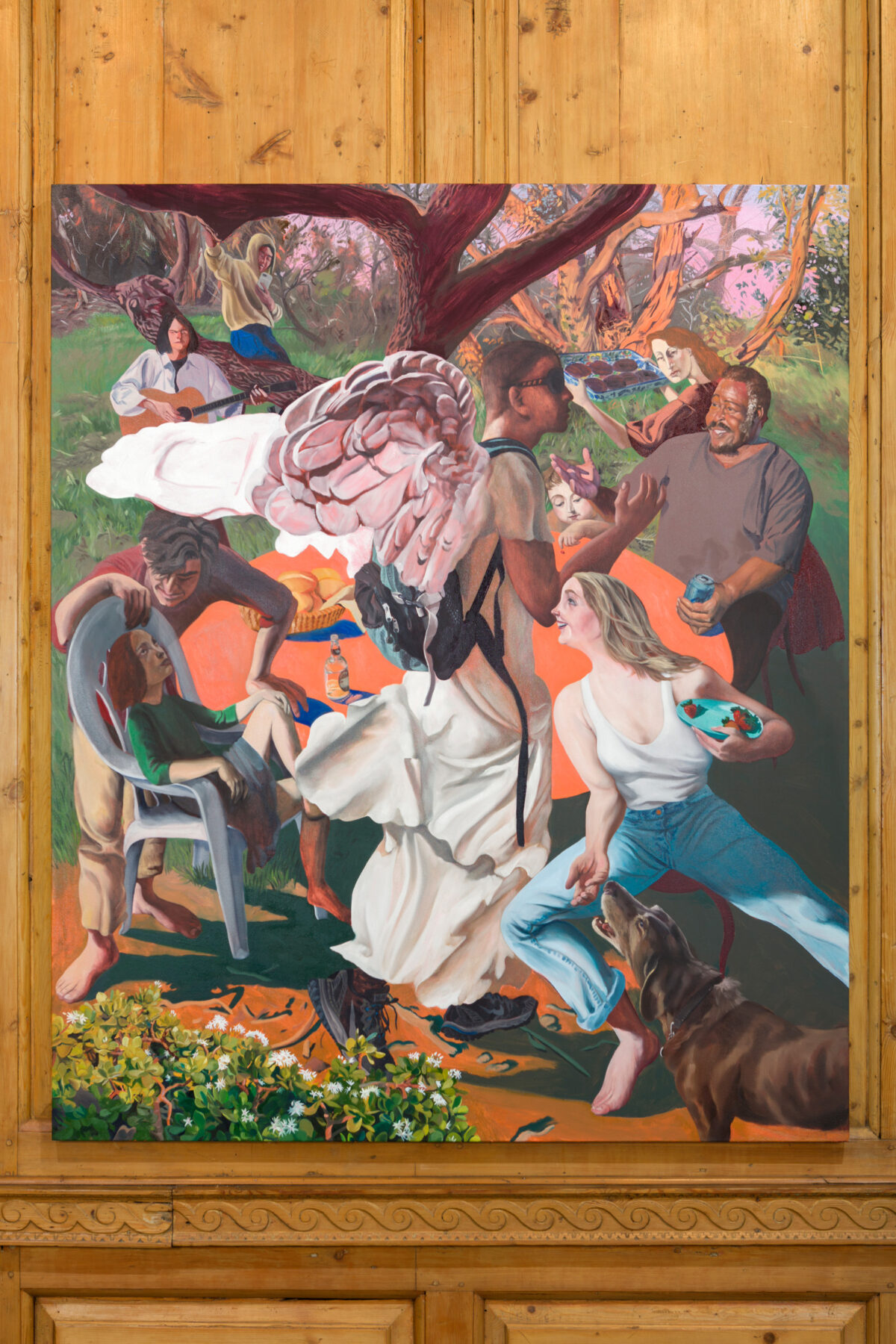 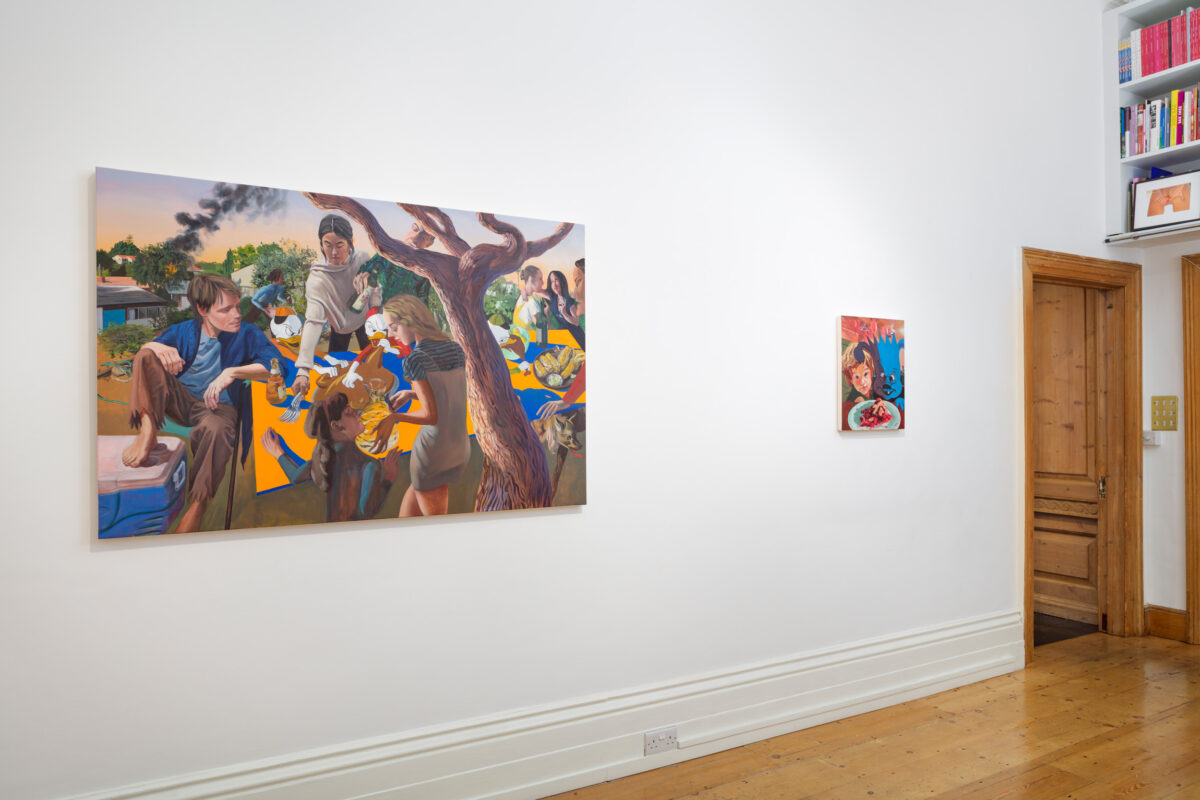 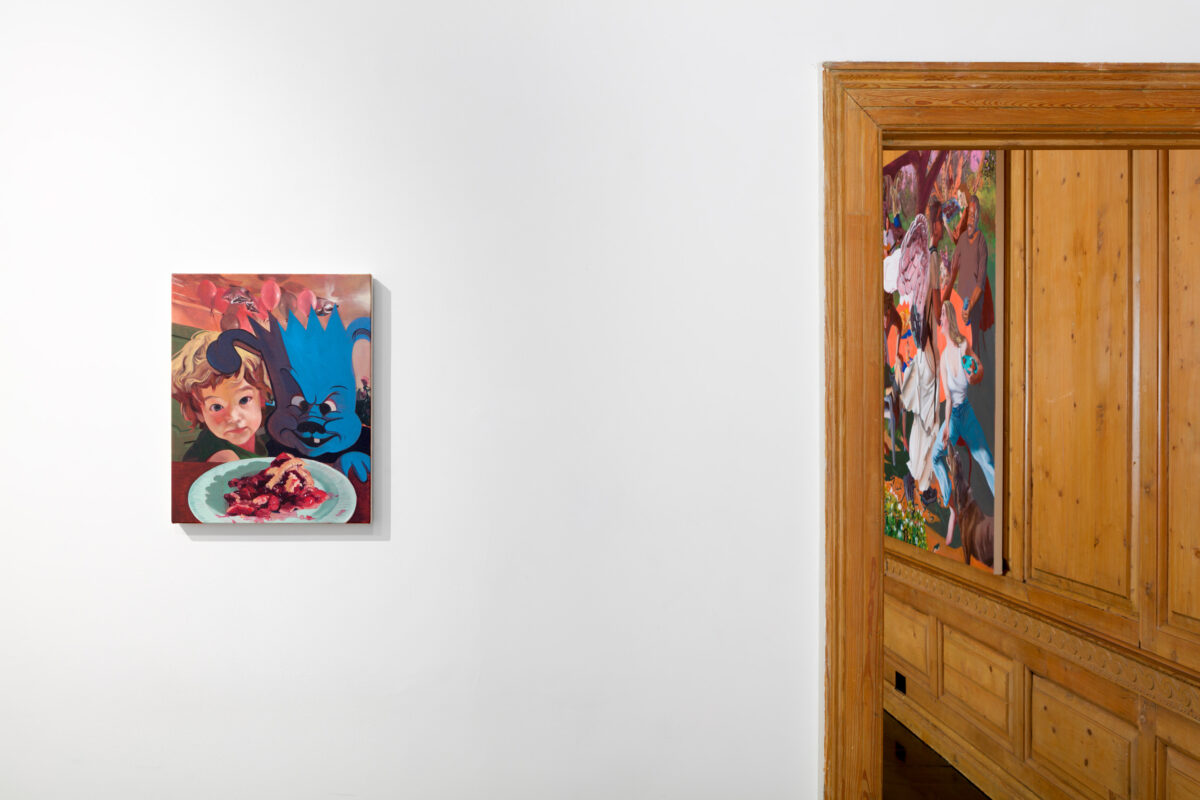 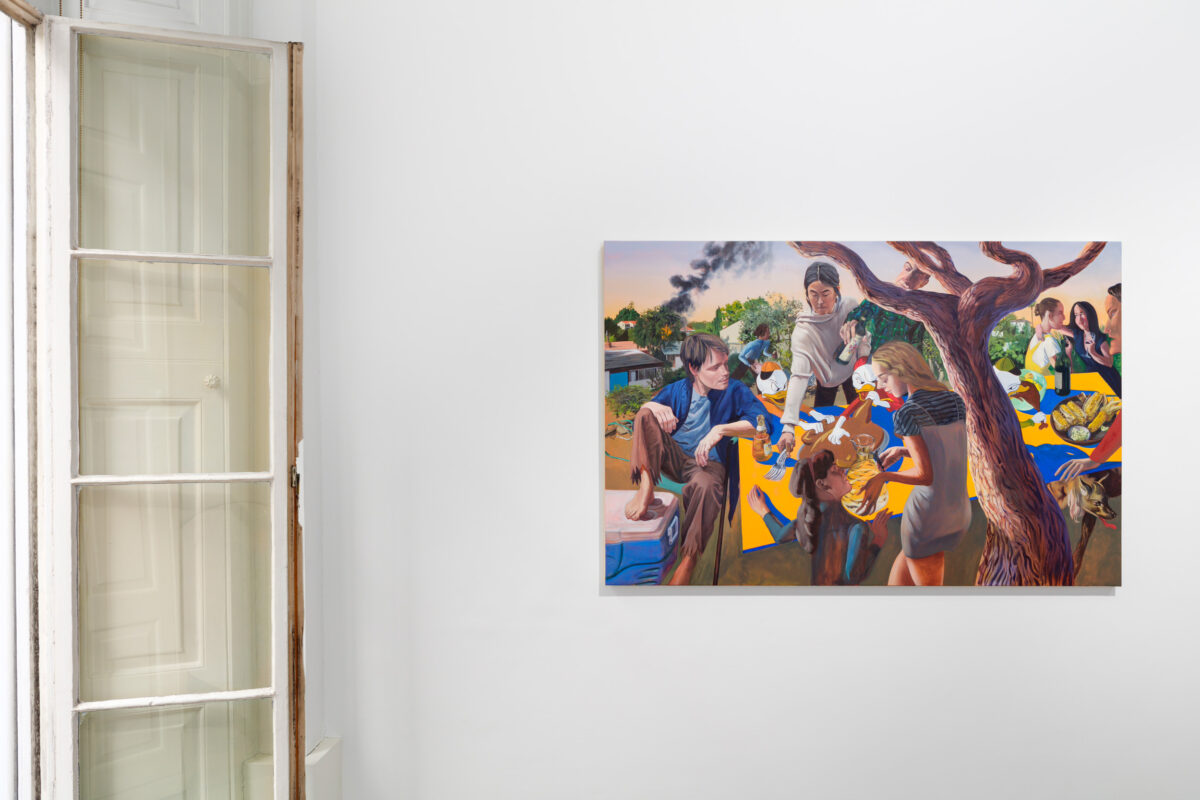 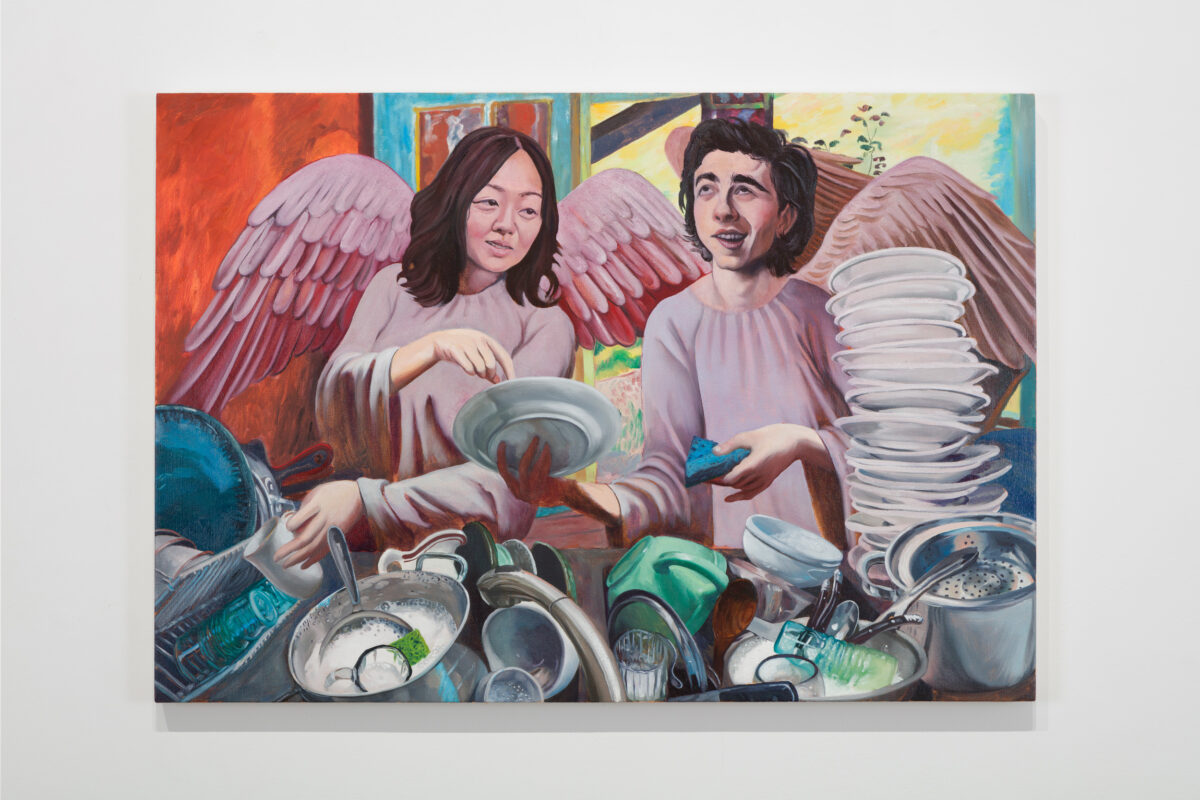 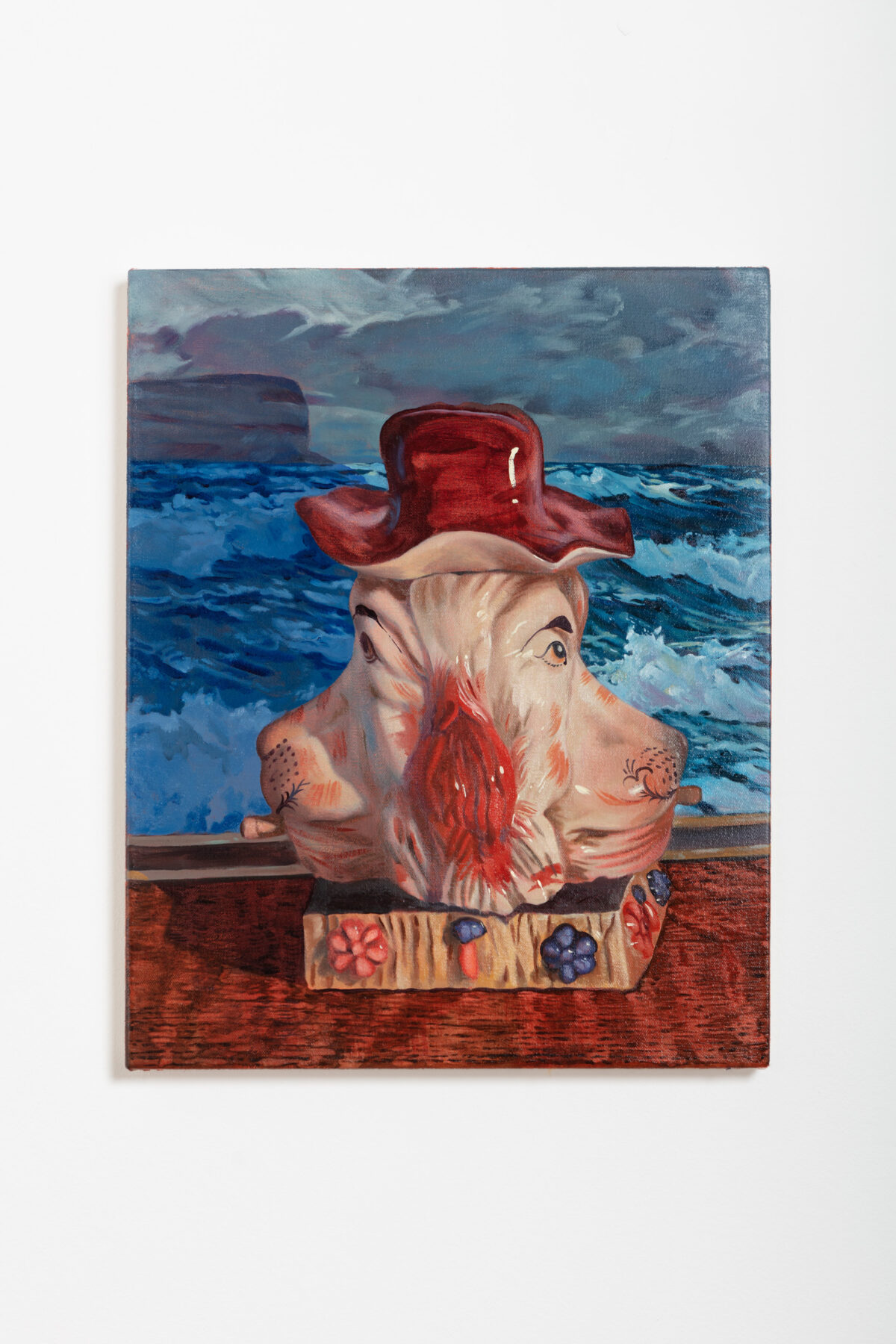 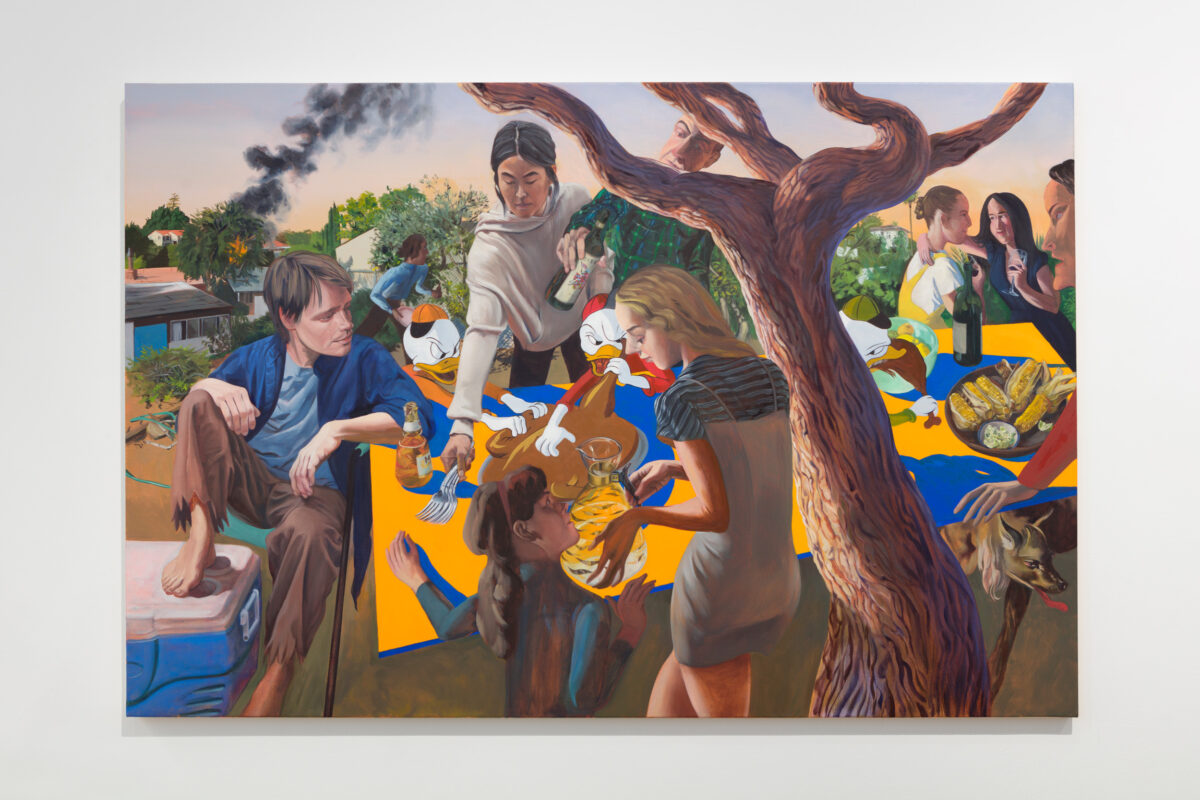 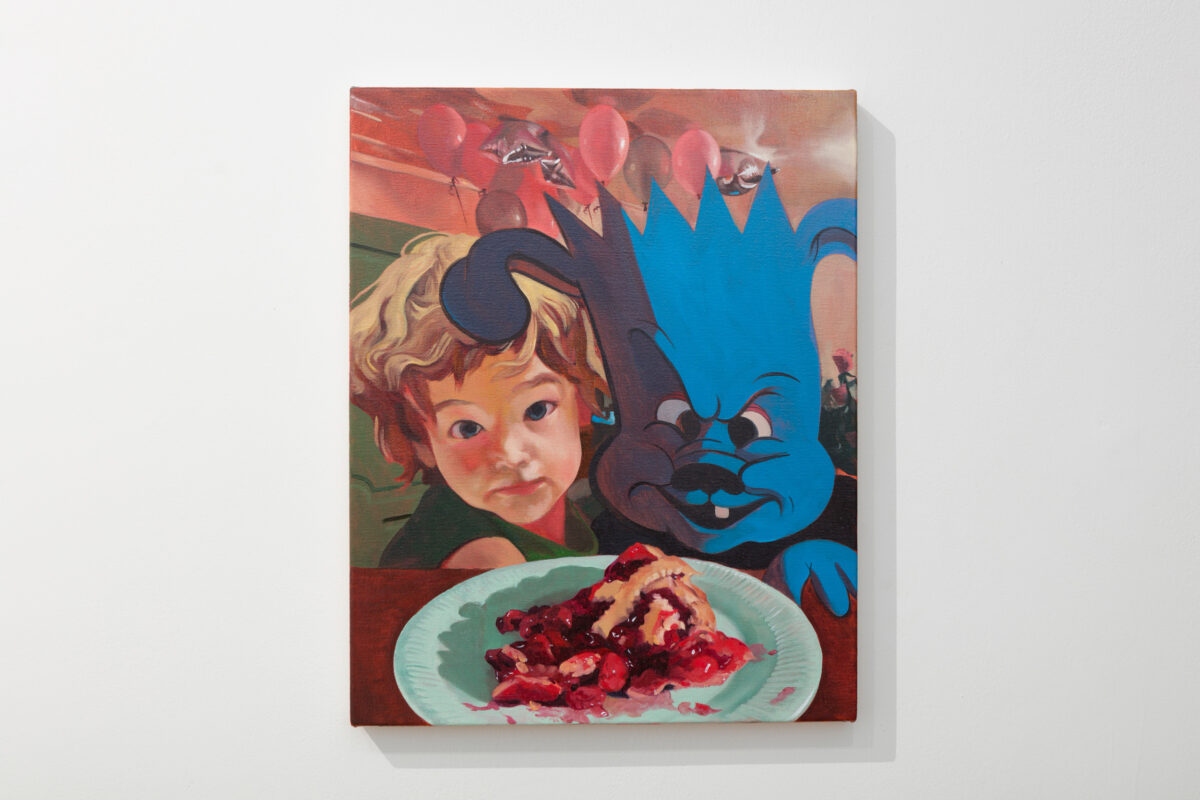 In Justin John Greene’s latest body of work, visions of heaven and hell are brought down to earth, in a manner that feels contemporary yet timeless. Focusing on his home of California, this new collection of paintings blends fantasy with reality, defying popular representations of the state as a modern-day utopia. While commonly associated with the promise of glamour, wealth, and sunshine, the lived experience for most Californians is much more precarious and complex. Greene explores this tension and collapses the corporeal and celestial realms to depict a new space where these elements interface.

The artist’s distinctive painting style combines aspects from social realism, German expressionism, Dadaism, religious iconography, and American animation, among a diverse range of sources. His reference points are equally vast, leaving room for the viewer to create their own connections between subject matter. In preparing a composition, Greene pulls photographs of friends, family, and his surroundings for inspiration, as well as found and popular imagery. He adds his own invented characters and landscapes, resulting in a visually rich tableau with nuanced details.

In ​Lost Angels (​2019), Greene portrays a group of people—both real and fictional—seated among a table in a backyard gathering. A young man donning a robe, wings, backpack, and sneakers walks among the party, taking central charge of the scene. If he’s an angel and this is heaven, then it sure does feel familiar. Greene leaves this open to interpretation, creating a vision of paradise that appears convivial but curiously commonplace. ​Woolsey Fire (​2019), by contrast, addresses a recent local tragedy, reflecting on the dystopian dimension of the Golden State. Using documentation from the 2018 wildfires as source material, the work is another record of this major event. While current news and social issues have always informed Greene’s process, such an explicit reference marks a turn in his practice.

In the aftermath of the wildfires, California Governor Jerry Brown declared that we are living in “the new abnormal”—where horrendous natural disasters spurred by climate change are increasingly prevalent. Although it is difficult to have faith in such turbulent times, we remarkably continue forward and prevail. Greene’s works display an anxious tension, with disparate figures shown in various states of action. Whether engaged in the day-to-day, a celebration, or modes of crisis, we relate with these characters and the environments in which they are placed—neither heaven or hell, but ​A Warmer World​ they must navigate.