To delve into the fantastical world of Bozó Szabolcs, born in 1992 in Pécs, Hungary and known simply as ‘Szabi’, is to encounter a cacophony of wild cartoon-ish animal figures, extravagantly colourful and full of an apparently untrammelled sense of mischief and joy. But these are not the familiar, Western icons of animation. No Mickey Mouse or Bugs Bunny here. His brushwork belongs to a post-war gesturalism, their shoes to 18th century cobblers’ creations. Something is not quite as it seems.

In truth these creatures are born in part out of the rich history of Hungarian animation, which has, from its auspicious beginnings in the 1910s, drawn on Hungarian folklore and mythology for its inspiration, with morality tales and the grotesque being the dominant aesthetic in those early days, later giving way to a fertile if constrained period in the 1950s when the industry was nationalised by the Communist state, eventually moving toward a focus on anxiety and claustrophobia in the 1970s and finally exploding into its heyday of iconography, clearly still heavily influenced by the preceding years, in the 1980s. It is this very specific Hungarian cultural legacy that informs Szabi’s lively cast of lovable characters.

In the 1950s, political pressures of the time strongly dictated the topics animation could cover. There was a deep suspicion across Communist/Socialist countries from Sweden to China of American resources and technology in the field and how they co-opted animation in particular to propulgate a positive image of the West and by contrast of course, a negative one of the East.
A combination of the Hungarian state’s investment in their national animation studio Pannónia and the undisputed skill and inventiveness of Hungarian animators saw the studio rise to major international renown, competing with American animation giants Walt Disney and Hanna Barbera. Hungarian folklore and traditions, the country’s famed artistic and musical legacy and the colours of the national costume infused the eccentric and colourful cartoons produced in this period, fostering a sense of national pride through a creative celebration of the country’s legends and history that was potent enough to compete with this American/Western narrative, if not even better it.

These tales and characters endured even once the Wall came down in 1989 and independent animation studios sprang up, using bold irony and allegory to portray the Hungarian condition under Communist rule and pushing the boundaries of technical experimentation with plasticine, sand, coal, textiles and computer animation.

This is the aesthetic formation of Szabi’s paintings, absorbed by osmosis if not intent, along with the hand-puppets, first-generation computer games, comics and fables still ever-present in the Hungarian television programmes of his childhood, such as the well-known ‘Little Mole’ or the lesser-known ‘Süsü the Dragon’ which share some of the trippy and home-made qualities of the famous BBC children’s series of the 1960s, ‘The Magic Roundabout’ but which are informed by a rather more sinister history. The artist doesn’t simply replicate these figures of a uniquely Hungarian ‘pop’ culture, he extracts the melancholic, retro character of his animals and transforms them anew via an unabashed celebration of painting.

In 2022, Bozó will have at M Woods Museum, Beijing in May, as well as a homecoming presentation at Art Market Budapest alongside works by Austin Lee and James Ulmer with Carl Kostyál in October. 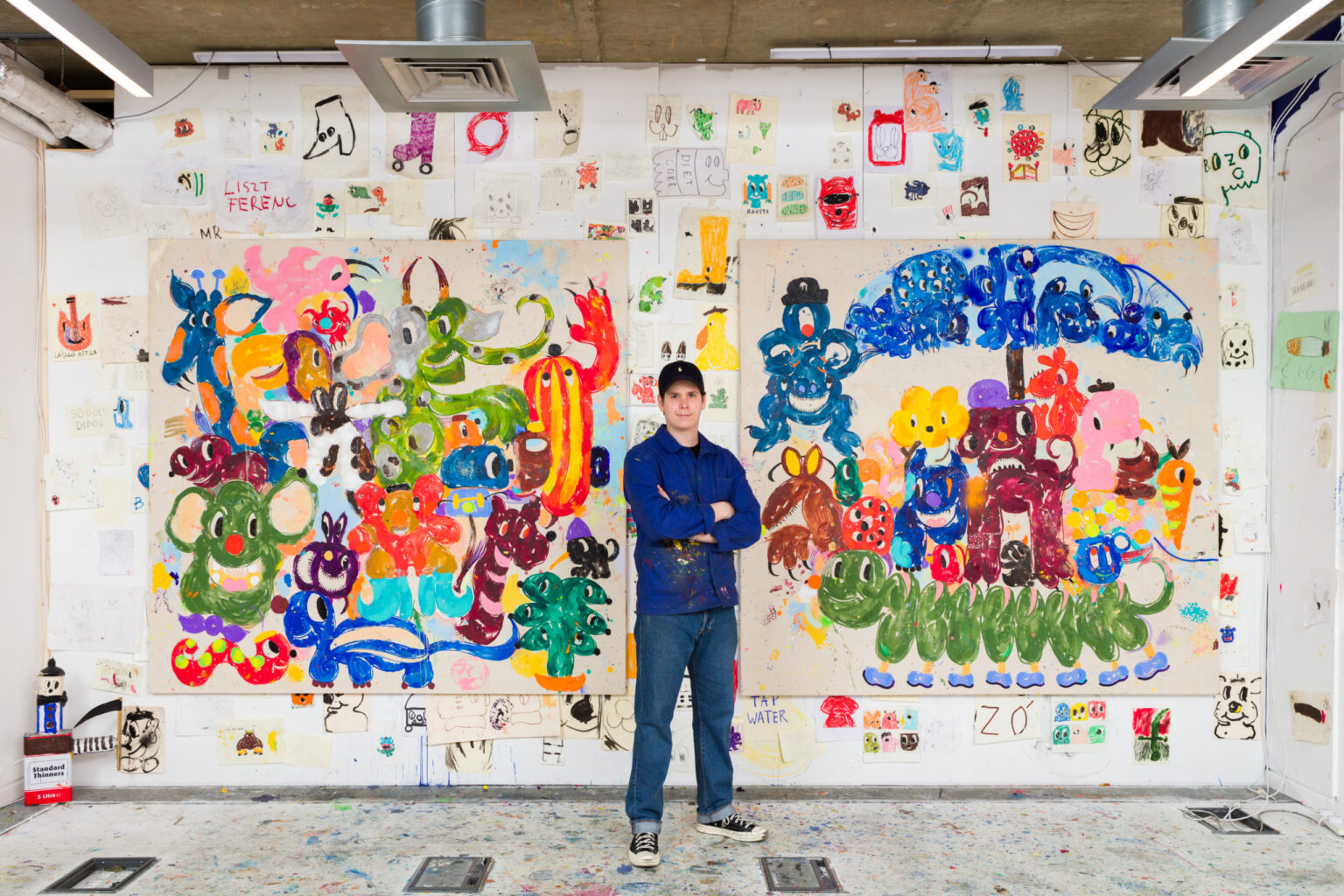 Who is this 30-year-old Hungarian artist whose comic-like paintings are paid the price of a Rolls-Royce? | Forbes

Inside the Market: Szabolcs Bozó’s Playful Paintings Are Selling for Serious Sums at Auction | Artsy