One of the very first artists to explore and adopt digital technologies in his practice, Austin Lee creates his paintings and sculptures in VR, using Oculus Rift’s ‘Medium’ as his initial paintbrush, working in a purely virtual space he has described as being “like a blue void that feels infinite.”

The whimsical, often tragi-comic figures and compositions that emerge from this imaginary studio nod to the legacy of Surrealism, Colour Field painting, Pop Art and the history of animation, as much as to the emojis and digital idioms that have become part of our daily visual vocabulary. His process however retains a classically painterly approach. He re-creates these image-ideas by hand, with an airbrush, acrylic and spray paint on canvas, on the surface of his sculptures and in his animated short films, which he builds up painstakingly using a combination of early animation techniques and current animation technology. Virtual reality is just that for him – it is an enabler of, but does not substitute, his painterly methodology.

“3D modelling has helped me explore light in the paintings – I used to be really into the flatness of Photoshop and digital drawing, but that’s slowly been changing for me over the years. 3D modelling makes it easy to simulate light and that has been super exciting to me as a painter. It helps me visualize space and light on unreal things. Kind of like making a maquette or clay sculpture or sketch to work out an idea. I am really interested in the overlap between digital and physical objects and it’s exciting to make translations back and forth between mediums with a specific work.” Austin Lee.

His art-historically loaded motifs – the dove, the horse, the flower, the young girl, mother and child, the old man, the painter – are depicted in deceptively simple form and in flattened spatial depth. His subjects appear to weightlessly float in a hallucinatory bath of colour, morphing out of the picture plane to become whole in sculptural and animated form. The relationship between his virtual drawing, his animation, his painting and his sculpture is constantly evolving, as he pushes the possibilities of each medium.

Born in Las Vegas in 1983, Austin Lee received his MFA from Yale in 2013. He currently lives and works in New York City. 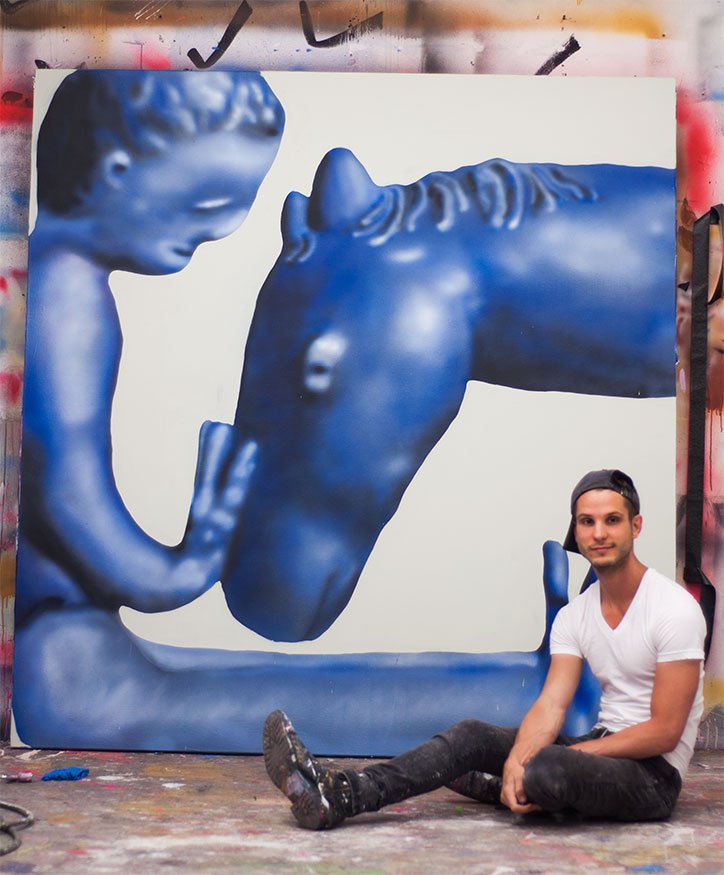