Arghavan Khosravi was born in Tehran, Iran in 1984 and she lives and works in New York.

The defining characteristic of Khosravi’s exquisite paintings is contradiction. Her paintings are vehicles for the expression and containment, actually and metaphorically, of a host of contradictions and seemingly unresolvable tensions.

Formally and stylistically the works are at once traditional, experimental, conceptual, illustrative, flat and constructed. In their visual semiotics they blend East and West, past and present, reality and the surreal. In the hands of a lesser artist such a mélange could have descended into the vapidly postmodern (in the crudest understanding of the term). Here it is intentional and neurotically powerful. The visual baseline of Khosravi’s universe is a fearful instability.

This intensity is biographical in origin. Khosravi explains: “I was born soon after the Islamic Revolution… My paintings describe the double life I led throughout my childhood and teenage years, adhering to Islamic Law in public (ex. being forced to wear a headscarf, to pray and recite the Quran at school), while still being able to think and act freely in private.”

Now based in New York and having been unable to return to Iran for fear of being denied re-entry to the US due to its immigration policies, Khosravi describes her paintings as creating “a space to recast memories and process paradoxes of my childhood in Tehran, and ground my perspective as an Iranian now living in the US.”

This psychic and geographic dislocation finds formal expression in physical divisions and the juxtaposition of collaged elements in several works here. Entrapment, a smaller sized painting that brings to mind Persian miniature painting, a tradition that Khosravi is a strange heir to, is divided into quadrants. A young woman looks out at us, at once confident and wary. On the right-hand half she is dressed in contemporary fashion, on the left her face becomes, seemingly, a digital model of itself, features erased, articulated in neon-pink. Her shoulder and upper arm meanwhile are reduced to a ghostly white and transparent outline. A picture of a self, divided and only uncertainly present. Uniting the two sides is a thin red cord, starting as an earphone on the right, ending in the mouth of a Chinese dragon on the left.

Red cords, painted and actual, are a significant leitmotif in Khosravi’s work representing “the lines drawn by theocratic power.” Whereas in typical art discourse lines are innocent formal elements – Paul Klee – ‘A drawing is simply a line going for a walk’ – here they reify the repressive underlying ideology that structures the world of Khosravi’s paintings, viscerally recalled from her experience of growing up in a climate of private freedom and public censure.

In ‘The Glow’ they, albeit loosely, bind the figure’s wrists together. In ‘Connection’ another earphone cord becomes a red line of unsought inherited connection to the distant, patriarchal past, manifest as a painting of a classical Roman statue. In ‘Insomnia’, an astonishingly accomplished painting, the ersatz subject, with human arms and a statue’s head, lies bound by a lattice of red cords onto a hostile bed. The decoration of its bedcover has come to life as a menagerie of now threatening zoomorphic forms. Nowhere is safe.

For contingent cultural reasons Persian miniature painting evaded the censure of figuration common to Islamic art. An essentially private art form in terms of ownership and display, the miniatures were enjoyed and shown by their owner as they wished. Their intimate size embodied the luxury of choice. With subtle skill Khosravi overturns this conceit. After the memory of that tradition is filtered through the lived experience of Iran’s oppressive theocracy, that luxurious intimacy becomes psychologically claustrophobic.

In the sadly beautiful ‘Let me talk’ a young woman’s face, elegantly modelled and painted, is literally divided and compartmentalized, her nose and mouth and thus power of speech lost to an underlying void, crisscrossed with the red rope of repression. In their psychological honesty and persistent commitment to beauty nonetheless they are, perhaps, emblematic expressions of grace under pressure. Courage in painted form.

Arghavan Khosravi (b. 1984, Tehran, Iran) lives and works in New York. She received her MFA at Rhode Island School of Design, and previously earned a BFA in Graphic Design from Tehran Azad University and an MFA in Illustration from the University of Tehran. 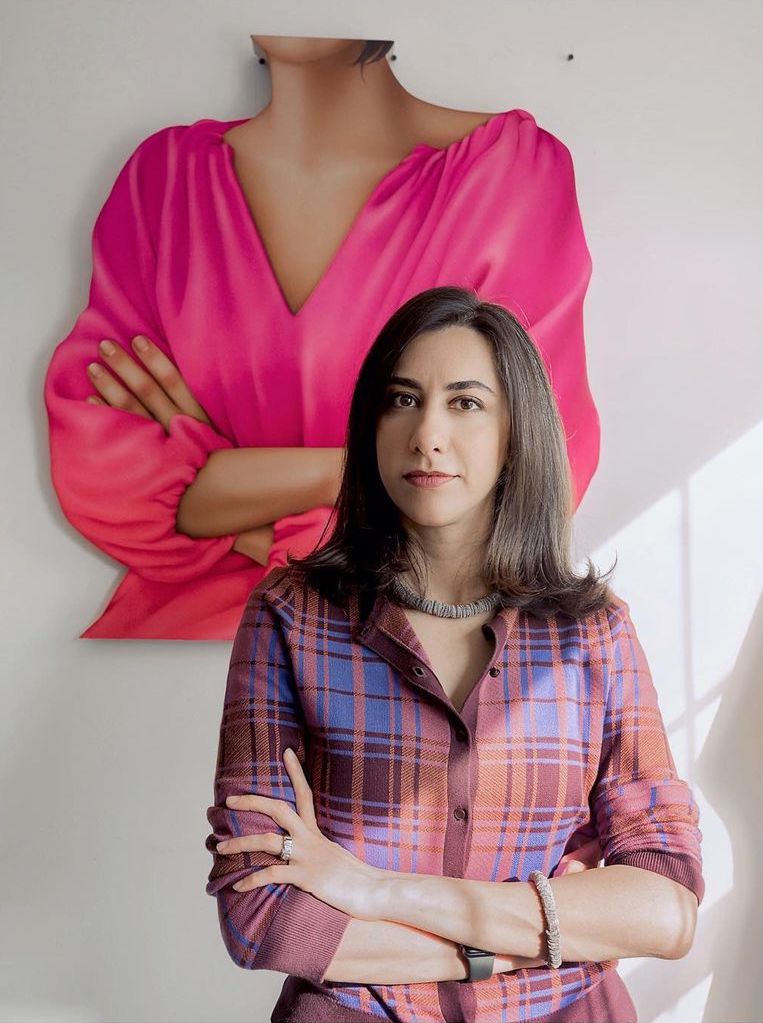 In Search of Possibilities of Hope: Arghavan Khosravi at Carl Kostyál, London | Juxtapoz

‘I Felt in Between Places’: Iranian Artist Arghavan Khosravi on Studying Art in the U.S., and Why She Paints Preoccupied Women | Art Net