According to official sources, Ana Barriga Oliva was born on September 10th, 1984 in the rural district of Cuartillos , belonging to Jerez de la Frontera (Cádiz , Spain) . However, other unofficial sources assure that the identity of this supposed ‘Jerezana ’artist is really an old quinqui -kitsch extraterrestrial baroness coming from other worlds and in contact with humanity since immemorial times (it’s said that she has been in contact with civilizations such as the Sumerians , the Mayans , theIncas or the ancient egyptians), a theory to which I believe more in with the time.

According to official sources, after her studies in cabinet making and arts applied to stone (at the art schools of Jerez and Seville) she graduated in Fine Arts from the University of Seville, studies which will culminate in 2015 with the Master ‘s degree ‘Art: Idea and production. Before finishing her degree, in 2013, she held her first individual exhibition through the scholarship Iniciarte. ‘Panel de control would be the first of many others individual exhibitions such as ‘The man and the wood’ (2015 , Birimbao Gallery , Seville), From animals to gods’ (2019, Andalusian Center for Contemporary Art, Seville), ‘Mani’ (2020, Kristin Hjeldelger Gallery , London ), ‘Robots , dinosaurs and cookies’ (2021 ,Padre Gallery , New York ) or ‘+10V3’ (2022 , Vollery Gallery , Dubai).

Many other collective exhibitions and fairs (including ARCO, MACO, Art Busan, Kiaf, Basel Miami or Basel Hong Kong) have led her to show her work throughout Spain, the United States, England, Germany, Italy, China, Korea and Mexico. In addition to the recognition through almost 40 awards such as the Andalucía Government’s own ‘Iniciarte’ scholarship (2013), ‘Generations’ of the Montemadrid Foundation (2019 ) or the prestigious award ‘BMW innovation’ (2021) and Pop Eye (2022)

However , you can accuse me of being a conspiracy theorist , doesn’t it seem strange to you that in less than ten years since she graduated, Ana Barriga has been able to carry out more than 40 exhibitions and having participated in almost 30 fairs (including ARCO, MACO, Art Busan, Kiaf, Basel Miami and Basel Hong Kong) all over the world? They have already tried to convince me, but They couldn’t.

I could bet that her original nature is not human.

Now think about something you might not have been aware of; Barriga’s work starts from those objects found in flea markets, porcelain and old objects. Pieces that seeing by human eyes can go completely unnoticed, but that in the eyes of a ‘outer space’ creature can be a tremendous interest: surviving objects from past ages of an alien civilization that, ripped from their primitive context reach a new era, becoming communicating vessels between two times, between two contexts.

For those extraterrestrial eyes that observe this phenomenon, it will raise not only a series of concerns and anthropological interests, it would open a debate about what could suppose those objects in their past and in their present, being able to reach conclusions. Ana Barriga has come to confuse a peanut with a God (in her exhibition ‘Mani ‘ in London ) or to introduce Donald Trump as a mystical being or deity within of a polyptych where confusing references from different cultures are intermingled (in its exhibition ‘De Animales a Dioses’ -whose title is quite revealing – at the CAAC, Seville).

Returning to that anthropological interest aroused by those objects that Ana Barriga finds in the flea markets, it is without a doubt, how she treats them through painting, one more evidence of its extraterrestrial origin. The genre most used in her work is still life, by the inert character of what is represented.

As if in a challenge against art history, Ana Barriga disturbs the precepts of the genre, filling her still lifes with life through chromatic, formal elements and the very composition of the work. She achieves a vitalist, playful aesthetic, in which she underlies those obsolete objects; a kind of wrecks, decadent remnants of a past time that Ana rescues in an exercise in cosmonautical archaeology , to give them a new context.

Finally we come to the clearest evidence that Ana Barriga really is an alien. In this new context in which she reinterprets these found objects, she realizes an irreverent game in which it seems that human life is viewed from outside. At ‘otum revolutum’ where the Dionysian is confused with the Apollonian , a game in which the emotions (passions, fears, joys) intermingle with elements; mystical, religious or ritual, in a cosmogonic and iconographic dance printed under a kitsch patina.

That irreverent attitude that sometimes reaches the category of quinqui. That attitude with which Ana Barriga sometimes, after an execution and invoice undoubtedly pristine, culminates the work with a large spray doodle that runs much of the work. The work and the signs that make it up end up being vandalized, sullied, by the artist herself.

The still life ends up being a portrait ; the portrait of a world that seems to be seen from the outside, as if life (and therefore painting), were not taken with that unwavering seriousness with which we human beings normally take it. 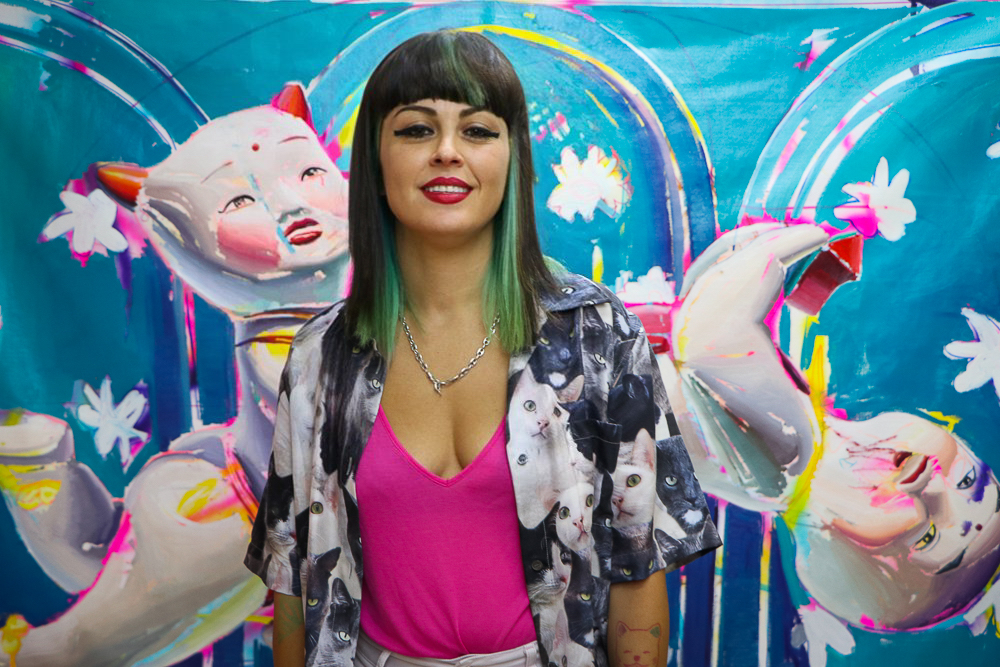